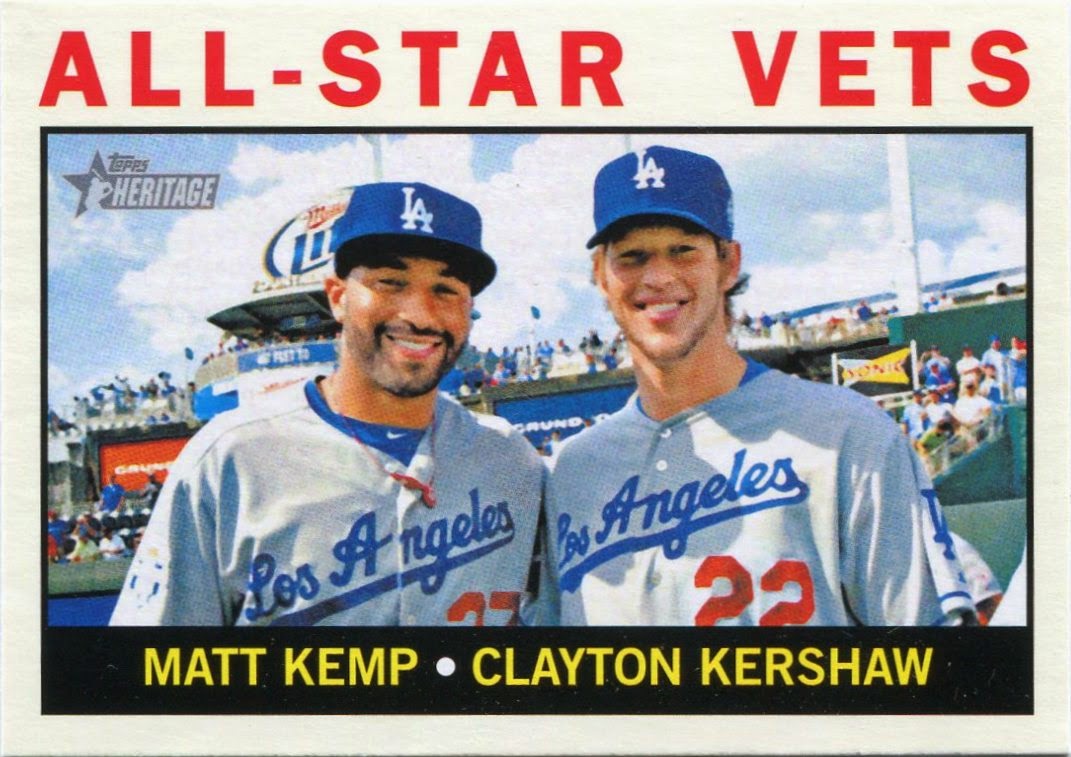 In case you missed yesterday's post, I took $20 to the local flea market this past Sunday.

The decision to do so came after a long and heated inner battle that almost resulted in me buying a blaster from the nearest Target.

Obviously, the flea market rules over pretty much anything I could find at my local big box store.

If that stupid blaster-minded part of me wasn't convinced by what I featured on the blog yesterday, it most certainly will after I get done with tonight's post.

Yesterday, I recapped ten bucks' worth of cards I found from three different vendors at the local flea market. That left me another $10 to play around with on Sunday.

If you go back and read pretty much any of the flea market posts I've written over the past two years, you'll find that I've raved quite a bit about one particular vendor that sets up around here. He has the highest quality dime boxes I've ever seen, and always cuts me an unbelievable deal on my final total.

I was about ready to bow down and thank the cardboard gods when I saw him back at the flea market on Sunday. I'd been going through dime box withdrawal, and I knew a dig through his dime cards would tide me over for a while.

This time, he had two dime boxes on display. One contained a little of everything, while the other was stocked with mostly newer cards. We'll start with the latter for now, and specifically the card you see above.

I'm not sure how such a great shot managed to fly under my radar for all of 2013, but I'm sure glad to have it in my binders now. 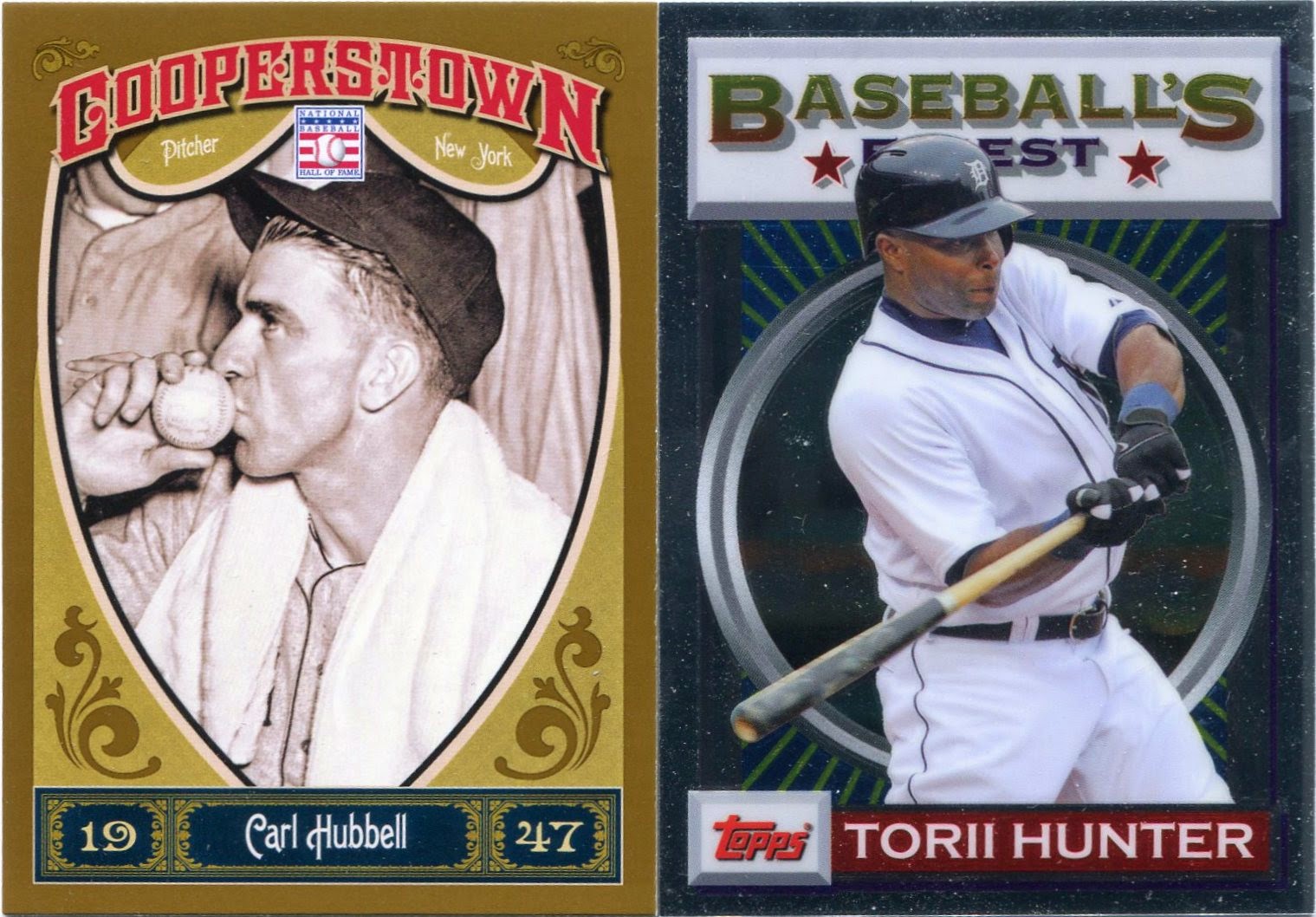 One thing I like about this guy's selection is that there always seems to be a father and son looking through his cards whenever I hit his table.

I can tell he tries to appease every kind of collector possible, and he has that friendly vibe that keeps me coming back to the flea market week after week.

A kid that couldn't have been more than nine or ten years old was going nuts over finding a shiny new card of Ozzie Smith when I was pulling out these two dime beauties for myself.

Seeing a kid get that much enjoyment out of a baseball card will always bring a smile to my face. 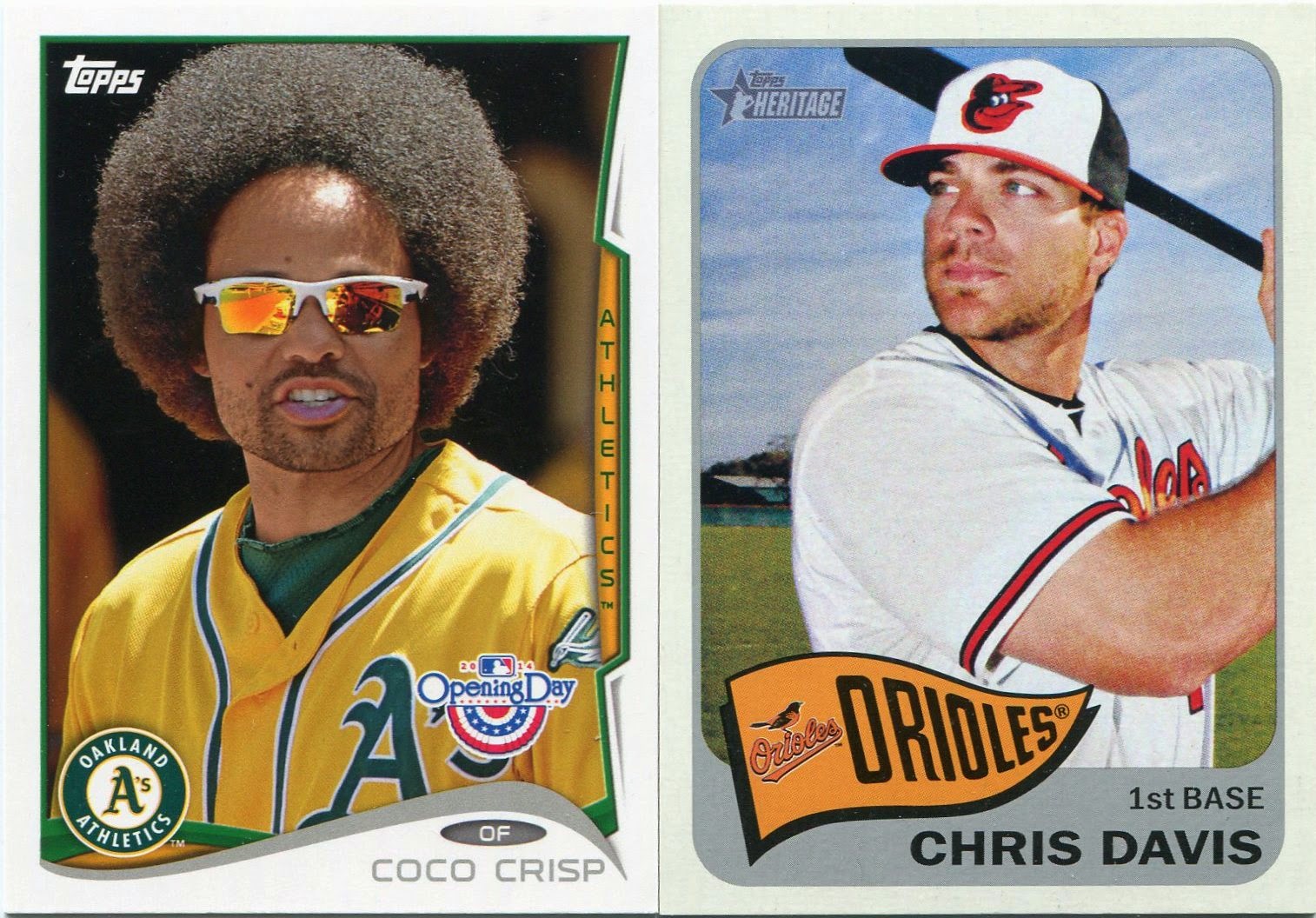 As will the sight of Coco Crisp's 'fro.

These were a couple other fantastic gets from the more recent dime cards on display. The Davis is a short-print from this year's Heritage, mind you. 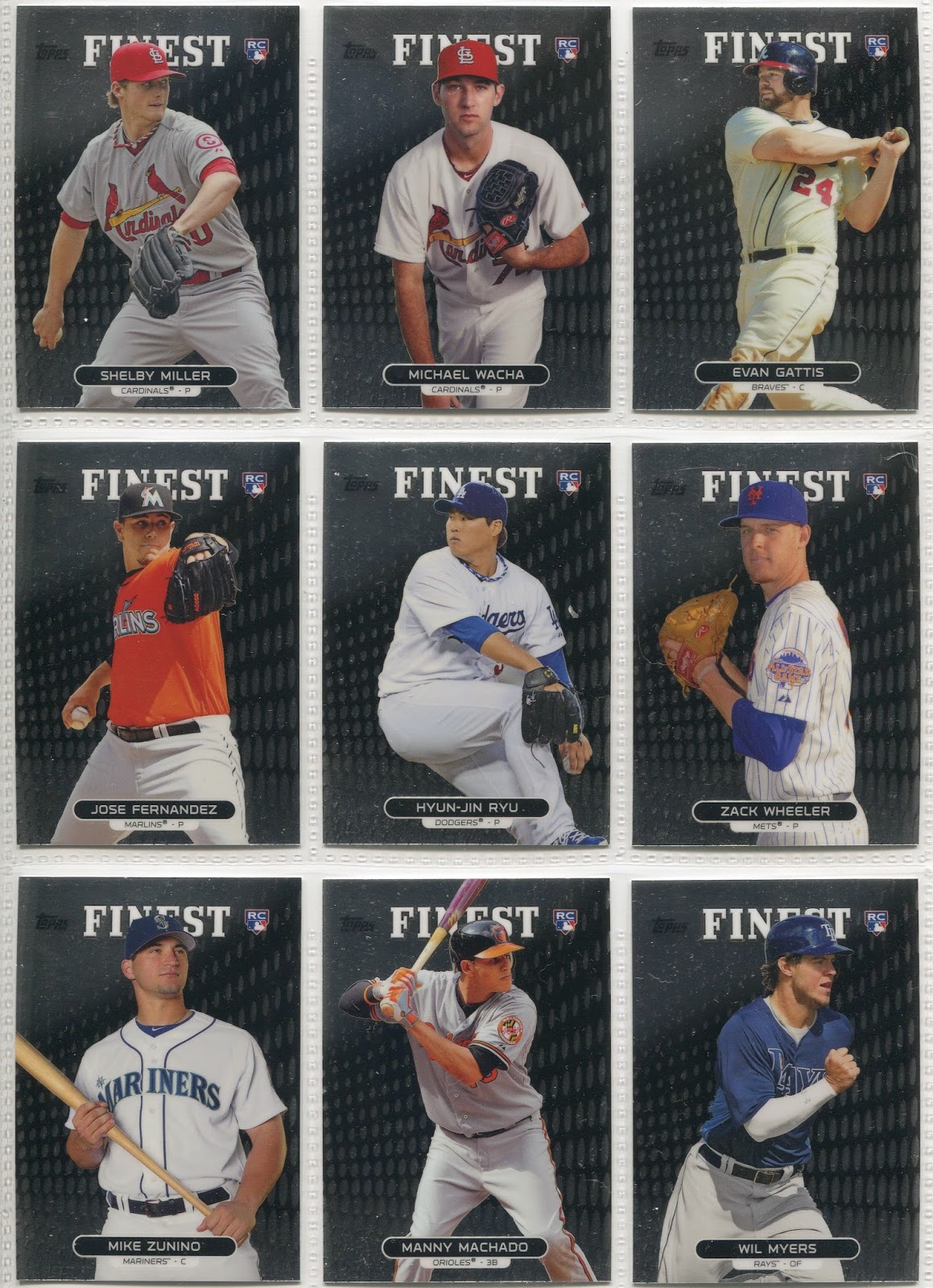 For the first time in a while, I actually liked the look of last year's Finest.

They've been surprisingly easy to find in dime boxes these past few months. This guy had a big stack of them ripe for the picking on Sunday.

I pulled a decent amount of veterans to go along with the nine rookies you see above, but man.

What an impressive crop of young stars.

Finding these for a dime a piece was awesome.

Shortly after I got through with the Finest, I spotted a big stack of cards that appeared to be a bit smaller than the rest. 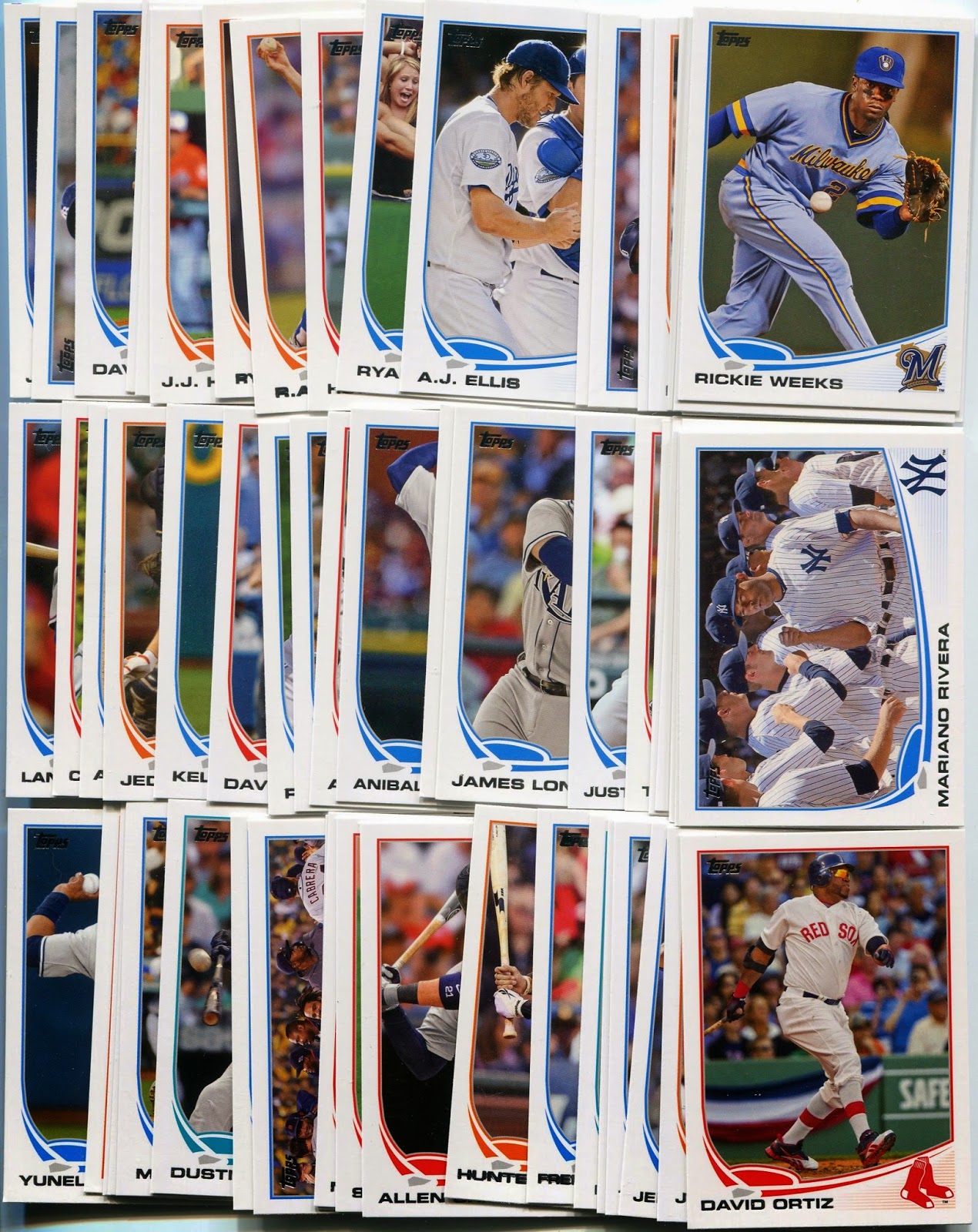 A WHOLE STACK OF TOPPS MINIS!!!!

I had been dreaming of finding a huge batch of these in a dime box ever since they hit the streets.

Had Topps gone the retail route with their mini release, chances are I would've dropped a good deal of cash on them by now. I'm a sucker for anything mini, and these look amazing next to their full-size counterparts in a binder.

But NOOOOO. Topps had to go and get all online-exclusive and leave small-budgeted collectors like me out of the picture.

What Topps didn't anticipate was the generosity of dime box vendors like the one at my local flea market. I'm not sure where he got such an impressive array of Topps Minis, but I could've hugged him for making them available at just a dime each.

I had an absolute field day with these puppies. After all was said and done, I plucked 60 of them for myself and quite a few for other bloggers as well. Among the finds were stars like "Mo" and "Big Papi".

Needless to say, these were the stars of the more modern dime box. 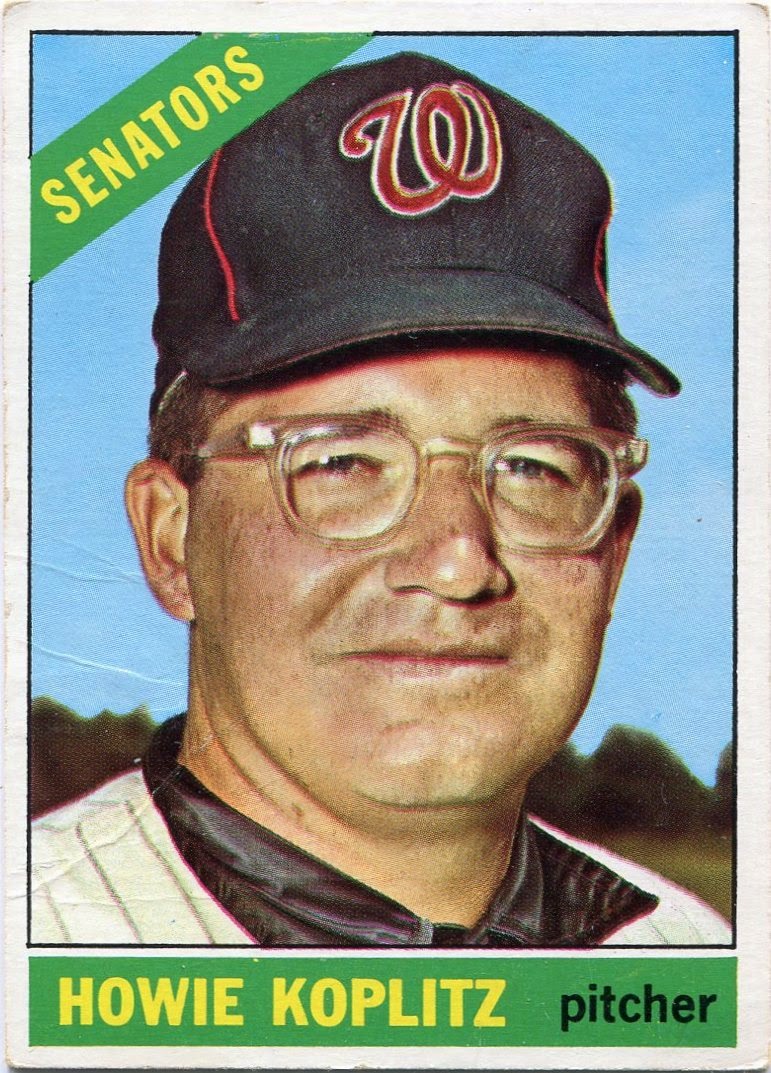 Heck, we haven't even gotten to the "little of everything" dime box yet.

I have never in my life encountered a group of dime cards that hit on so many different facets of the hobby. I know I throw around the "little of everything" term a lot, but this guy's dime box are always just that.

I have no idea who Howie Koplitz is, but I wasn't about to let an authentic Senators card slip past me for a dime. 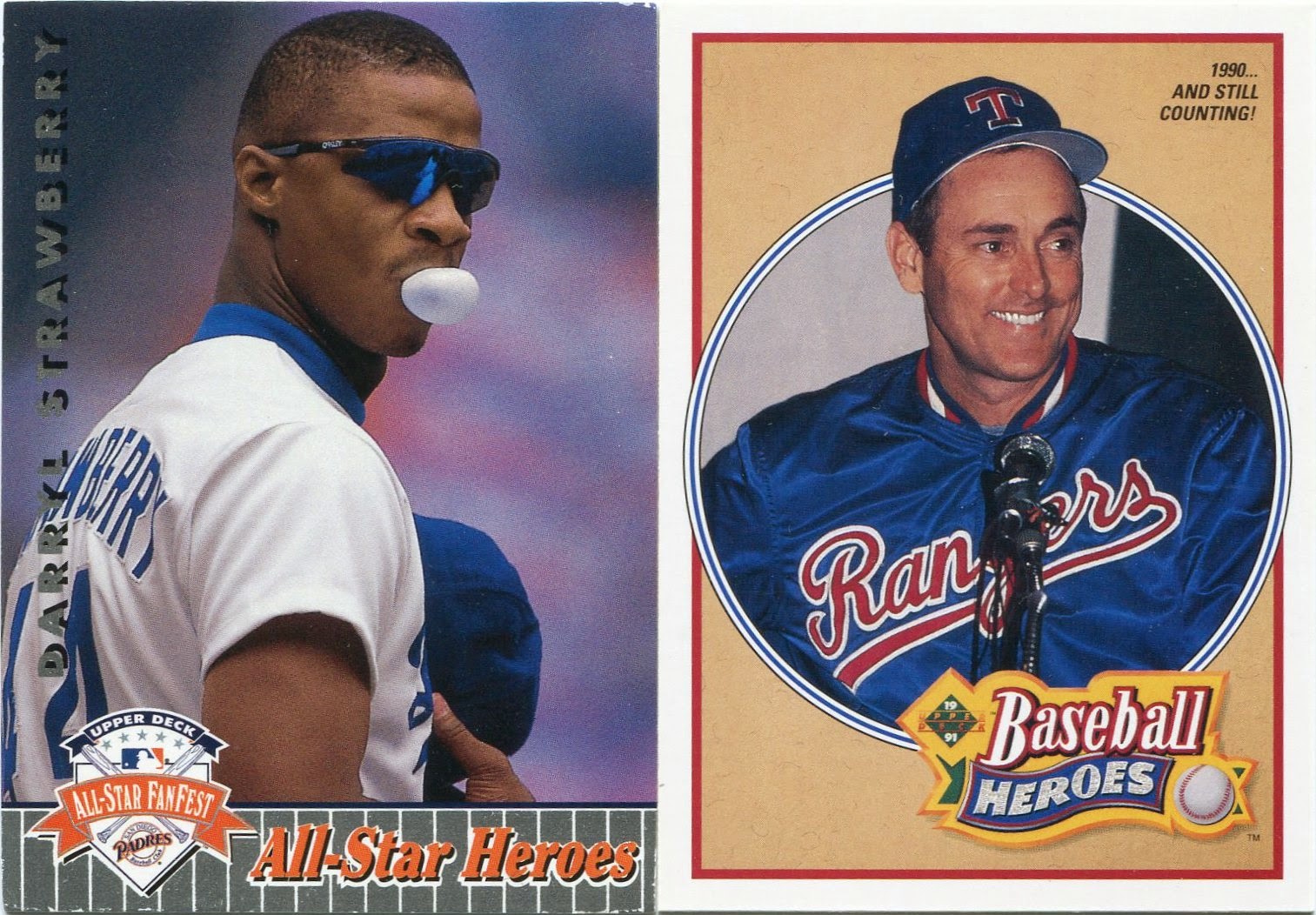 How about mini-collection hits?

My "anthemic" and "interview" themes were common suspects in this dime box.

Plus, Darryl Strawberry even has a little bonus bubble action going there. 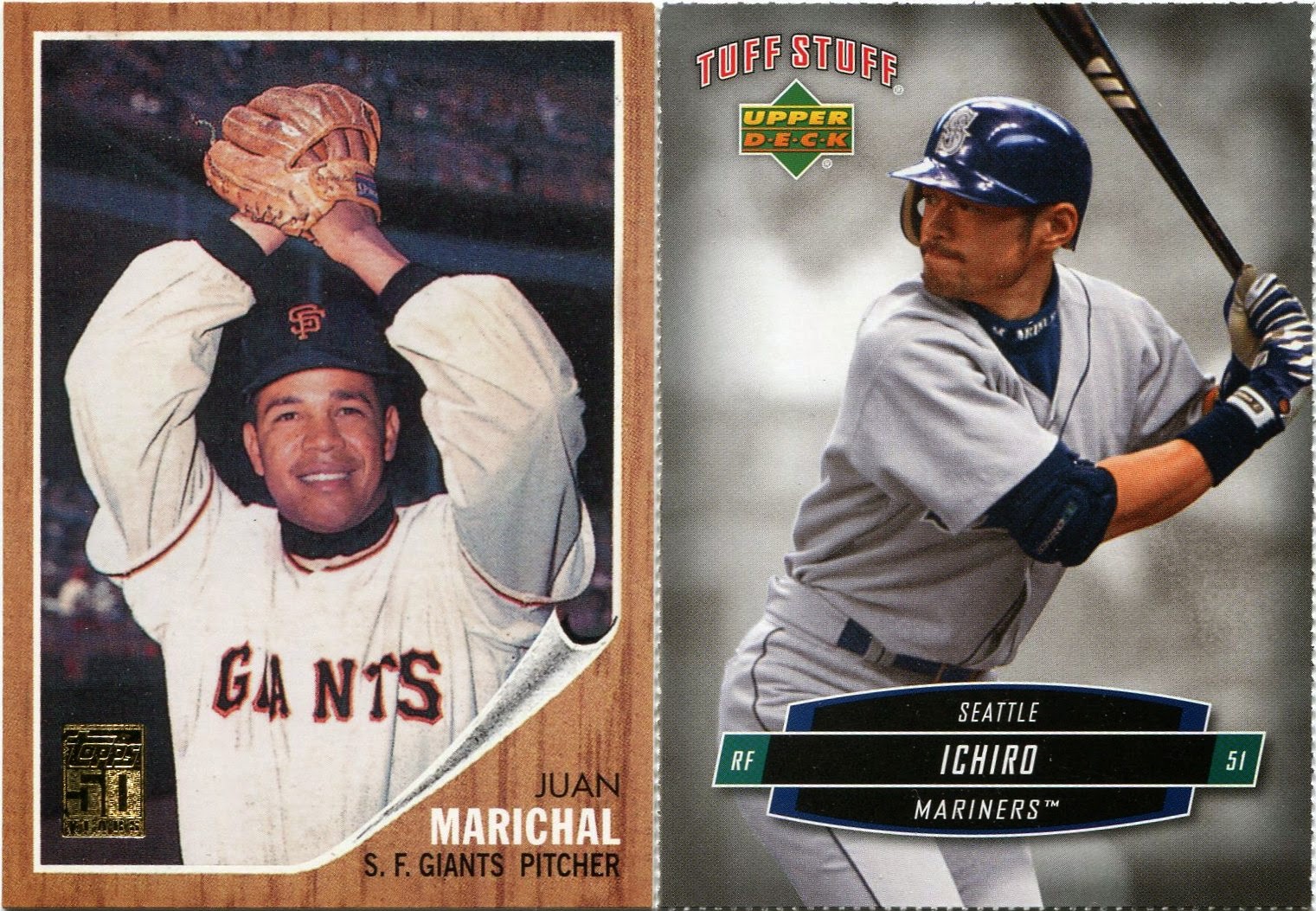 Two of my favorite things to find in a dime box.

He's got those, too. 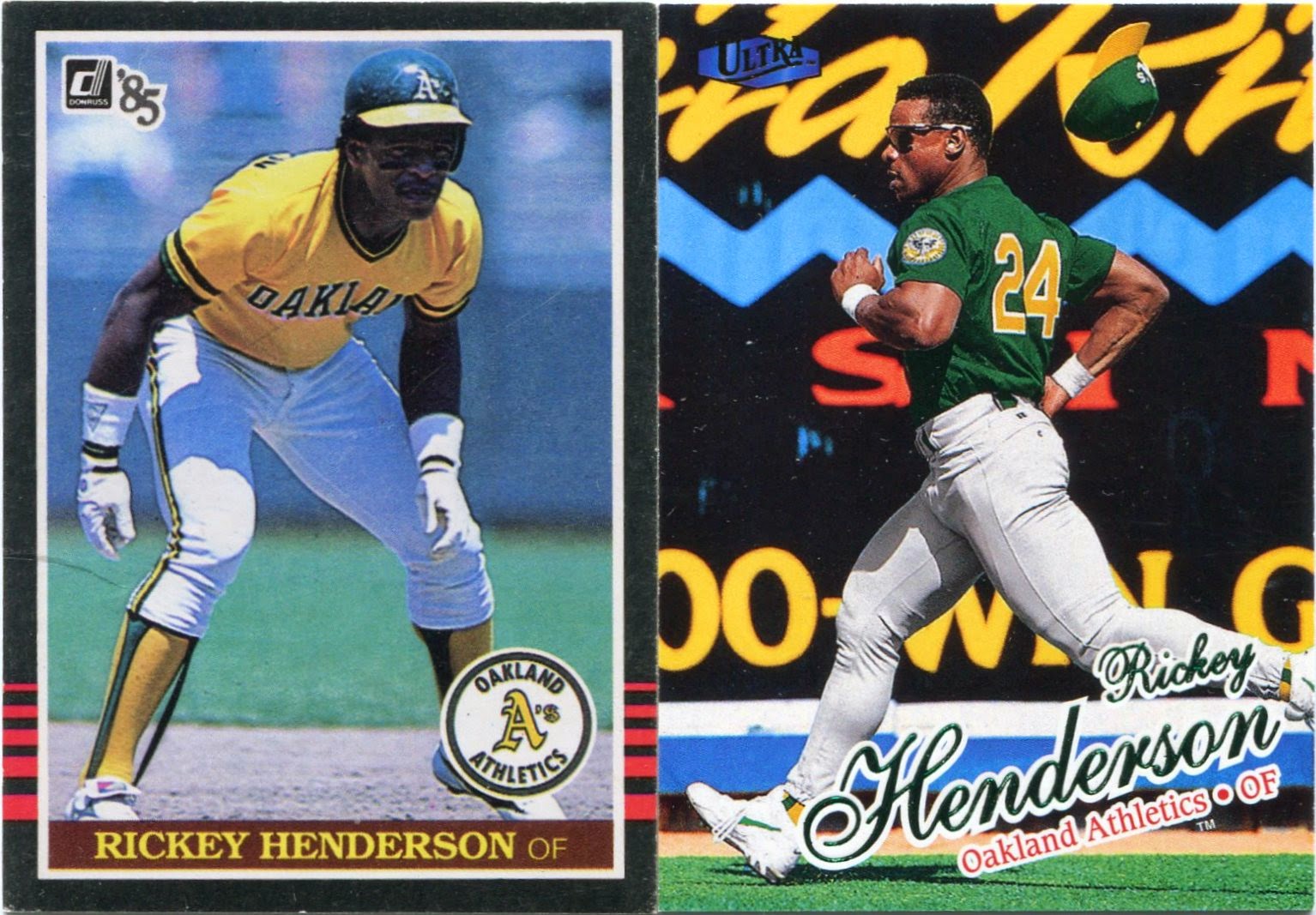 I just recently decided to start a full-on player collection of Rickey Henderson.

I'm amazed at how prime of a dime box suspect he is. My collection is already nearing the 200-card mark.

Whether it's '80s Rickey or '90s Rickey, he received some sweet cards during his career. 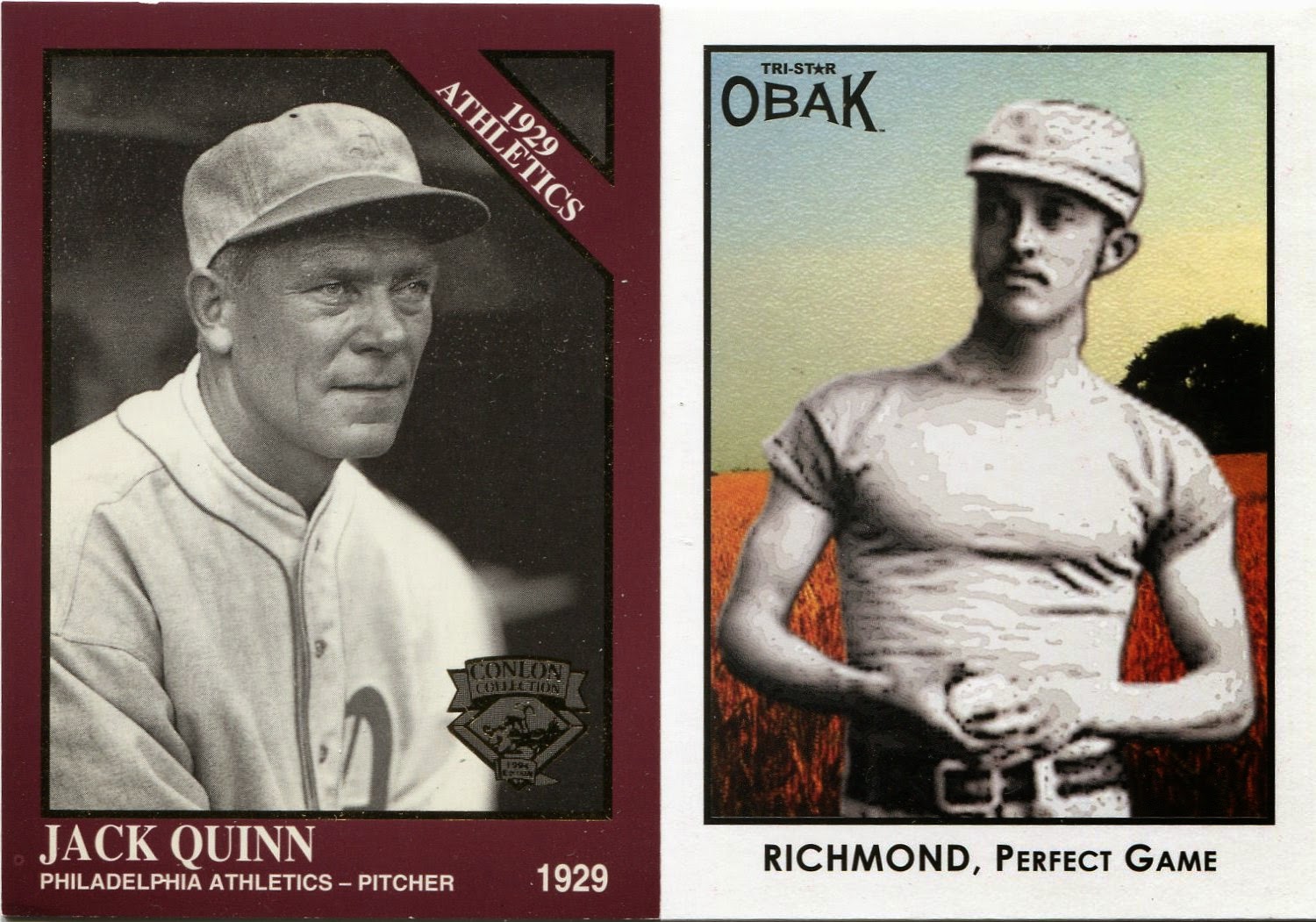 Time to take a ride in the way back machine.

Jack Quinn is the only big leaguer I know of to have been born in Slovakia. J. Lee Richmond is credited with throwing the first official perfect game in 1880.

Go ahead and win some bar bets with those two pieces of trivia. 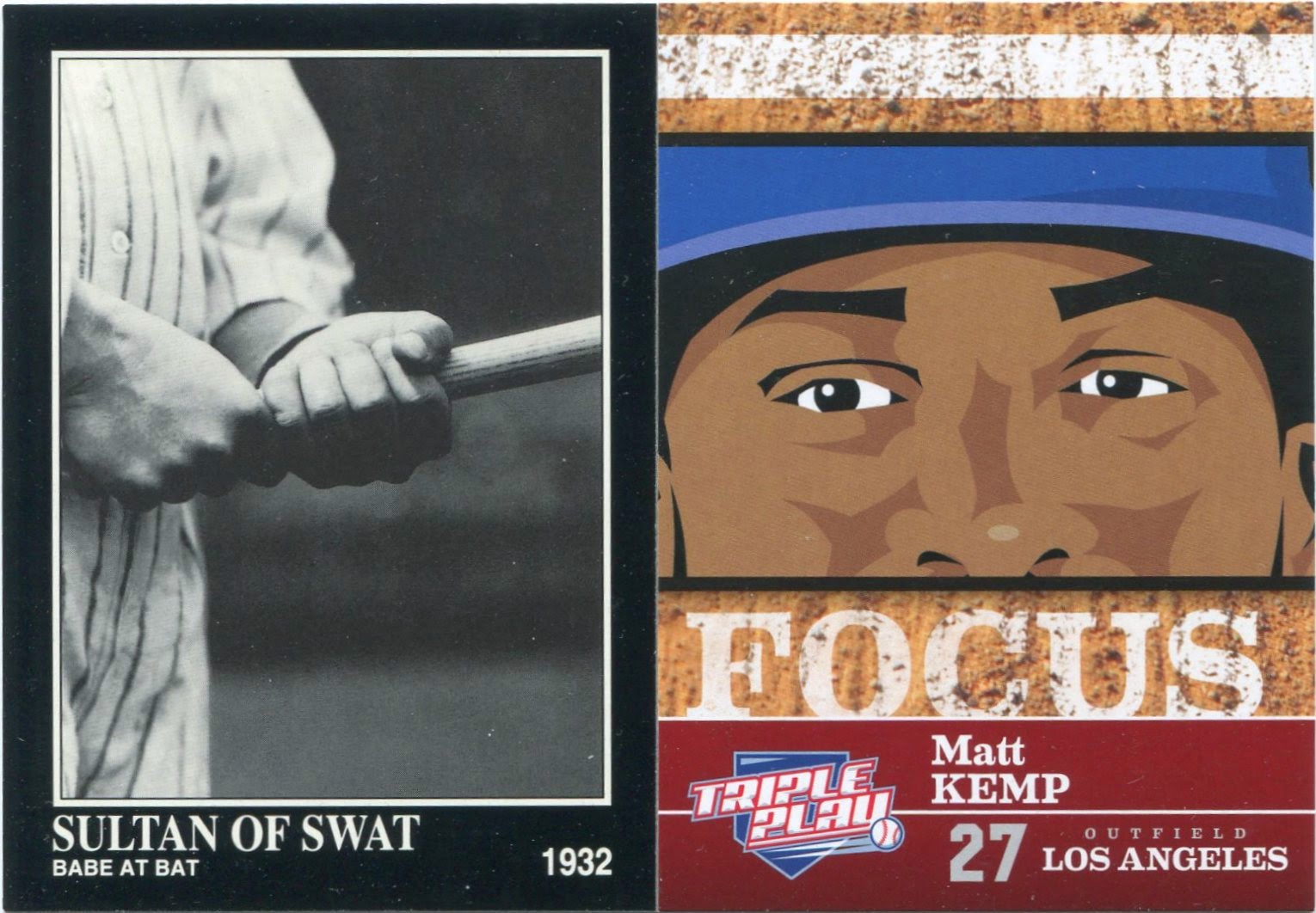 Disembodied body parts for a dime? 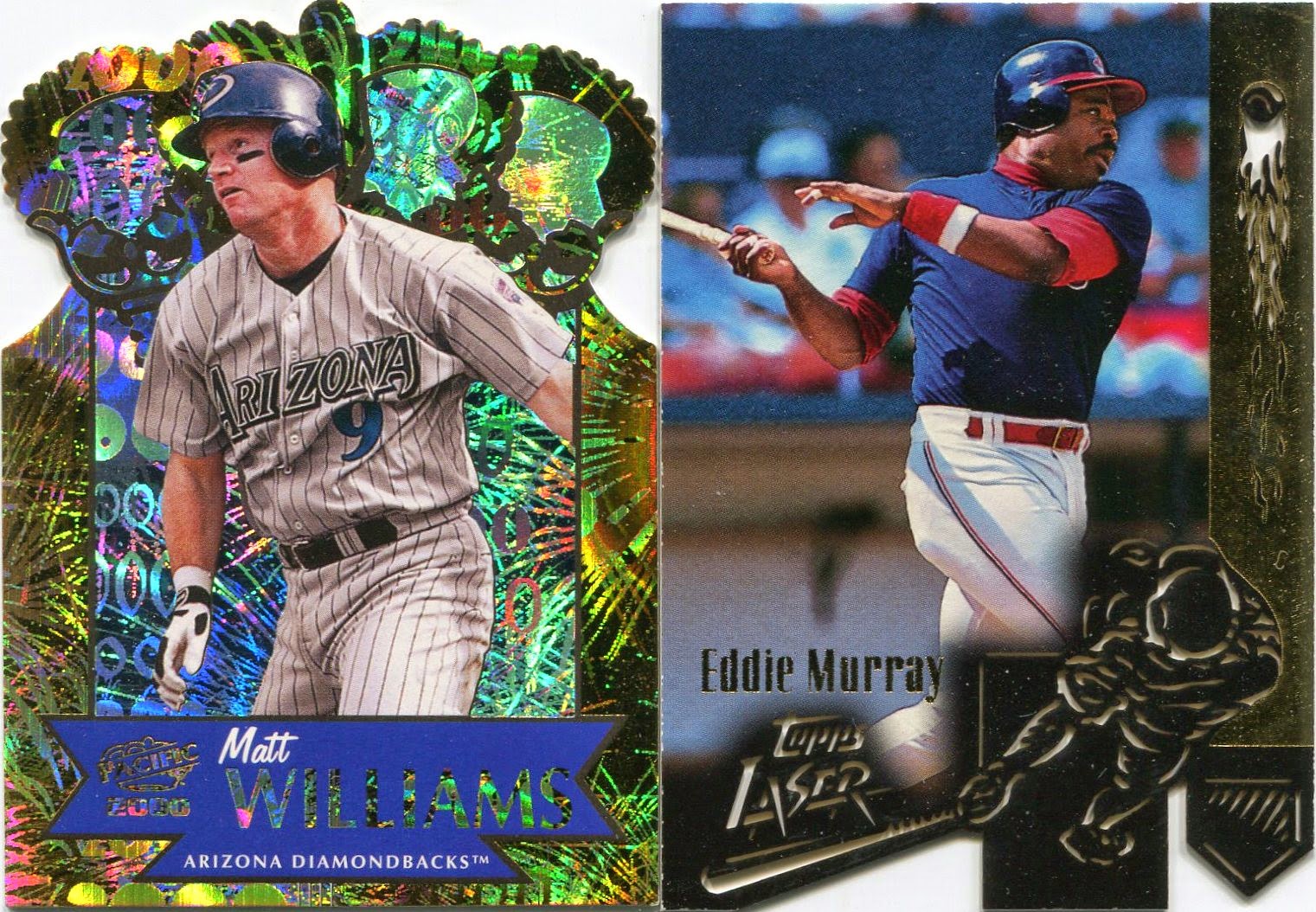 I found quite a few kooky cards in this guy's dime box.

These are two of the more oddly-shaped pieces you'll ever see. The Williams is especially seizure-inducing. It has to be Pacific.

That should've been their motto. 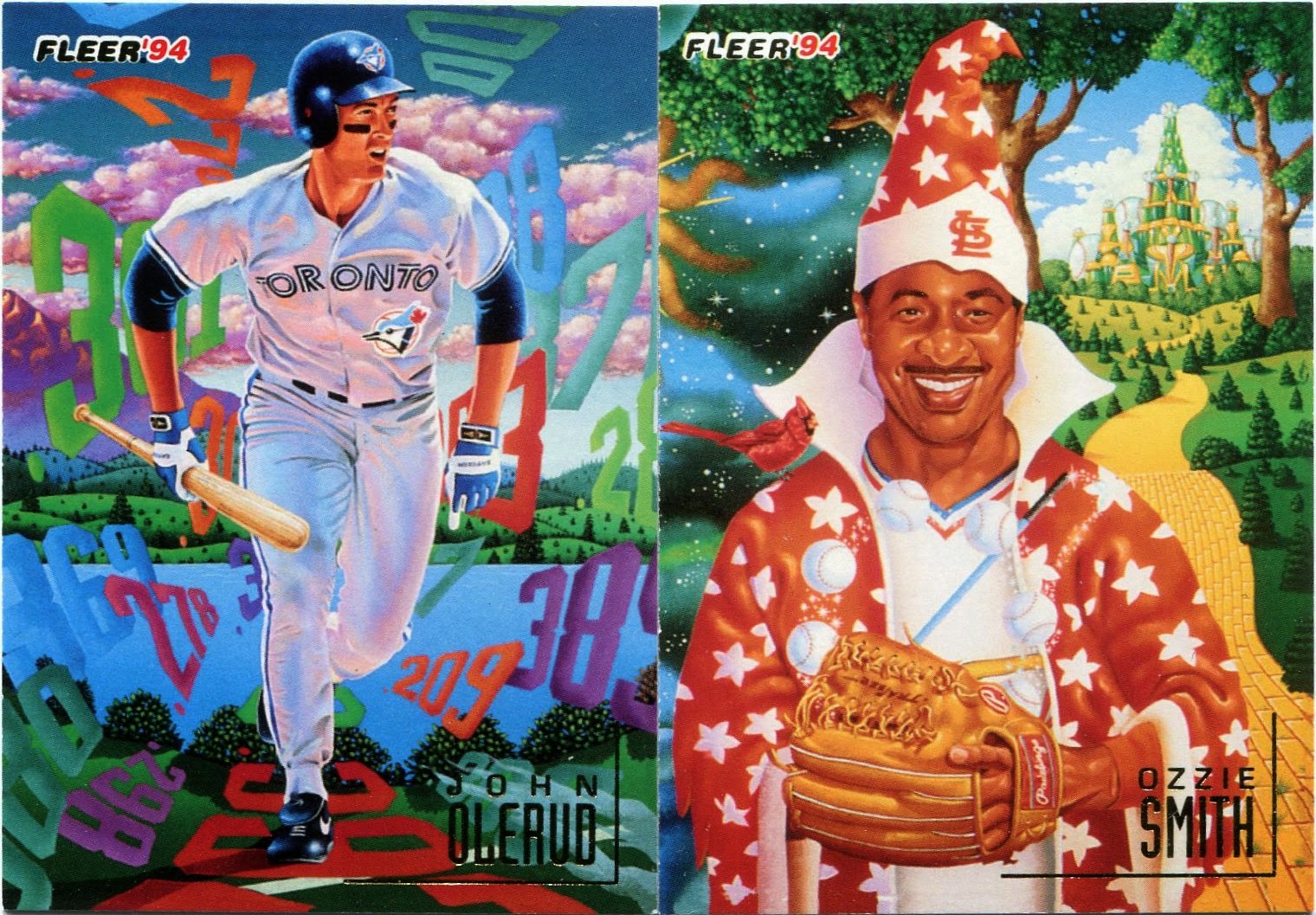 I've seen these wacky 1994 Fleer "Pro-Visions" inserts on a few other blogs.

I finally found a few of my own, landing about a half-dozen of them from this dime box. I can't even begin to try and explain what Fleer was thinking with these.

Maybe we shouldn't be all that surprised with what they churned out the very next year. 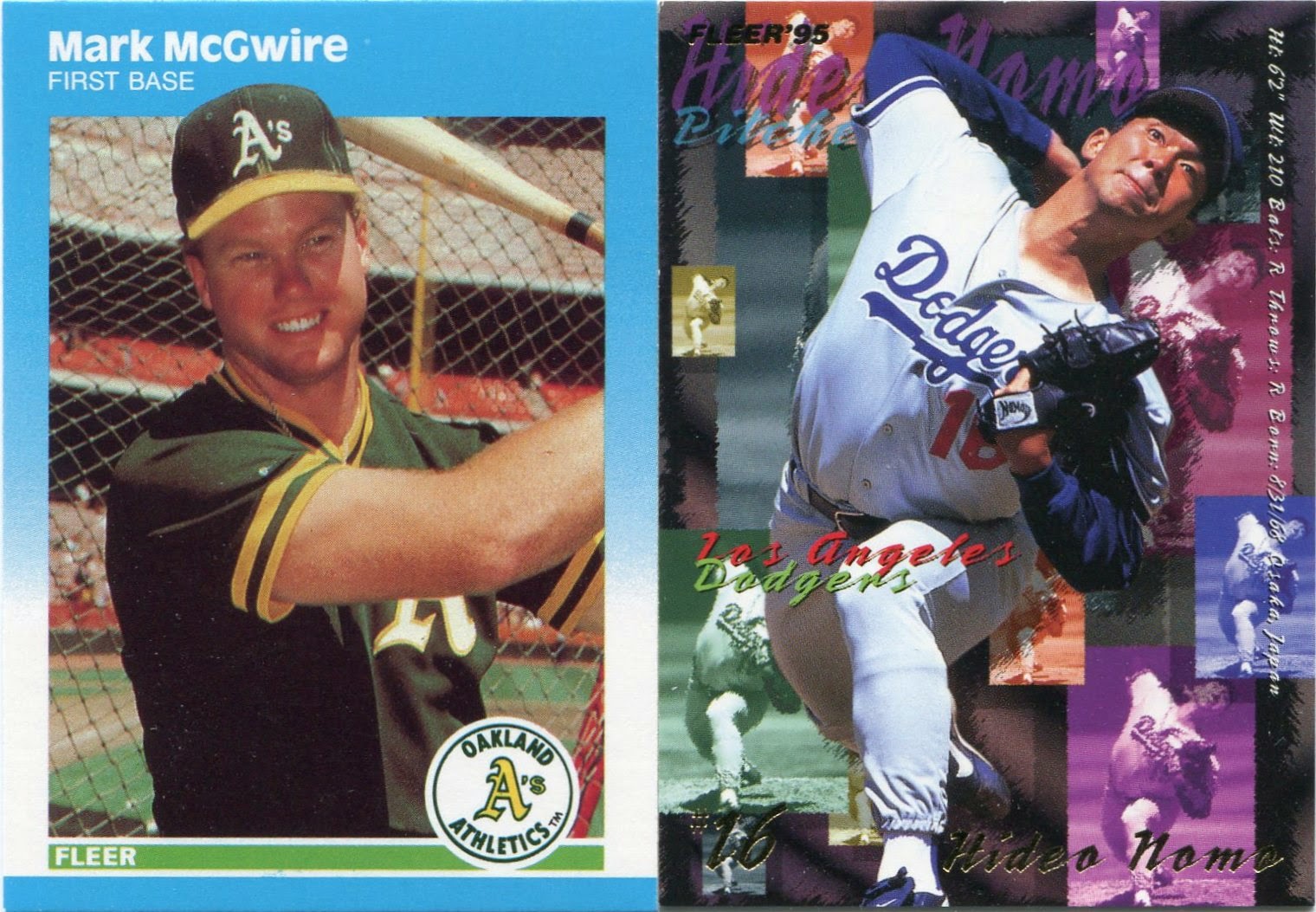 The lone '95 Fleer single I found was a memorable one.

It was a rookie card of none other than the immortal Hideo Nomo. Something about the zany design fits him.

I don't collect Mark McGwire. I just wanted to prove that you can find rookies of his in dime boxes here in 2014.

Oh, how the mighty have fallen. 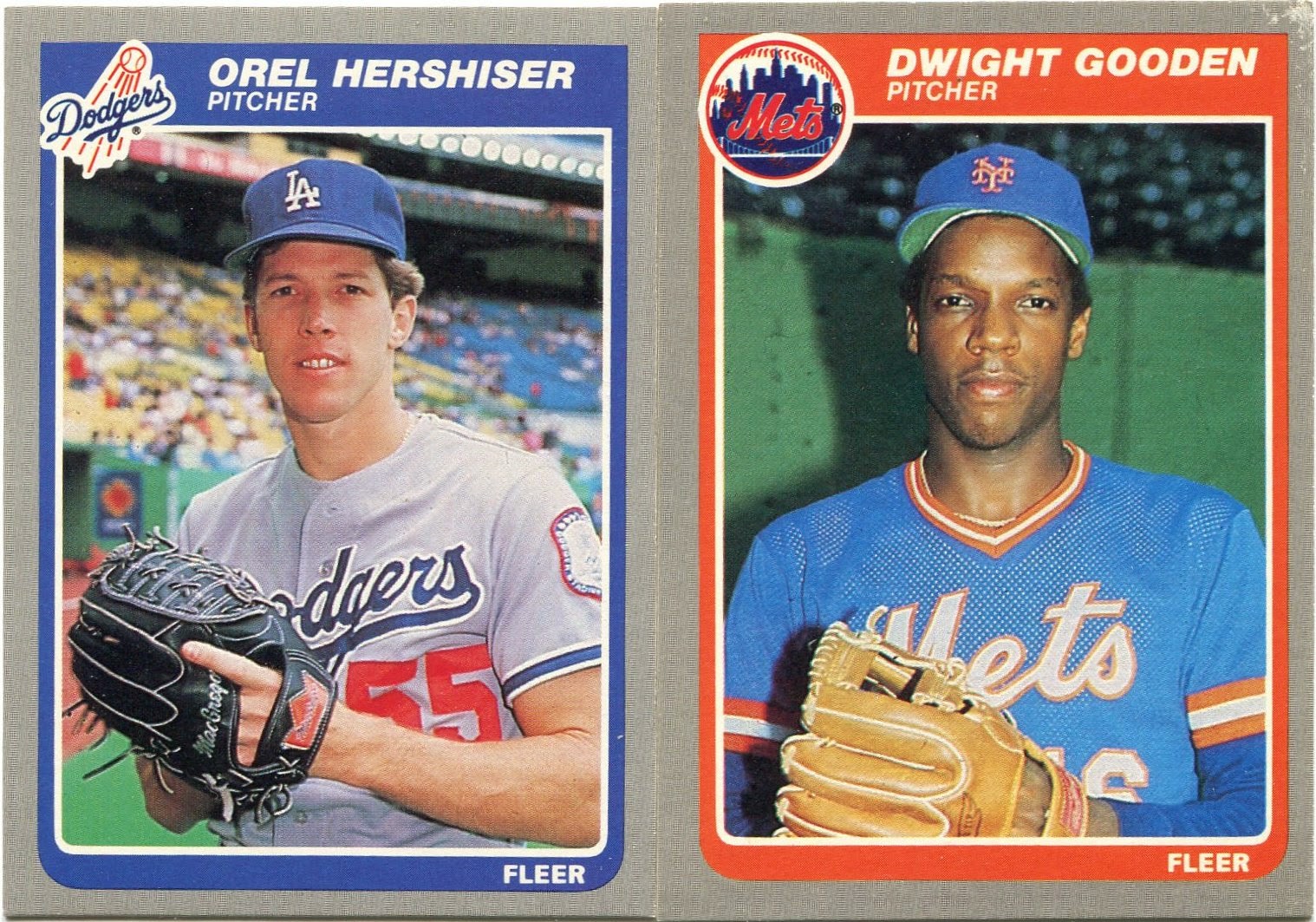 These two aces are starting to gain traction on my cardboard radar.

I've been picking up more and more Hershiser and Gooden cards lately. As I've found, even rookie cards of theirs aren't prone to winding up in dime boxes.

I'm still shocked I snagged these for loose change. 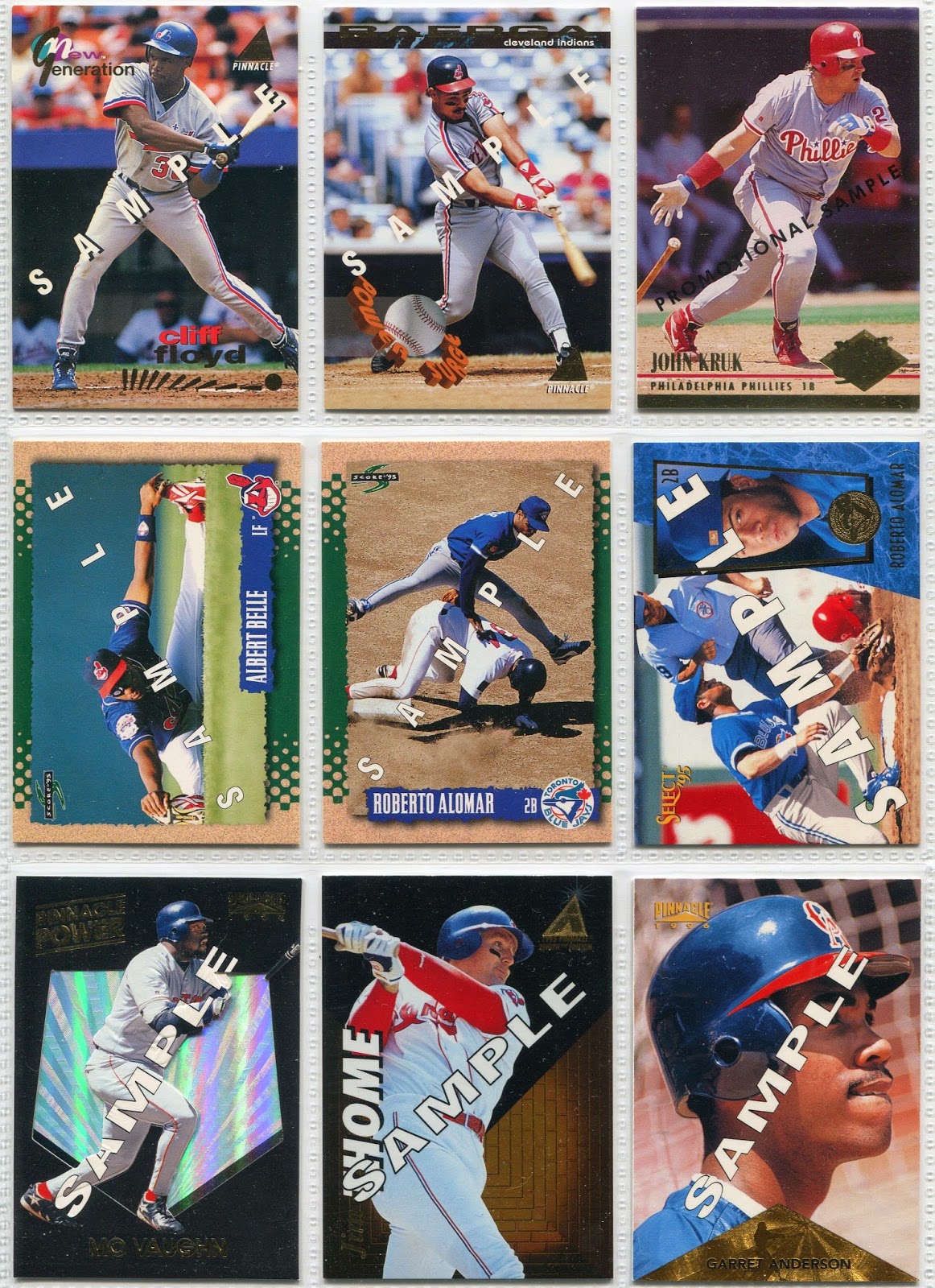 I made a pact with myself on Sunday.

If I see one of these very '90s SAMPLE cards in a dime box, I'm going to buy it. I don't care what team it features, what set it's from, or who it is.

I'd never seen so many samples in one spot before Sunday. I'm not exactly sure how or why so many of these hit the market during the '90s, but they make for curious little oddities. 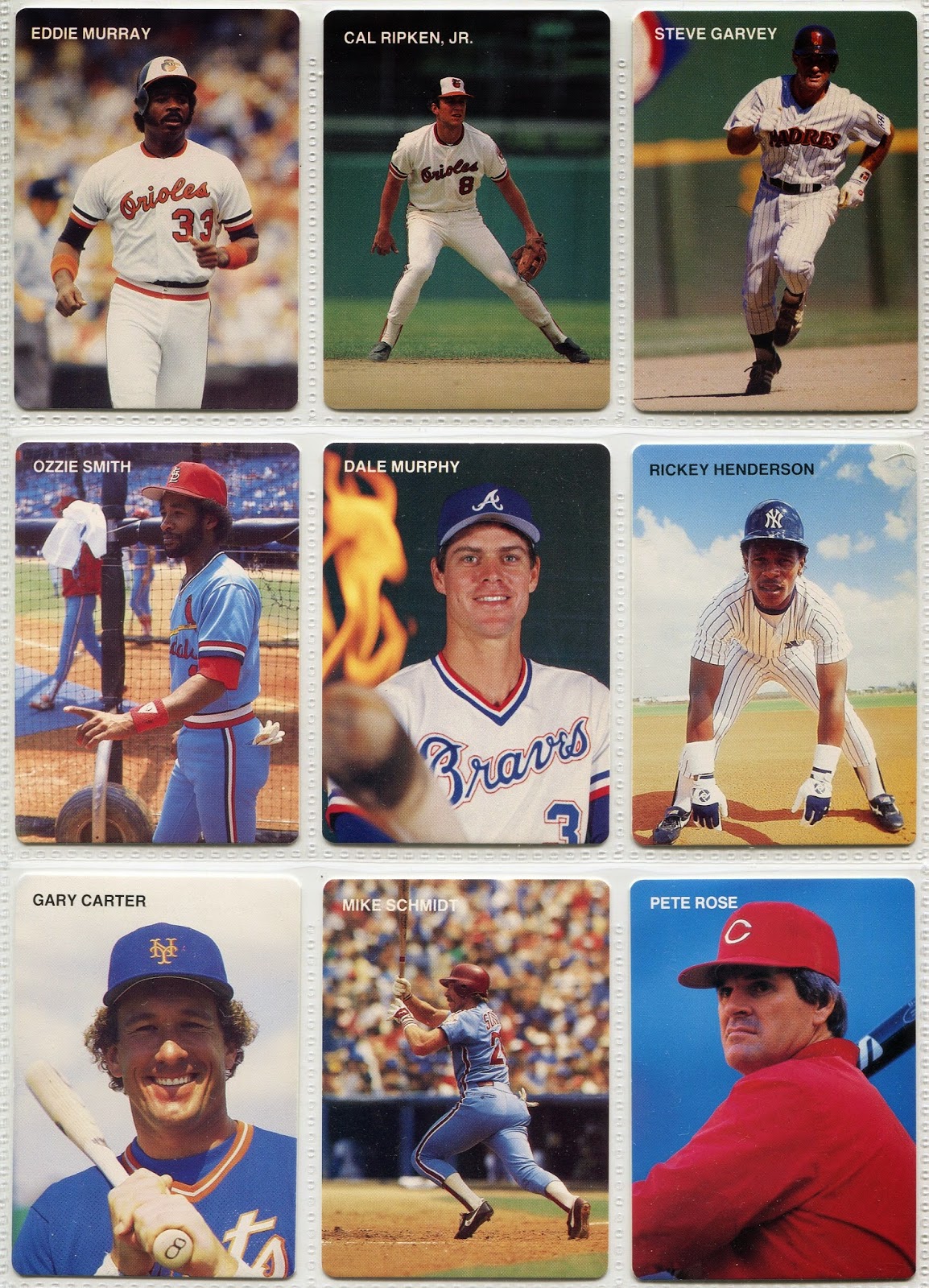 That's why I was so happy that they became the premier headline on Sunday.

I even managed to expand my oddball knowledge, which is always a plus.

I found a stack of these beauties about halfway through my dig, yet had absolutely no information on them. They have a very Mother's Cookies feel and feature some excellent photography. Check out that burning hot Dale Murphy card in the center for proof.

A little research showed that these come from a guy named Scott Cunningham. He released these in 1986 as a way to advertise larger photographs he had for sale. 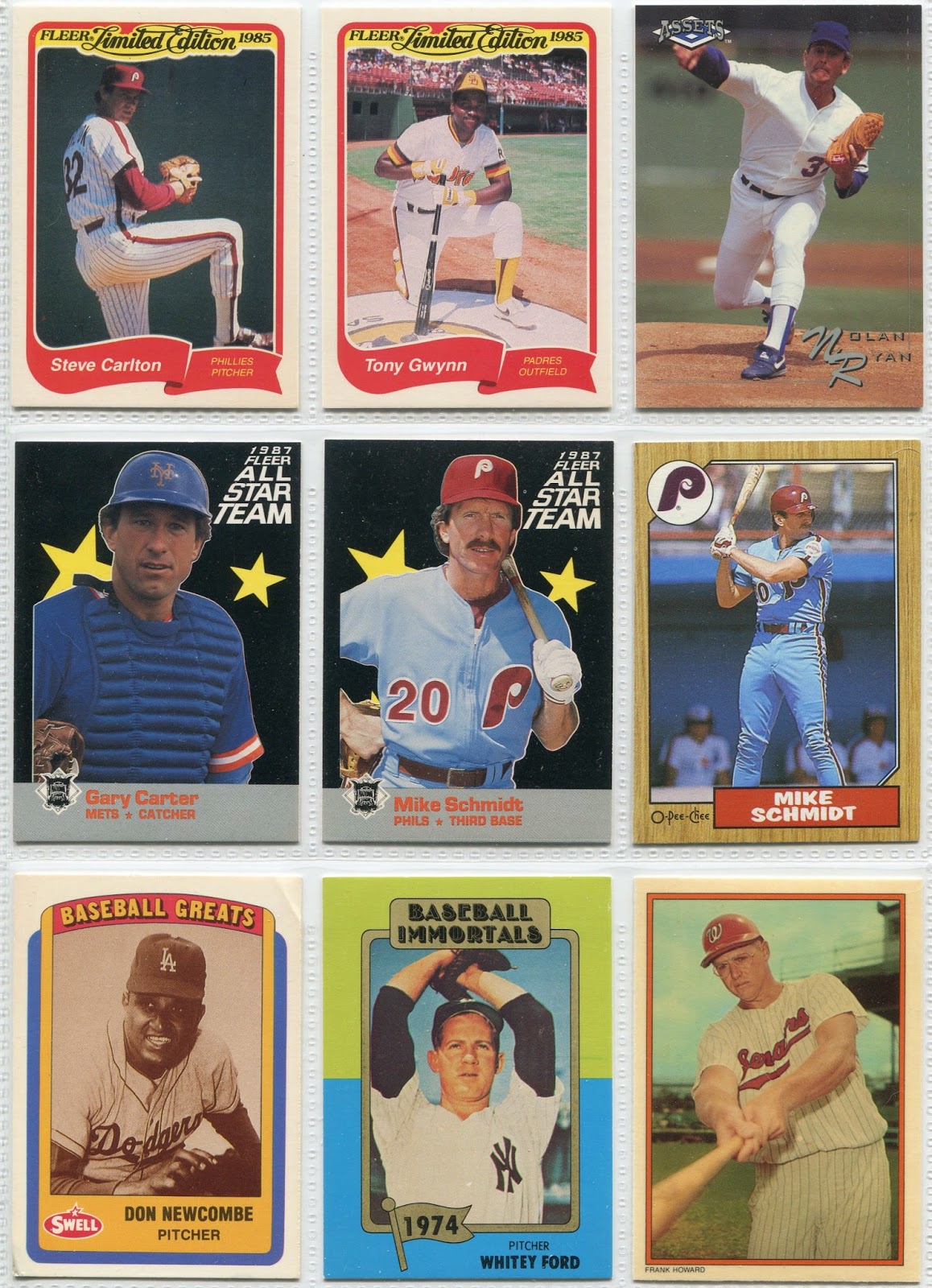 But those were far from the only oddballs I found on Sunday.

Try these on for size.

So much oddball goodness. 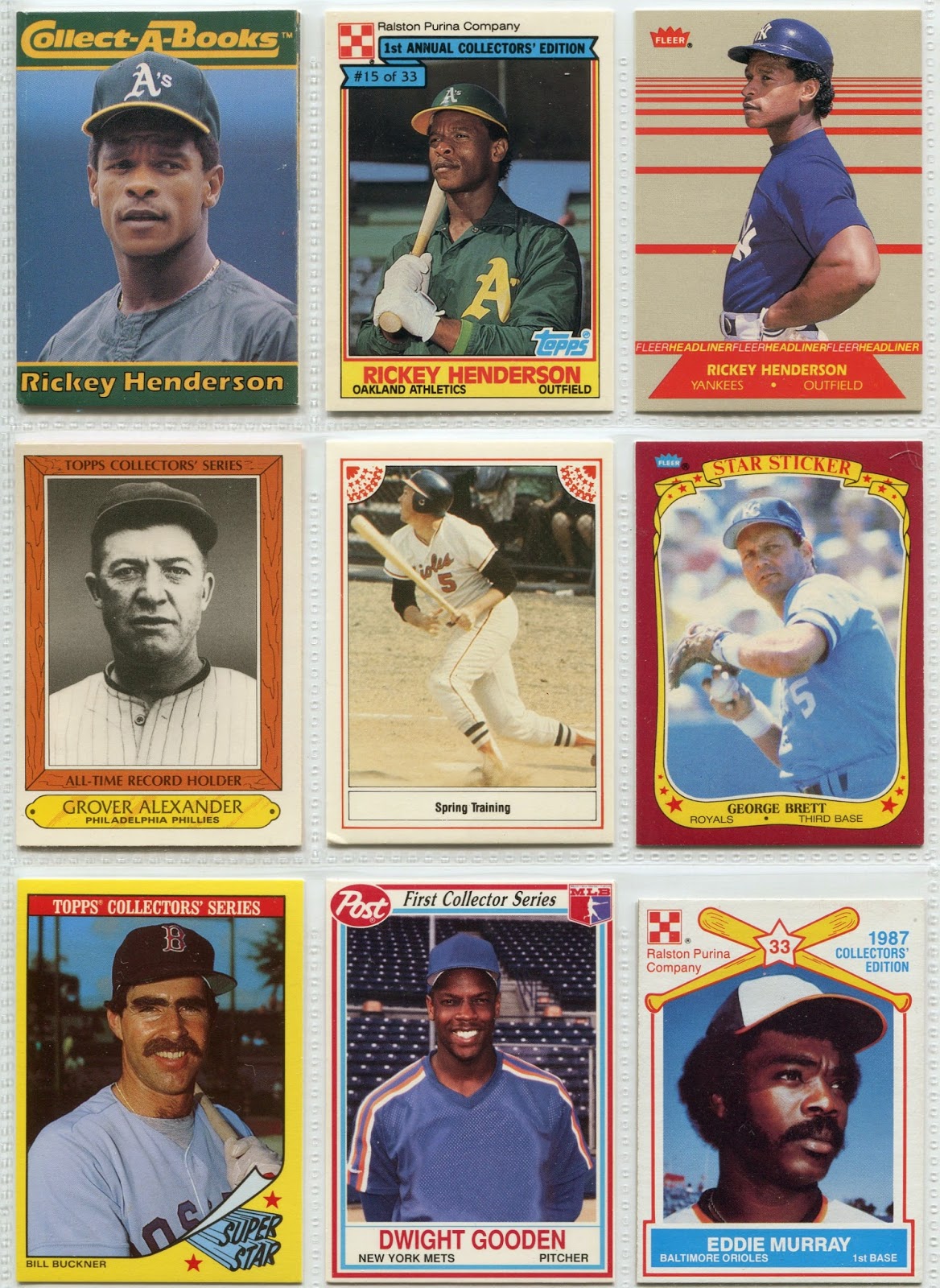 Collect-A-Books. Purina. Post. And these weren't even all the oddities I found on Sunday, believe it or not.

It was easily one of my better dime box digs ever. 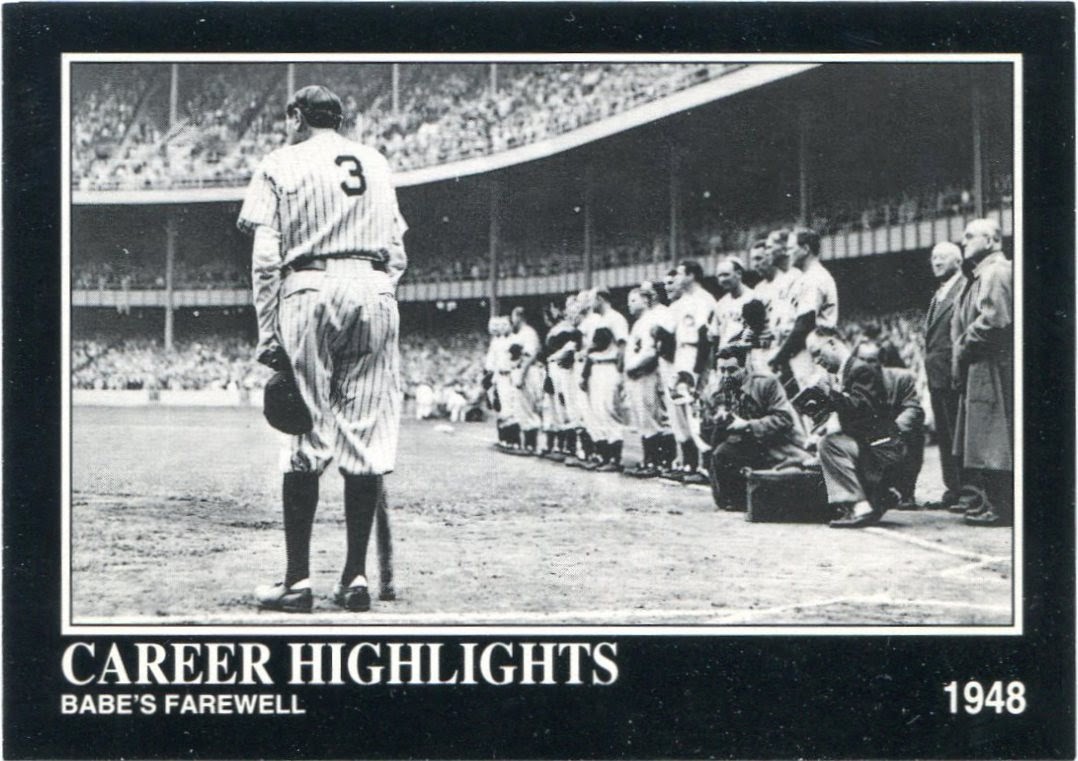 I spent so much time digging through this box in particular that I didn't even have a chance to get through this guy's quarter, fifty-cent, or dollar cards.

I didn't want to leave my friend wandering around the flea market for too long, after all. Besides, I figured I got more than enough enjoyment out of these dime boxes alone.

As I finished counting my cards, I was stunned. I got a bit carried away. I guess it happens to the best of us.

I'd picked out 340 dime cards in total. Since I was down to my last few bucks at the time, I was worried that I wouldn't have enough to cover it. I figured I'd at least bring them to the guy so he could quote me a price.

I'm no math genius, but the retail value of my finds should've been 34 bucks.

You know what the guy wanted for the lot?

Yes, ten dollars for 340 cards. I vehemently thanked him and handed over a crisp ten-dollar bill.

On that note, I bade a grand farewell to the glorious local flea market. Twenty dollars had never gotten me so far.

It beat the hell out of a lousy blaster.

Please tell me you found a Gordon Beckham mini in that box and it's on the way to my house.

Wow nice pick-ups and what a deal!

You did good my friend... The Ortiz mini front and centet

Send me a local newspaper. I need to check the rental listings. I'm moving to where you are as soon as I can find someone to take my cat. (If my wife lets me...)

Didn't realize you started collecting Rickey. Do you have a list of what you have? I have a fairly sizable box of dups laying around here somewhere.

There are so many awesome cards... it's hard to pick a favorite. I love those "samples"... but the Gooden rookie is sweet too. Good job Nick!