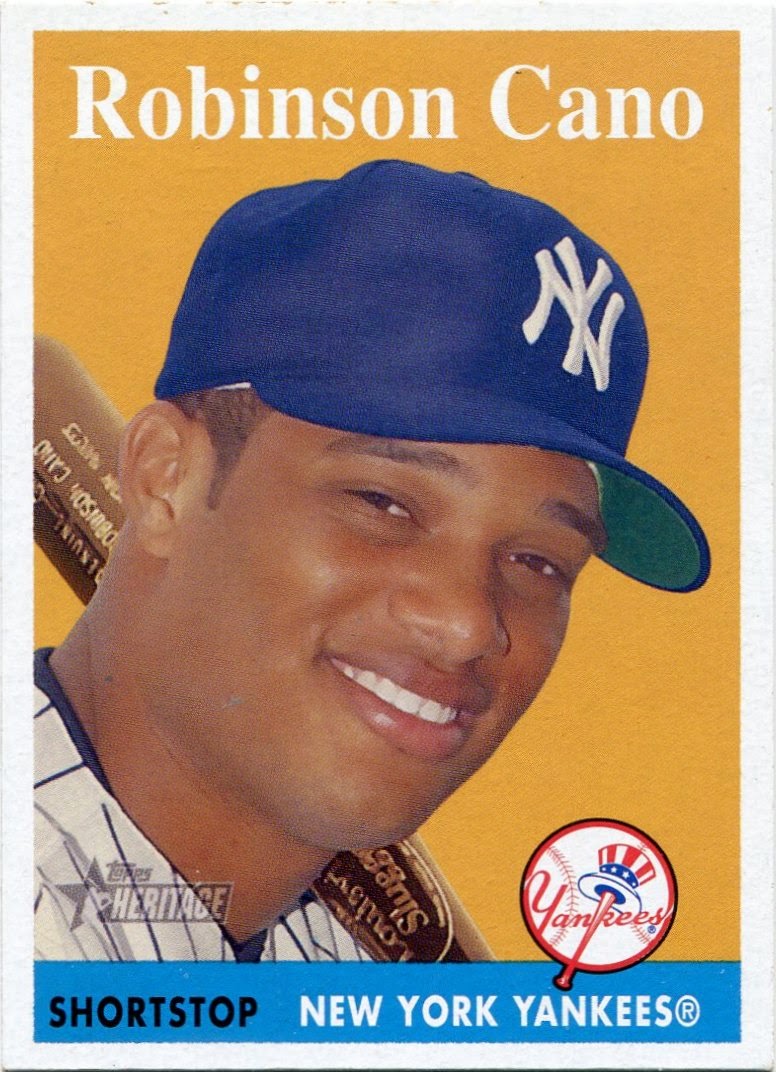 I think it's silly to hold grudges.

I find this especially true when it comes to sports. You can't blame a guy for jumping on a fat contract when another team offers it to him. Especially in this very consumer-driven day in age.

You may have seen Yankees fans boo Robinson Cano upon his return to the Bronx earlier this year. I get their disappointment over seeing such a star go to another franchise, but you can't hold a grudge against Cano for jumping ship.

The Mariners gave him $240 million. I think the Yankees only offered him somewhere around $175 million. I seriously doubt any one of those Yankee fans would've turned down 65 million bucks if they had the chance.

While I'm not the type of person to hold a grudge, I will admit that a huge contract doesn't make the sight of Cano in a Mariners uniform any less strange. No matter what he does in Seattle, I'll probably always think of him as a New York Yankee.

If the Mariners can develop into a formidable team, I wouldn't be surprised to see a Yankees-M's rivalry sprout up in the next few years.

He wouldn't be the first guy to leave the Bronx for a hated rival. 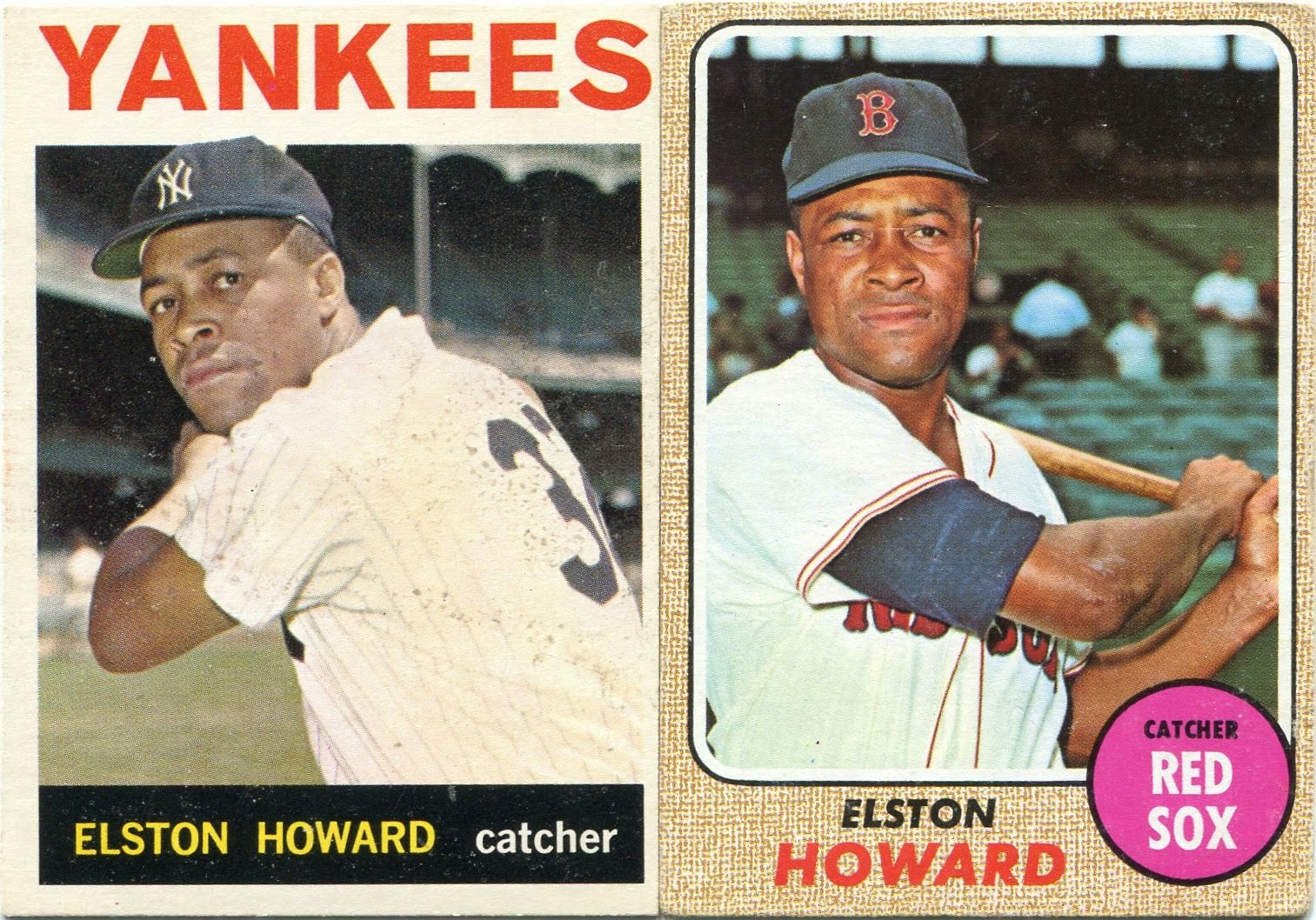 Because he left in what looks to be the prime of his career, Cano's case is a little different than others.

It's one thing to jump to a rival in the prime of your career. It's quite another to do it when you're all but washed up in the bigs.

Elston Howard was one of the game's greatest catchers during his time with the Yankees, capturing the 1963 NL MVP award during a star-studded career.

As far as I know, his 1968 Topps "sunset" issue is the only one to feature him in Red Sox gear. Maybe that's for the better.

I'm sure a lot of Yankee fans want to forget that Howard was ever with Boston in the first place. 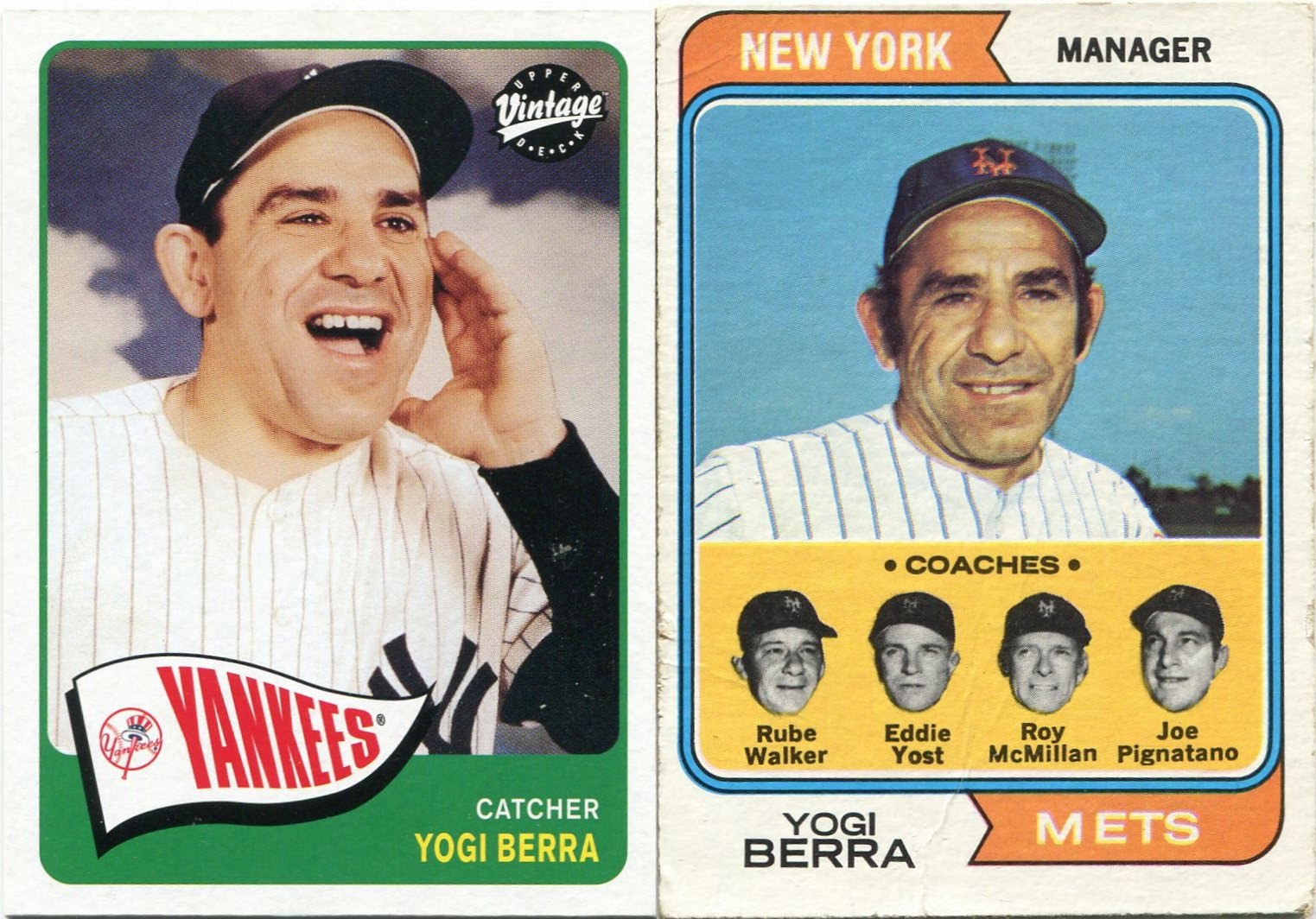 Just ask Yogi Berra. His long career with the Yankees earned him a plaque in Cooperstown. He even managed the Bombers for a single season in 1964.

As the 1970's rolled around, however, Berra found himself managing on the other side of New York. He led the Mets to the NL pennant in 1973 before being let go in '75.

I have a couple manager cards of Berra as a Met, and none of them look quite right to me. That's nothing against the Mets, though. 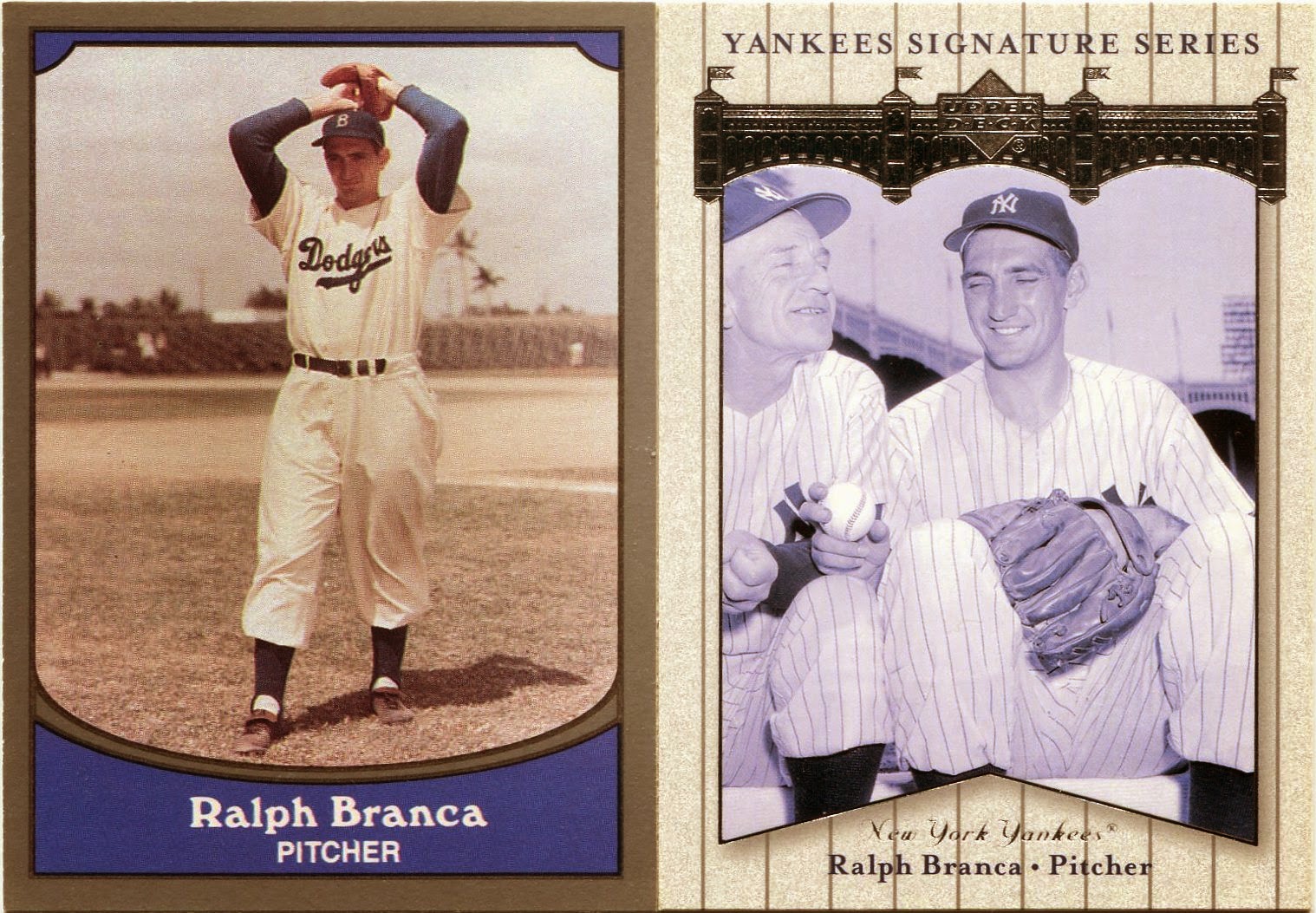 This is one of my favorite rival pairings.

When you think of 1950's baseball, the two teams that probably pop into your head are the Dodgers and Yankees. They faced off in the World Series three times during the decade.

Though he's best known for giving up Bobby Thomson's famous "Shot Heard 'Round the World", Ralph Branca was one of the better pitchers for the Dodgers during the '50s.

The fact that he later became a hated Yankee sometimes gets lost to history. He appeared in a grand total of five games for the Bronx Bombers in 1954.

I'm surprised there's even a card of him in the pinstripes.

Much less one with a great Casey Stengel cameo. 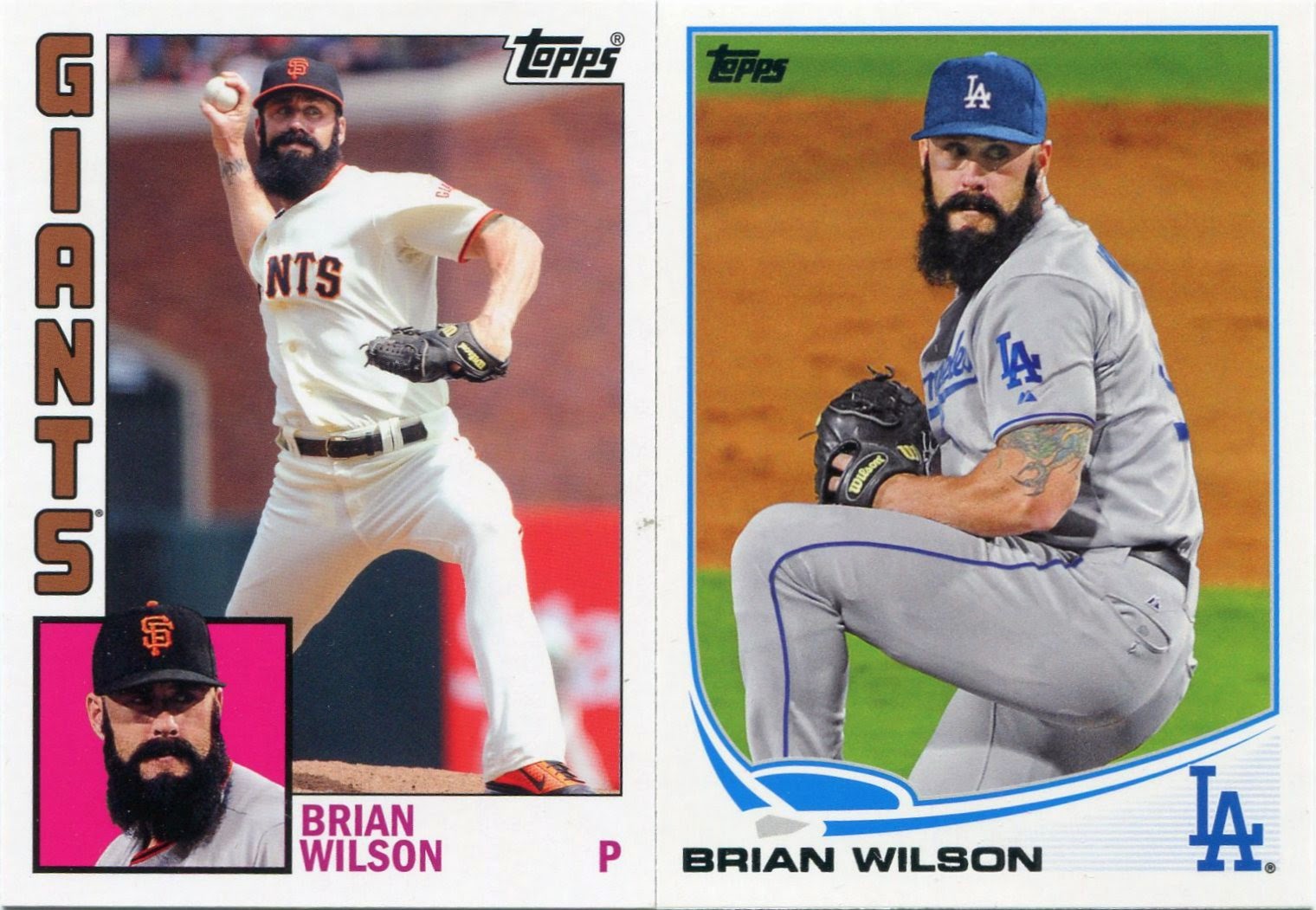 With the way players are jumping around these days, heated rivalries are starting to die down a bit.

One of the few exceptions to that rule, however, are Dodgers-Giants matchups. There still seems to be some animosity between the two franchises. Baseball could use more of that.

I guess that's why I still can't get used to seeing Brian Wilson in Dodger blue.

He (and his beard) just seemed to fit so well in San Francisco. 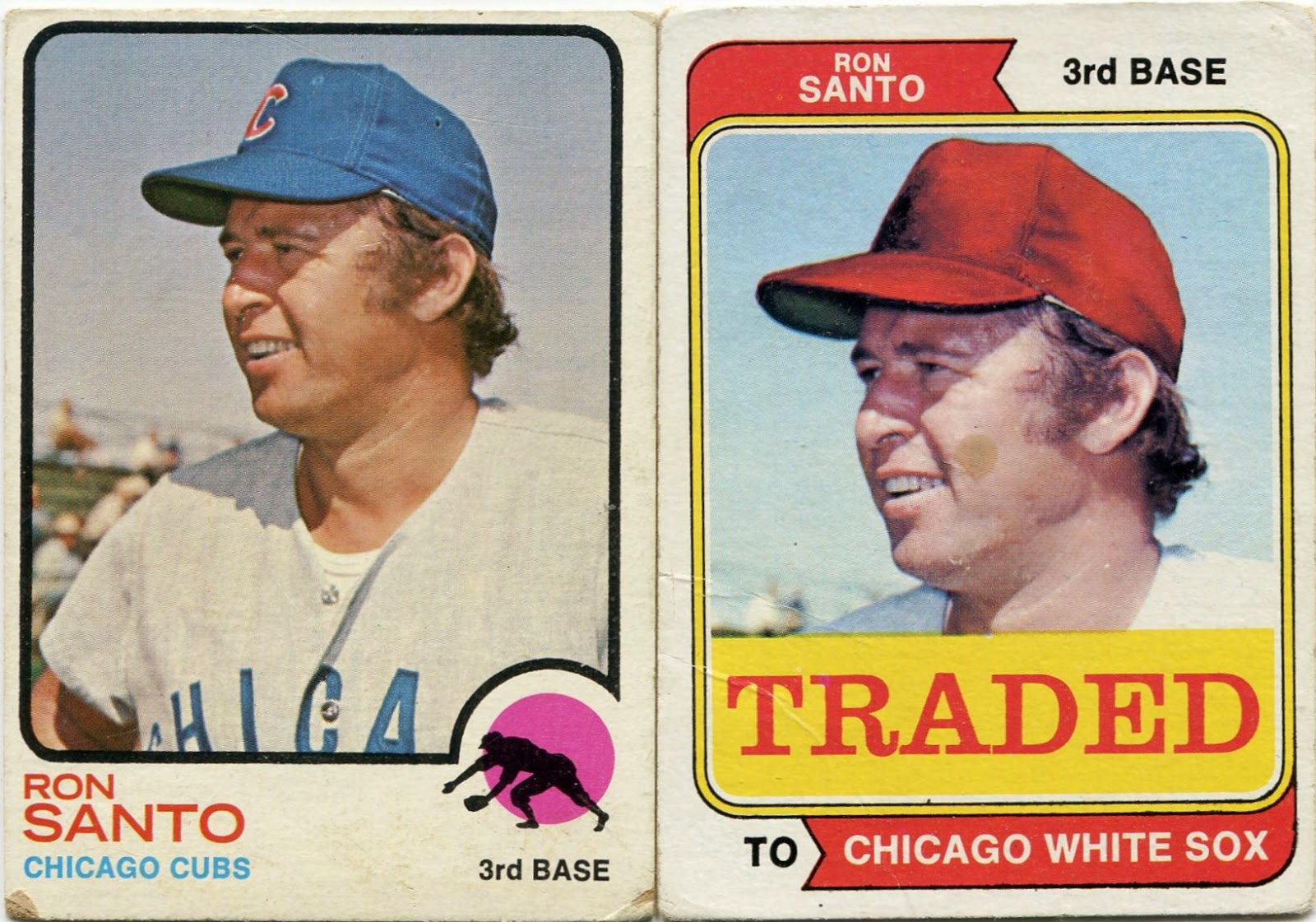 Ron Santo is one of the more famous examples of this phenomenon.

Of course, the Hall of Fame third baseman (it feels so good to finally be able to say that) has become one of the faces of Cubs history. His playing and announcing career won over the hearts of many Cubs fans around the globe.

What some Cubs fans might not know is that Santo spent a forgettable 117 games with the 1974 White Sox. I can't imagine what it was like for people to open packs that year and see that big "TRADED" banner.

Only now am I realizing that Topps just airbrushed the picture on his card from the year prior. 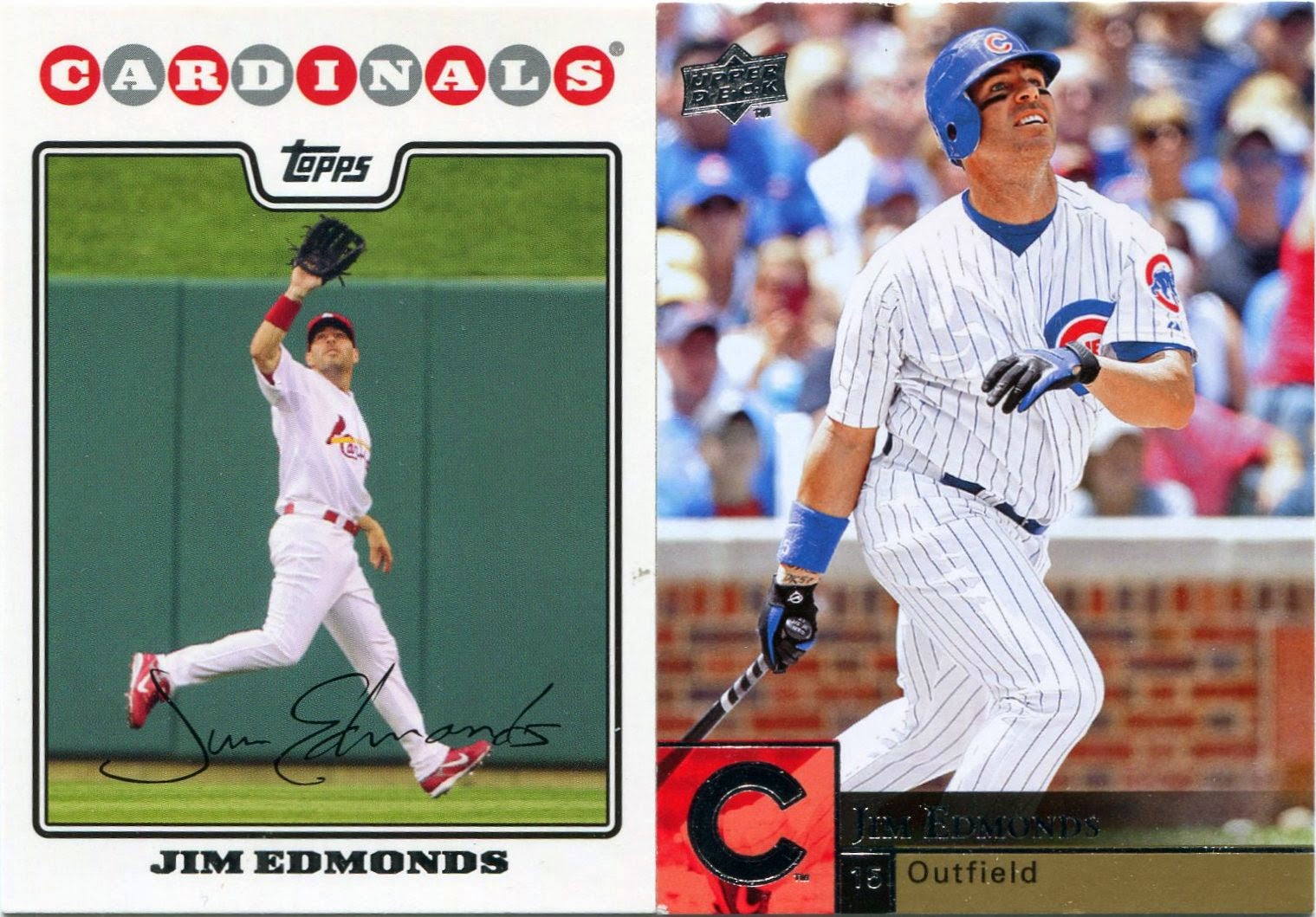 Though he was an Angel during his younger years, Jim Edmonds is a St. Louis Cardinal to most baseball fans.

I'll admit, I was a bit skeptical when the Cubs snatched him off waivers from the Padres in 2008. I couldn't quite understand why.

The Cubs and Cards have always been fierce rivals. And, although the Cubs aren't exactly a banner franchise these days, it was nice to see them put a 17-5 beating on the Redbirds last night. (Although I wouldn't be at all surprised if the Cards came back with a 20-2 beating this evening.)

Edmonds quickly won myself and many other Cubs fans over by hitting 19 homers in 85 games with the Cubbies, helping lead them to the division title in '08.

That's why I'm still such a huge Jim Edmonds fan to this day. 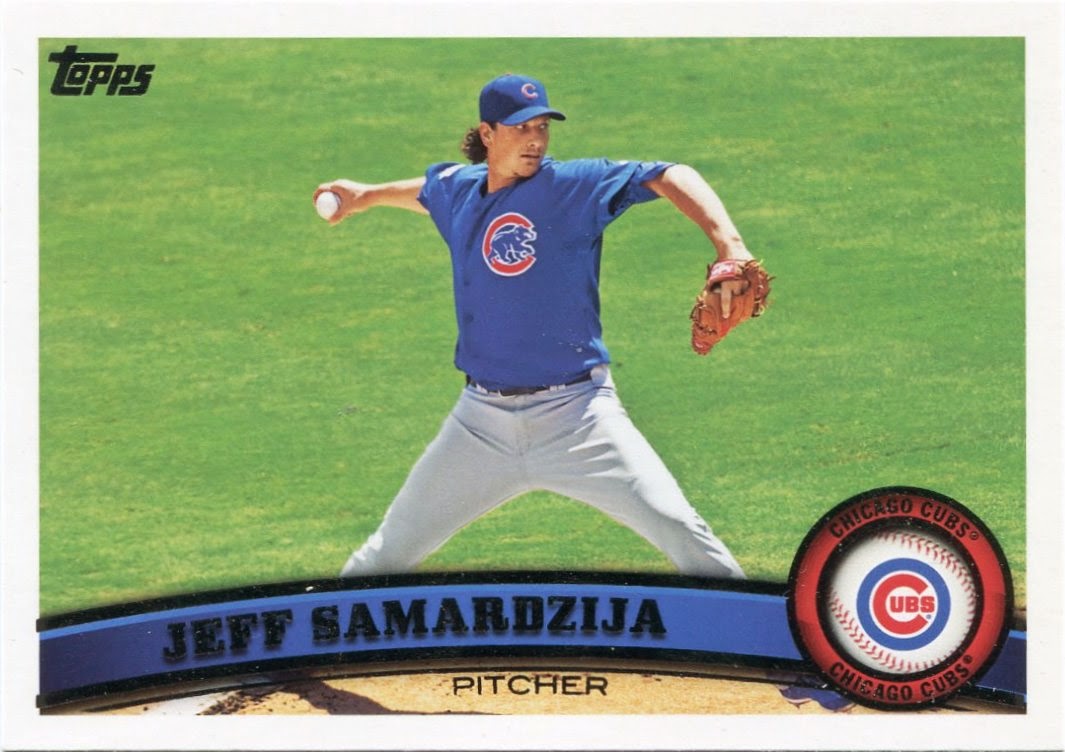 I don't expect the Cubs to be able to resign Jeff Samadzija when he becomes eligible for free agency in a few years.

I can't blame him for wanting to get the big bucks somewhere else. And if he ends up signing with someone like the White Sox or Cardinals, so be it.

Just don't expect me to ever get used to seeing him in a rival team's uniform.

Because that'll probably never happen.
Posted by Nick at 6:11 PM

I guess this could go on forever but seeing Yogi reminded me of Casey Stengel who won a boatload of championships with the Yanks then manaaged the expansion Metsies. Totally agree with you about Edmonds. Regarding Jeff S. There's at least a fair chance he may not be a Cub at the end of this season. Oh, and poor Ronnie. An awful year where he got screwed over by the Sox so much so that he walked away from a considerable sum not to play the last year of his contract.