COMC for what ails ye 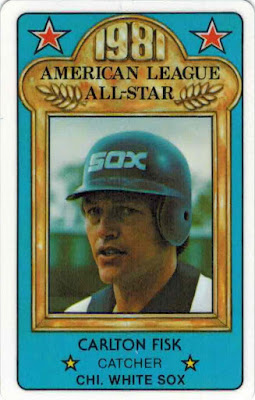 Often during my last despairing weeks of work, I'd hop on over to COMC at night and bask in their incredible inventory for a while.

I don't condone repeatedly buying things as a stress reliever, but fact is plopping a few things here and there into my cart each evening did have a calming effect on me. I'm only slightly exaggerating when I say COMC has almost every baseball card ever made, and it's easy to get lost over there (in a good way).

I mean, it's hard to stay mad at the world knowing that wonders like this Carlton Fisk Permagraphics oddball exist. 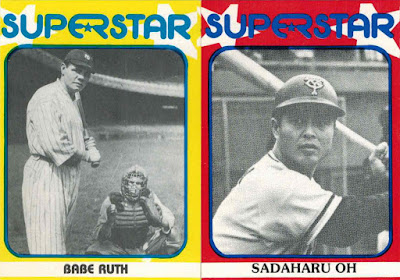 Or these TCMA Superstars of arguably the best players in US and Japanese baseball history. 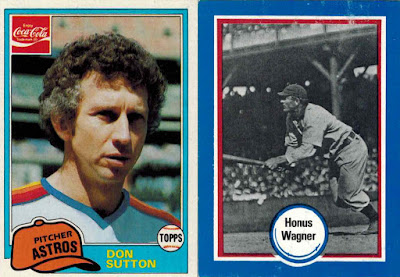 If you haven't figured it out by now (or with any of my past COMC posts), oddballs are my main course of choice on COMC.

The Sutton is, of course, an '81 Coca-Cola oddball, made even more odd by the fact that it's one of the few from the set to feature a different photo (and a different team, no less) than the one seen on said player's standard '81 Topps card.

And you can use the Coke you got with the Sutton to wash down a hearty meal from Shakey's Pizza, who, unbeknownst to me, produced a HOF-centric set of baseball cards in the '70s which included one Honus Wagner (though I can't say I've ever eaten at a Shakey's Pizza and I'm not even sure they still exist). 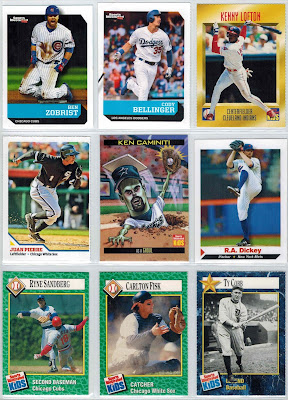 One night I found myself on an SI for Kids kick, which took me right back to my youthful days of stealing these cards from the SI magazines in my elementary school's library (I'm not proud of it, either).

The ghoulish Ken Caminiti at the center of this page might well be my favorite of the lot -- only later did I recognize its slightly dark undertones given the fact that Caminiti died not long after that card was made. 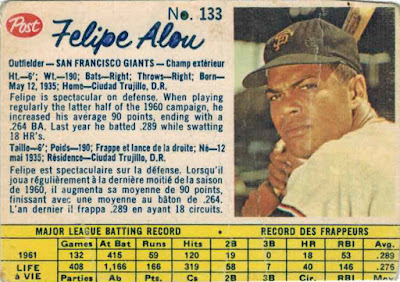 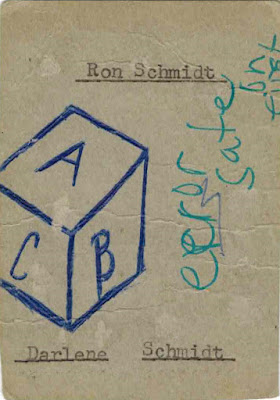 Here's a Post Canadian Felipe Alou (I flip out over anything of the Alou Bros., doubly so when we're talking foreign-language oddballs) which apparently features either Ron or Darlene Schmidt's geometry homework on the back. 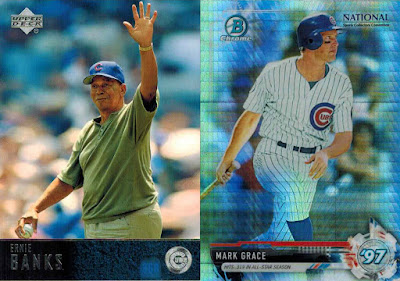 As if the cards aren't enough, COMC is also a place for discovery: for example, did you know Upper Deck made a First Pitch set more than a decade before Topps did?

I sure didn't -- I couldn't throw that Mr. Cub into my cart fast enough -- and neither did I know about the special Chrome VIP set given away at the 2017 National, which I attended (not that I could've afforded a VIP ticket, anyways). 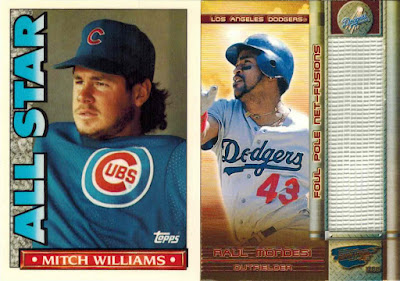 Here's something I've wanted for a long time: my first Topps TV card!

And unlike the Vinny Castilla I purchased in a past COMC order, this Mondesi does include actual net-like material in the design, which makes it infinitely cooler and totally worth the two bucks I paid for it. 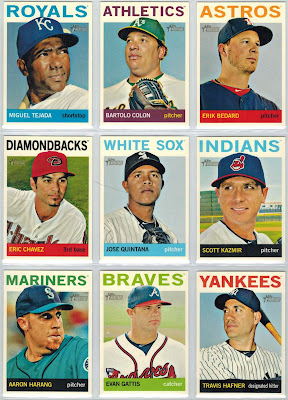 Remember when Topps sold those Heritage High Number sets online for $100 a pop?

Welp, four years later, I was able to buy a bunch of singles I needed at the far more reasonable price of 50-60 cents per (look at all the dudes in unfamiliar uniforms!). 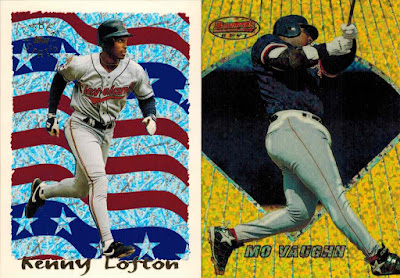 Every COMC order comes with a healthy dose of shiny, including the shiniest card I've added to my new Mo Vaughn collection as of this writing. 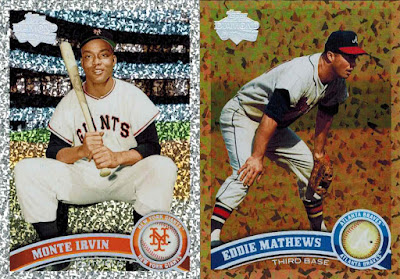 Few among us can resist 2011 Topps Legend parallels at under a dollar a piece, yes? 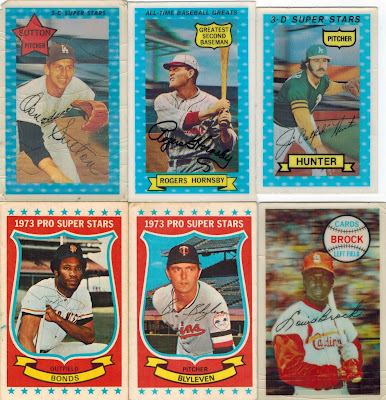 Almost all of my COMC searches eventually wind up with a long stumble into the Kellogg's rabbit hole.

From personal experience, it seems like Kellogg's singles in flawless shape go for big bucks, while almost no one wants ones with even the slightest cracks or flaws -- that's the only way I can explain how I got all of these big names for under a buck each. 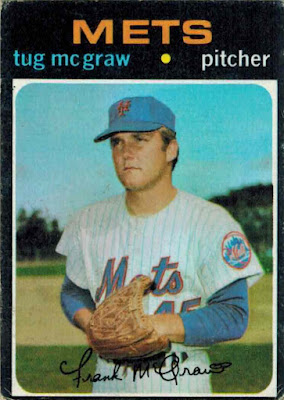 And finally, here's another reason I love COMC: it puts to rest the few disappointments offered by my local card show.

I specifically went hunting for this '71 Tug McGraw semi-high number (#618) at the last big convention hall gathering I attended a couple months ago. I don't remember seeing a single copy in all my hours there. Fast forward a few weeks later, and there it was, nice and ready to be shipped to me for a little over a dollar. Point COMC.

Really -- with a place like COMC at your disposal, who needs a stress ball?
Posted by Nick at 6:00 PM

It definitely has changed the way we buy and sell singles. I went to a card shop in Colorado Springs that had hundreds of binders on the walls with singles. They used to spend a ton of time keeping them up-to-date. They said since COMC came around demand for singles in the store dramatically dropped so they don't spend much time on singles anymore.

Count me among those that do some after-work stress relief COMC browsing and shopping at night sometimes :) Great batch of cards as usual Nick!

I've turned to COMC for retail therapy a time or two. Those are some nice oddballs, even the creepy Cammi. And the back of that Alou is awesome.

I totally forgot Travis Hafner was a Yankee. Can't keep track of all those DH/backup 1B guys they've signed over the years. I've never seen that Banks UD 1st pitch card before but I think there's a Ben Affleck in that set. Don't know who else is in it..anyway, that's a great find!

Glad to know I'm not the only one who turns to the hobby when I need a break from everything else that's going on around me. I've been spending a lot on COMC myself. Mainly picking up stuff for care packages I owe... but a few things for myself as well. I should follow your lead and see if there are any affordable Kellogg's for my binder.