Buyer vs. vendor (or, pontificating at the flea market) 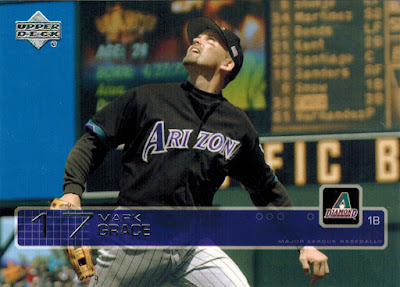 Though I've often wanted to, I've personally never set up as a vendor at a card show, flea market, or anything like that.

The closest I've ever come was selling Hot Wheels and board games at my uncle's garage sale when I was about ten or eleven. Ever since then, I've long been fascinated by what an afternoon of selling (rather than buying) cards must feel like. The many questions I have for sellers were rolling around in my head as I strolled through the flea market yesterday hunting, as usual, for cardboard.

First and foremost, I can't help but wonder from a physical standpoint how the heck people (many of whom are more than twice my age) set up at the flea market. 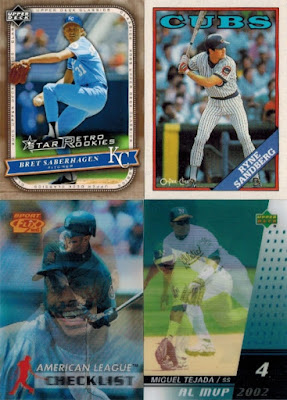 It's a loooooong day -- and that's not even considering the fact that it was close to 100 degrees here yesterday at high noon.

My local flea market opens at 6 AM, and some vendors have told me they get there around 4 in the morning to set up. The place closes at 3 PM. That's almost twelve hours of sitting there, putting items out and/or waiting for customers (the heat, again, notwithstanding). The vendors in the first few aisles probably get there even earlier than that, as was the guy with cards I stumbled upon in the very first aisle yesterday.

I've seen this guy many times before, but had never seen the quarter boxes he had on display prior to yesterday -- not much of note, though I did manage to salvage a few gems from it (including the D'Backs Grace at the top of this post, a sight which will never look right). 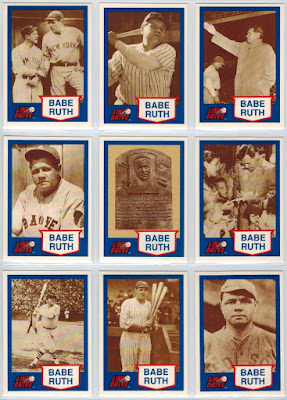 I also bought this complete set of Line Drive Babe Ruths off him for $5 (a good price since, his words, It books for ten...facepalm).

Not the steal of the day or anything, but still nice oddballs I'm glad I bought since I doubt I would've ever seen them again if I passed -- if nothing else, I wasn't ready to let a new Braves Babe Ruth card slip through my fingertips. 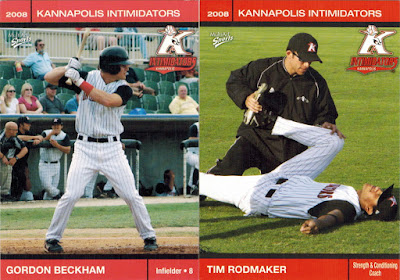 I also wonder how vendors decide to price their inventory.

If I were to set up at a card show, flea market, etc., most of my stuff would be dime-box material (surprise, surprise). I don't have many extras worth more than that. One new guy I came across at the flea market had complete sets sorted across his table by price -- the cheapest stuff was $2 and went up to around $15-20 on the high end. But, oddly enough, his $2 stuff was by far the best.

True, I got a bit skunked with this 2008 Kannapolis Intimidators set -- which I bought because Gordon Beckham (a guy I collect) was on the front -- because it turns out Beckham was the only one I needed, though that Strength & Conditioning Coach card is good for a laugh. 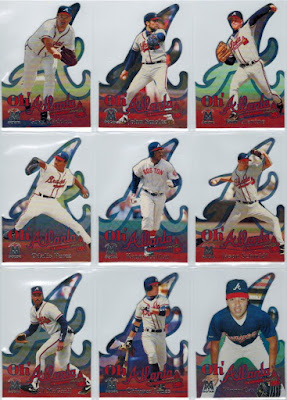 My other $2 purchase was far more fruitful: a complete 30-card "Oh Atlanta" insert set from '99 Skybox Molten Metal (one of the many '90s brands absolutely no one remembers).

In one of the more ingenious insert designs I've ever seen, each of these cards are shaped into the italic A of the Braves' logo. And while jagged edges and pointy corners don't often cooperate with nine-pocket pages, I don't care: these things are just plain awesome.

I saw that Lofton centerpiece (note the throwback jersey!) on Twitter not long ago, and remembered thinking at the time: well, there's another one of those impossible '90s inserts I'll never own -- spoke too soon, I guess. 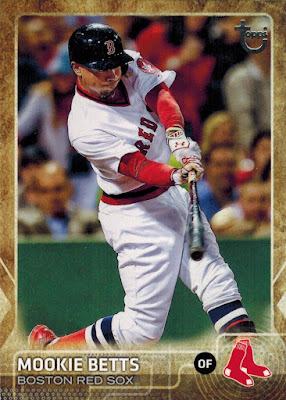 The other thing I wonder with vendors (perhaps more so at card shows than flea markets) is just where the heck they get all their cards from.

One of my regular guys was back at the flea market yesterday, which isn't surprising: he's there every week. But somehow he always has entirely new cards each time -- in fact, I don't ever remember seeing the same card twice from him.

And while the price of his stuff changes every week, this time his cheap cards were 3/$1, making this Mookie Betts throwback variation an absolute steal. 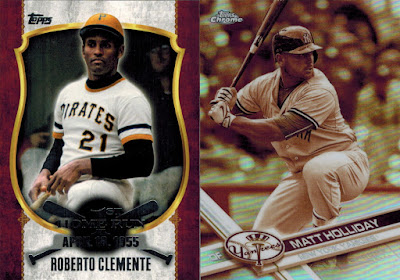 I know a lot of people just have boxes and boxes of stuff in their garages and alternate what they bring with each passing show/flea market.

But with this guy it's kinda puzzling because from what I can gather he's not a huge card collector, yet sometimes, like yesterday, he'll have mostly newer stuff on display. It doesn't seem like he's buying all these packs by himself...or is he? Or does he get them secondhand from a box-busting buddy? Or does he just buy other people's collections?

Maybe I'll have to ask him one day -- all I know in the meantime is that I was all over these two beauties at three for a buck. 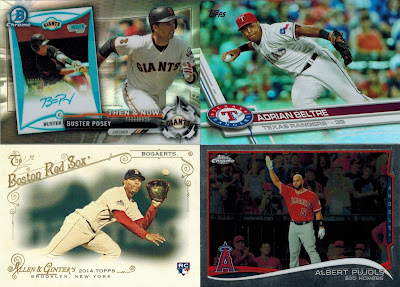 I also wonder just how much vendors make at this flea market.

I'm sure they turn a decent profit since they keep coming back every week. The card guys seem to draw pretty good crowds. I had to squeeze in between a couple collectors who were around my age(!) at this particular table -- in fact, I saw the guy next to me buying quite a few cards I wanted (curse him!).

But I can't much complain, as I still managed to walk away with quite a few cheap gems, including this quartet of 3/$1 goodies. 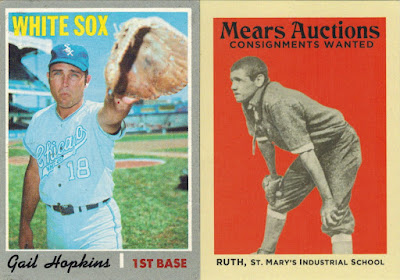 While most of his inventory was centered around recent cardboard, the guy did have a few vintage and oddballs on display yesterday.

The Ruth is actually an ad for a consignment firm (still a card to me, though), and even though I have no idea who Gail Hopkins is, I knew I had to have that oddly beautiful image in my frankenset. 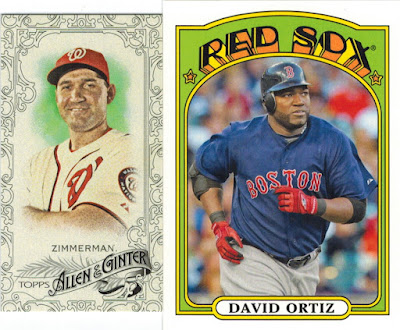 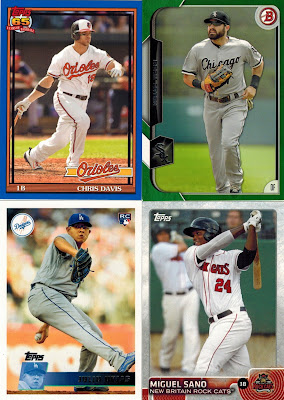 Rookies and parallels at three for a buck -- yes, please! 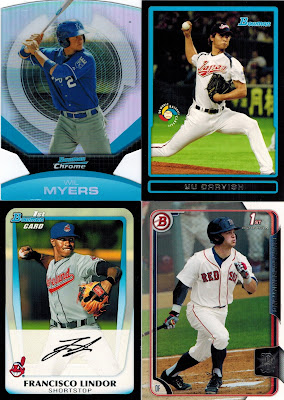 This same vendor also had a separate dollar box on display which I'd never seen before.

A person less careful than I could've easily dropped a mint on these boxes, and I admittedly started to get carried away before remembering that these were, in fact, a dollar each -- not willy-nilly dime box material. And so the hemming, hawing, and ultimate whittling-down began.

In the end, I settled on about a dozen must-haves from the dollar box, including these four early cards of current stars (including a zero-year Wil Myers!). 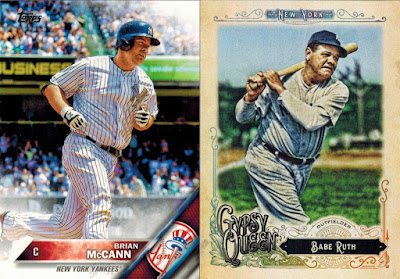 A couple Bronx Bomber SPs, and a continuation of the Ruthian theme that seemed to dominate yesterday's purchases. 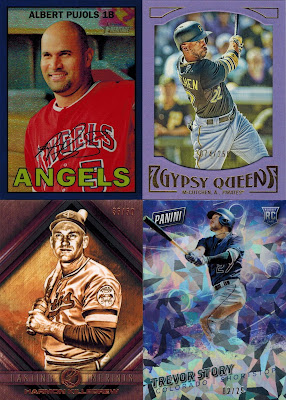 And then a bunch of nifty dollar parallels and/or low-numbered inserts of dudes I collect -- that Killebrew (numbered to just 50 copies) comes from something called Topps Legacies of Baseball, a set I'd never even heard of before yesterday. 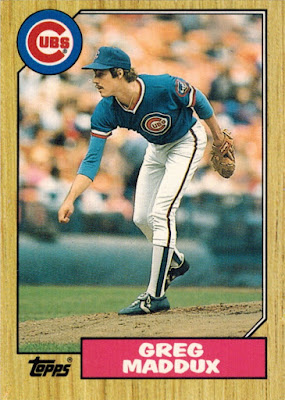 After an unremarkable stroll through the remainder of the flea market, I went back to my regular guy's table to buy a card I'd been eyeing from his higher-priced glass case.

Though I've never been an avid Greg Maddux collector, I always enjoy adding Hall of Fame rookies to my collection. And for three bucks (haggled down from the vendor's original $5 price tag), I managed to complete my Maddux rookie triad, as I now own his Donruss, Fleer Update, and (now) Topps Traded '87 rookies.

I would love to one day set up at a card show and/or flea market and experience the role of such a setting from the vendor's point of view -- for now, though, I'm happy to be on the buyer's side of things, because, well, it's just a whole lot more fun.
Posted by Nick at 6:11 PM

Great cardboard there. I've never seen that Braves insert set before. If you ever decide to part with let me know.

It's been hot around here, too. Kudos to you for braving the heat and bringing home the goods.
Mr favorite is the Babe Ruth card that shows him as a member of the St. Mary's Industrial School. I've been to the Babe Ruth Museum in Baltimore, which is also the house where he was born. I remember reading a couple of things about him playing for this team.

You could NEVER get up early enough to set up at the flea market,haha!

Those Braves are fantastic! I enjoyed Skybox back in the day. I too, toyed with the idea of the local Sunday morning Flea market. You have to be there by 4am to lineup for a spot. With my back trouble, it just never made good sense.

I've pondered being a seller before as well but if I ever do I just KNOW that I have to do it as a joint-venture with another collector. Mainly to split costs and to make sure I don't just slack off since I don't want to let the other person down.

Although if I had to guess it's probably not that easy and people keep wanting something for nothing. I remember someone saying it's a lot easier to accumulate this stuff than it is to flip it :P.

As I posted a while ago, I tried it once at my local monthly show. Took all my extra set singles, star cards, and thought I had marked everything pretty well.
Didn't sell a single card.
Most of the half dozen guys that paid any attention at all were looking for shiny prospect cards or high end and not much else. Really made me feel that set builders really are a small minority these days.

I used to set up at shows back in the early 90's...some shows I did ok, but most I didn't even make table. I've considered doing it again, but this time would only have a bunch of dimeboxes. The guy that runs the card show in my area has mostly dimeboxes and his tables are always full of people going through it (although admittedly, he has better stuff than I do).

I've set up at shows and flea markets probably 20 or so times in my life. Rarely have I ever made enough to cover my fees, not to mention the amount of the time that I put into it. For whatever reason it seems like at card shows if you're not a regular seller, it seems like people will pass you buy. If you do, I wish you nothing but the best of luck!

I've set up at the flea market probably 5 to 7 times over the past decade or so. I wish I could say they were positive experiences, but honestly... it kinda sucks. Well... for me, it sucks. There just weren't enough people interested in the cards I was trying to dump. I would have been better off putting up an ad on Craigslist. Then again... I did keep my buddy company and we got a chance to hang out. But at the end of the day, I've only had a few days where I walked home with more than $50 in my pocket. Most of the time, I barely cover my spot and I end up packing up 95% of the stuff I bring.

With that being said... I haven't given up hope. I'm sure I'll set up at the flea market at least one or two more times just to hang out with my friends.