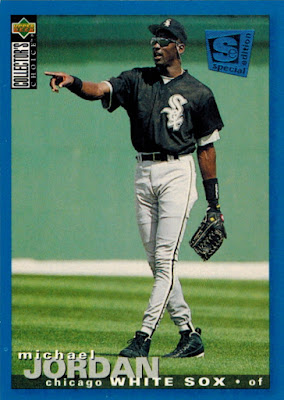 Here's a post I've been looking forward to writing for a while: The Short Term Stops All-Zero Year Team!

I've talked about zero-year cards since the early days of this blog. And for those of you who haven't been around that long and/or might need a refresher on what the heck this zero-year thing is, it's really quite simple: a zero-year card is a card of a player featured on a team he never actually played for.

For the purposes of this post, I've decided to omit all "novelty" zero-year stints from this roster -- while they're cool and noteworthy, the likes of Michael Jordan and Ricky Williams and Eleanor Engle (among others) won't appear here since they never actually played a big-league game with any franchise.

So without further ado, here it they are: The Zero-Year All-Stars, legends of the uniforms they never wore. 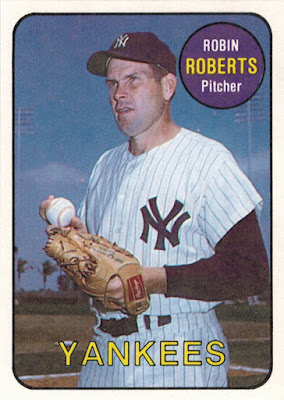 One reason I love zero-year cards so much is that they're cardboard antithesis of the old saying -- they're proof that if a tree falls in the forest, it does indeed make a sound.

As is the case with Robin Roberts's non-tenure with the 1962 Yankees. Many baseball fans thought Roberts was done after a woeful season with the Phillies the year prior which saw him post a 1-10 record to go along with a 5.85 ERA. Hoping the future HOFer had something left in the tank, the Yankees purchased Roberts from the Phils following the '61 campaign.

Roberts did indeed have a few good years left in him -- but the Yankees would never find that out: they released him in May of '62 before he ever play in the Bronx, which, of course, makes this bizarre oddball of Roberts in the Yankee pinstripes a coveted zero-year card. 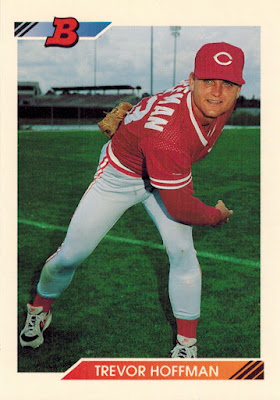 Trevor Hoffman is going to be a Hall of Fame closer one day, but oddly enough, his career began as a shortstop with a team for whom he would never play.

The Reds took Hoffman -- then an infielder -- in the 1989 MLB Draft before converting him to a pitcher after a couple Mendoza Line seasons in the minors. In a shrewd move, the Marlins would pluck him from the Reds in the 1993 Expansion Draft before Hoffman ever got to Cincinnati (though the Marlins would, in turn, deal him to the Padres after just half a season in Florida).

You'd be hard-pressed to find a more chaotic beginning to a Hall of Fame career. 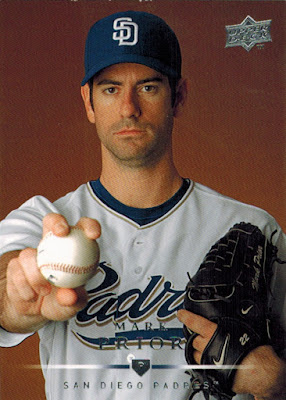 Mark Prior's an interesting figure in my baseball life -- I long loathed him for never living up to his long-term promise as a Cub, but the sight of him in any other uniform kinda disturbs me.

Prior tried valiantly to come back from a series of arm injuries sustained during his Cub years: he spent time in the Padres, Rangers, Yankees, Red Sox, and Reds systems without ever making it back to the bigs, finally hanging up his cleats for good in 2013. This 2008 Upper Deck card is the only one to document any of those non-stints, however.

I didn't know until recently that Prior is now the Dodgers' bullpen coach -- but no, he doesn't look right in that uniform either. 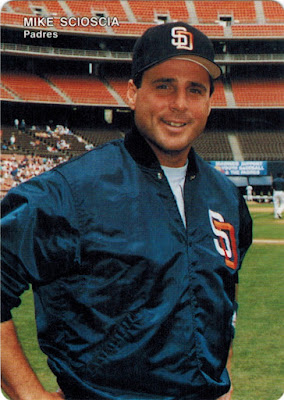 Like the aforementioned Robin Roberts, this Mother's Cookies gem (which I recently grabbed off COMC) is an extremely rare example of a zero-year oddball.

In what must've seemed close to blasphemy at the time, Mike Scioscia signed with the Padres in 1993 after having spent his entire career with the Dodgers up to that point. Unfortunately, Scioscia tore his rotator cuff in spring training that year and never did suit up for the Padres.

He'd retire after an aborted stint with the Rangers the following spring (I don't think any zero-year cards of that one exist), and while time will tell if Scioscia is better known as a player or manager in the years to come, I doubt anyone'll remember him as a Padre. 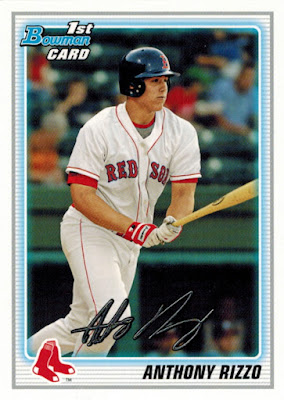 I've already talked about it quite a bit before on the blog, but Anthony Rizzo is one of my favorite guys to collect, partly because he does indeed have a zero-year card to his name.

Drafted by the Red Sox in 2007, Rizzo would never actually play for the franchise -- he was shipped to the Padres three seasons later in the blockbuster swap that sent Adrian Gonzalez back to Boston.

The Padres, of course, would deal him to the hometown Cubs a little more than a year after that, and we Chicagoans are eternally grateful for that. 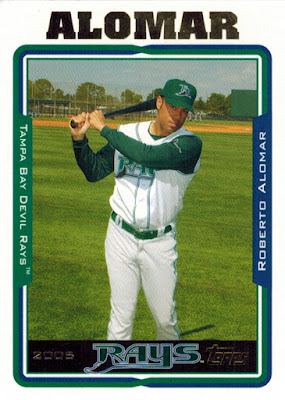 Here's an odd one: Roberto Alomar as a Devil Ray?

The fact that this card exists at all is puzzling: it was part of Topps Series 2 checklist in 2005, issued well after Robbie had retired following a failed shot with the Devil Rays in spring training that year.

All I know is that, as a zero-year fanatic, I'm glad it exists, even if I don't really know why it exists. 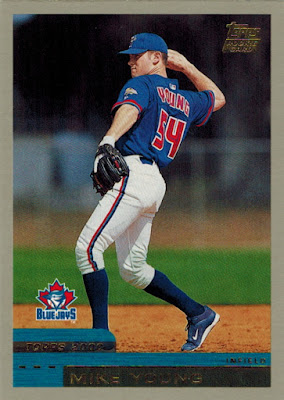 Michael Young may go down as one of the most underrated players of my baseball youth, and his zero-year rookie card has long been a treasure in my collection.

In a deal that I'm sure the Blue Jays would like to have back, Young was traded to the Rangers for Esteban Loaiza in 2000. Loaiza was little more than mediocre with the Jays, while Young would go on to make seven All-Star teams and win a batting title in 13 seasons as a Ranger.

Further proof that zero-year stints are, in hindsight, often tinged with regret. 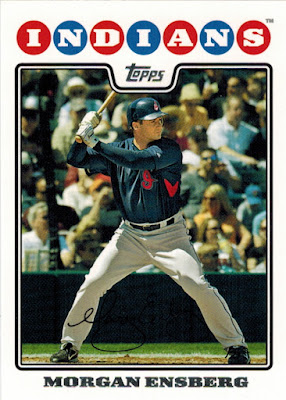 Here's one of those fickle Guys I Collect For No Apparent Reason: Morgan Ensberg.

I honestly don't know why I collect Ensberg, but I do -- this is one of over 100 cards of his I own, and easily the most interesting, as Ensberg never did actually play for the '08 Indians: Cleveland signed him after he'd been released by the Yankees in midseason, and he'd toil in the minors for the Indians for the remainder of the year without being recalled.

Maybe one day I'll remember why I decided to start collecting Morgan Ensberg, but in the meantime, I'm content to sit back and enjoy this fascinating zero-year sunset card. 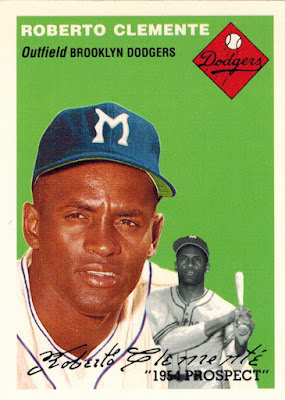 This has to be the greatest zero-year card ever -- I mean, it has to be, given that it's a zero-year of my all-time favorite ballplayer.

It sometimes gets lost to history that Roberto Clemente technically wasn't a career Pirate. He was actually signed by the Dodgers in 1954 and taken by the Pirates in that year's Rule 5 Draft after attempts by the Dodgers to hide him in their minor league system proved futile. The rest, as they say, is history.

While Topps never actually issued a card of Roberto Clemente in 1954, Topps created an excellent Cards That Never Were series devoted to lost '54 subjects in their '94 Topps Archives set, highlighted by this brilliant Clemente -- a man who, in addition to countless other accolades, is, for me, the Zero-Year King. 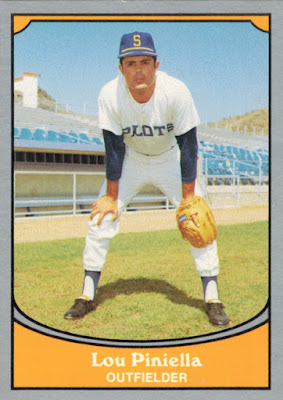 And here's what is probably my second-favorite zero-year card -- Sweet Lou himself, a zero-year Seattle Pilot!

After cups of coffee with the Orioles (1964) and Indians (1968), Piniella was selected by the doomed Pilots in the '68 expansion draft. After somehow not making the club out of spring training, Lou was dealt to the Royals (a fellow expansion team) just prior to the start of the '69 season, where he'd earn AL Rookie of the Year honors that same season.

Given the brevity and overall obscurity of it, I can't believe a card of Lou with the Pilots exists, but I thank the cardboard gods that it does every day. 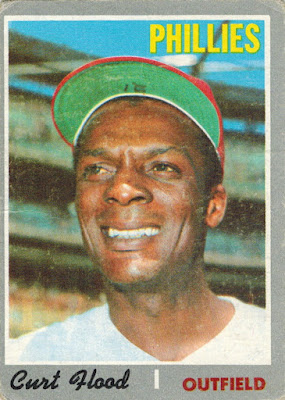 Quite the star-studded outfield here: after Clemente and Sweet Lou comes the most historic zero-year card ever printed.

After being dealt to the Phillies following the 1969 season, Curt Flood famously sat out the following year in protest of baseball's garish reserve clause, eventually taking his case all the way to the Supreme Court. Though Flood would lose the trial and retire after a short stop with the Senators in 1971, his martyrdom would pave the way for free agency just a half-decade later.

Sometimes lost to history is the fact that Flood received a zero-year card out of the deal in 1970 Topps, a hallowed piece of vintage history I'm forever proud to own. 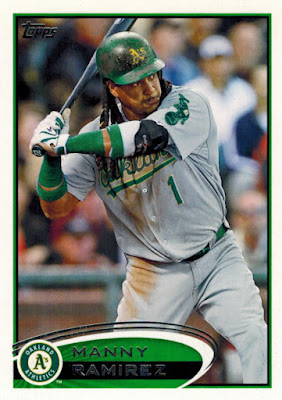 I remember pulling this card from a pack of 2012 Topps and praying that I'd one day be able to add it to my zero-year collection.

My wishes came true: after some hemming and hawing on whether or not to bring him up, Manny was released by the A's in June of 2012 after spending a couple months in the minors. Despite brief trials in Rangers and Cubs minor league systems, he'd never play another big league game.

And so the cardboard career of Manny Ramirez came to an end with a magnificent zero-year card.

And so, also, comes the end of this theme. This is the last Short Term Stops post I'd had planned, and while I may bring it back in regards to current Short Term Stop happenings now and then (Bartolo Colon as a Twin, etc.), I just don't think there's any more rosters left to create. So, for now, I bid my beloved Short Term Stops adieu.

As usual, thanks for tuning in -- I hope you had as much fun reading them as I had writing them.
Posted by Nick at 6:56 PM

This was a great idea!..didnt know about the Flood & Clemente cards!

Great short term stops team yet again Nick. I love all the cards, some of which I knew about others of which I didn't. I think my favorite might actually be that Alomar Devil Rays card, what a fantastic piece of cardboard!

I’vee loved all these short term stop posts. Very well written and thought out. Hopefully you can think of a way to continue them in some way

Several of these I'd dismiss as gimmick cards, produced for the sake of showing them with a team for which they never played (the Robin Roberts, Clemente, Piniella).

I like the cards like Curt Flood much better, in which the plan at the time was he was gosh darn going to play for the Phillies. That's why I like the '77 Topps Bill Greif Expos card so much.

I love these posts, I have the 1993 Pinnacle Scioscia, didn't know about the Mother's one.

This has been a great series...just this past week or so I've been re-reading it (after reading some early ones I had missed) and even leaving a few hindsight comments. So much history here.

I was hoping to see the 1972 Art Shamsky as a Cardinal, but I can't see what card I would choose to get rid of here.

BTW, the day on which Trevor Hoffman will be a Hall of Fame closer is July 29!

Always love this series and sorry to see it come to an end.

I still think you should do short-term stops and similar zero-year teams **that never appeared on a card** and I could make customs for them. Maybe a project we could work on together one of these days.

Great stuff as usual. I was thinking the whole time that that Canseco would be your left fielder, right fielder, or DH... since he has cards with the Angels but never actually played in any games for them during the regular season.