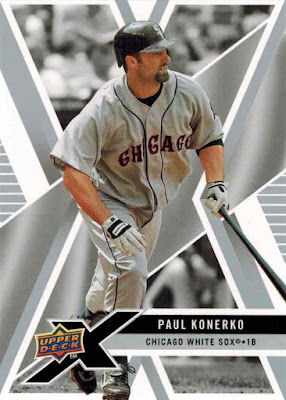 So here's some unfortunate news: as far as cataloging my card collection is concerned, I'm pretty much back to square one right now.

A few years ago, I wrote about my excitement over discovering a site called Zistle, which allowed me to comfortably and efficiently document all my various collecting projects (mainly my mini-collections). But once again, the internet proved the whole we-can-never-have-nice-things aphorism true: as people who use(d) Zistle know, the site was bought out by Beckett and basically left to die amid copyright issues.

For lack of a better term, this sucks ass. Like many, many others, I put a lot of time, effort, and enjoyment into getting my collection together via Zistle. Not to mention that it damn well came in handy: while I pride myself on having a fairly good memory in relation to my cards, Zistle helped me fix my brain's missteps by showing me my collection(s) right then and there with nothing more than a few clicks.

Recently I was reminded of how much I missed Zistle by my buddy Jeff of "2x3 Heroes" fame, who, a couple months ago, was flying through the airport and stopped by the bookstore to chat and drop off a few cards he had for me. 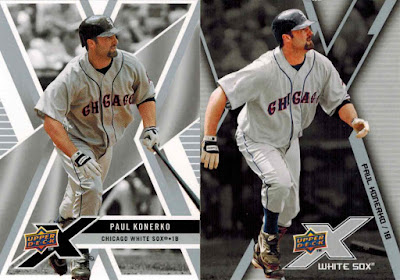 While it's a cool card and I was happy Jeff had an extra copy to spare, I was about 98 percent sure I had the 2008 Upper Deck X Paulie at the top of this post already.

When I got home later that night, I discovered I was wrong, and that I actually needed the aforementioned Konerko, though I hardly faulted myself: Konerko's 2009 Upper Deck X card (which I indeed already had) features almost the exact same image with the same throwback jersey on an eerily similar design (sometimes I think card companies do these kinds of things to us as some kind of sick game).

Had Zistle still been its usual lively self, none of this confusion and shock would've been necessary. 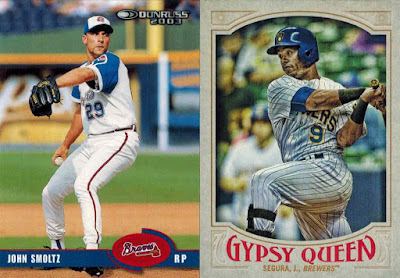 True, Zistle isn't technically dead: I could still go on there right now and add these two new throwbacks from Jeff to my collection page if I so desired.

But it hardly seems worth it at this point, seeing as how it appears inevitable that Zistle will be gutted and/or shut down sometime soon. That, and new sets aren't being uploaded, which means that anything added to my mini-collections from late 2017 and forward was, is, and forever will be painfully absent from my collection pages.

As far as I'm concerned, to continue using Zistle at this point would only lead to wasted time and eventual despair. 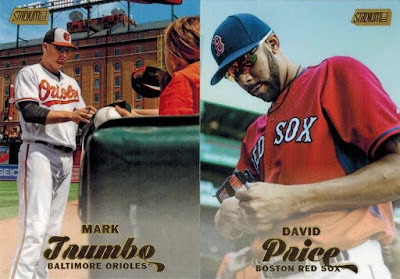 So comes the inevitable question: what now?

Zistle was the first time I'd ever undertaken the massive task of cataloging my collection (even if only a portion of it). And while I enjoy giving myself card projects to complete, I don't know that I have it in me to do it all over again, at least not with the same level of time and commitment I put toward Zistle.

And even if I did, how would I do it? I've experimented with the Trading Card Database a bit, but I don't find the site very navigable or friendly with what I have in mind for my own cataloging means. 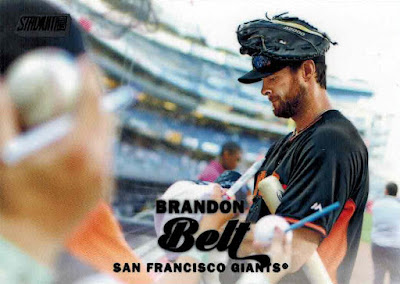 I guess only time will tell.

I'll probably tinker with a few things in the coming days/weeks/months, especially now that I have a bit more extra time on my hands. I'm leaning towards just opening some sort of spreadsheet and see where that takes me (although you can count the number of times I've actually used a spreadsheet in my life on one hand).

For now, I'll have to rely on my own memory and shake my fist at the tyrant known as Beckett whenever I acquire new items for my various collections, including everything you've seen in this post from Jeff (especially Stadium Club base/parallels/whatnot, because wow is Stadium Club packed with mini-collection stuff).

All I can say is: RIP, Zistle -- I'll always have you to thank for getting me off my lazy, disorganized butt and showing me that, against all odds, cataloging my collection could actually be fun.
Posted by Nick at 6:15 PM

I agreed that TCDB isn't really all that user friendly. I mainly use it for searching for info on card sets, checklists, and the like. Like you, I'm considering working on a spreadsheet that helps me catalog everything. I'm not sure how I can piece it together yet but if I do end up putting something together, I can email it over to you in the hopes that you might find it useful as well.

Yeah, Zistle's slow death was a real kick to the groin. Still haven't completely gotten over it, but I've gotten used to TCDB over the course of time. I've found it to be way more reliable than Zistle since it's actually monitored and upkept by a team of admins and dedicated users -- meaning accurate checklists and thorough parallel/insert listings for all sets. Not to mention some level of expectation in terms of scan quality. But, yeah, if I ruled the world, Zistle would still be humming along happily--and all of us with it.

I still have a hole in my heart from the loss of Zistle. TCDB took some getting used to, but it's my go-to now. They have added some new features that allow for mini-collections, but I haven't tried them. For someone like you who is entering a collection from scratch, it might be worth it.

That stinks...but spreadsheets are (were) pretty easy to use...i meticulously noted all my music bootlegs on there for collecting/trading...

Sorry you had to deal with this. I didn't start cataloging my collection online until Zistle was on the downhill side, so I never did use it.

I will say that TCDB recently added a feature for multiple collections; for example, I now have a "main collection", as well as separate ones for autographs, minor league cards, Reds, player collections, and set builds.

A spreadsheet wouldn't be a terrible way to go either, but I can never get myself to keep up on those!

I use my google sites (my website) to list my want or haves and I also still use excel spreadsheets, and to top it all off I have notebooks for each brand and then a master notebook with want lists too. I've never backed up my collection as I am changing it by hundreds of cards every day. One of these days I will be all caught up updating (ha). Then I'll store on a flash drive, but not until I'm all caught up. So in the mean time I have to check all 3 sections which is awful. I hate not being techy, and at the same time I would go nuts without a handwritten paper copy. You'll figure out what's best for you, you know it.

For anybody who uses spreadsheets or is thinking of doing it, I did a post on how I load Topps' PDF checklists into an Excel spreadsheet:

I'm thinking it's about time to update that post, but for now, that's what's out there.

I am with you, I still have not recovered from what happened to Zistle. I dove into TCDB but it's way less user friendly and honestly, it's an just an ugly site. I have started an overly complicated serious of folders with scans for Rockies and Redskins wants and haves, that seems to be working.

Spreadsheets here. Especially powerful once you take advantage of filtering options. I tend to copypasta TCDB's checklists to plaintext (the team checklists there are especially useful to me as a team collector) and use search/replace to eliminate all the extraneous tab characters. Then paste those into my own Google sheet.

I've also begun using those sheets to track trades and purchases (especially COMC ones that might be sitting there for a few months before I request a shipment) since the spreadsheet =countif() functions make it easy to automate what I have, what's coming in, and how much I still am looking for.

That sucks about Zistle. Sorry to hear about that. I have been amazed at how well TCDB is self-policed and really user maintained. I liken it to Wikipedia. I agree, the website is somewhat rudimentary and I would not be surprised if they have a major overhaul in the near future to absorb and integrate easier functionality. I have yet to dive into it to track my collection, but I have uploaded images and added checklists which takes some getting used to. If COMC and TCDB ever merged, my mind would be blown.

I use spreadsheets too. Good skill to learn anyway, and a fun way to do it.

My want lists are thoroughly documented in many forms. But I've never tried to list out what I have. It would take months. Just in the last few years, I've become aware that I can't keep it all in my head like I used to. And I should at least catalog the good stuff for insurance purposes. A lot of it would be sets - complete and otherwise, but my player collections and Redskins would be very tedious. Too many oddballs and bulk to get counted.

I tested out Zistle earlier last year when I was trying to catalog my player collections. That is until I discovered most cards from 2017 wouldn't show up, to which I later learned that Becket bought them out. I currently use google spreadsheets. Nothing too glamorous, and I do wish the cards had photos like Zistle did, but it gets the job done.

Seriously envious of anyone who has cataloged their entire collection. I can't even begin to imagine doing that. In fact... I wouldn't even know where to begin.

Sorry to hear about Zistle. Hope something else pops up for you.

A little late to the party here, but I was crushed by Zistle's demise. Probably the one hobby site I enjoyed even more than COMC, and that's saying a lot. I've been slowly migrating the 40,000+ cards I had catalogued on Zistle to the Trading Card Database. I agree it's not as user-friendly, but once you figure it out it's actually a pretty useful site. I'm also taking this chance to trim down the collection, as I move each batch of cards over I ask myself "do I REALLY need or enjoy these?". If so, I move 'em to TCDB, if not they go into a giveaway pile. Got about 18,000 cards entered in my collection on TCDB so far, long way to go still...

Could anyone start up a new site? Or would they immediately just get sued no matter how they get the public info?

Starting a new site is possible, the problem with doing it is that anything new will be extremely basic and unpolished until a few people decide to help out and 'kick the tires'. Being a developer, I find most of the functionality needed within my skillset, but lack the people to help test and use such a system to really get it going