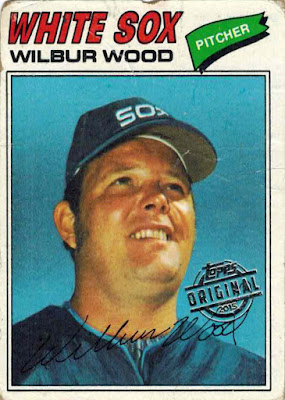 One reason I enjoy the blogosphere is because many of you cause me to question things I immediately write off as stupid or pointless.

Buybacks are a prime example of this. Whaddya mean you're just stamping old cards and putting 'em in new packs?! THAT'S DUMB! And maybe a part of me does still wish that Topps would put some actual effort into creating a worthwhile insert set rather than just passing off late '80s singles as chaseable (is that a word?) cards.

But off the top of my head I can think of at least a half-dozen bloggers who have undertaken various buyback projects of their own, because there is fun to be had with buybacks. You half-dozen kind souls have caused me to take a step back and realize that I, too, must admit: I'm starting to actually kinda like buybacks.

How much, you ask? 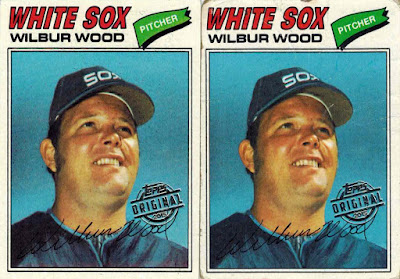 So much that I've actually started to acquire double buybacks (bro).

Jim (aka GCRL) of "Cards as I See Them" fame was nice enough to send a '77 Topps Wilbur Wood buyback my way recently. Buybacks especially come in handy for guys like Wilbur because I don't get a lot of chances to add to my collection of his these days -- I mean, when's the last time anyone made a new Wilbur Wood card?

Trouble was I'd already pulled the very same '77 buyback from my blessed box of 2015 Update, but on the bright side I've already forwarded it to one of the many buyback-minded bloggers in our community. 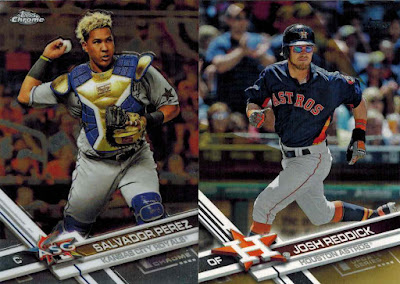 But Jim went above and beyond mere buybacks with this package, even adding a few 2017 Update offshoots to my binders with the Chrome Perez and Gold Reddick here.

The Update Chromes were gone from my Target before I even had time to check the shelves, but they've been surprisingly easy to acquire in the months since via dime boxes and the like -- guess most people kept their Judges and purged everything else. 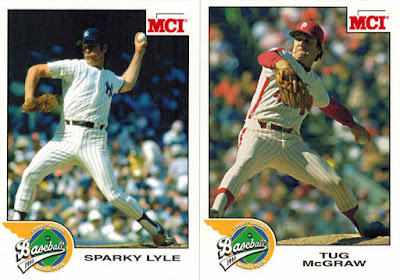 More than perhaps anyone else I trade with, Jim always manages to send me something I've never seen before.

Case in point: these two famous firemen, courtesy of some brand called MCI. According to my Big Beckett Book, these were distributed for a few years in the early '90s to military personnel during an ambassador tour in which a handful of former ballplayers visited army bases.

The thrill of adding new oddballs to the binders never gets old. 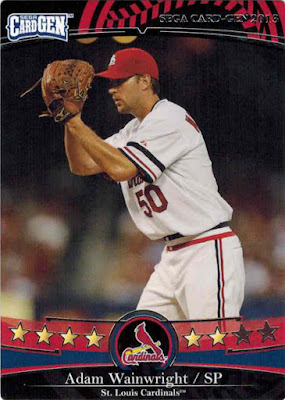 And here's another set I'd likely never have discovered without the blogs: Sega Card-Gen.

Most of the dozen or so singles I own from this set came from Mr. Zappy and his Japanese ties. This, however, is the first non-Zap Card-Gen I've received, a fantastic new overseas hit to my Adam Wainwright player collection(!) with a throwback jersey(!!) thrown in for good measure.

All this just highlights the question I ask myself every day: where the heck would my collection be without the blogosphere?!
Posted by Nick at 6:16 PM

The way I look at it, buybacks are more interesting at least than the majority of Topps’ inserts the past few years (my own humble, biased opinion). This is the second buyback-related post I’ve read in the last five minutes!

I wasn't a big fan of the buybacks at first but like you (and many others), I've come to appreciate them.

I actually still think buybacks are dumb, and don't see the point in collecting them except for my buyback project. It's the only way I've been able to find a purpose for them. Otherwise, why not get the actually non-stamped card?

It's happened. You've finally received a SCG card from someone other than me. That means I don't have to send them anymore (not that I have any left anyway) lol.

I really like the 2015 buybacks but not so much those from 2014 or 2016 or 2017. I'm glad they are no longer in flagship or update but I am looking forward to Bill Russell rookie buybacks in next year's heritage

According to TCDB, the last new card of Wilbur Wood (not considering a buyback to be a new card) was a Leaf Cut Signature in 2012. Before that you have to go back to 2005 Topps Pristine.

I'm not the biggest fan of buybacks, but I'll grab them if they're cheap. I do have one saved eBay search for a rookie card from the 80's that I really want. Other than that... I don't really go out of my way to hunt them down.