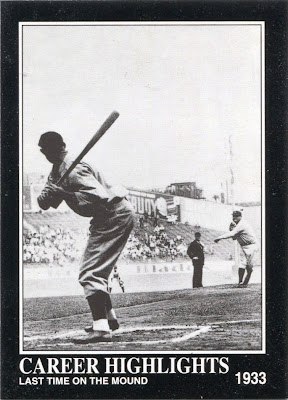 In what has become a running theme over these past couple weeks, I was the gleeful recipient of yet another example of reader generosity.

Reader Mike P. dropped a healthy box of cardboard on me a few weeks ago. It's not the first time he's done so (or the second, or the third), and each passing bunch seems to surpass the one before it. This may have been Mike's finest selection yet.

This particular box contained about eight team bags stuffed with cardboard. Those eight bags, in a lot of ways, reminded me of one of the major reasons I'm such a fanatical collector.

Because these little pieces of cardboard make me feel like a kid.

I'm sure that's part of why Babe Ruth decided to take the mound for the Yankees on the last day of the 1933 season. He wanted to relive his days as a young fireballer with the Red Sox. "The Great Bambino" pitched a complete game in his last appearance on the mound (remember those?) and earned a 6-5 win over, yup, the Red Sox.

This magnificent piece of history is the first Yankee card I own of the Babe that features him on the mound. 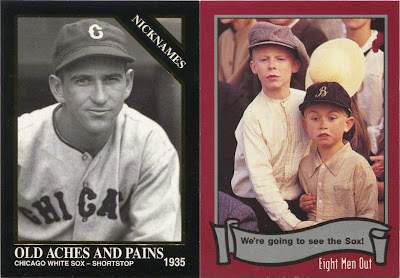 These cards brought back memories.

Eight Men Out was one of the first baseball movies I ever watched, and it triggered a lasting fascination with the 1919 White Sox that has stayed with me to this day. (Although I didn't discover the corresponding card set until much later.)

One of the first things I did after my re-entry into the baseball card hobby around 2005 was buy a 36-pack box of 1991 Conlon Collection. I picked it up for around twenty bucks, and I still rate it as one of the finest purchases I've ever made.

And, thanks to people like Mike, I still find new cards from the Conlon brand here and there. 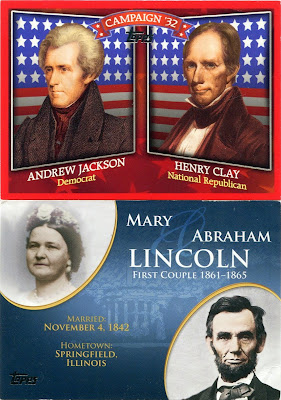 History was one of my favorite subjects back in grammar school.

Cards like these have helped sustain that interest throughout my collecting years. 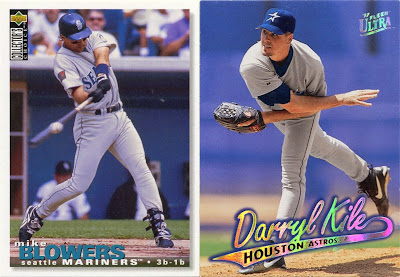 Collector's Choice and Ultra were two of the first sets I ever saw when I first started collecting in the late '90s.

If you've read this blog at all, you might already know that I'm still a huge fan of both brands here in 2015.

It's funny how many of my youthful interests have stuck with me over the long haul. 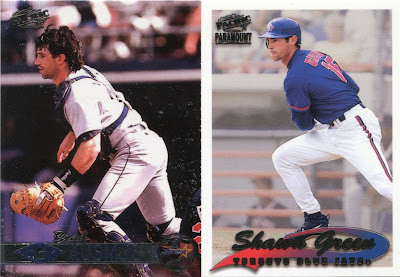 I got into Pacific at an early age as well.

The brand has been defunct for a while now, and I know it doesn't have a ton of remaining fans these days. Pacific had its fairly innocent base designs, but it wasn't afraid to get a little crazy. The brand wasn't afraid to experiment.

The kid in me has always hoped for a Pacific revival. 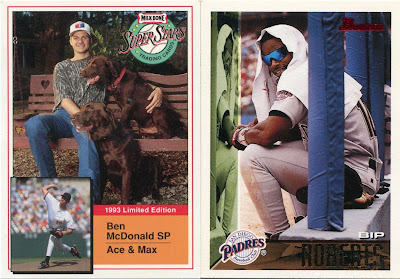 I was brought up in a household that cherished pets.

I never owned a dog, but my family has seen a number of cats, a handful of fish, and even a hamster (and a couple birds, although I was far too young to remember them at the time).

I loved my pets, and I know Bip would've too. 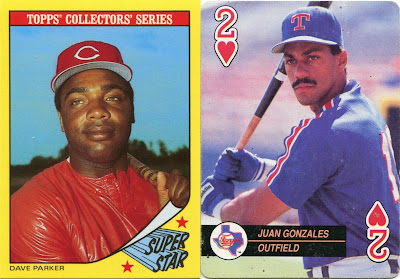 Oddballs are a fairly recent craze of mine, but I've always had somewhat of a passing interest in them.

It's true that I go nuts for cards like Topps Super Stars and playing cards (with misspelled last names) nowadays, but I don't want to give the impression that I completely ignored oddballs as a young collector. They just weren't as high on my radar then. I was much more into jersey and autograph cards. 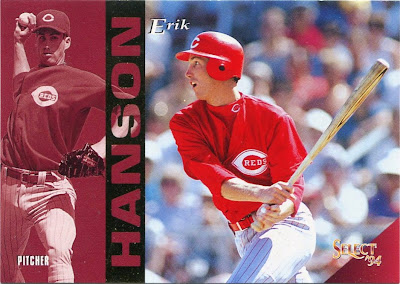 Part of me has always been a mini-collector.

I just hadn't given it a name until I started blogging. My mini-collections were, as I articulated it, "cool cards" to me as a youth.

Shots of pitchers hitting were just "cool cards" to me as a nine-year-old. 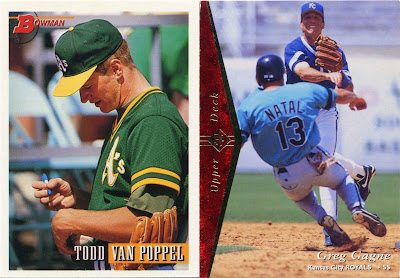 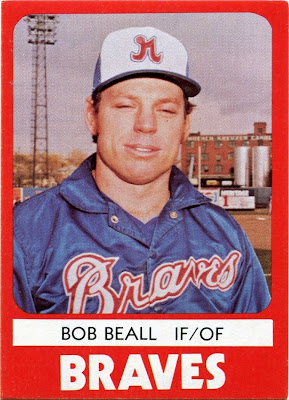 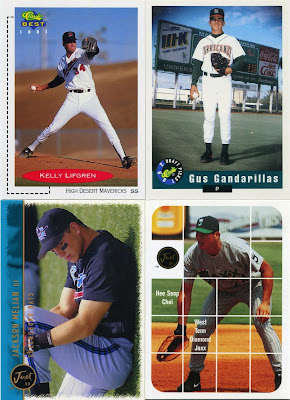 In all seriousness, minor league cards were cool to me as a kid.

A lot of the first packs I ever opened were of minor league sets. They were always the cheapest. And, despite the fact that I'd never heard (or would never hear) of 95 percent of the guys I pulled, I still couldn't get enough.

Even now, minor league sets are responsible for some of the most interesting cards in my collection. Shortstops pitching, players stretching (that card will screw with your mind if you look at it for long enough), the whole nine yards.

Here's to the minor leaguers. 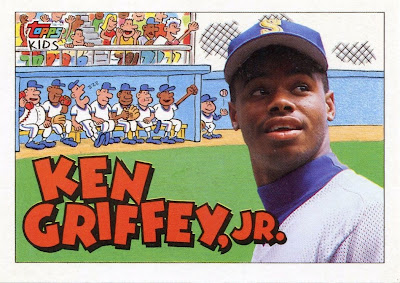 This was already a five-star box even before I opened the last three team bags that Mike included.

If such a thing is possible, those last three bags made it a six-star box. Each of them were filled to the gills with nothing but 1992 Topps Kids singles.

To my knowledge, I've never mentioned any sort of desire to obtain more cards from the set, so I'm guessing Mike went on a whim here by assuming it'd be up my alley. 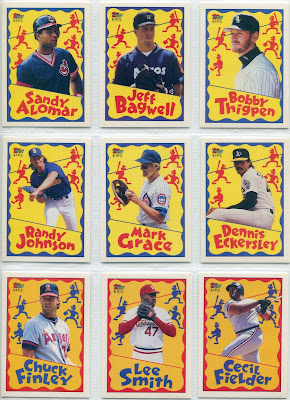 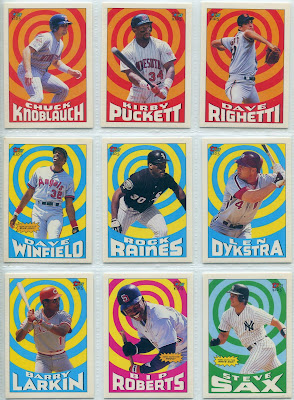 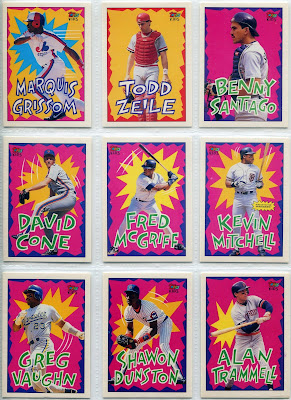 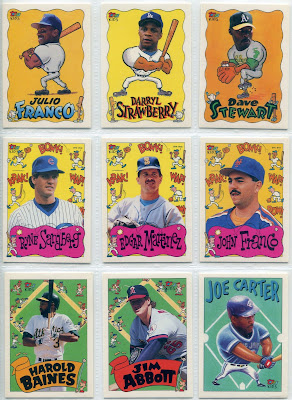 I've always been forced to basically admire this set from afar because I've had a tough time finding any for myself.

I think only four or five of the singles from those three jam-packed team bags were dups. The rest were all needs.

I tend to enjoy sets that use a few different designs within the same checklist, and Topps Kids did that to a T.

Each of these crazy templates seems crazier than the next. 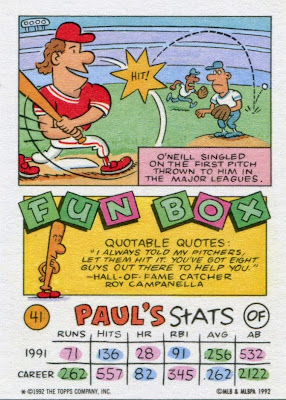 Even the backs are gloriously wacky.

I know a lot of sets in the past have tried advertising towards younger collectors with little avail, but it seems to me that Topps Kids really was for the kids. I can't imagine adults buying much of this.

If I was a kid collecting in 1992, I would've used every cent of my allowance to grab packs of the stuff. Screw hot dogs and Butterfingers. I'm spending my money on Topps Kids.

Of course, I say this as a 23-year-old card collector in the present day. Still, with people like Mike around to send boxes like these to me, I guess I'll never lose that youthful punch.

As is the charm of baseball cards.
Posted by Nick at 2:55 PM

I had a couple Topps Kids as a kid.I never had enough of them to fill up a whole page ,though.looking at them together now ,and they're pretty awesome looking!

Wasn't a fan of Topps Kids back in 1992... but now I think they're awesome. I hope to one day cross paths with a complete set on one of my trips to the local flea market.

I was a 12-year-old in 1992, and thought Topps Kids was awesome. The advantage to buying those is that they were priced cheaper than flagship Topps (and definitely cheaper than Upper Deck), so you could get more bang-for-your-buck. I was not concerned (or even aware) that these were "low-prestige" cards. A pack was a pack to me. Glad to see these on your blog.