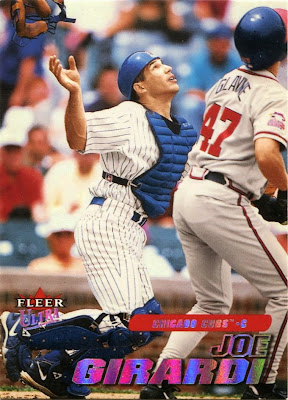 It gives me great pleasure to announce that the local flea market season is officially back in swing here in Dime Boxedonia.

Some of my more tenured readers probably know how excited I am about that. But, for those who only recent came across this little blog, I'll just say that the flea market is pretty much my happy place of cardboard heaven on select Sundays during the summer months.

There are almost always vendors with cards to dig through, and there aren't many ways to better spend a summer afternoon. While the flea market had been open since early April, the important combination of time, weather, and money hadn't matched up until this past weekend. (It did drizzle a bit, but nothing major.)

As my longtime readers know, there's always good cardboard to be found at this place. A lot of miscellaneous junk, sure (no, I don't want your VHS copies of "Top Gun," thank you very much), but you'll find some gems if you dig hard enough.

The first vendor I'll discuss here today was actually the last one I stopped at on Sunday. He had a small box of quarter cards on display, and, while I only came away with four cards in total, it put a nice little cap on an afternoon well spent.

This semi-"pitcher at the plate" mini-collection hit (note Tom Glavine in the foreground) was one of the quarter suspects. 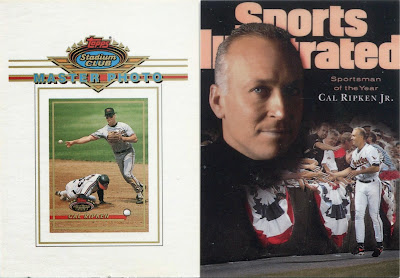 There were lots of Cals in this box, but most were of the '88 Topps or '90 Donruss variety.

Luckily, a little further investigation turned up a few stellar and harder-to-find cards of The Iron Man. Oddly enough, I'd just been browsing through a gallery of those Sports Illustrated cover inserts the night before I attended the flea market. 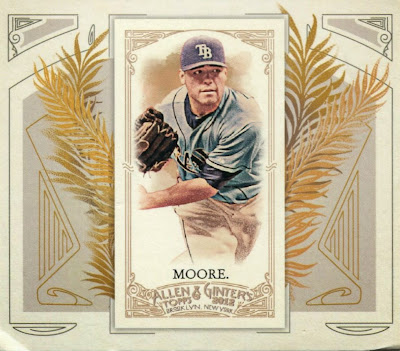 Two of my regular flea market card vendors set up in the same aisle.

We'll get to the second of the two in my next post, but for now let's take a look at what I found from the first guy. He usually has three or four dime boxes on display, but doesn't usually get a ton of new cards in stock. I recognized a lot of what I sifted through on Sunday from last year's flea market trips.

But there was enough new material to salvage the dig after all. After the dust settled, I came away around fifty nifty cards from him for a wrinkled five-spot.

This oversized Matt Moore cabinet card is a little dinged up, but I gladly forked over a dime for it. 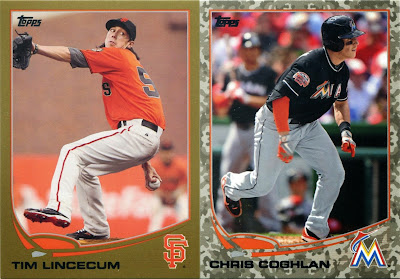 A decent portion of this guy's boxes is filled with overproduction-era material, which made these two gets all the more shocking.

I'm a big Lincecum fan, so that gold parallel was a particularly exciting find. On the contrary, I'm not much of a Chris Coghlan collector, so I'd be happy to set that camo parallel aside for anyone who wants it.

And if you're wondering why I'd pick up a card of a guy I don't collect, let me ask you this. Would you pass on a camo parallel if you found one for a dime? 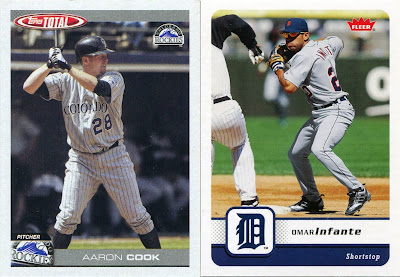 A couple for the mini-collection archives.

I feel myself start to swoon whenever I see Topps Total. 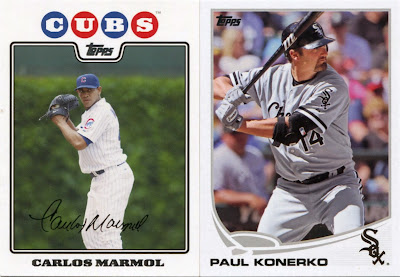 These are both from various retail team sets issued at local big box stores.

I don't think I have any gray hairs yet, but, if I did, I'd blame Carlos Marmol and his infamous three-walk saves from back in the day. 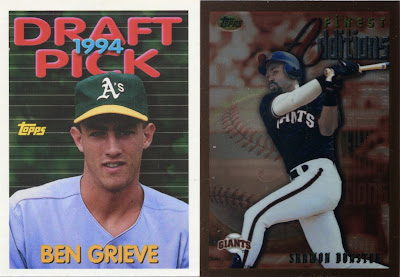 Anything from the mid '90s is always a plus when it comes to dime boxes.

I've subconsciously started to pick up rookie cards of failed prospects in recent years, and Ben Grieve may be near the top of that class. People were willing to spend north of twenty or thirty bucks for his '94 Topps Traded rookie at one point.

They could've just waited twenty years and nabbed from a dime box, like I did on Sunday. 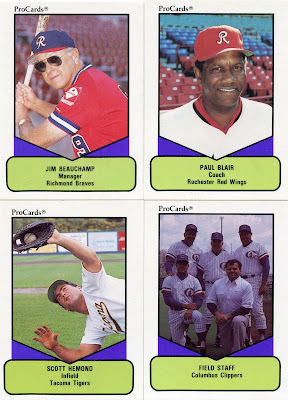 One of this vendor's new additions was an entire row of early '90s minor league cards in one of his 3200-count boxes.

Part of me was hoping to find a rare, pre-rookie Mariano Rivera issue (or something to that effect) in there, but, in the end, that didn't come to fruition. I wasn't expecting it to. (Although you never know with dime boxes.)

That said, it was far from a failed stack of cards. As I've said before, minor league sets are always good for hidden gems. Managers with bats. Former stars as Triple-A coaches. Awkward staged action poses. Field staffs. 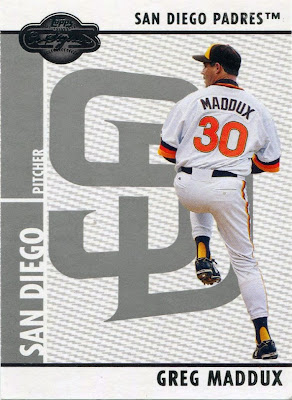 The last of the three vendors I'll be discussing today was located a few aisles down from the others.

I came across his selection a few times last year, but he didn't set up very week. When I found him on Sunday, only about an eighth of his lone 3200-count quarter box was filled. Either he didn't bring many cards, or someone pilfered through his selection before I got there.

If the latter was the case, whoever it was left behind a nice pile of goodies. I bought this Greg Maddux for the glorious '80s Padres throwback. I've actually wanted a copy of it for a long, long time because I think it's simply a fantastic card.

That's the last time you'll hear me say anything like that about Topps Co-Signers. 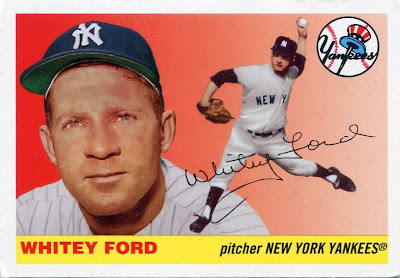 This one had me stumped.

The back informed me that it was produced in 2005 by none other than Topps. But I didn't remember Topps making anything like this ten years ago. It's oversized and printed on thicker cardboard, in what seems like an attempt to mimic the actual dimensions of '50s Topps cards.

Moreover, Whitey Ford doesn't even appear in the '55 Topps checklist, so it's not a reprint. ????

As a little research showed, this particular card was issued to VIP guests of the 2005 National, held right here in Chicago. Along with Stan Musial, Herb Score, and Bob Feller, the four-card set was designed to honor players who didn't appear in '55 Topps due to the infamous Topps vs. Bowman contract disputes. 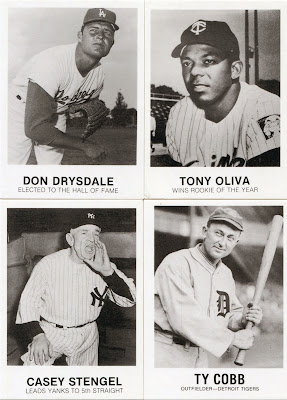 I go nuts for these Galasso Glossy Greats cards, and I found about a dozen of them from this guy.

There's a very back-to-basics quality about this design that I absolutely love. 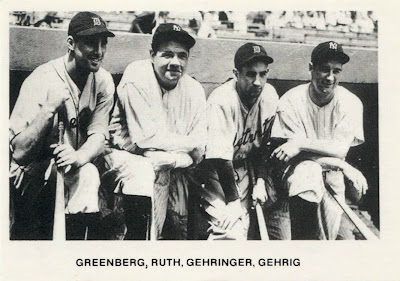 That's a whole lot of star power for just a quarter.

Surely four Hall of Famers should cost more than a shiny Washington. 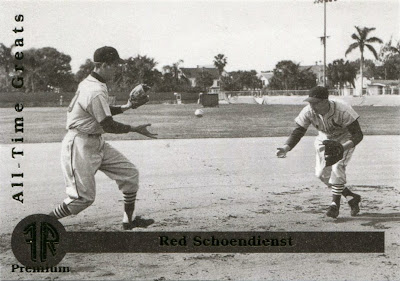 This particular vendor also had a small sampling of glass case items off to the side.

A good portion of the selection was too rich for my blood, but a couple little bagged sets caught my eye near the center of the case. The guy let me take a few out for my viewing pleasure, informing me that this particular company (Front Row) produced five-card oddball sets of select players in the mid '90s.

He had about a half-dozen different sets on display (featuring the likes of Jim Palmer and Catfish Hunter, to name a few) for a buck each, but I only bought two.

I didn't want to spend a ton of money, and, besides, I figured I could always pick up the others during future flea market runs. 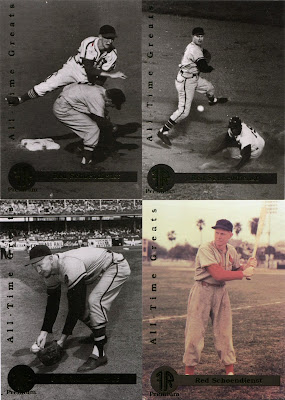 There were three different double dips (including the horizontal card I just showed) in Red Schoendienst batch.

That alone convinced me to take it home with me. 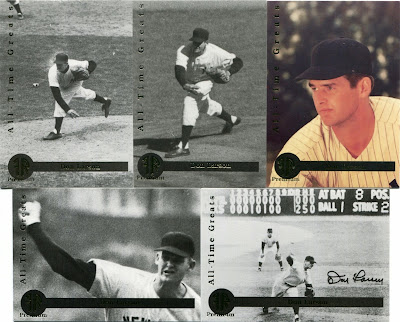 The beautiful shot from Don Larsen's famous perfect game (bottom-right) sold me on his set from the get-go.

The interesting fact that his name is actually misspelled as "Don Larson" on each and every one of these five cards played a role as well.

I always love a good error. 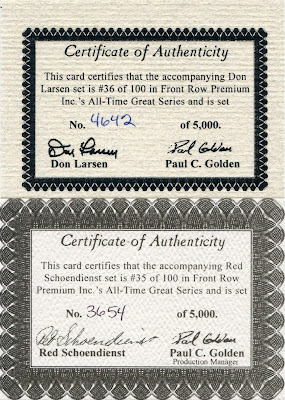 And, hey, they both even came with certificates of authenticity.

That's cold, hard proof, just in case you thought I was lying. 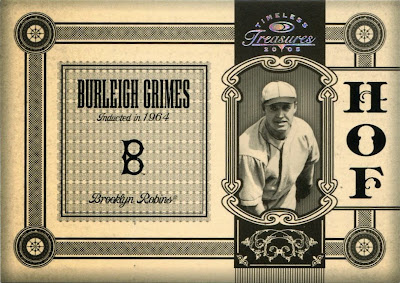 The last of my six dollars' worth of purchases from this last vendor was a numbered insert of Burleigh Grimes, mine for a buck.

All told, the cards I bought from the three vendors in this post cost a whopping twelve bucks. I ended up spending a total of seventeen dollars the entire afternoon. You'll have to wait until Part 2 of this mini-series to see what that remaining five bucks netted me.

I don't know that five dollars has ever been better spent.
Posted by Nick at 7:02 PM

Nick is Happy, great grabs, but of course you always find em.

See, I miss flea markets in the Midwest like this. The ones here for the most part operate year round inside because of the weather (wet and cold in winter, too dadgum hot in the summer). There was (and still is) a big flea market over the holiday weekends in Cedarburg, Wisconsin, where I would go running down aisle after aisle looking for cards, odd collectibles, and the like. I miss that flea market.

I love Galasso Glossy Greats! They bring a feeling of nostalgia. And Grimes? I collect him too, for the same reason - Burleigh Grimes Burleigh Grimes. Super finds! Hope I'm as lucky! The little town I'll be calling home has a seasonal Sunday flea market! A friend of mine finds a card seller or two the regularly. Great post Nick!

I'd love to attend a flea market or swap meet like the ones you or Fuji are always blogging about, but they don't happen around here too often. Plus I have this glorious image in my head of a giant box filled with nothing but junk from the barren wasteland that was the 1980's and 1990's (and not just cards either).

That Whitey Ford and those Galasso glossy greats are incredible! Great dig!

That Co-signers set had some nice base cards in it. You rarely see them because the set was all about autos.

Aw dude, I need to trade you for that Paul Blair. And send you some others for the Palmer set the next time! Email me at QAPLAGCA at yahoo dot com