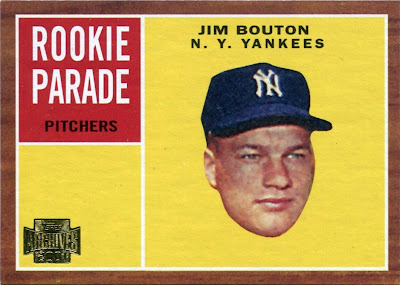 "Someone once asked Al Ferrera of the Dodgers why he wanted to be a baseball player. He said because he always wanted to see his picture on a bubble gum card. Well, me too. It's an ego trip." -- Jim Bouton

I like to think that most players, new and old, still get a kick out of seeing themselves on their very own baseball card.

It probably is an "ego trip" for a lot of guys, and rightly so. Having a baseball cards means you've made it in the game. I like to think it's as simple as that, and that everyone walks away a happy camper.

But, as is the case with most other business practices, it's not that easy. Because that's what baseball cards are. A business. A competitive business. And, like with any business, contracts are bound to get in the way sometimes.

Jim Bouton himself came close to not being under contract with Topps. He held out for more money when he was a rookie after discovering that players were being paid peanuts for their cardboard rights.

They got five bucks, plus an item from Topps's overstock merchandise catalog. 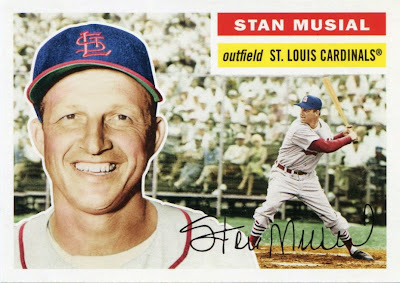 The '50s were a particularly competitive time for the hobby.

Bowman and Topps were constantly trapped in litigation lawsuits throughout the decade. One of the more notable players to get caught in the crossfire was none other than Stan Musial.

Because of his exclusive contract with Bowman, Musial didn't have his first Topps card issued until 1958, when he was nearing the downslope of his career. As a result, "Stan the Man" missed out on some of the most beautiful designs Topps would ever create.

This recent "Lost Cards" insert tries to capture what a '56 Musial might've looked like, but we'll sadly never get to see the real deal. 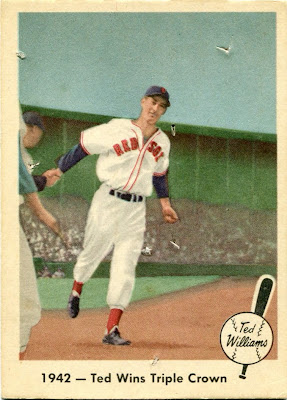 One of the more famous contract battles involves Teddy Ballgame.

Throughout the late '50s and early '60s, Fleer was that annoying wimpy kid who just wouldn't leave Topps alone. They kept trying to market flashy new sets to compete with Topps, but almost all of them went out with a whimper.

Fleer's one victory was getting the great Ted Williams under contract, which meant that the Splendid Splinter didn't have any Topps cards issued in either 1959 or '60, his final two years in the bigs. Instead, Fleer launched an 80-card overkill set in '59 that was comprised of nothing but Ted.

It's no wonder Fleer couldn't last in their early days. 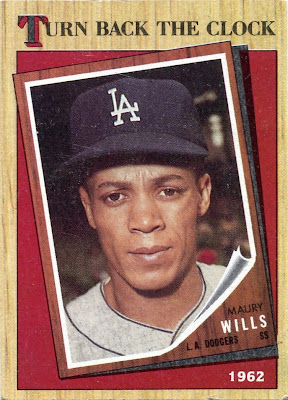 But not all the big contract disputes were limited to the famous Topps vs. Bowman vs. Fleer battles of the '50s.

At first glance, this seems like an ordinary flashback to Maury Wills's 1962 Topps card. The only problem is that the "flashback" card in question doesn't exist. Wills didn't appear in a Topps checklist until 1967.

From what I've read, Wills felt slighted that Topps didn't offer him a contract when he was a rookie with the Dodgers. Topps wanted him when he started to gain a little notoriety, but he didn't want them. You'll find Post and Fleer cards of Wills from the early '60s, but nothing from Topps.

Nothing like Turning Back the Clock to a card that didn't exist in the first place. 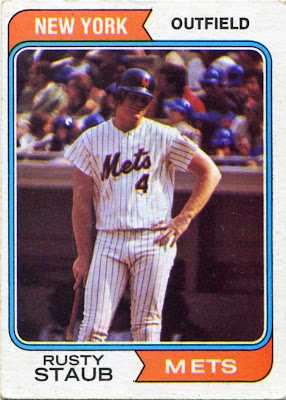 Rusty Staub was a fairly big name in the early '70s.

Why, then, does he not appear in either the 1972 or '73 Topps checklists? (Not counting a cameo on Tommie Agee's airbrushed masterpiece, that is.)

According to a little research I did for this post (working hard at Dime Box HQ), Staub had a personal services contract with the Mets at the time that apparently excluded him from having any sort of relations with Topps. At least Topps brought him back with a bang in '74.

It's one of my favorite cards from that particular checklist. 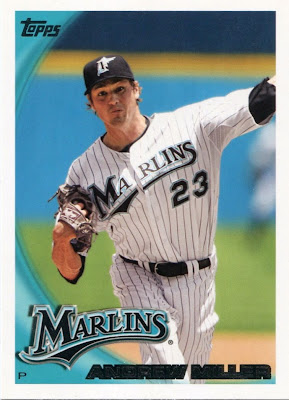 With Topps being the only game in town, contract disputes are still prevalent in today's era.

After a while, you start to notice certain consistencies in the gaps of checklists these days. I can't say with certainty that guys like Matt Wieters or Andrew Miller aren't under contract with Topps, but, given that neither of them have had cards issued in ages, it seems like a logical answer.

Miller is an especially intriguing suspect. Wieters has had cards issued by unlicensed brands as of late, but, as far as I know, Miller hasn't been touched. He's become a dominant reliever over the past few years, and yet his last card in any capacity hails from way back in 2010. 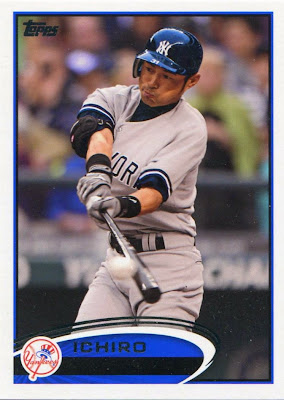 The most notable gap in today's Topps-dominated hobby is definitely Ichiro.

He last appeared in the 2012 Topps Update checklist as a Yankee. We haven't heard from him since, which makes it safe to assume that he's no longer under contract with Topps. Panini has toyed around with a few unspectacular logo-less Ichiro cards in the last few years, but that's it.

It's quite sad that I may never again get to find a card of my favorite current ballplayer in a licensed pack of baseball cards.

I don't know what Topps pays their clients these days. Chances are it's a lot more than that five bucks they were dolling out in Bouton's time. But, heck, give Ichiro whatever he wants already.

In a perfect world, he and Andrew Miller and everyone else would get to see themselves on a licensed baseball card. How great would that be? It's like my dream universe as a collector, and I can't...

I keep having to remind myself that this hobby is a business.
Posted by Nick at 6:33 PM

Miller showed up in Gypsy Queen this year.

I enjoyed the post! Always odd when somebody notable gets left out.