There are a seemingly infinite number of reasons to buy a pack of baseball cards, it seems.

Love for the hobby, unbridled excitement over a new set, eagerness to keep up with the latest and greatest releases in the card market, and so on.

I wish I could say that there was a more positive basis for this afternoon's purchase of a 2015 Gypsy Queen pack from my local Target. I really do. But let's go over the three actual reasons it wound up in my cart.

1) I haven't bought a pack of cards in a few months, so I was itching to bust almost anything. It almost didn't matter what.

2) That said, I wanted to have an outside chance of getting something new. I'm pretty much set on nearly all the base cards from Series 1, Opening Day, and Heritage.

3) It was either Gypsy Queen or Donruss, and Donruss is a hellhole. GQ pretty much won by default.

So that's the rather dubious story of how I wound up with this skimpy six-card, $2.99 pack of cards. 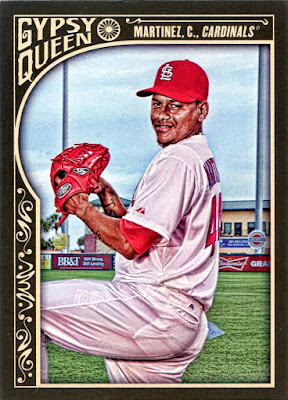 I always feel like I'm missing something with Gypsy Queen.

Lots of other collectors seem to love the heck out of this brand, but I've personally never seen it. I thought the inaugural release in 2011 was halfway decent, but nothing since has been much more than mediocre to me.

While I don't think it quite eclipses it, I will say that the 2015 edition comes the closest to cracking that "mediocre" line in the sand. The borders are still a bit busy for my taste, but this design is a lot cleaner than the LOOK AT ME!!!! templates from past years.

For me, Gypsy Queen hits its stride with these types of Spring Training poses. 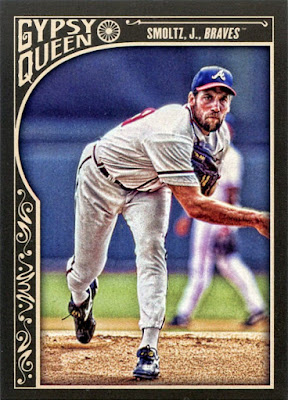 It's cards like these that cause me to sour on GQ.

Gypsy Queen is based on a late 1800s tobacco checklist. If Topps really wanted to honor the set's roots, the photos would be all poses. (Or, even better, perhaps some of the "posed action" studio shots of the 19th century.)

Listen, you know me. I'm a big rah-rah guy when it comes to action shots. But I'm also about making throwback sets feel authentic as possible, and cards like this Smoltz don't do that. Action shots don't belong in a set like Gypsy Queen, if you ask me.

Topps doesn't seem to be able to grasp that. 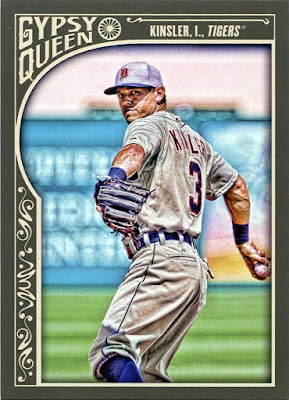 But at least it's one of a guy I collect. 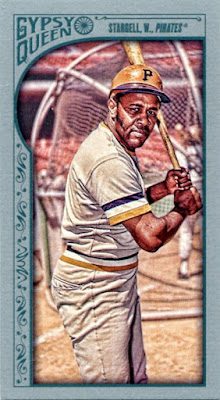 Hey, look at that.

I never pull cards like this. If I do get a semi-rare parallel out of a pack, it's almost always of someone I've never heard of and/or don't collect. Numbered cards aren't the thrill they once were for me, but it's still nice to nab one out of the blue like this, and of a Hall of Famer, no less.

Between this and the Kellogg's issue I picked up on Sunday, it's been a Willie Stargell kind of week around here. 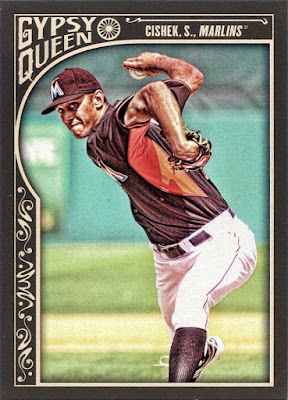 More run-of-the-mill action, although I'll give the sidewinding delivery a little credit. 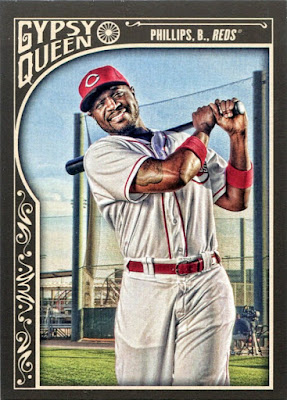 As I mentioned before, I'd like to see Gypsy Queen go all-in with these types of photos. A simple Spring Training back field pose under the bright, blue sky.

That's a winning formula to me.

If you put it all together, though, GQ still isn't my cup of tea. There's just too much meh in this set for me to attach any kind of emotion to it. Even with a pull as nice as the Stargell, I still felt like there wasn't enough bang for the buck at the $2.99-per-pack price point.

In the end, I guess I should be happy that my pack-busting itch has been scratched. And, hey, Gypsy Queen still beats out Donruss every day of the week.

Take that for what you will.
Posted by Nick at 6:27 PM

Gypsy Queen, the only product whose name could be mistaken with a stripper.

Yeah definitely sucks paying $3 for 5 cards and a mini

You would have gotten a lot more cards from that Donruss pack. AND pretty colors.

Congrats on the Stargell!

Very solid pickup. Any chance my man 'Starge is FT?