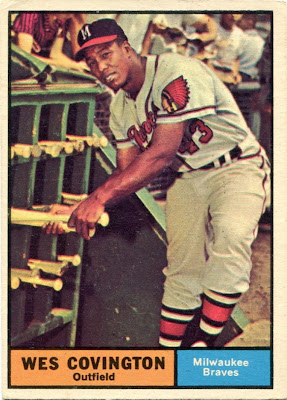 I feel like I'm getting away with something when I send out a PWE.

I can usually fit anywhere from about 15 to 18 cards in an envelope for the cost of a single stamp. That probably shouldn't be possible, but I'm sure not one to complain. It's no wonder I've strayed away from shipping out three-dollar (or more) bubble mailers in favor of the glorious PWE.

Other collectors have taken notice as well, including none other than legendary reader Mark Hoyle. My eyes just about bulged out of their sockets when this '61 Topps Wes Covington fell out of a recent PWE from Mark. It's one of the more classic cards from the '60s, and reminds me a lot of another of my most treasured bubble gum cards.

The ever-generous Mr. Hoyle knew I needed it not because of anything I've ever said on this blog, but actually because of a comment I left on another blog. 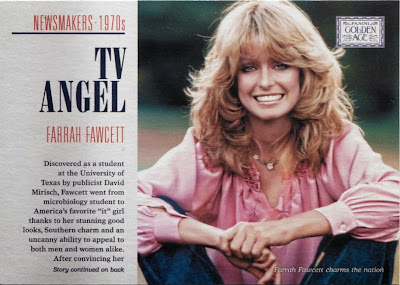 Next up is another PWE I received from reader Mike W. a few weeks ago.

Mike and I have traded a few times, and he seems to periodically send a new batch of cardboard my way. (Have I mentioned how awesome readers are?)

While it was easy to get distracted by the Farrah Fawcett eye candy...

...it was far from the only attention-grabbing card Mike found for me.

Anything that harkens back to the beauty that is 1950s Bowman is always welcome around here. 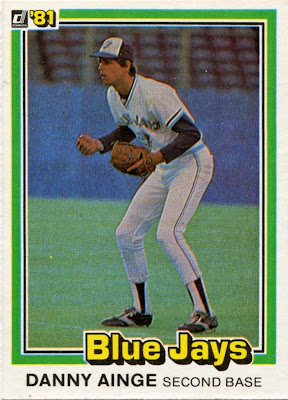 Mike also decided to knock out a Dime Box Dozen need while he was at it.

Only recently have I decided to pay attention to Danny Ainge's baseball career. He played three mediocre seasons with the Blue Jays from 1979-81 before making the permanent switch to basketball.

I've made it a mission to track down all of Ainge's cards from his baseball playing days, which isn't too tall of a task considering he only appears in two years of checklists (1981-82).

This Donruss rookie brings me one step closer to realizing my goal. 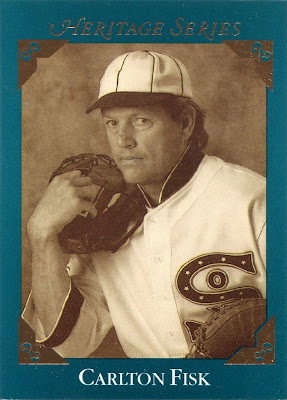 Next up is a PWE from probably my most frequent trading partner, Mark of the awesome blog "This Way to the Clubhouse...".

I've lost track of the number of cardboard gems Mark has sent me. Every batch he puts together seems to result in a handful of WOW-worthy cards, and this envelope was no exception. Carlton Fisk in Black Sox-era duds is most certainly deserving of a WOW.

I'll chase the Studio Heritage set with more vigor one day, but I'm fine with the few that trickle in here and there for now. 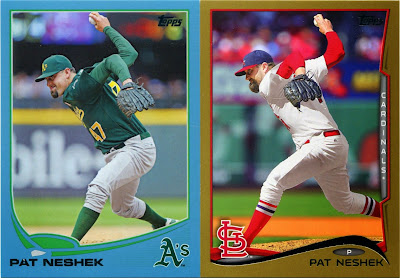 I collect hundreds of different players, but few of them put a bigger smile on my face than Pat Neshek.

The guy is a fellow collector and a prolific TTM signer. A stellar 2014 season with the Cardinals breathed new life in what seemed to be a dead baseball career, and it couldn't have happened to a better guy.

Not to mention that these two Neshek parallels from Mark look absolutely stunning next to one another. 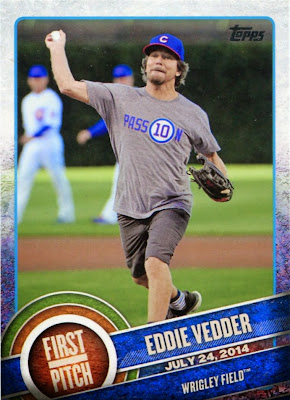 I'm a little torn on how to feel about this one.

Eddie Vedder is one of three celebrities to represent my beloved Cubbies in this year's fantastic "First Pitch" insert series. I feel obligated to add any somewhat quirky or off-key Cubs cards to my collection, so I'm happy to have it in that regard.

Then again, I've never been much of a Pearl Jam fan, so I can't say I relate to it much on a musical level. (Vedder actually sang the stretch at the Cubs game last night, coincidentally.)

All in all, I enjoy it for the sheer fact that it's a new card for my Cubs binder. 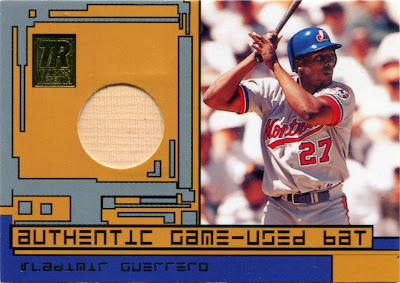 When he's not busy going to war with fellow bloggers, Wes of "Jaybarkerfan's Junk" is holding contests on his blog.

I recently won a spot in his Big Fun Draft Party. Even though the number I picked resulted in a bunch of football and basketball relic cards that I didn't need, it was still Big Fun to be a part of the madness.

And, hey, Wes even threw a coveted bat card of my man Vlad into my winnings, which shows how generous a guy he is.

But anyone who's traded with Wes probably knows that already. 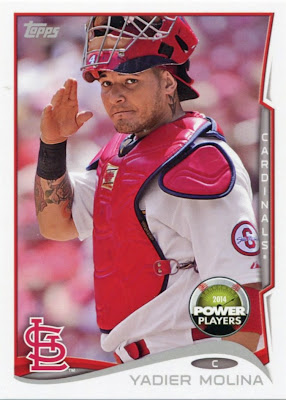 We go to the Great White North for this next PWE from my buddy Douglas of the terrific "Sportscards from the Dollar Store" blog.

I feel a little bad trading with Douglas because I don't usually have money to cover the insane shipping costs to Canada. But I am working on an envelope for him as we speak, because envelopes are awesome.

Yadi joins me in a salute to the PWE. 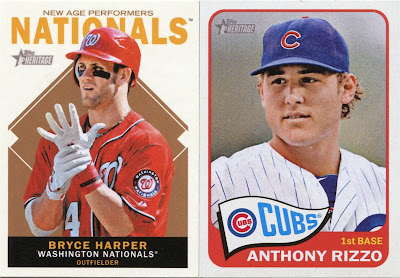 Heritage needs are always appreciated, especially short-prints like that Rizzo.

My hat goes off to anyone who has ever built or tried to build a #1-500 Heritage set, because SPs seem to get buried in some mysterious cave after a few months.

Luckily, I have people like Douglas to help excavate them. 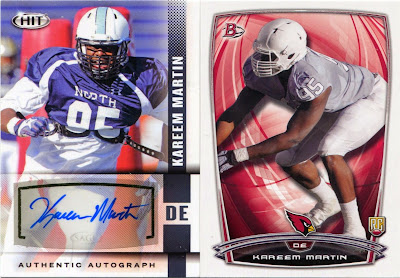 I don't collect football cards, and I can't say I've ever even heard of Cardinals defensive end Kareem Martin.

However, Douglas hipped me to the fact that Martin and I share a very special connection. 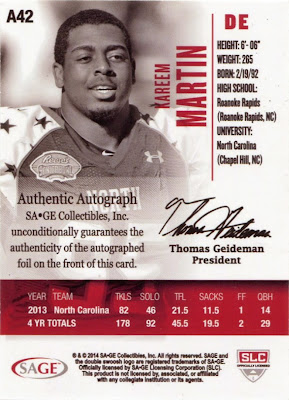 Check out that birthdate.

Otherwise known as the exact day I was born. There are a handful of February 19th birthday boys in baseball, but none that I know of share my exact date of birth. Mr. Martin is the first professional athlete I've heard of that was born on February 19th, 1992, and I'm glad Douglas was there to tell me about him.

That said, I bet I'm a few hours older than Kareem is, because I came into this world at 2:02 A.M. that morning. 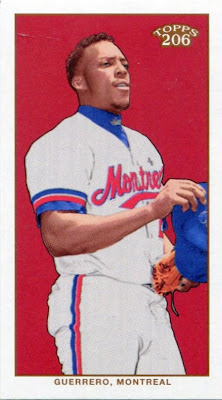 Lastly, we have a PWE from my buddy Tim of the terrifically-named blog "I Love the Smell of Cardboard in the Morning."

I'm proud to say that I was among Tim's first trade partners upon his entry into the blogosphere, and I'm glad he's kept at the blogging game. I see far too many blogs sputter and die within a couple months of their birth.

Tim kicked off the fun with this bite-sized Vlad from the first (and far better) rebirth of the T206 brand.

Tim managed to do the unthinkable by knocking out a quarter of my Dime Box Dozen list with a single PWE.

I've had a Topps Archives reprint of that Perez Record Breaker sitting in my binders for quite a while without owning the actual card. That's a strange phenomenon that bugs the heck out of me, and Tim helped ease the pain.

The "Oil Can" Boyd made the list because of those epic shades, and, if Anthony Rizzo keeps hitting the way he's been hitting, I have a feeling that the sight of him as a Padre will become a premier "Short Term Stop" once his career is all said and done. 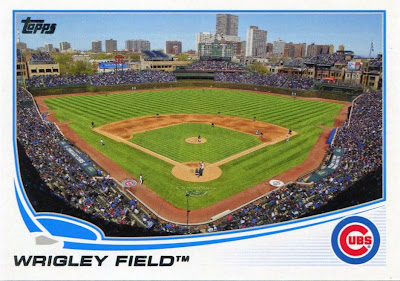 We close with an outstanding panoramic view of my favorite ballpark in baseball.

That skyline might be a bit stunted by the new jumbotrons in left and right field, but it's still a beautiful venue nevertheless.

Yes, you might encounter the bird-brained and generally irritable stereotypical "Cubs fans" (who know nothing about baseball) during your time there, but there's no better place to take in a ballgame.

Cards like these are pretty much the only redeeming part of the team sets Topps puts out these days.

When you add it all up, I've received a ton of terrific cards from quite a few fellow collectors over the past month or so.

And it's all thanks to the legend that is the PWE.
Posted by Nick at 5:45 PM

Nice haul. Topps seems to do pretty well with stadium cards in their team sets (which are perfect for GM TTMs for the record).

I wish I could send people one third of a 3x3 9 pocket binder with just one stamp but I've become too fond of my custom repacks to switch. Although the next package I have prepared for you, Nick, won't fit in your ordinary bubble mailer either...

So someone who was born in 1992 is getting a card of Farrah Fawcett????

I was 13 when Charlie's Angels was on the air, for crying out loud!

Not a fan of Pearl Jam? Well, I guess since the band has been around longer than you....

And I'm with Night Owl -- not quite as old as he is, but I was certainly alive, kicking, and watching Charlie's Angels when Farrah had her fastball back then.

I had that poater of Farrah with the red bathing suit hanging in my bedroom. It was must watch tv. Oh nice cards too

Awesome cards. Look into global stamps next time you're at the post office, PWEs to Canada for just over a buck!

I knew you'd like the Martins. As a plus, his penmanship is definitely on the upper spectrum of the football grade curve.

That Fisk is beautiful!

BTW, glad you enjoyed what I sent your way. More to come very soon.

What a mix of cards! I'm a little too young for Charlies Angels as well. It was on syndication but I never watched it. Probably got in the way of me watching MacGyver!