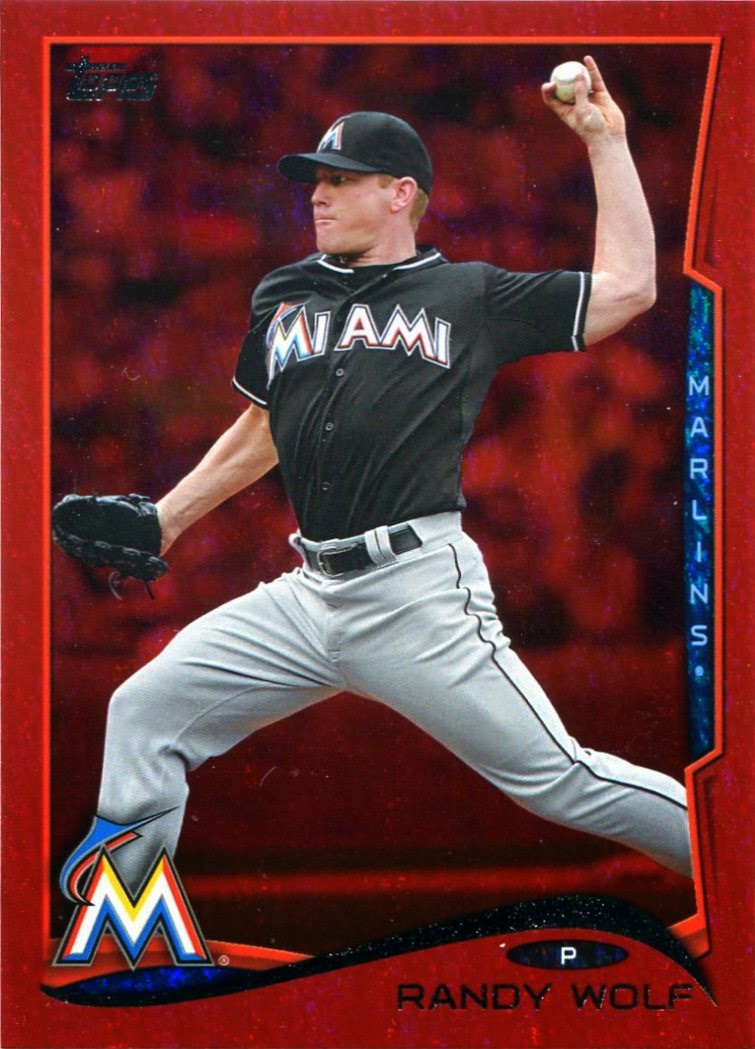 Today, as you might know, is National Pi Day.

It's the one time of year where everyone seems to celebrate math, so there's that. The other 364 days are usually spent huddled in a corner, hoping to never encounter a calculus problem ever again. (Math textbooks make me weep, which is part of why I'm an English major.)

One thing I enjoy about baseball cards is the fact that there is almost no math needed. Sure, I've become very good at knowing my multiples of 9, thanks to counting my nine-pocket pages. But knowing the first 83 digits of pi will get you nowhere as a collector.

Collecting isn't as concise and tidy as math. Take this Randy Wolf, for instance, which I claimed from the generous Matt of the fantastic blog "Bob Walk the Plank." It's one of my favorite cards from last year's Update, although I'm not sure exactly why.

It's the first time in at least ten years that anyone has voluntarily asked for a Randy Wolf card. 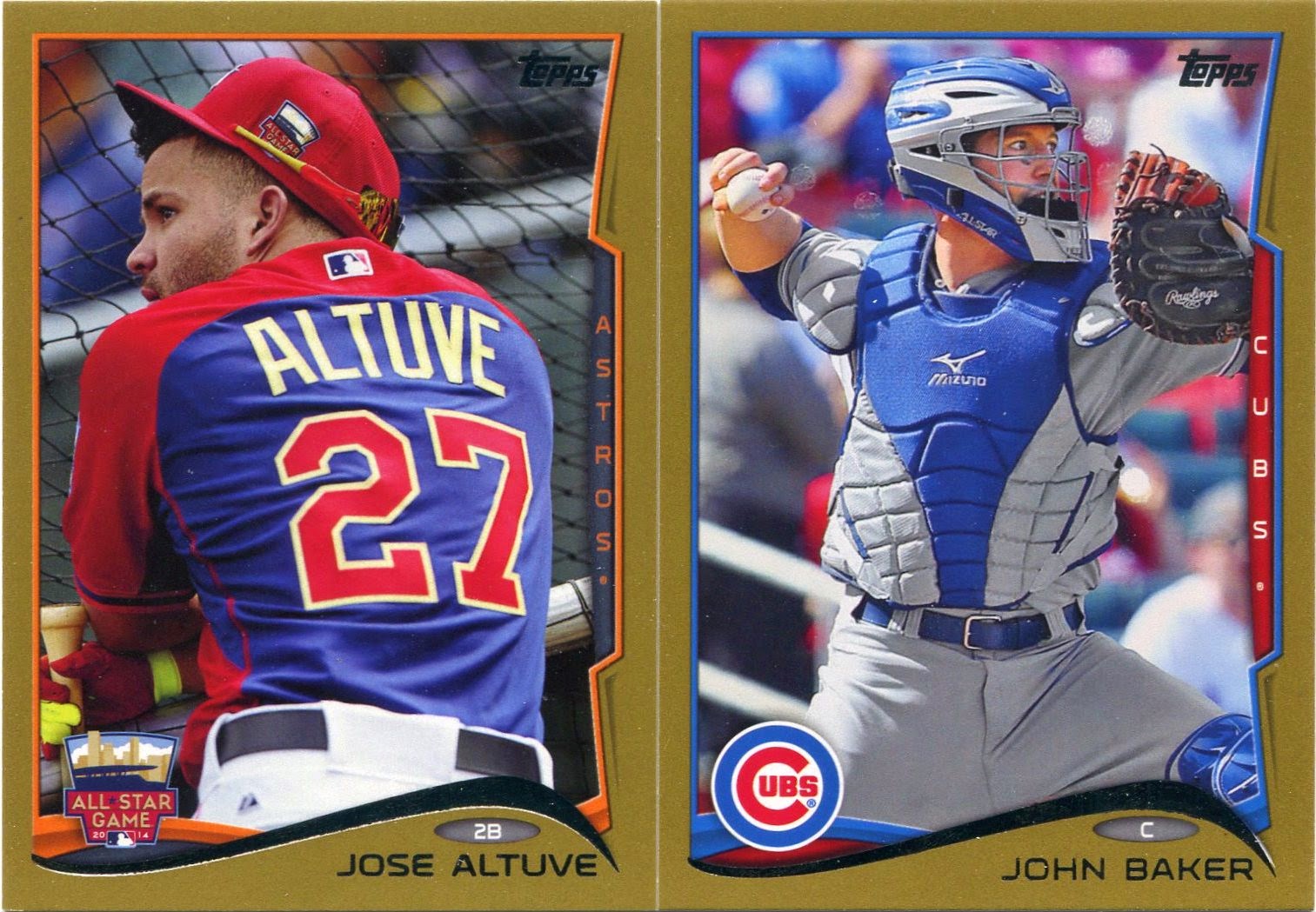 I also claimed this pair of Update golds from Matt, since they add to a couple of my newest player collections. 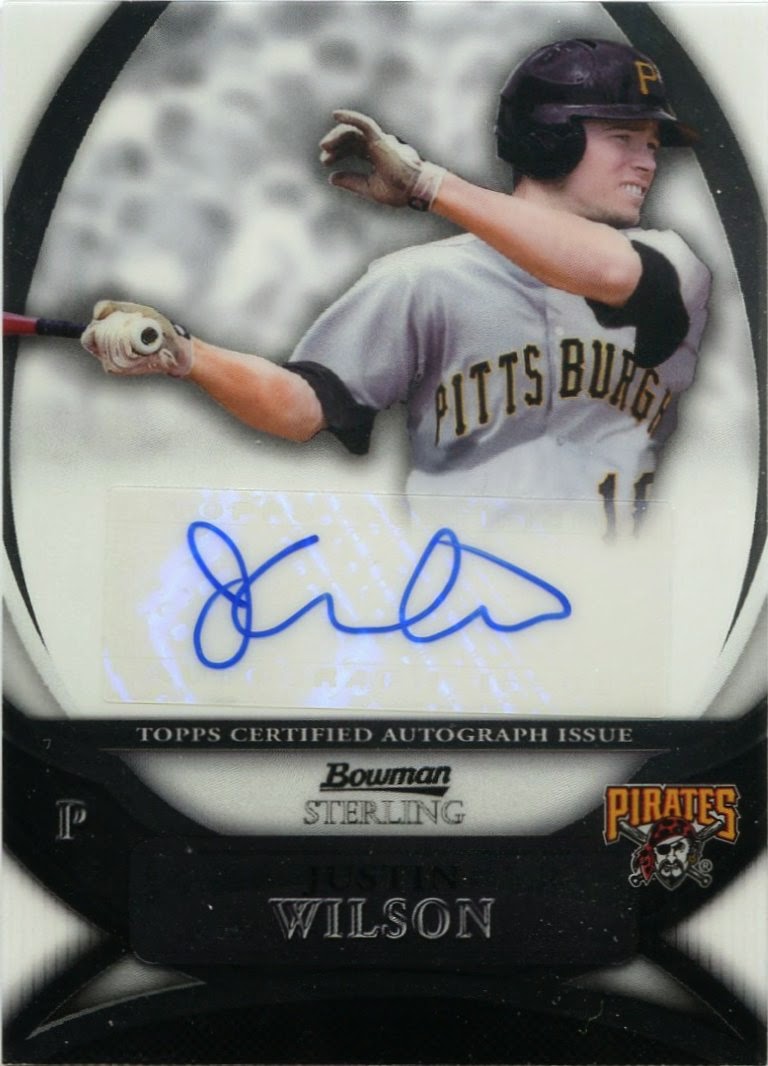 This card, as you might be able to tell, is an autographed pitcher at the plate. It's only the second one I own (after this one), which means that they occupy exactly 0.000843 percent of my collection.

But that's only a rough estimate.

My math is not to be trusted. 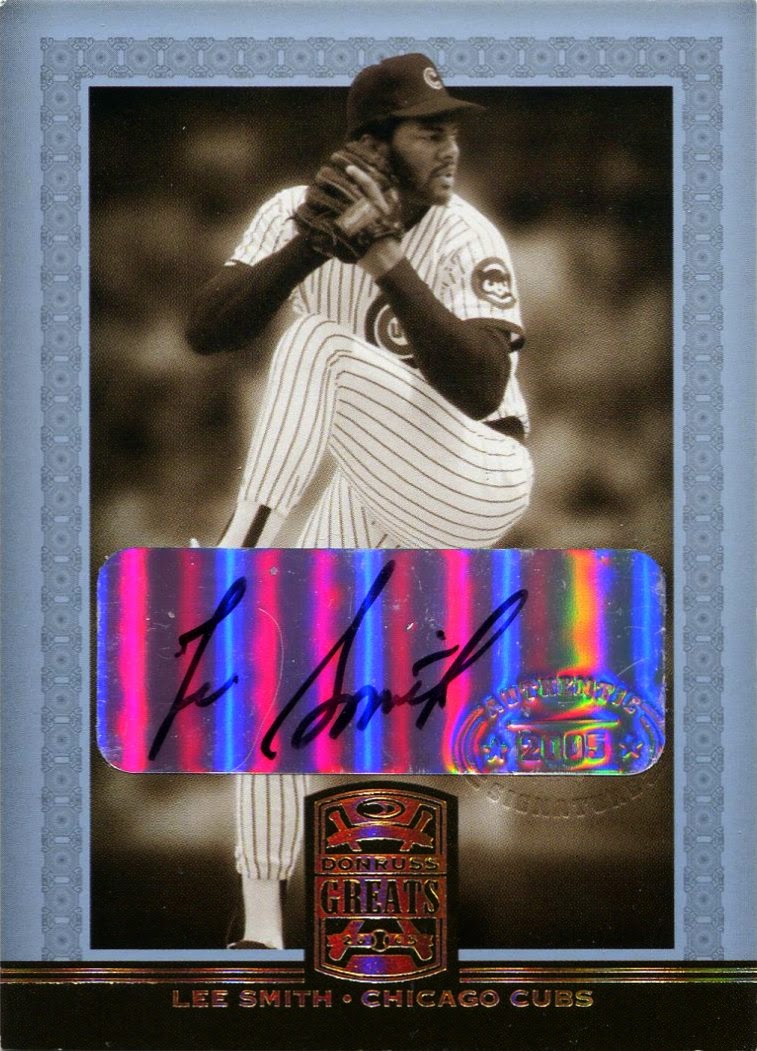 I seriously don't know where Matt gets his inventory.

The amount of quality packages I see him drop on people is staggering. If you've ever traded with Matt before, you know what I'm talking about. Apparently, he has Lee Smith autographs just lying around, looking for a good home.

Even though I am the self-proclaimed dime box guy, I'll certainly give Lee a roof over his head.

Because even I'm powerless to resist an autograph of a Cubs legend. 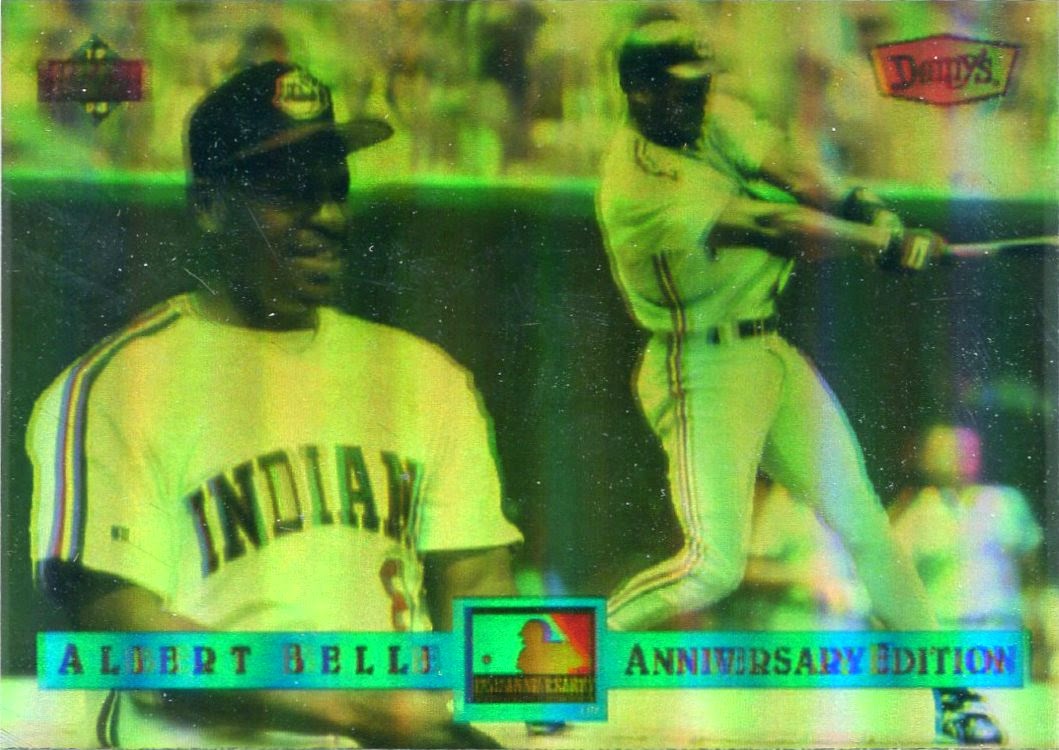 A package from Mark Hoyle, the King of Readers, arrived on the same day as that batch from Matt.

It'd been a while since Mark and I traded, so it was nice to get back in on the action. It's never a dull moment with Mark.

Between this card and yesterday's post, I'm actually starting to get a little taste for Denny's.

Did I really just say that? 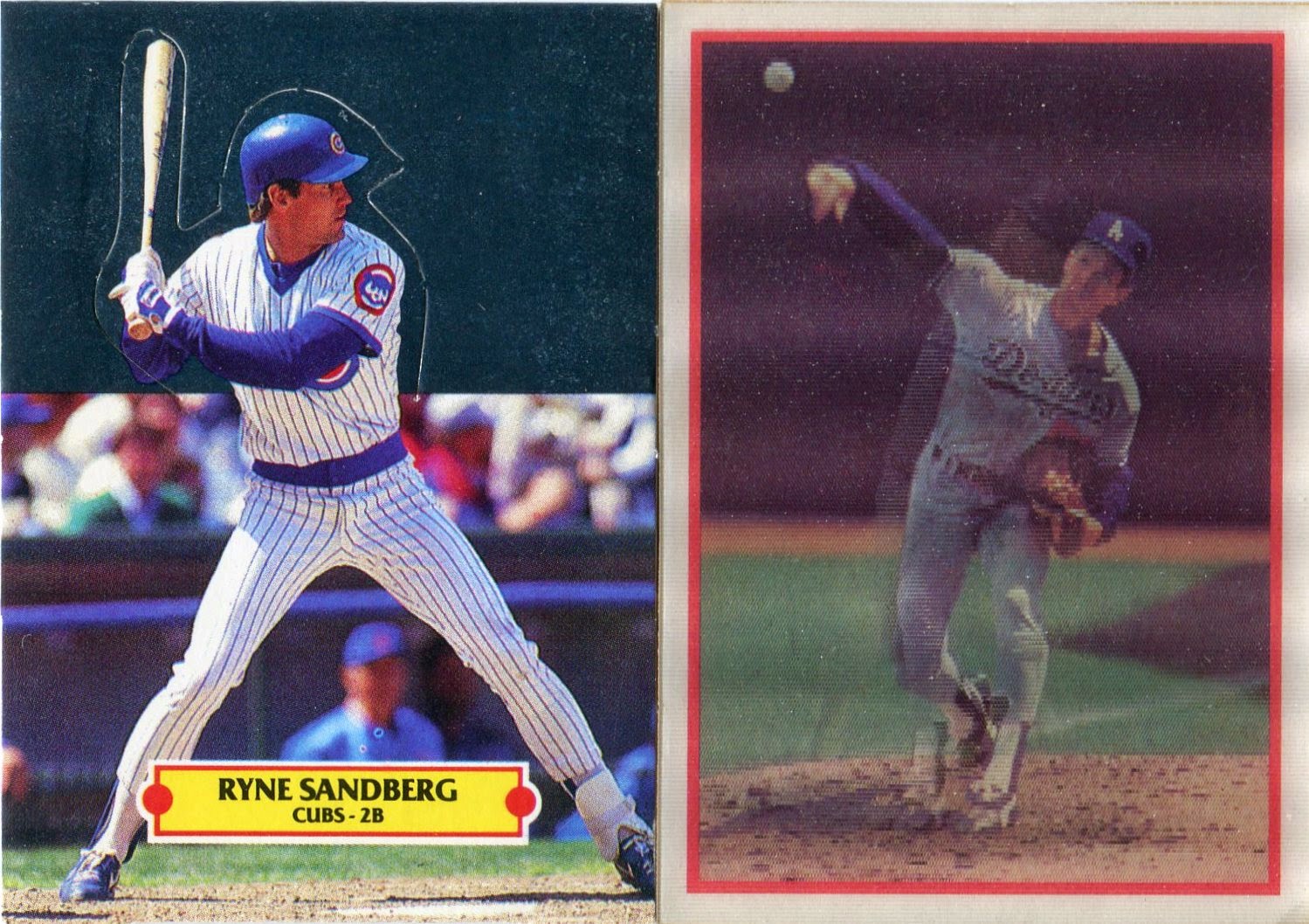 Oddballs were the name of the game with this package.

There's Ryno next to a neat 3-D Sportflics issue of everyone's favorite Bulldog. 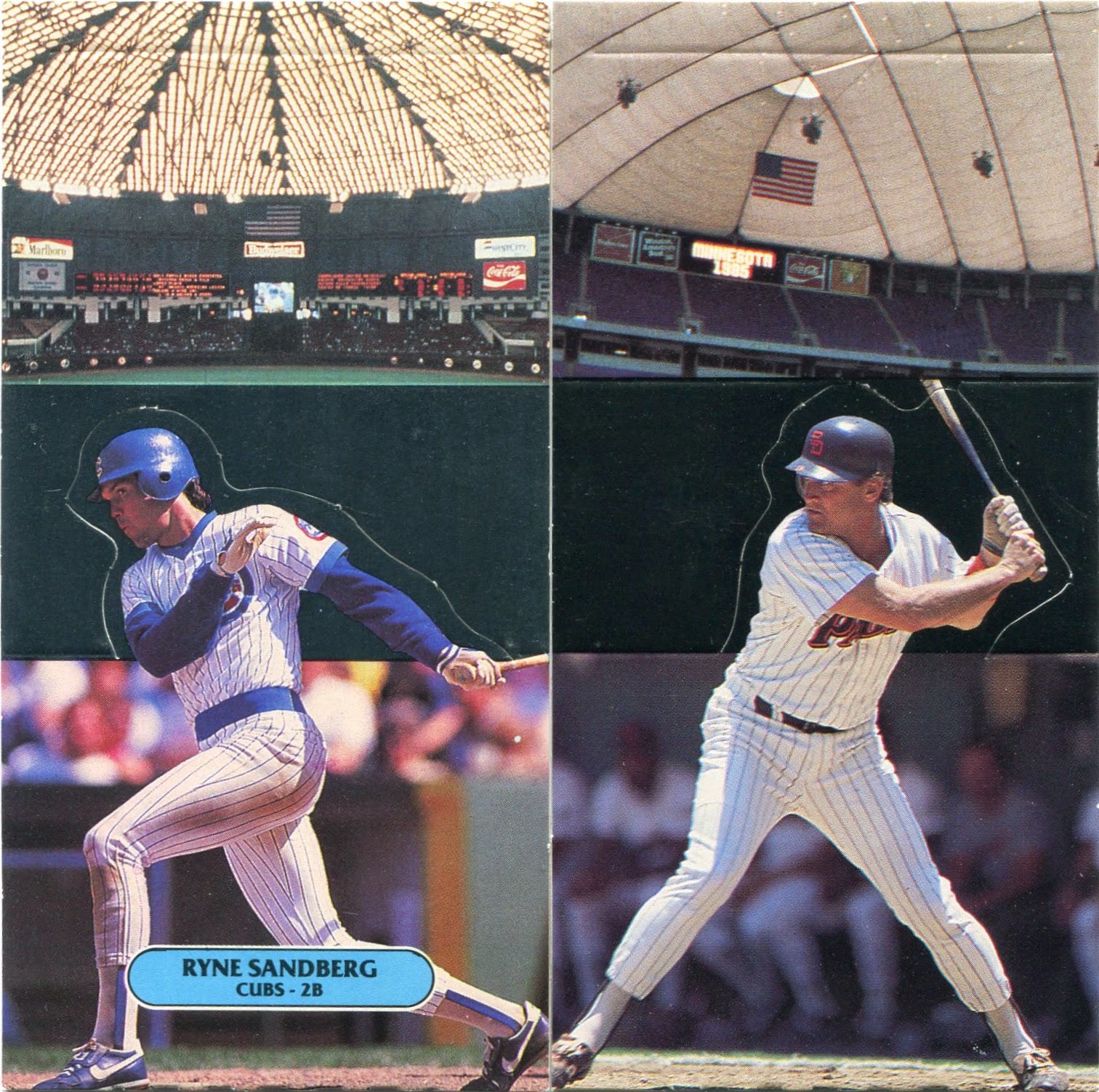 Chalk another one up for Ryno, seen here with former Padre rival Graig Nettles.

These Donruss oddballs are supposed to fold out, but I can't bring myself to break them from their original state.

Maybe if I get a double one day. 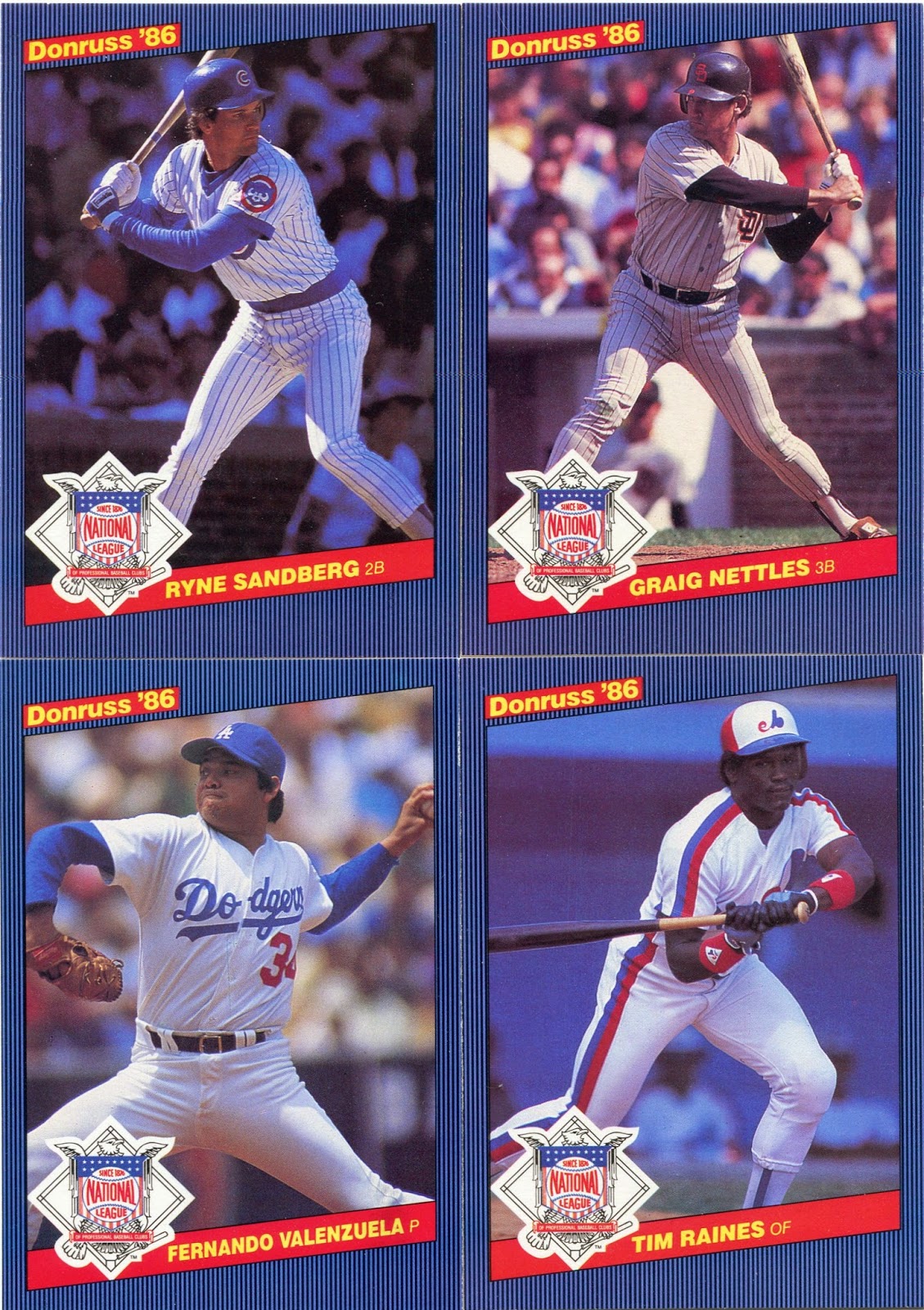 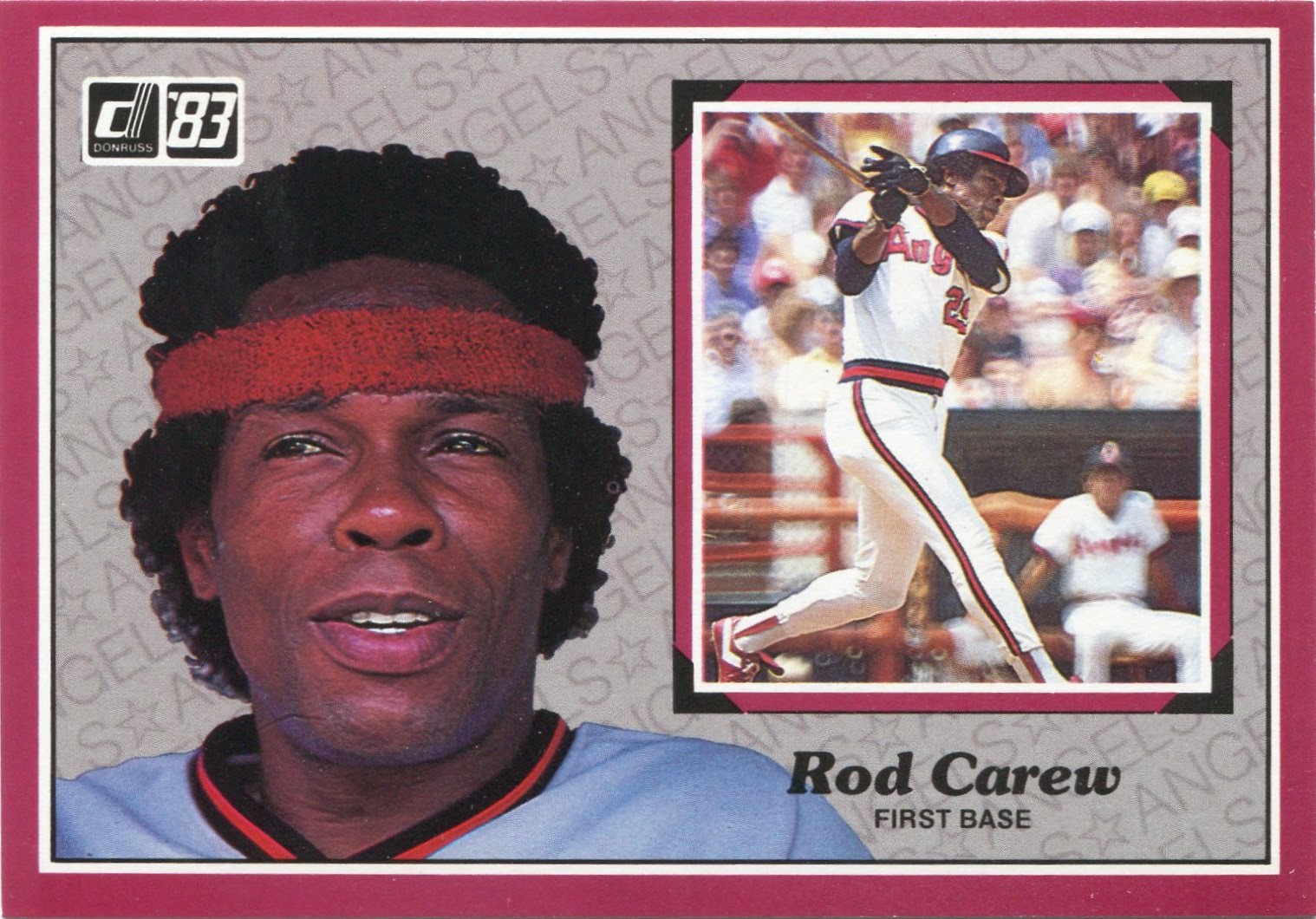 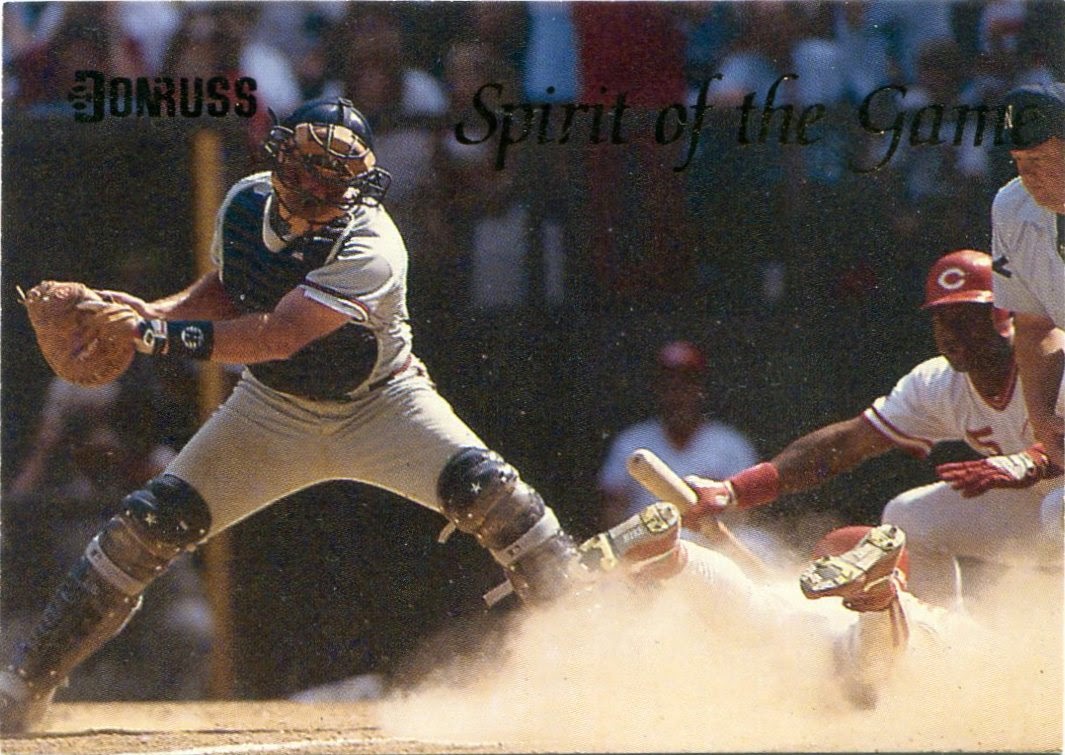 Last up is a package I received from one of my favorite trading partners, William of the fantastic blog "Foul Bunt."

William and I have been swapping cardboard for a long time, and always knows the kind of cards I like. I think that's evidenced by this awesome Donruss "Spirit of the Game" insert. (I don't know what it was with all the Donruss stuff.)

As great as the front is... 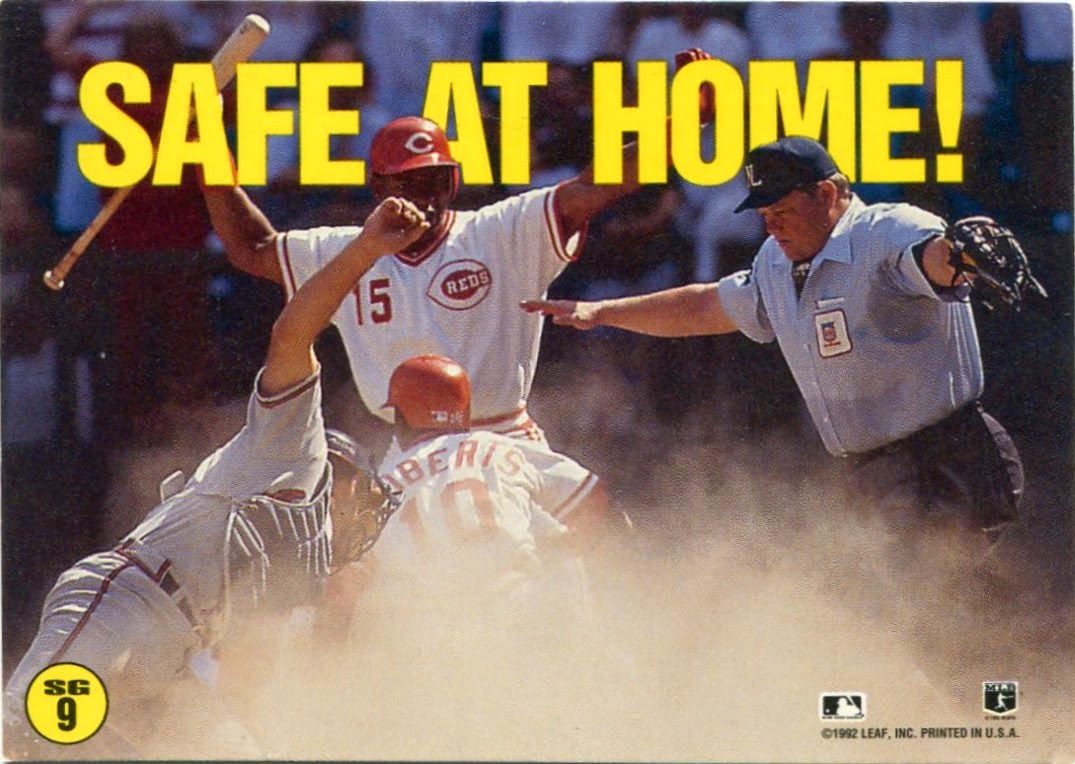 ...I think the back is even better.

Not only do we see an emphatic safe call by (who I believe is) Joe West, but we also discover that the sliding baserunner is none other than Bip himself.

Don't sleep on the Wild West-esque cloud of dust, either. 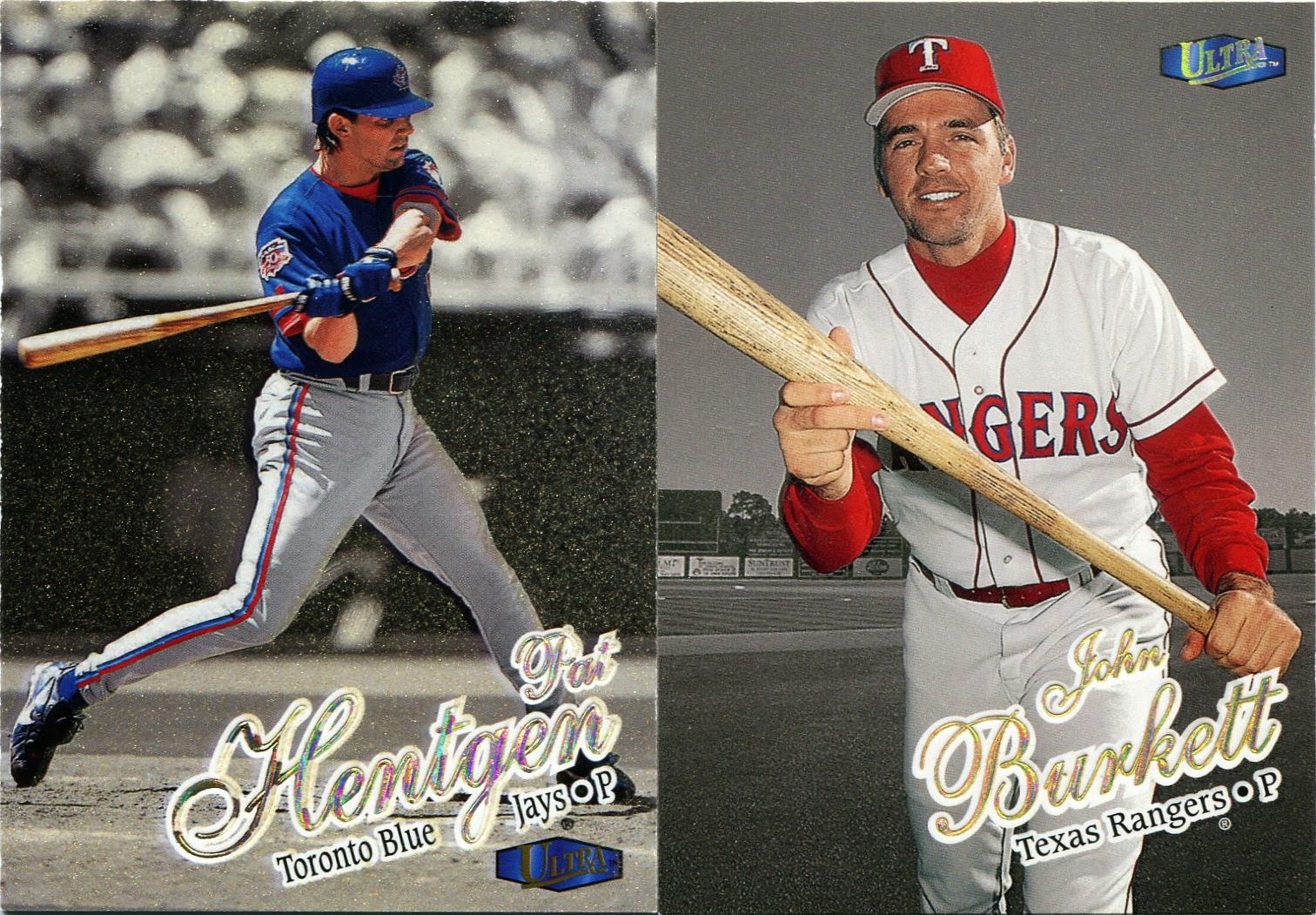 William also threw in a couple Ultra Gold Medallion pitchers at the plate.

These two happen to be of the rare American League variety. 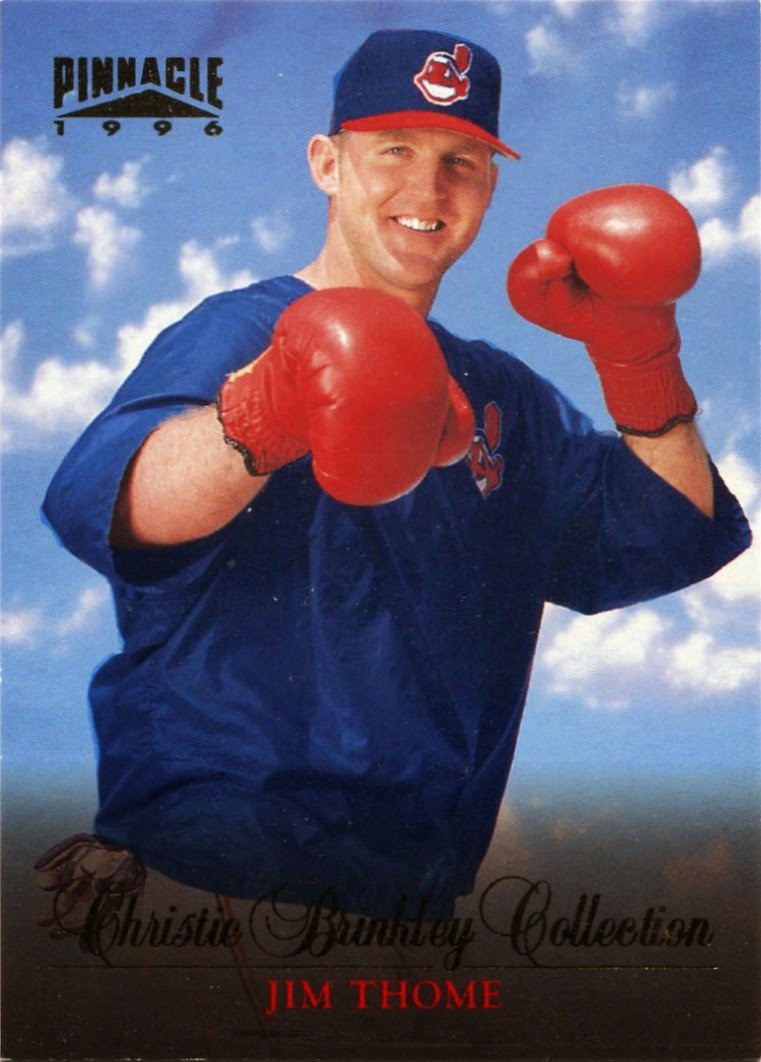 The crown jewel of this batch was definitely Mr. Thome here.

I've heard a lot about the "Christie Brinkley Collection" insert set from 1996 Pinnacle, but I hadn't been able to get my hands on a single one until William came along. Thome putting up the dukes is, hopefully, my first of many finds from this series. (I'm open to receiving any you may have lying around.) 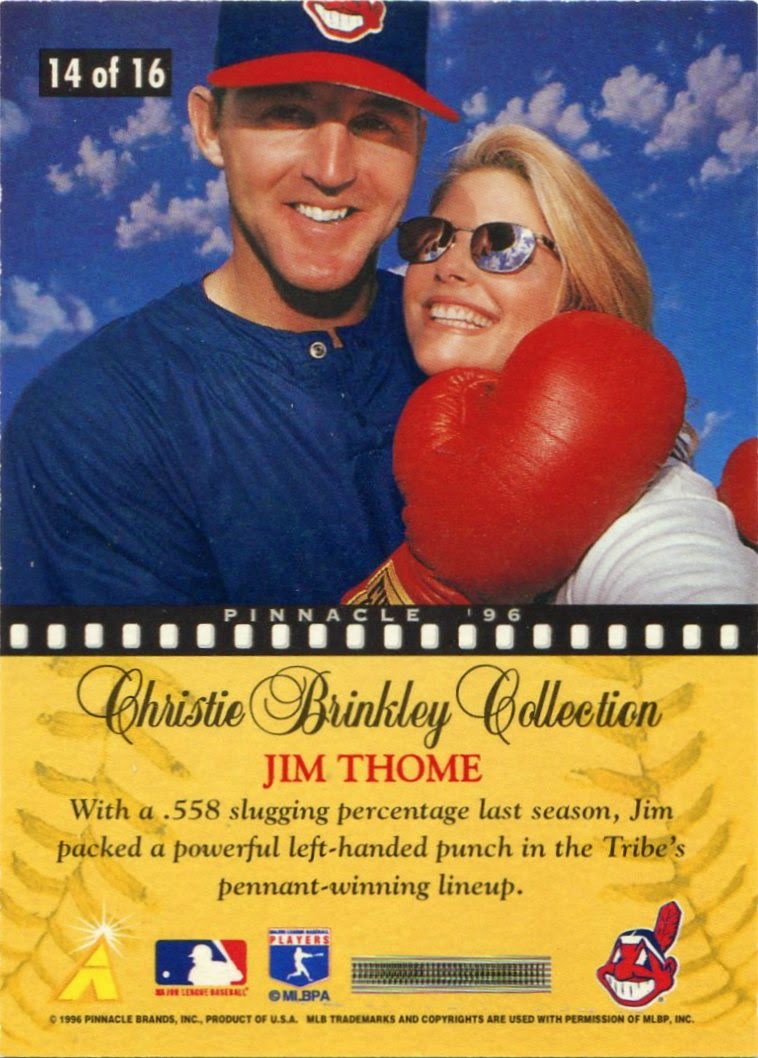 Selfies took a lot more effort in the days before smartphones. That's Brinkley herself (a supermodel, mind you) posing with Jim Thome.

Seeing as how I have one of the 16 cards in this insert set, I now own 6.25 percent of the entire checklist.

That's all the math you're getting from me on this Pi Day.
Posted by Nick at 5:48 PM

I'm surprised to see how well preserved Christie Brinkley is even though she's over 60 years old.

Really, not a math fan, huh?
That's okay, I still suggest you have a piece of pie to celebrate. Who can resist pie?

THIS kind of PI day only happens once a century... I love that Smith!

Not a math guy myself, I could just see someone starting a collection where the card number coincide with the digits of Pi. That actually sounds like a fun side project, that I hope somebody does sometime.

A great group of people with whom to trade! I think Mark Hoyle and I share a love for the oddballs. I have a bunch of those Donruss stand-ups!

The odd balls fit in nicely with yesterday's post.

Glad you enjoyed the cards.