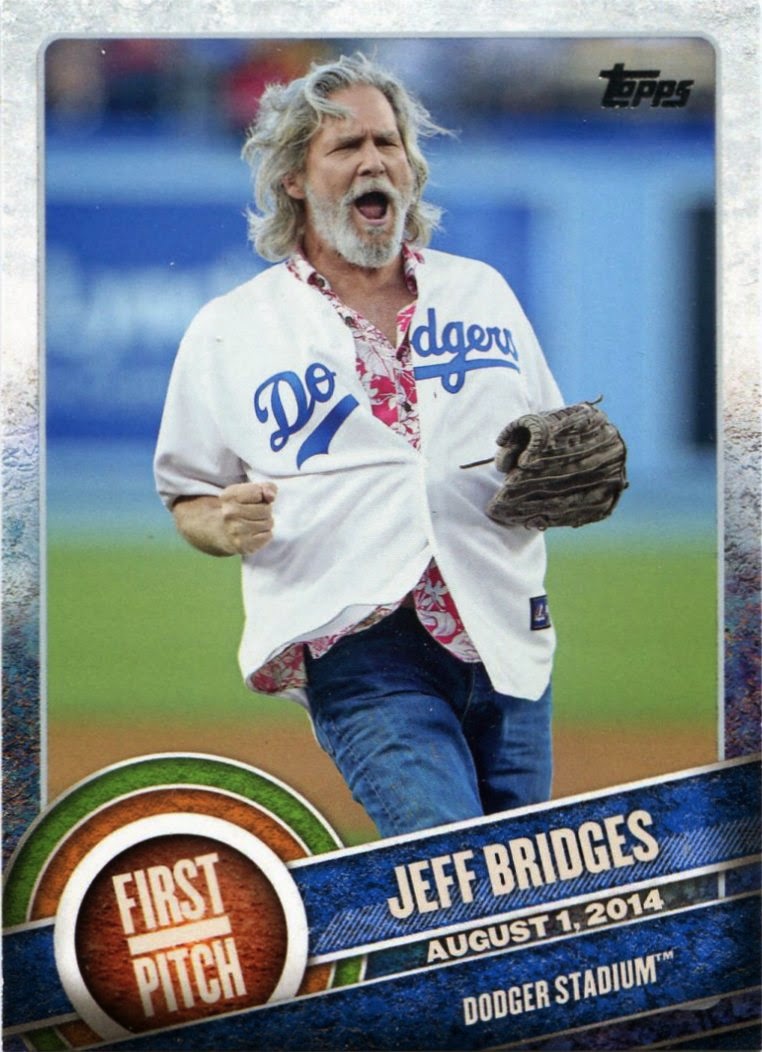 As fate would have it, a huge Just Commons order wound up on my doorstep the day before I attended my big birthday show.

So, as if organizing, sorting, and filing through 800-plus nickel, dime, etc. finds wasn't enough, I had another 240 cards from my latest Just Commons order on my plate as well.

It's easily the biggest purchase I've ever made on the site, although the majority of it was paid for by a twenty-dollar gift certificate I received from my mom at Christmas. I surprised myself by being able to hold onto it for nearly two whole months before spending it.

Much of this order was centered around picking up the remaining 2015 Topps singles I needed. I love busting packs as much as the next guy, but Just Commons really is the way to go for, well...commons. I snagged the remaining 80 or so singles from my want list for around ten bucks all together. That would've bought exactly two 36-card rack packs from Target.

The only 2015 Topps insert I purchased was the above Jeff Bridges "First Pitch" issue. Now, I know Bridges has been in many other fantastic films...but let's face it. He is, and forever will be, The Dude.

This card really tied my order together. 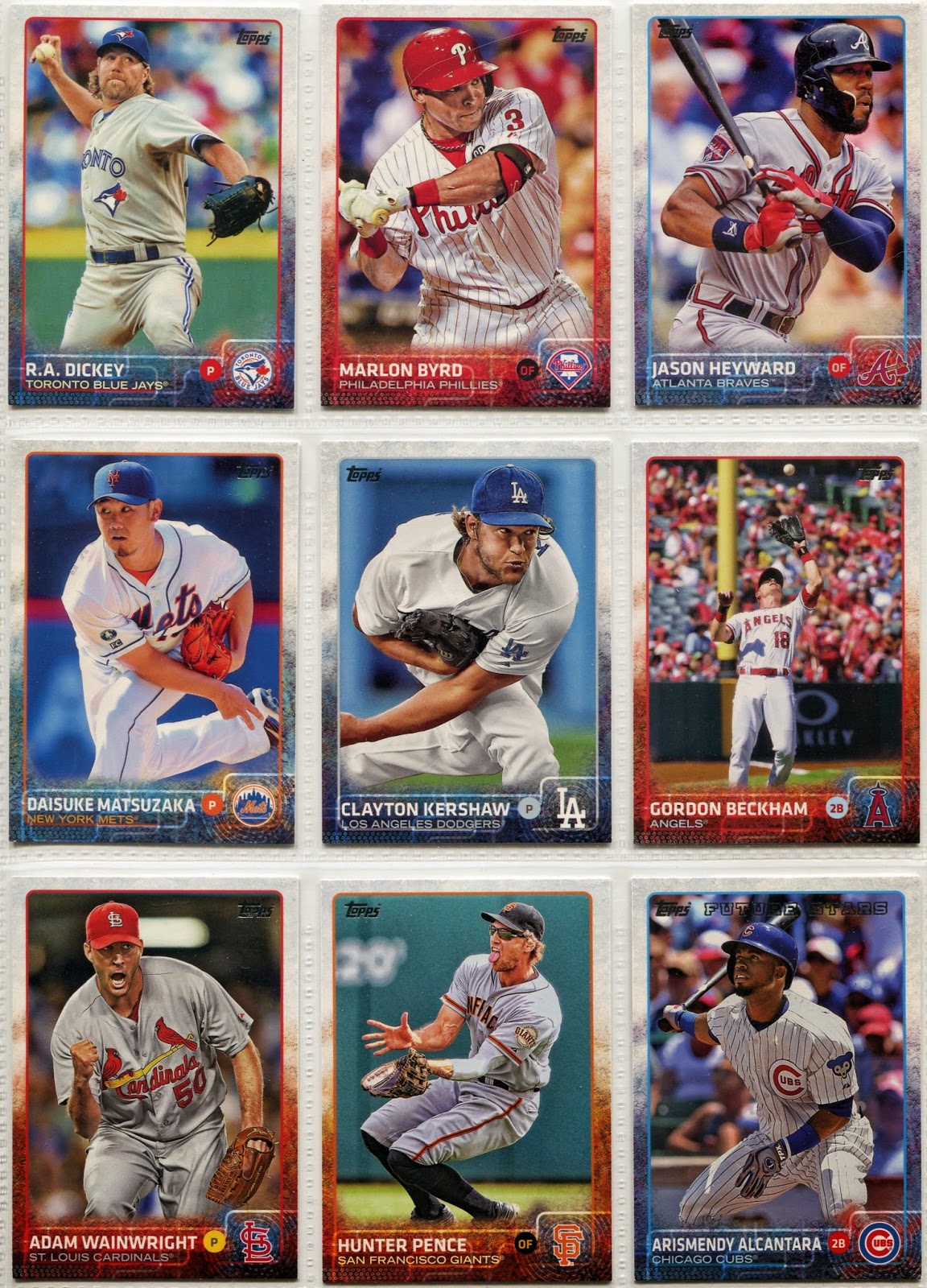 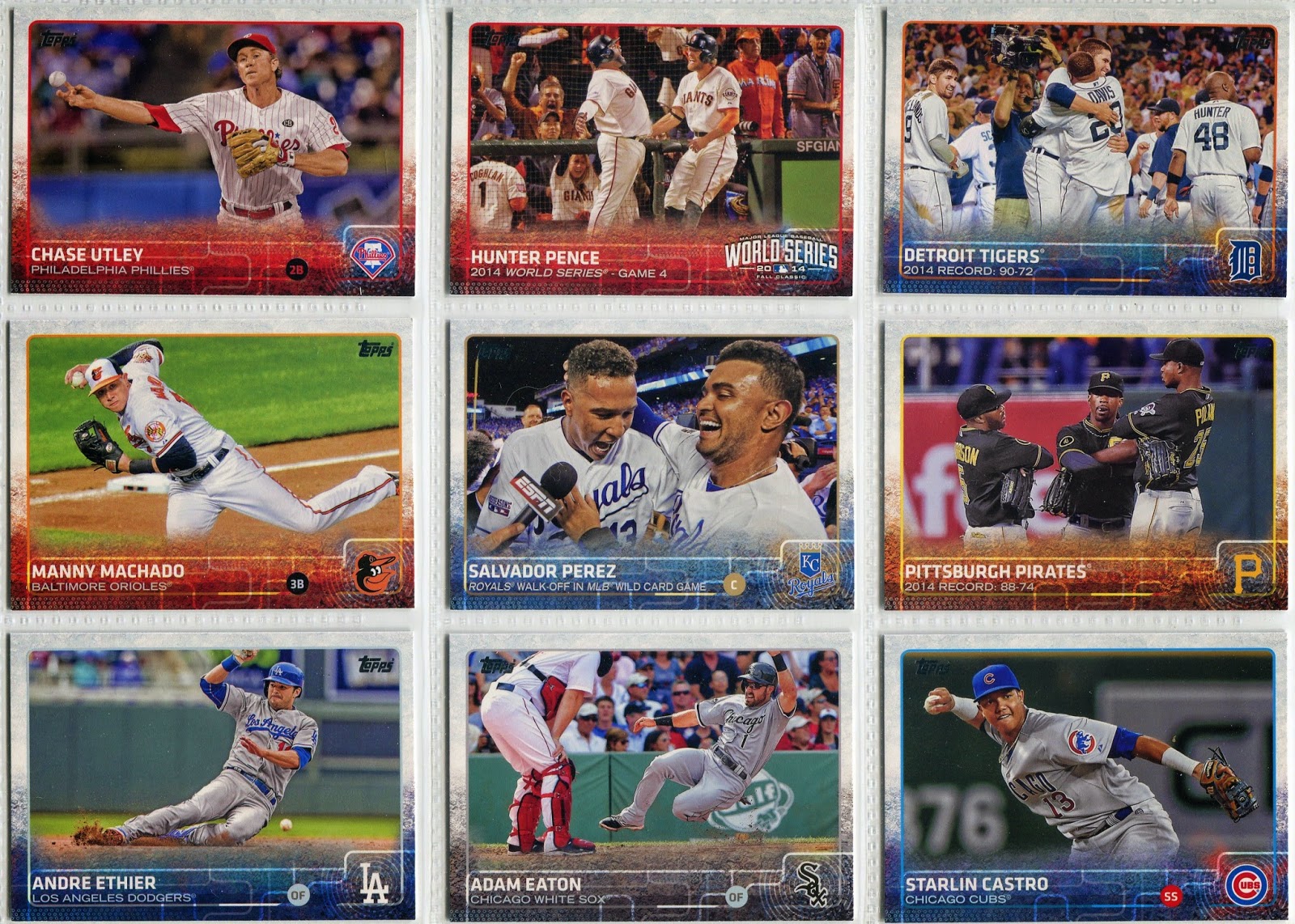 While it was kind of overlooked by the daring design, 2015 Topps really did feature a lot of fine photography.

Whether horizontal or vertical, there's a lot to love here. 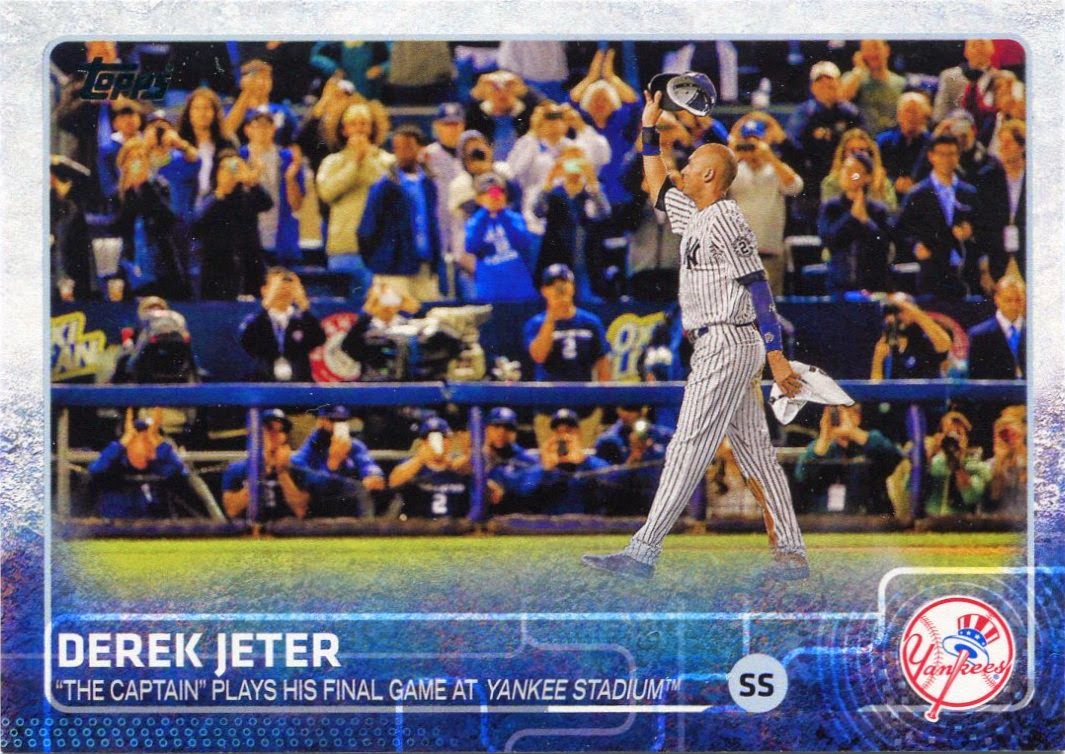 This was the most expensive base card of the bunch, setting me back a whopping 50 cents.

It hasn't gotten as much pub as Jeter's landmark card #1 in the checklist, but this is a beautiful sub-sunset issue (if I may use such a term) of Jeets. It won't go down as his official final tribute since it's technically a checklist card, but it's historic nonetheless.

As if that wasn't enough, it's a terrific addition to my "tip of the cap" mini-collection. 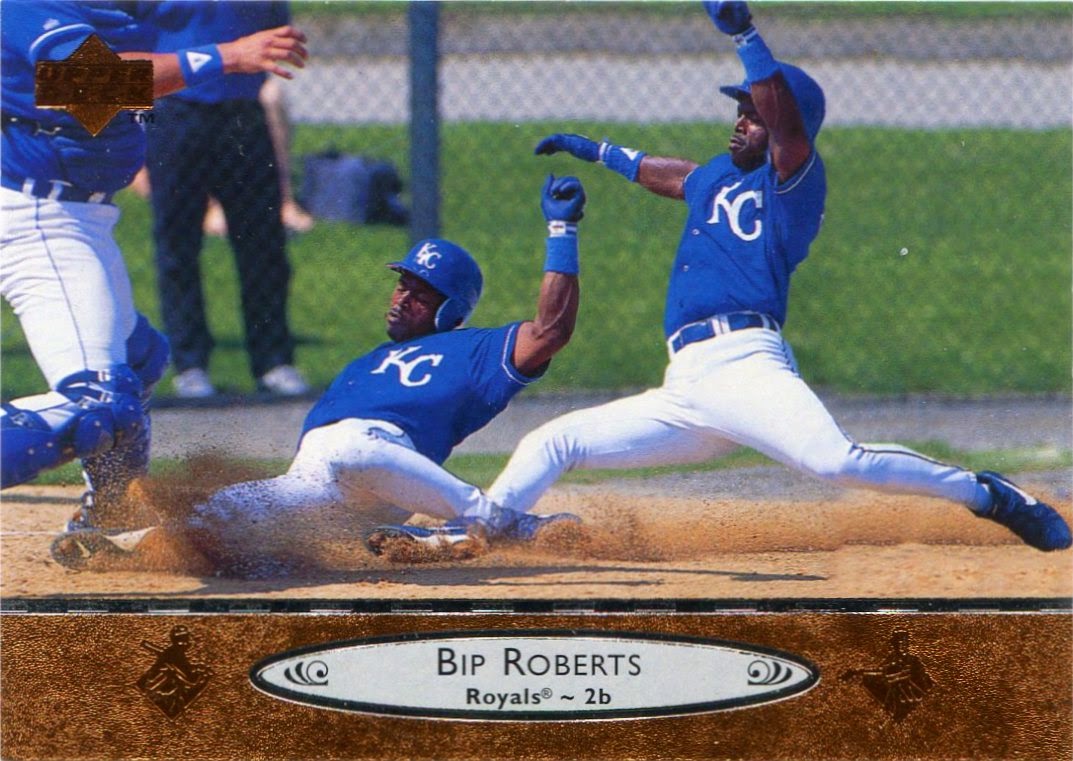 ...I can't let a Just Commons order go by without doing some serious mini-collection damage.

I seem to say this time and time again, but Just Commons has the greatest selection of mid-to-late '90s cards you'll find. Given the jarring amount of mini-collection hits that era seemed to produce, that suits me just fine.

You get two Bips for the price of one on this awesome multiple-exposure shot from 1996 Upper Deck. 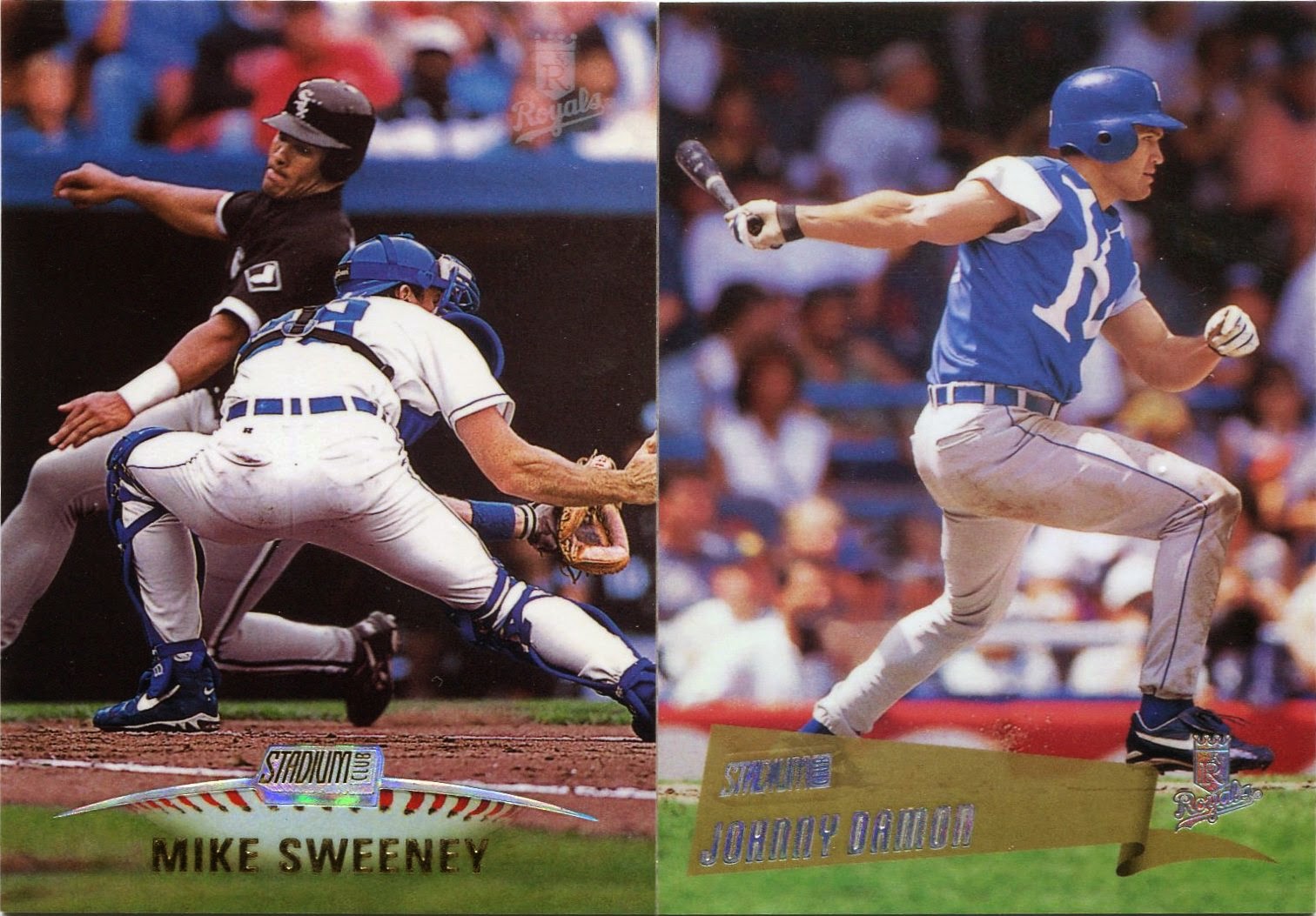 Disclaimer: Dime Boxes apologizes for reminding you (once again) of MLB's egregious "Turn Ahead the Clock" promotion.

We now return you to your regularly scheduled programming. 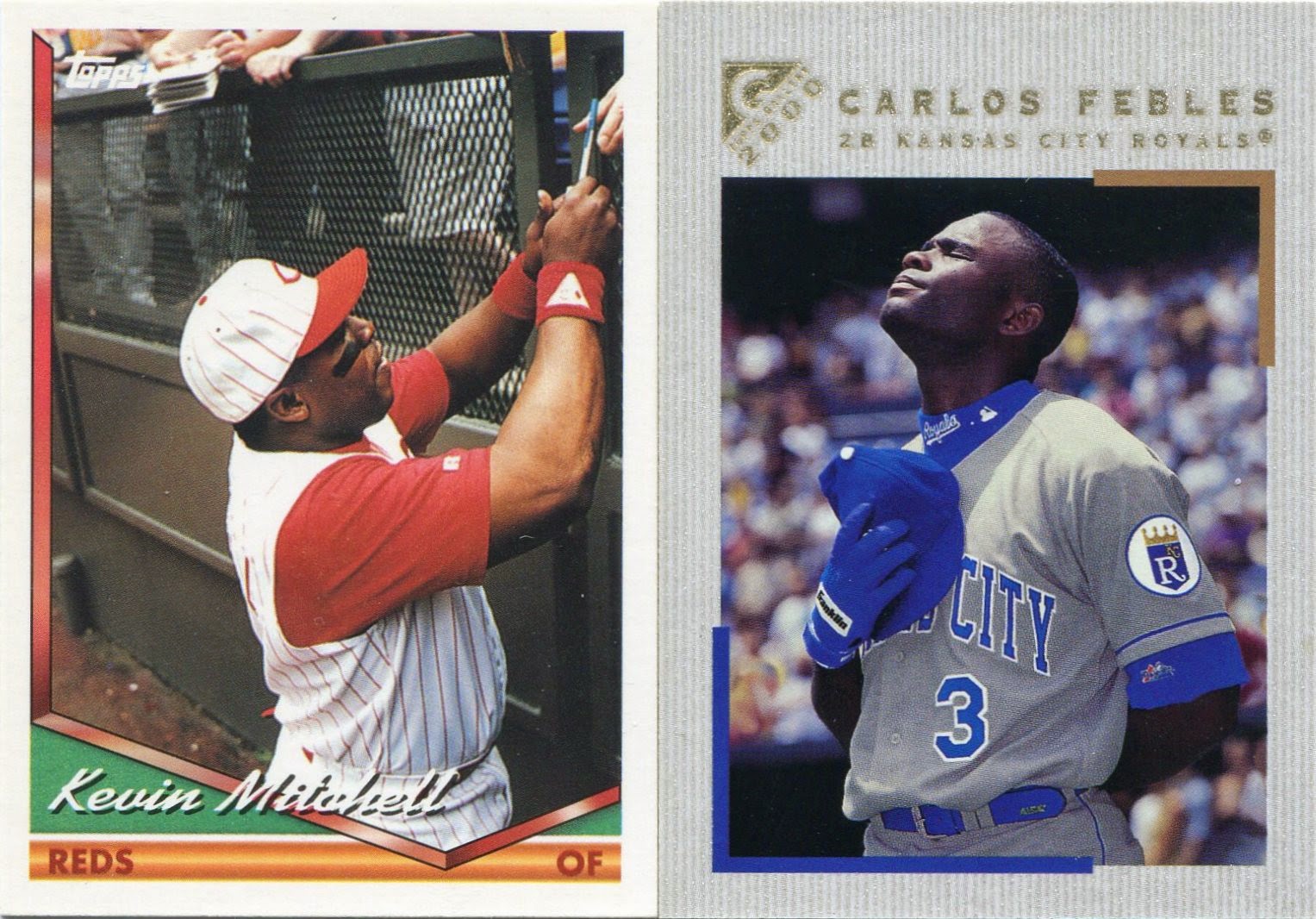 A couple for the "autograph" and "anthemic" archives.

Carlos Febles is right up there on the Most Obscure Guys I Collect list. 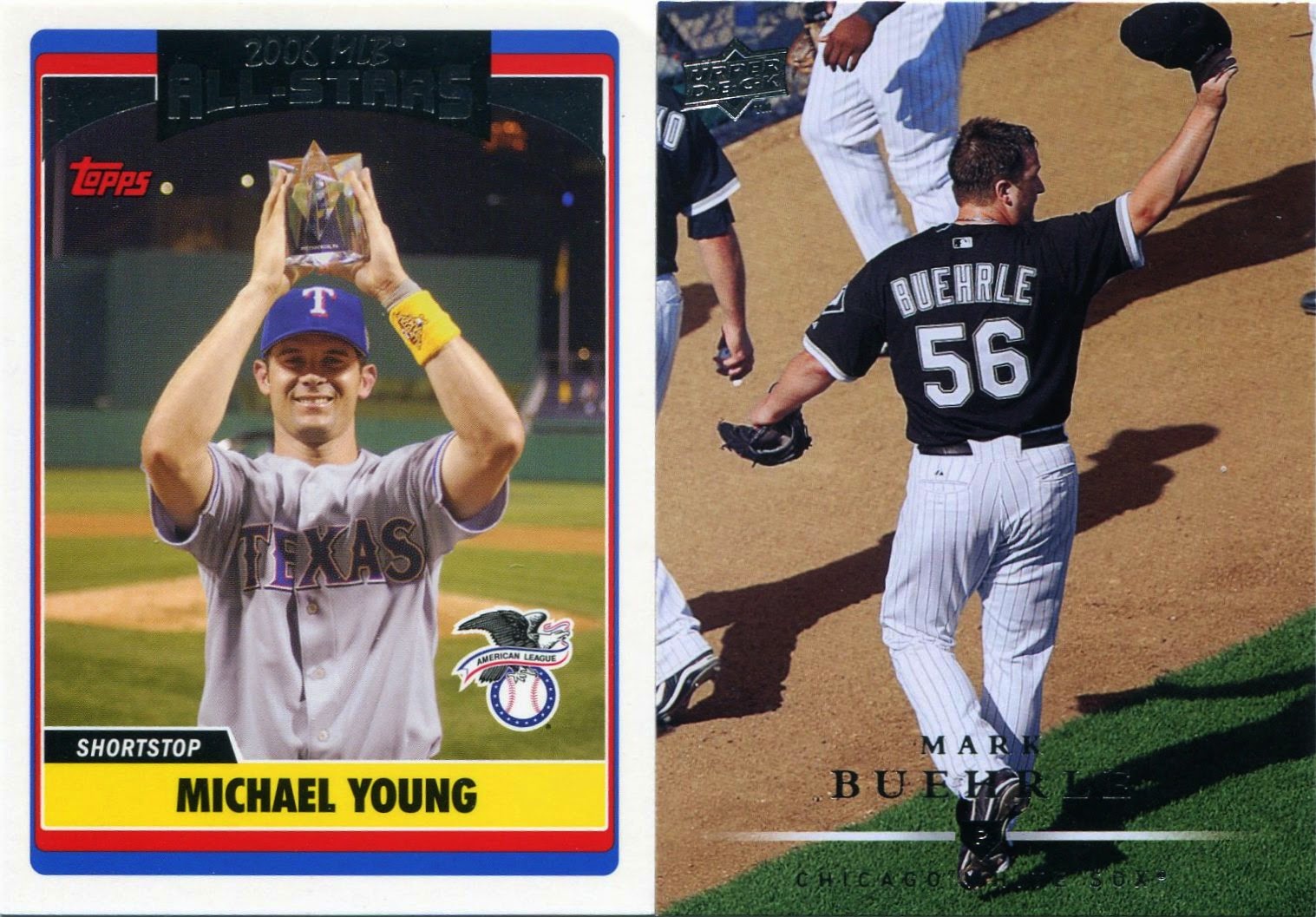 While I bought a ton of 2006 Topps and 2008 Upper Deck, I still managed to ignore a lot of fantastic cardboard since I wasn't yet chasing "award show" or "tip of the cap" cards at the time. Part of my duty here in 2015 is to track down all those lost treasures.

Just Commons helps me accomplish that. 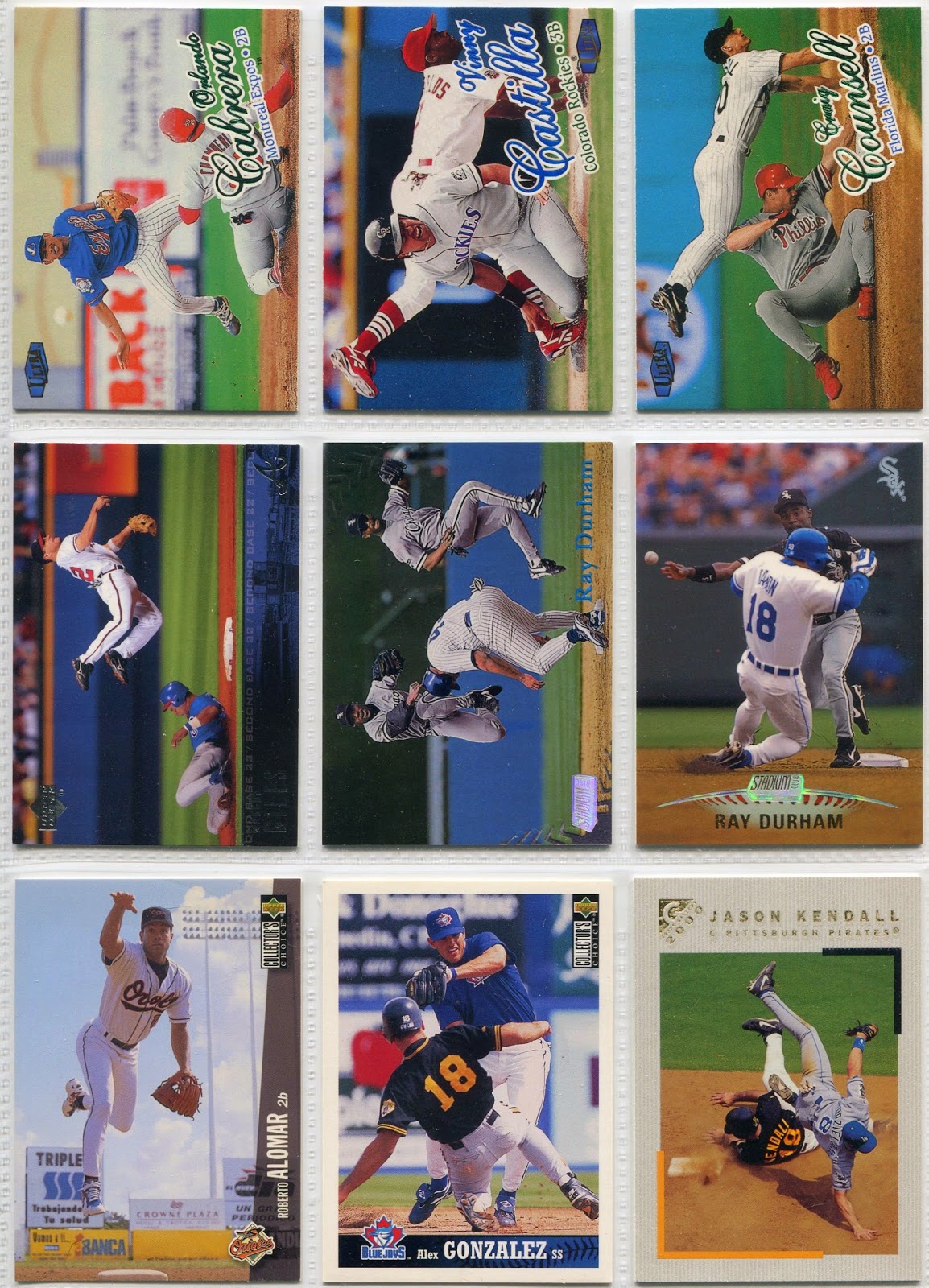 I loaded up on double dips with this order.

My favorite of this bunch has to be the '98 Stadium Club Durham centerpiece.

It's the rare shot in which both middle infielders are suspended in midair. 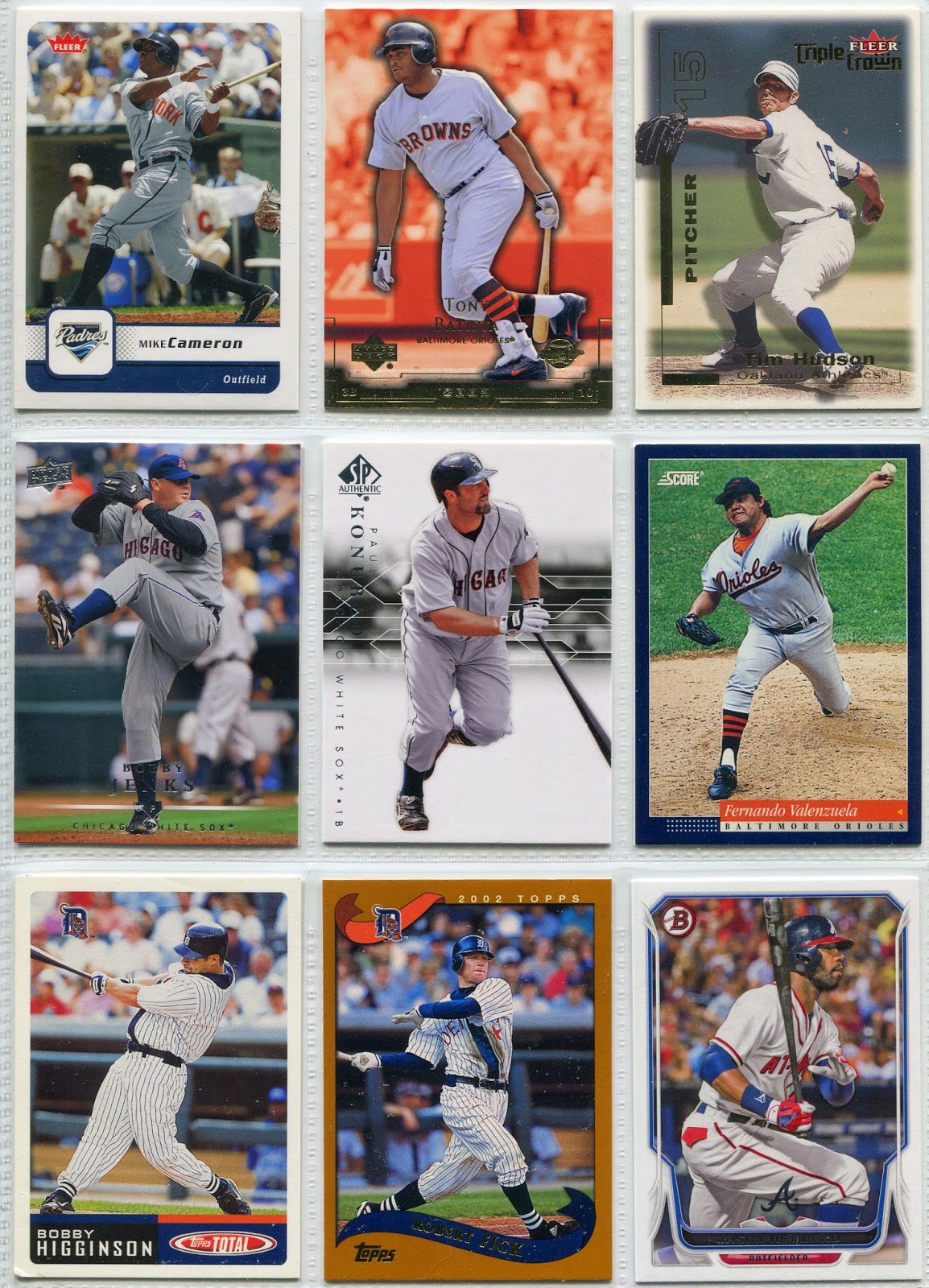 I didn't slouch with the throwbacks, either.

One of the things I love most about collecting these retro jerseys is the number of different eras they represent. You've got turn-of-the century throwbacks (A's), Negro League throwbacks (Tigers, Braves, Mets), throwbacks to defunct teams (Browns/Orioles), and many, many others.

There's never a dull moment when you turn back the clock. 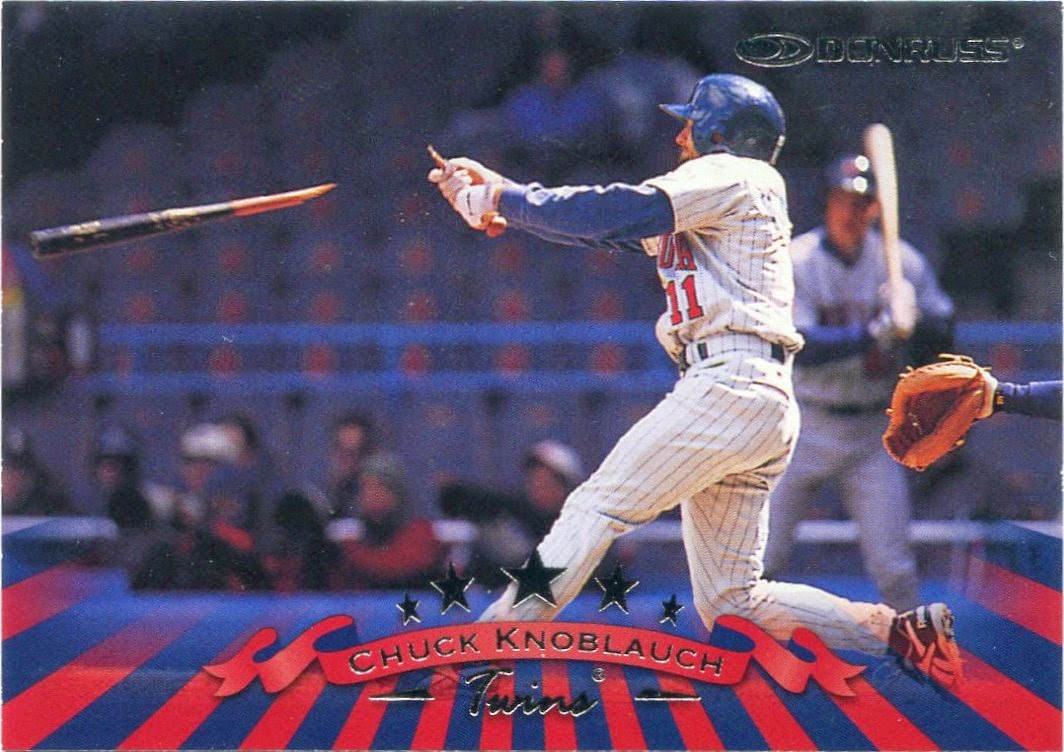 This might've been my favorite of all the mini-collection gets from this Just Commons order.

Broken bat cards are relatively hard to find. They're not nearly as prevalent as, say, double dips or throwbacks. But, in the rare case that I do find a new one, they never fail to make my jaw drop.

In a rare gem from late '90s Donruss, we get a fantastic shot of the aftermath of a broken bat. If you look closely, you can even see the little chips hovering in midair from the bat's explosion. 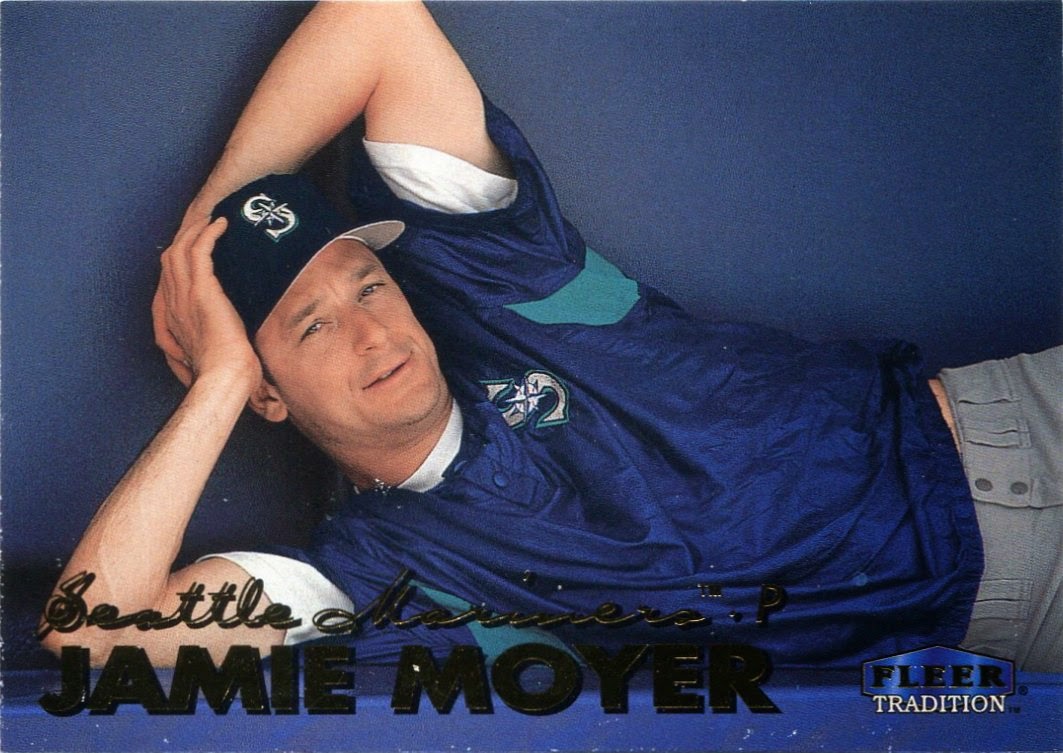 This card has a very Titanic-ish "draw me like one of your French girls" feel to it.

It's so awesomely bad that I absolutely had to buy it. If nothing else, Mr. Moyer triggered yet another new discovery in the wide world of baseball cards.

After stumbling upon this image, I was curious to see what else 1999 Fleer Tradition had to offer. I'd found cards from the set here and there over my collecting lifetime, but not really enough to form a steadfast opinion on it.

What I found, however, was nothing short of legendary. 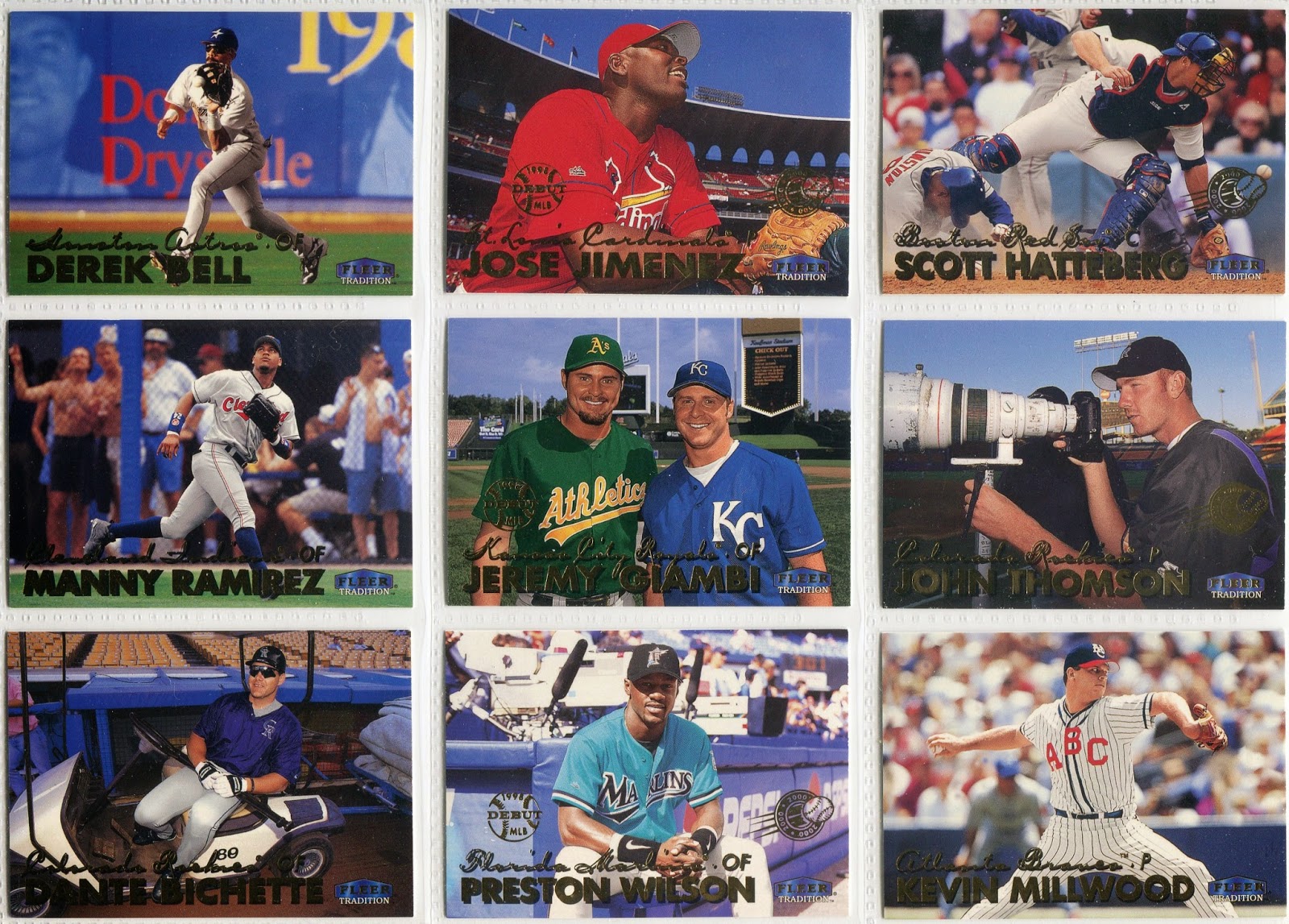 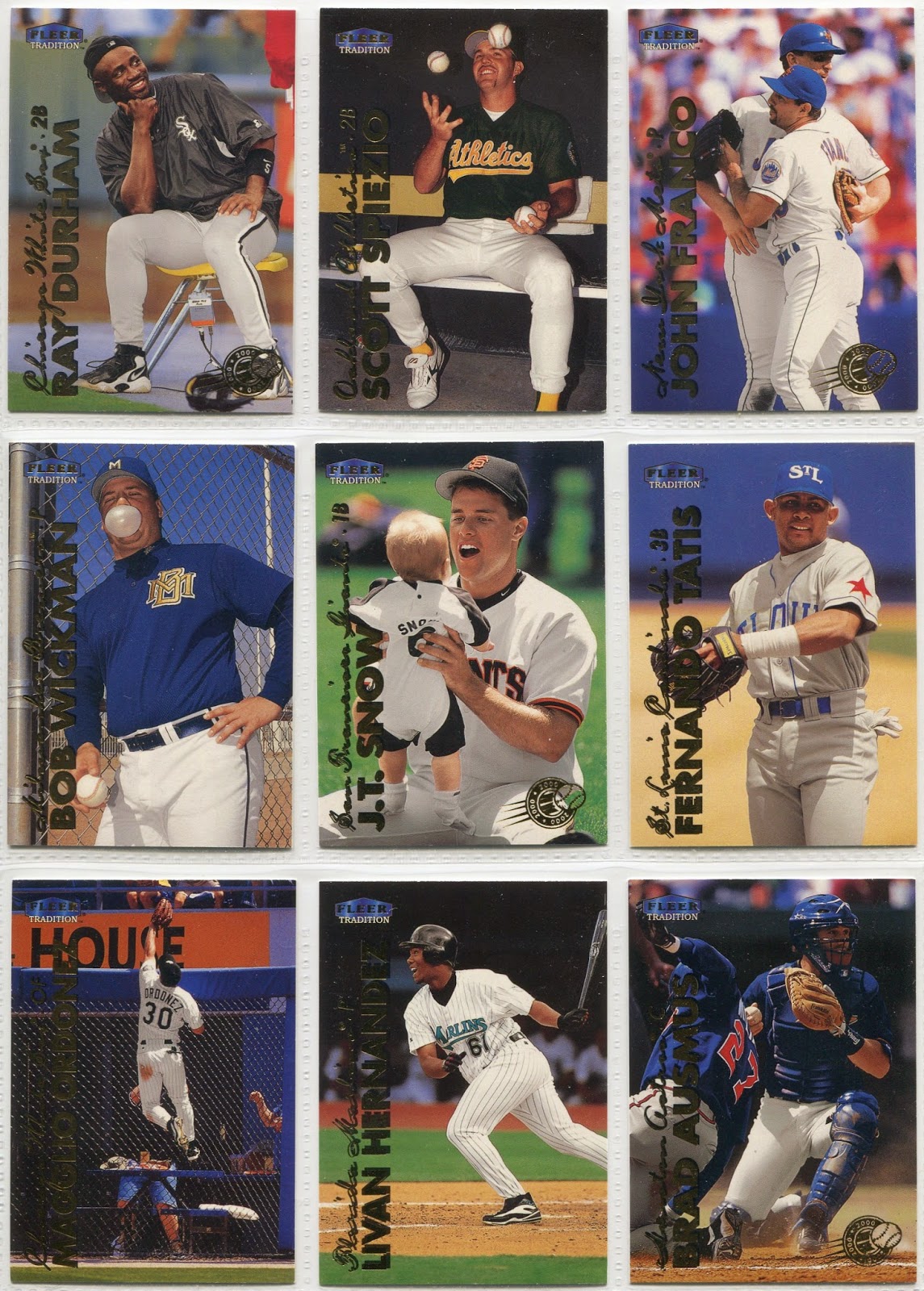 It left me wondering how I hadn't discovered the greatness of '99 Fleer Tradition before.

Every single Just Commons order I place seems to enlighten me on a new set. That honor definitely went to Tradition this time around.

Between golf carts, Pepsi ads, jugglers, bubbles, and so much more, I found a few dozen cards that were right up my alley. (Some of the ones Just Commons had in their inventory were actually Millennium parallels, as noted by the little baseball decal in the bottom-right corner of a few of these.)

Just when you think you have it all covered, something like 1999 Fleer Tradition comes out of the woodwork.

Ah, who am I kidding? 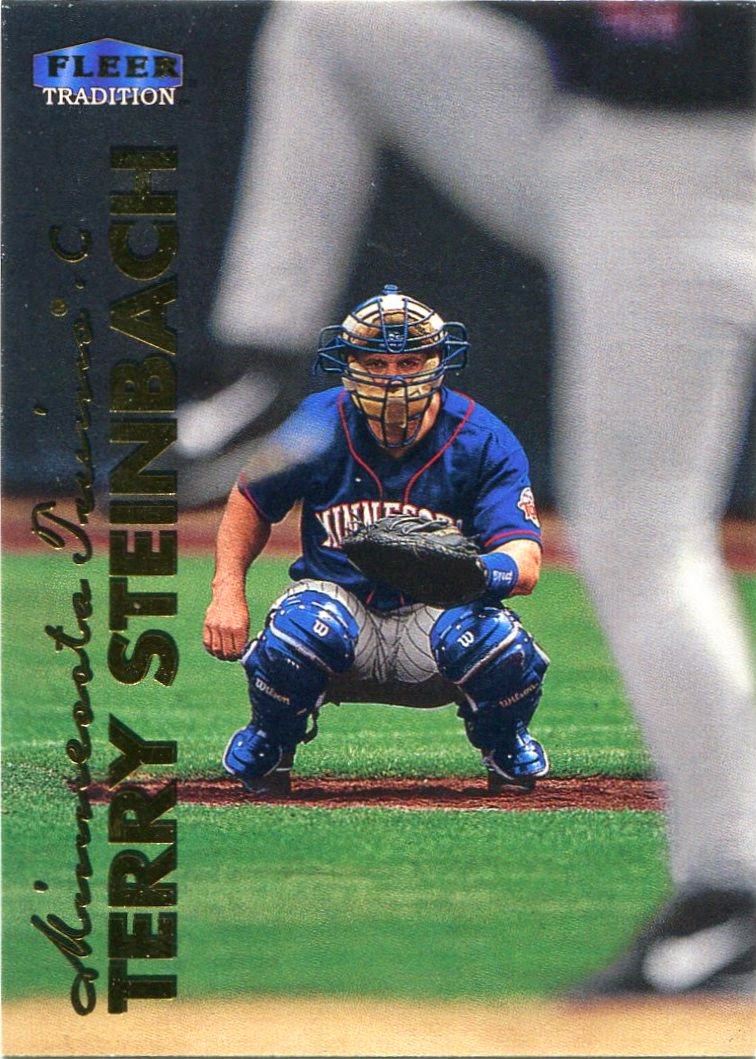 I'll never have it all covered.

I've come to grips with the fact that no matter how hard I look, gems like this Terry Steinbach will always be floating around somewhere in the cardboard universe. My job is to track down as many as humanly possible.

Though Steinbach isn't a "binder guy," this was probably the best Tradition card I found in this lot. I can't even begin to explain how much I enjoy this very Graduate-esque shot. To quote Dumb and Dumber, I like it a lot. (Okay, I'll stop with the movie references.)

Baseball photography is an art, and Fleer Tradition captures that in full force.

Still, as much as I enjoy Tradition, mini-collections, and 2015 Topps, they were only the tip of the iceberg with this latest Just Commons order.

I'll let you insert your own Big Lebowski quote here, because I can't choose just one.

Even with all these exciting cards.....I'm calmer than you are,dude....

So did the Moyer card cost you a dime?

Dude ... I have like 4 or 5 of the Bridges card already. I could've saved you some cash, dude.

Nice cards, its about time I check out Just Commons again, its been a couple months. I hope you saved some Royals for me.

The throwback that Arismendy is sporting on his 2015 card is beautiful. I really wish they'd return their home pinstripes to their 60s glory.

Just Commons is a wonderful thing. Just received my order the other day. And, yes, I concur on the greatness of '99 Tradition. There is some major frankenset fuel in there!

i always took that steinbach card to twinsfest and the twins' autograph party (back when they had such a thing) but i never found myself in steinbach's line to get him to sign it. it's a great card.

It was a good year for Tradition. I loved the photo selection but not the large foil font.