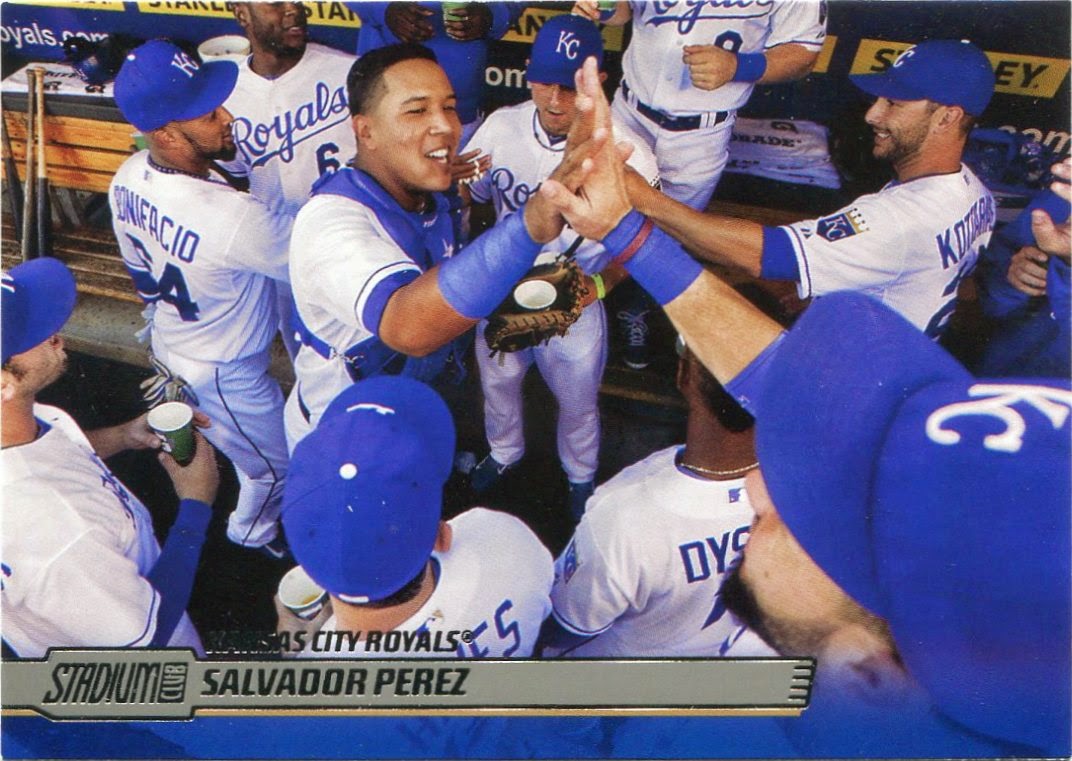 As awesome as those nickel boxes might've been, I don't go into a show expecting to find cards for Jeffersons.

If the name of this blog is any indication, FDRs are the name of the game around here. The upstart nickel bins put on quite a show on Sunday, but the dime boxes were their usual fantastic selves as well.

I've said this before, but the smaller shows like this one are better for low-end collectors like myself. Most vendors aren't just out to make a quick buck, which means that they're usually more willing to put out discount boxes. (They also have a tendency to be a lot friendlier.)

Sunday's dime bins were every bit as good as one you might find at a bigger show. The one slight disappointment was the fact that I wasn't able to scrounge up much of my remaining 2014 Stadium Club needs. Mr. Perez was one of just two SC base cards I found all day. (The other being a Wade Boggs.)

I can't complain too much, though, since this gem instantly became the centerpiece of my new Salvador Perez collection. 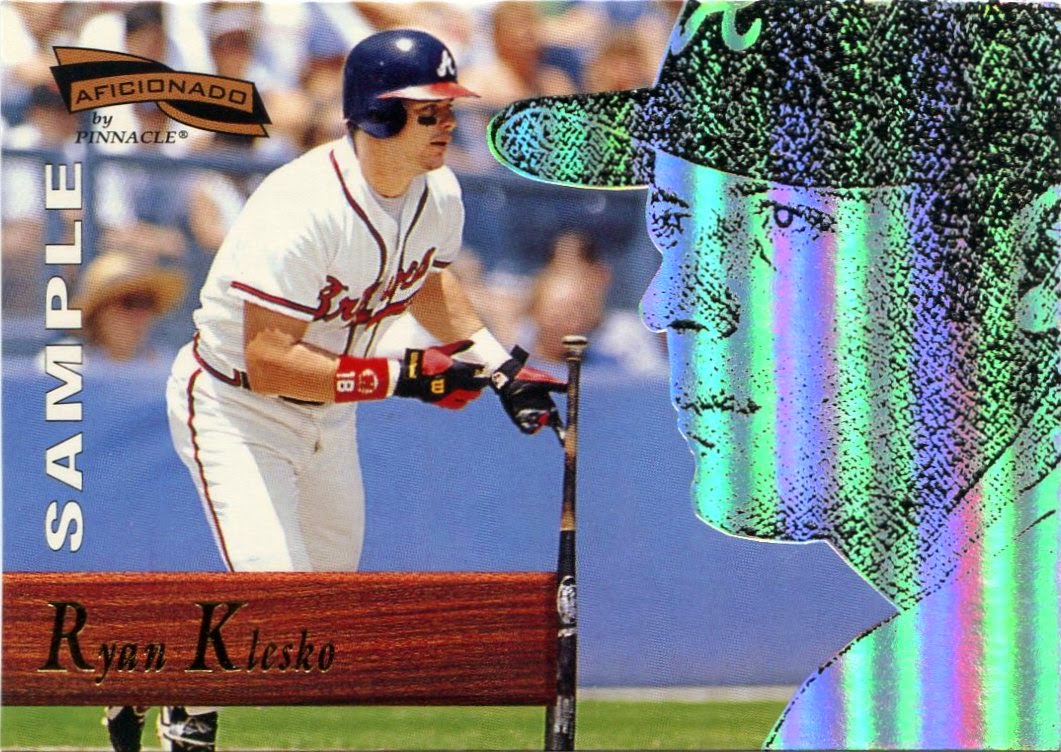 Aside from that, the dime boxes passed with flying colors.

I think I made purchases from six or seven different vendors on Sunday, and about half of them had dime cards on display. Heck, the very first table I saw when I walked into the place had a dime box, and this Klesko was one of the first cards I nabbed from it.

About a year ago, I made a pact with myself that I'd pick up every single one of these Sample cards I happened to come across in dime bins. I've kept my promise.

How could I not? 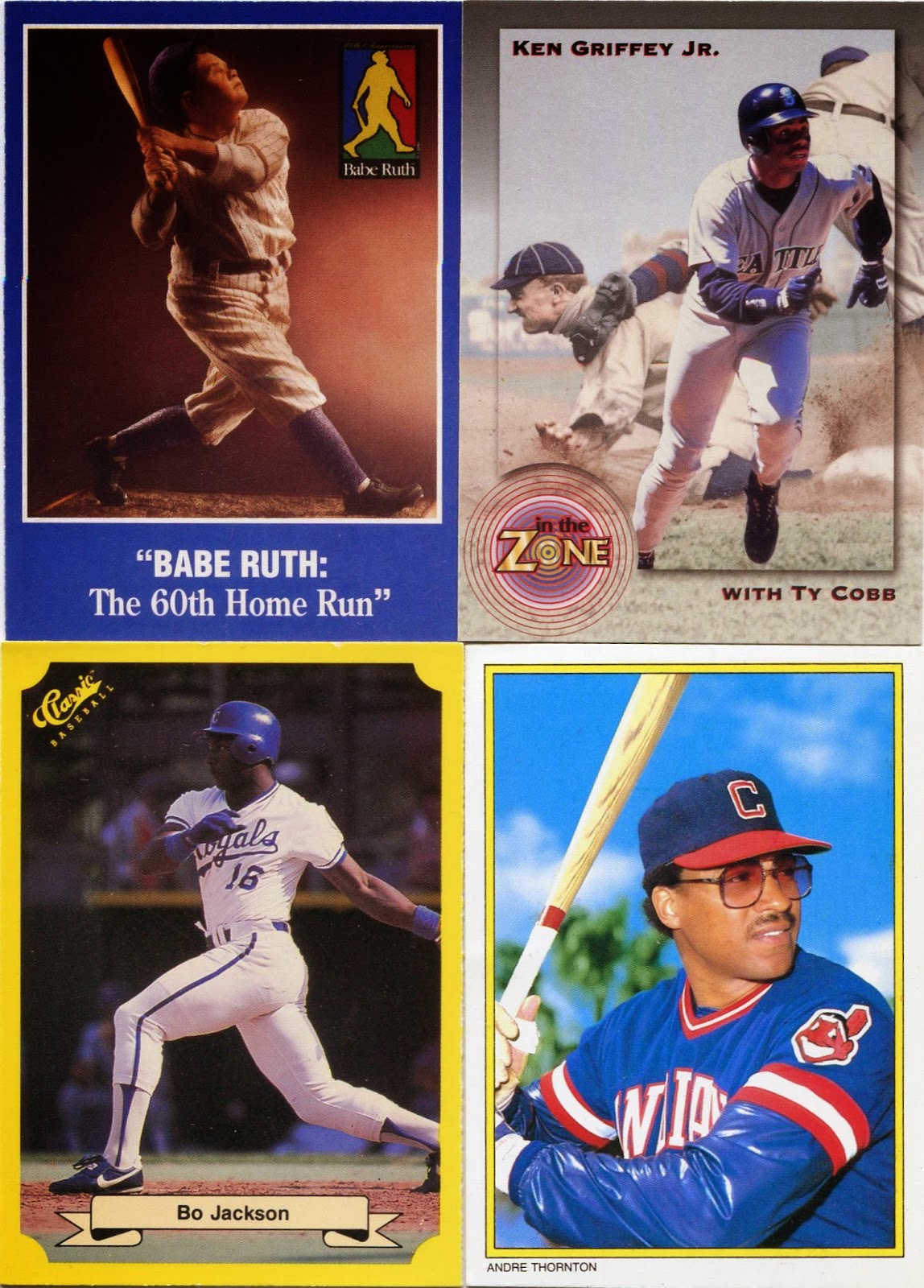 Oddballs as a whole were in full force on Sunday.

This quartet covers both ends of the oddball spectrum. The Classic Bo and Topps Glossy Thornton are more conventional oddities, as oxymoronic as that sounds. They're still technically oddballs to me, but they're not all that difficult to find.

Every now and then, though, you'll stumble upon cards that are downright stumpers. I haven't found much info on either that Ruth or strange Griffey/Cobb combo. Conventional or not, each of these four oddballs are cool.

I'm pretty sure all of them came from that first table as well. 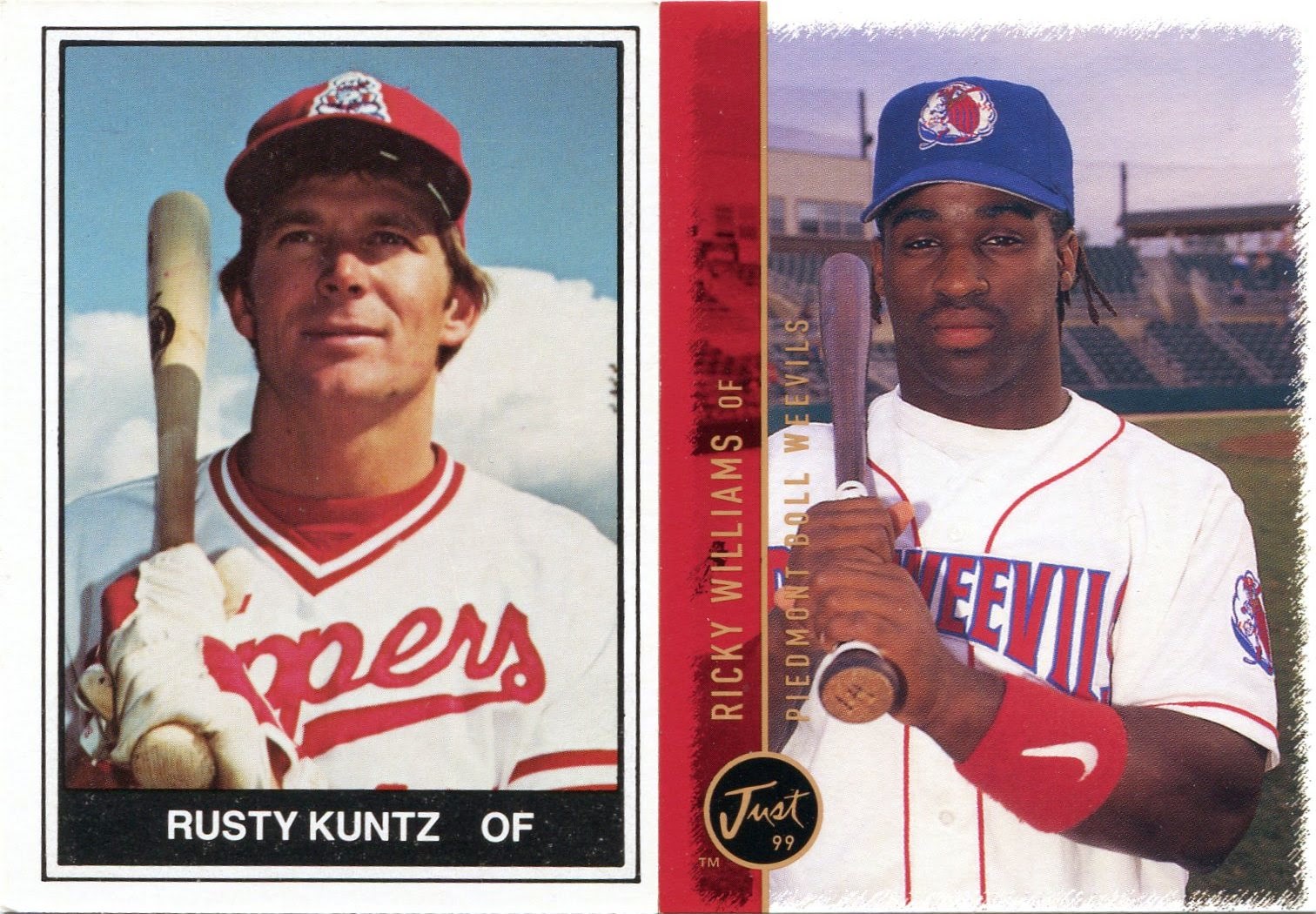 One thing I really enjoyed about that first vendor was that he had a healthy amount of minor league issues mixed into his dime boxes.

His handful of seasons in the Phillies' organization are all but forgotten now. 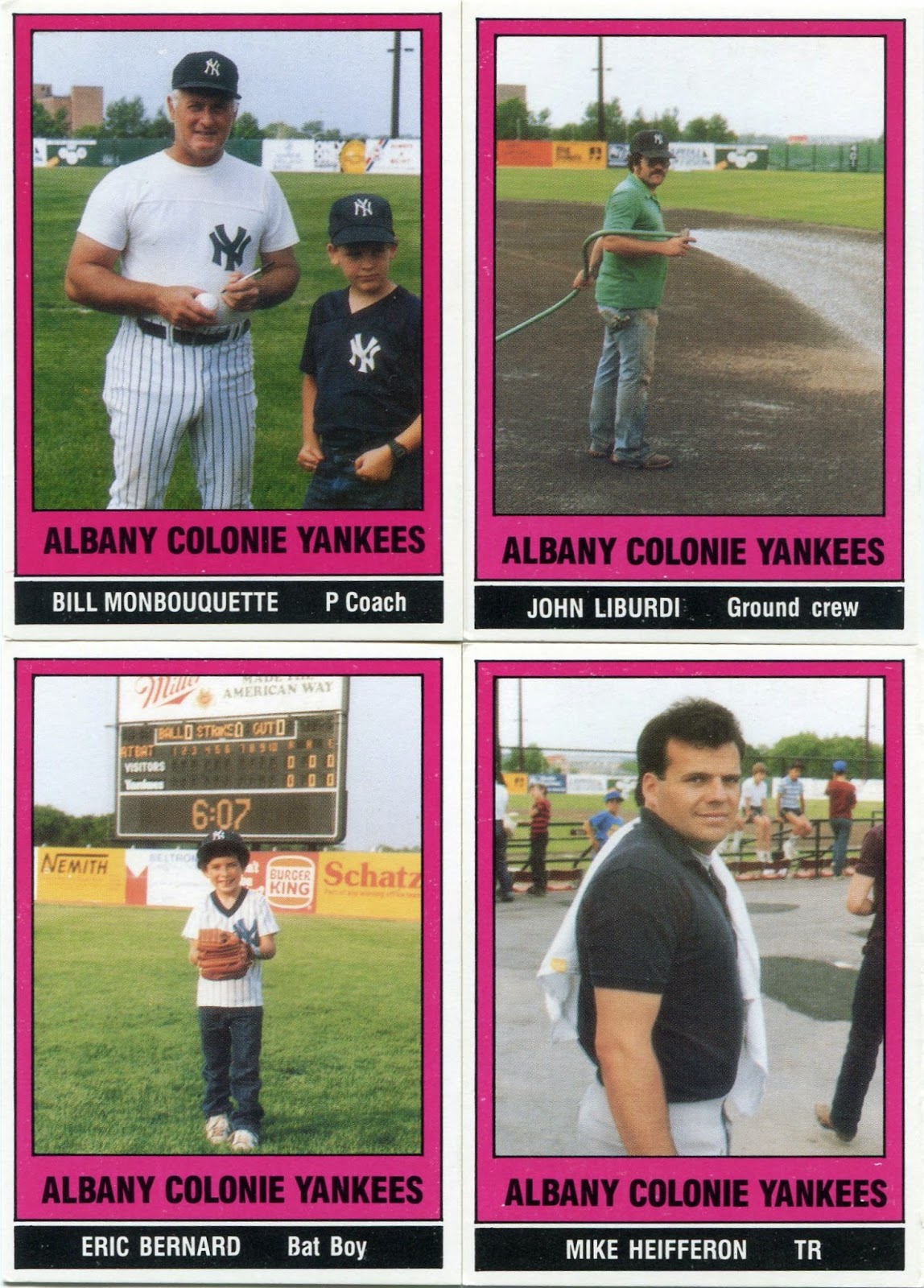 Players are fun, but cards like these are the real reason I enjoy minor league sets so much.

You're not likely to find anything of pitching coaches, groundskeepers, bat boys, or trainers in mainstream checklists. They're all fair game for minor league sets, though.

I don't know about you, but I'm especially fond of that groundskeeper card. 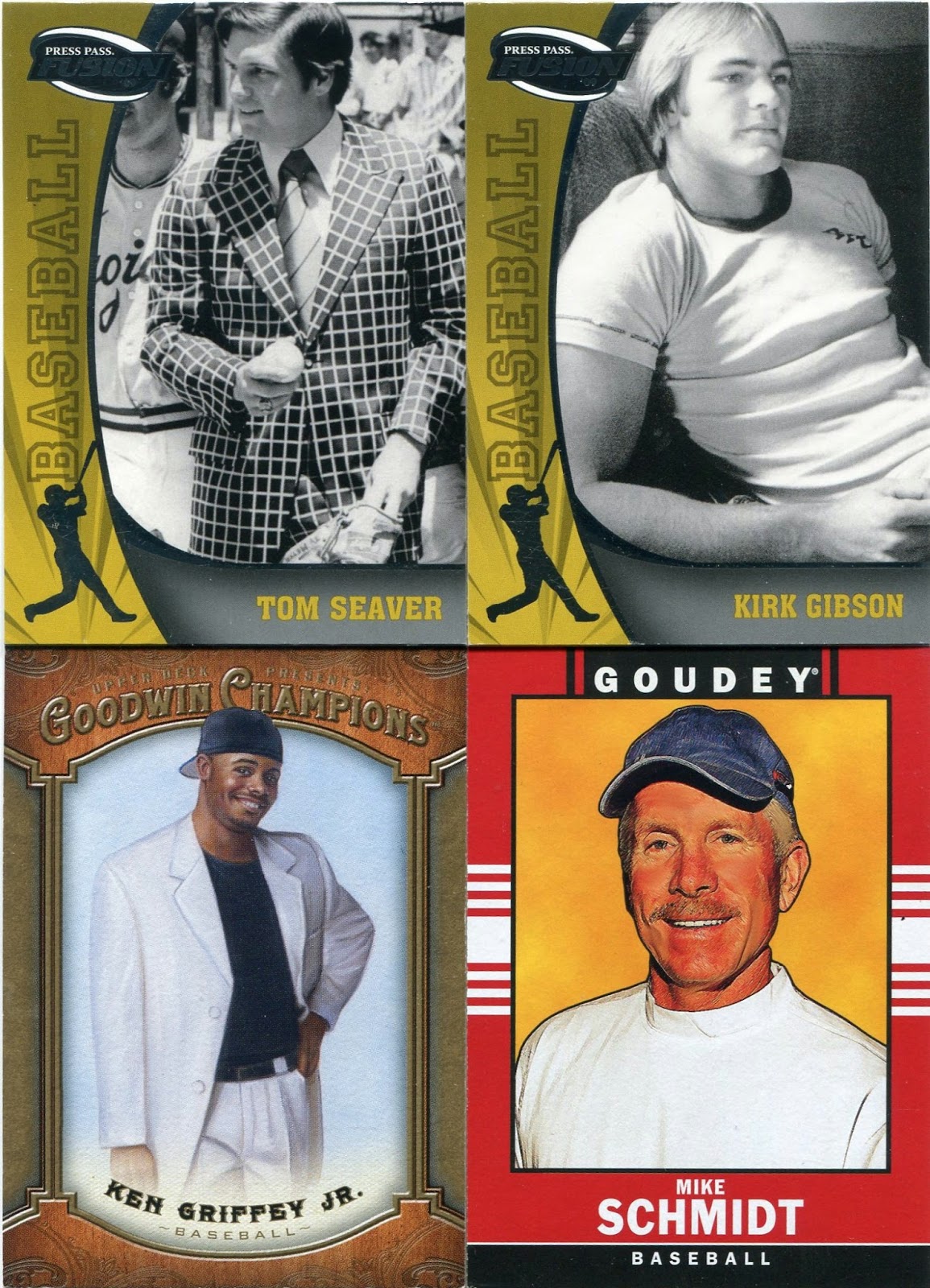 I've been picking up a lot of these so-bad-they're-good cards lately.

These, well...these might just be bad, period. I guess I'm just fascinated by the fact that photos like these could ever wind up on nationally-distributed baseball cards. Thousands of different collectors have spent their hard-earned money on packs of cards...and found these.

At least they only cost me forty cents. 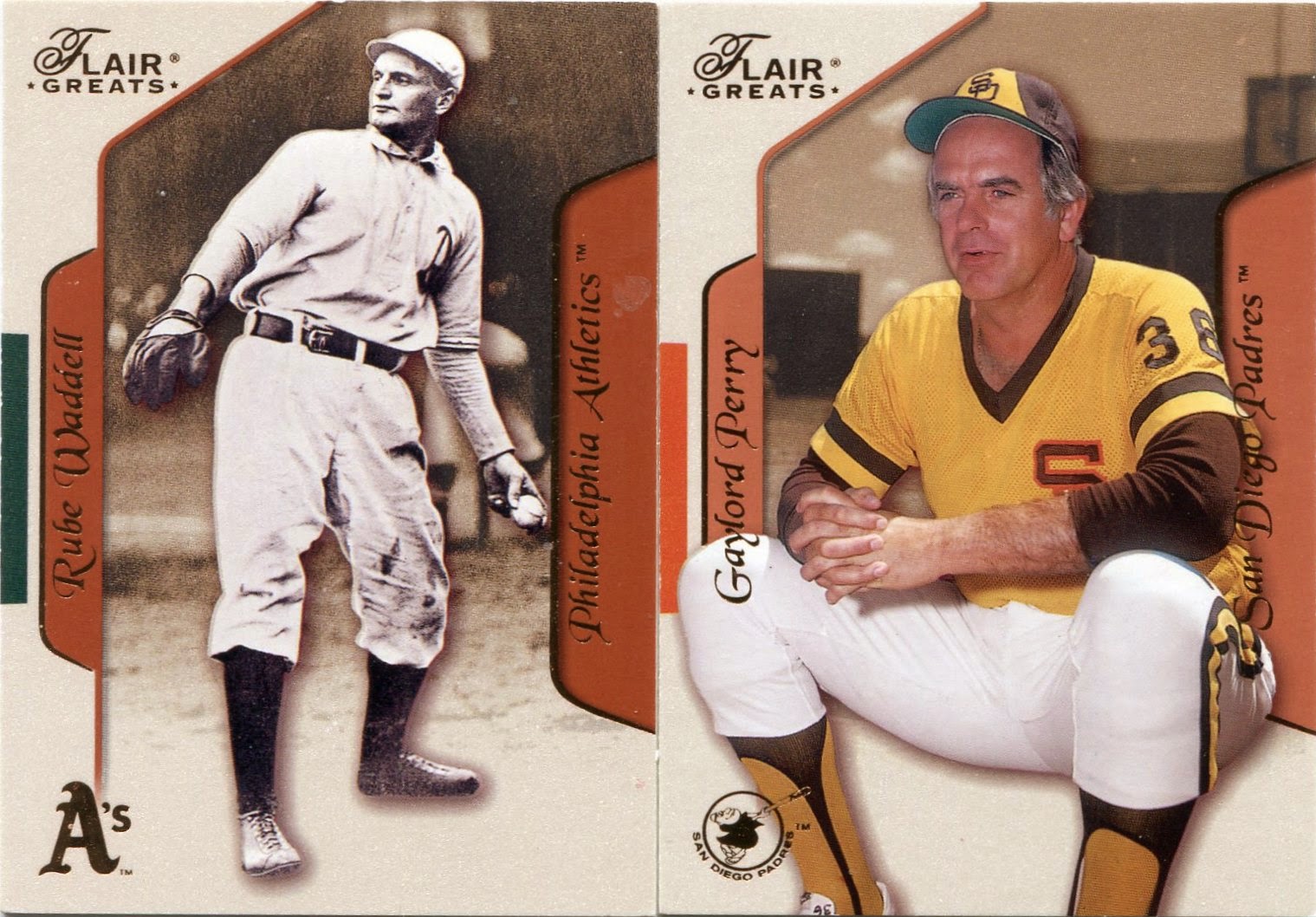 You know...cards of guys in actual major league uniforms. Not long ago, I mentioned that 2003 Flair Greats is one of the more underrated all-legend sets in history. These two Hall of Fame hurlers can back me up there.

And I can tell you that finding anything of Rube Waddell is an unmatched thrill for me. 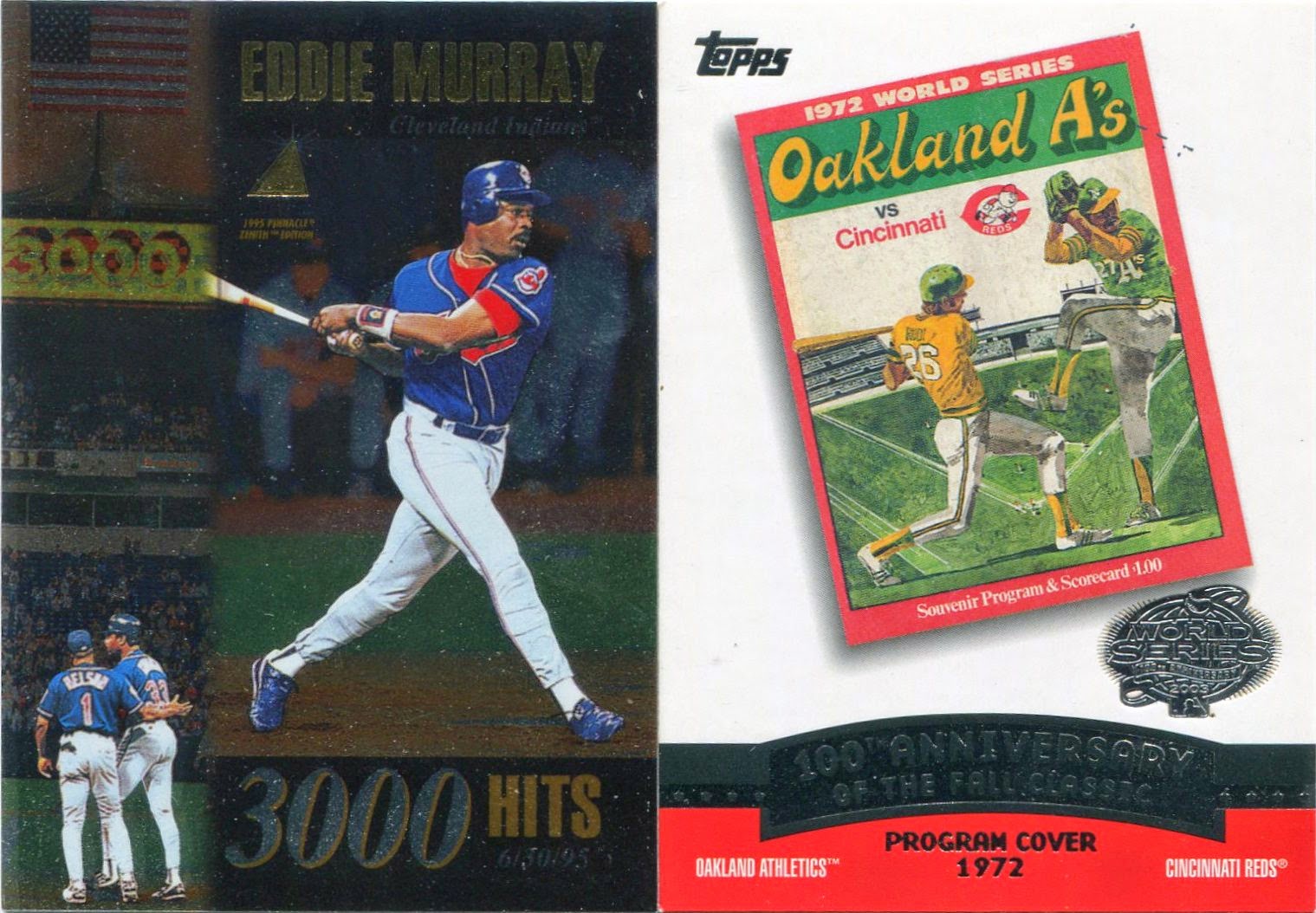 While dime boxes can highlight some of the stranger aspects of this hobby, they're always good for a handful of unexpected beauties as well.

I'm on a half-hearted quest to finish that World Series Programs insert set. Half-hearted might be too strong of a term, now that I think of it.

With the one-a-year pace I'm at, it'll probably take me a few decades to finish it. 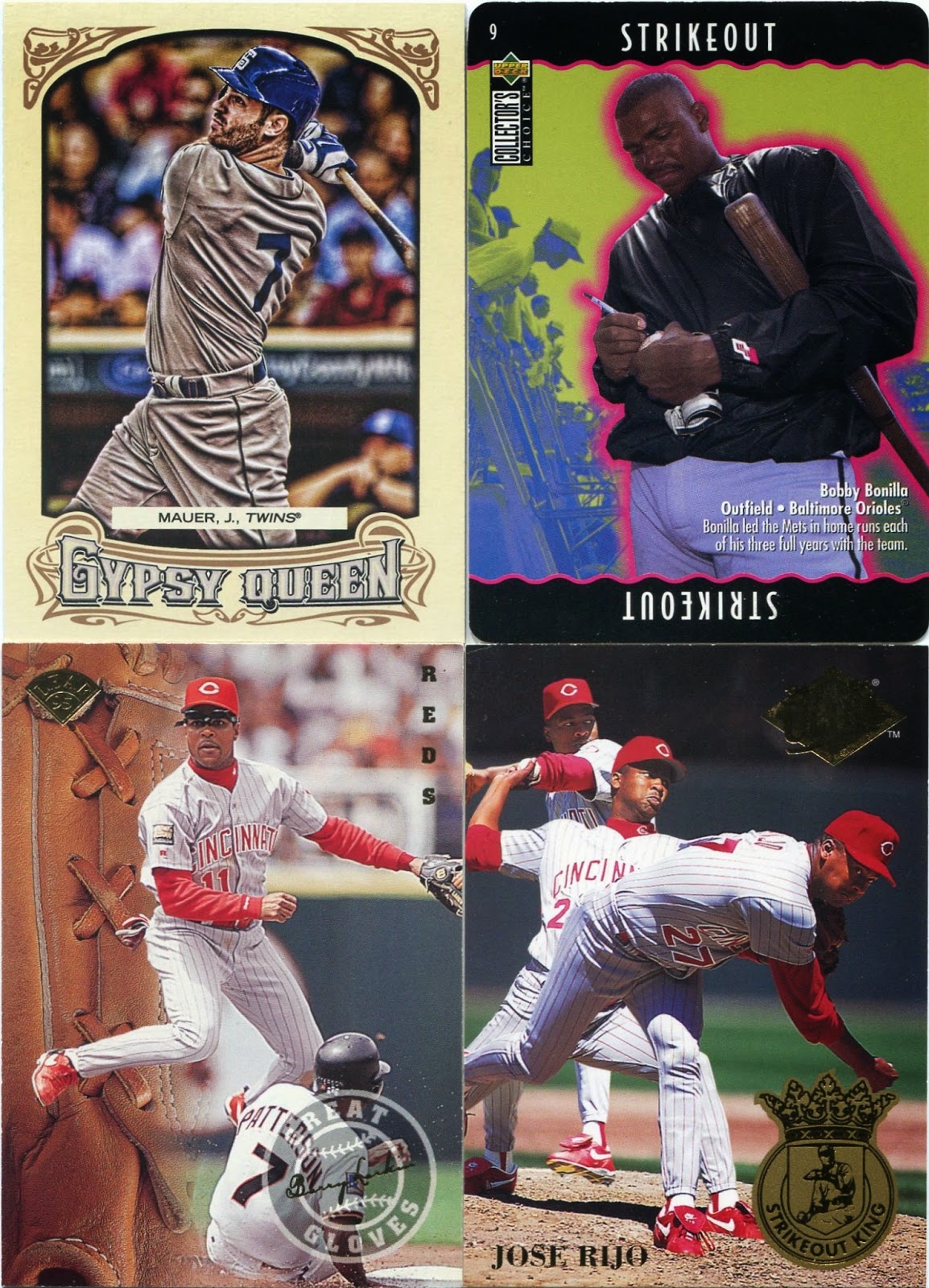 Without dime boxes, I doubt I'd have mini-collections.

A good dime dig almost always manages to beef up my various themes. 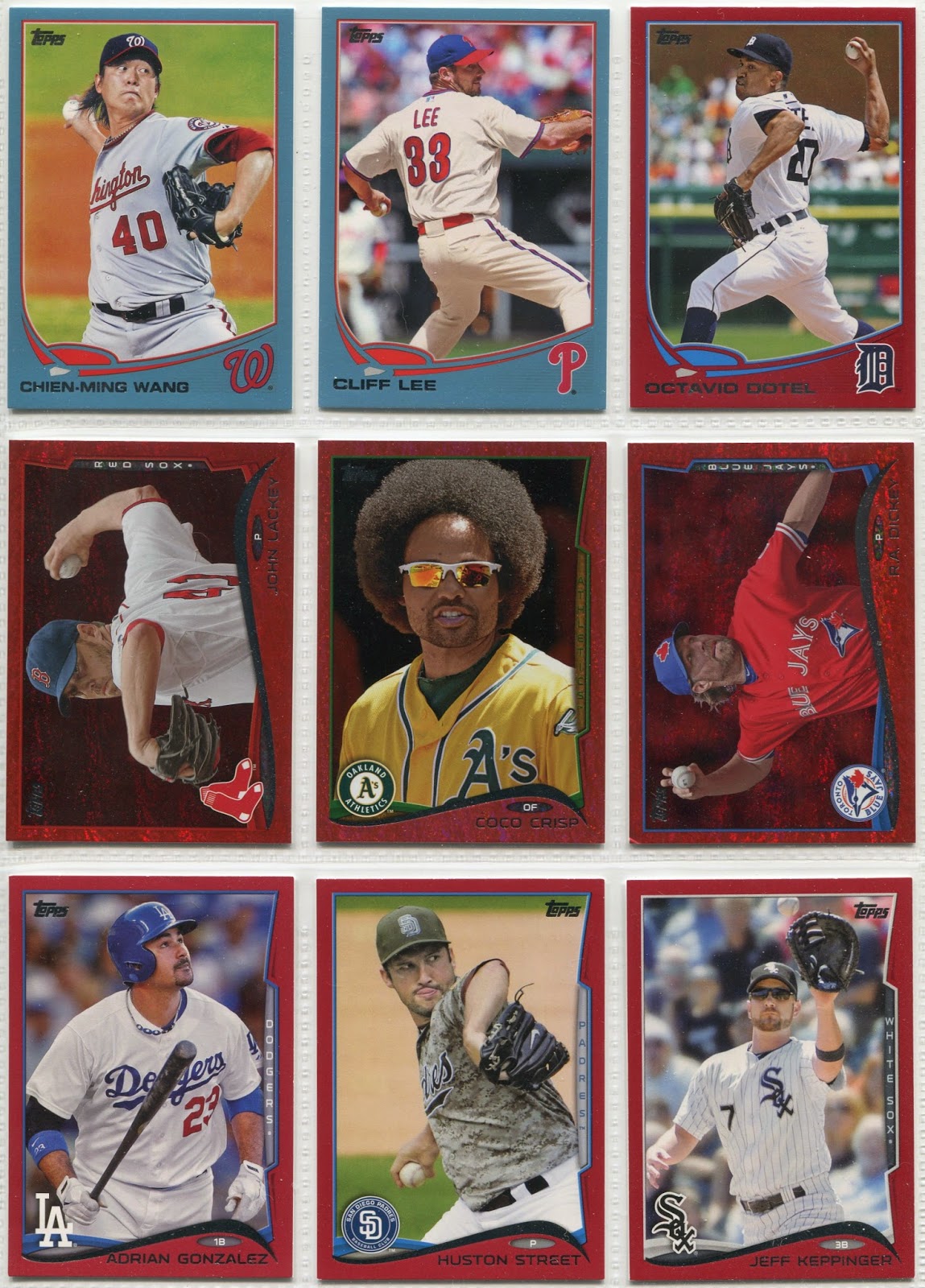 Much like the nickel boxes, the dime bins seemed to be coughing up parallels left and right.

Most of bloggers seem to enjoy them, but, given how easy they are to find in discount boxes, I really have to stop and wonder how popular parallels are with the collecting community as a whole. Maybe we're the minority when it comes to these things...which is fine.

More parallels of Coco's 'fro for us. 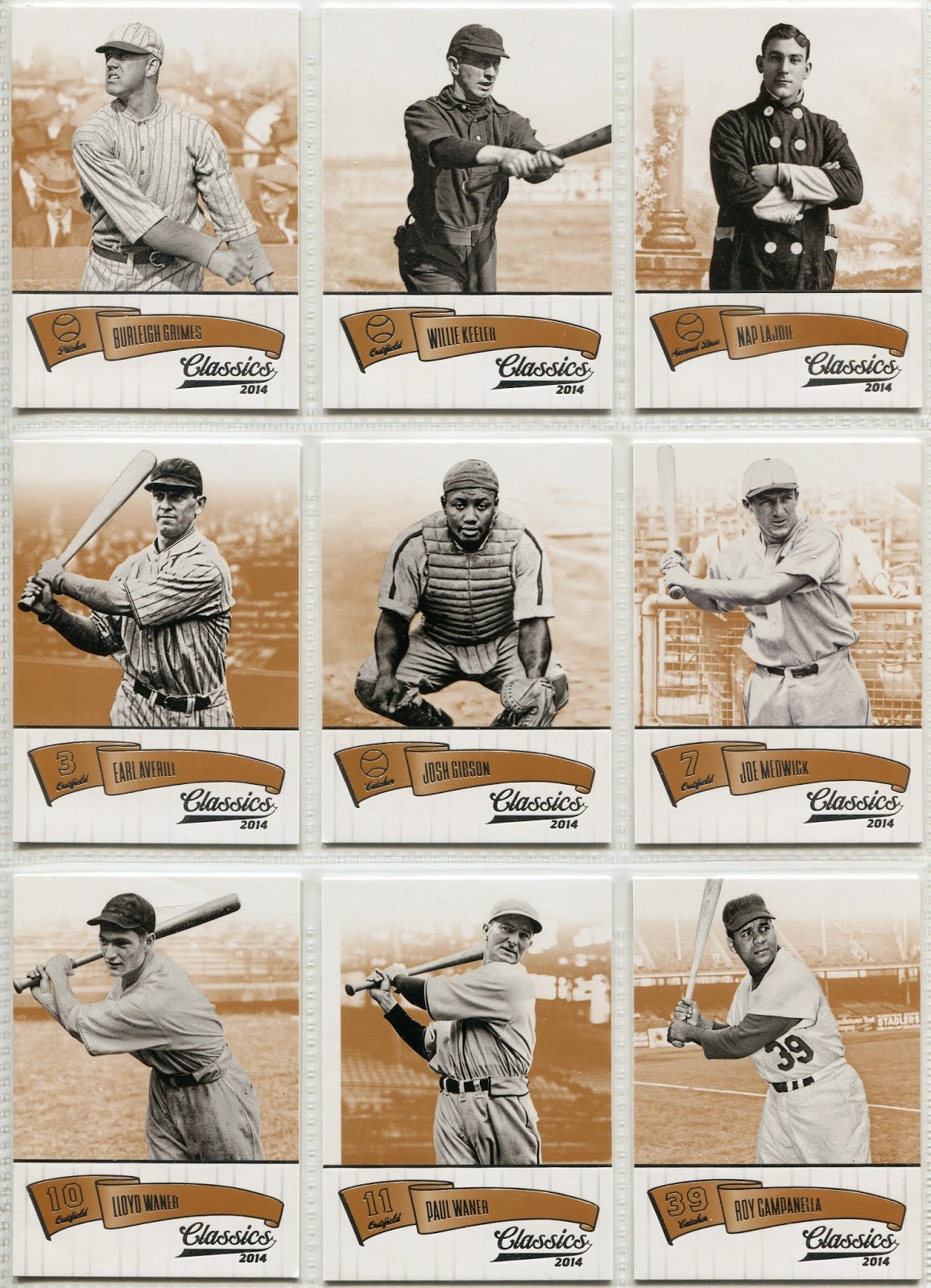 One of Sunday's vendors had an entire dime box stuffed with retired players.

Some of what I've already shown in this post (Waddell, Perry, Murray, etc.) came from those stacks. (I also had to remind myself that Derek Jeter was, in fact, retired whenever I found cards of him in there.)

Perhaps the most redeeming quality of the all-retired dime box was the large assortment of Panini Classics I dug up. This set, as far as I can tell, took the place of Hometown Heroes for 2014. The look isn't as good as Heroes was, but the player selection is right on par. (Dig the Waner brothers.)

I've struck out with finding packs of the stuff, but I had a sneaking suspicion I'd find some in a dime box sooner or later. 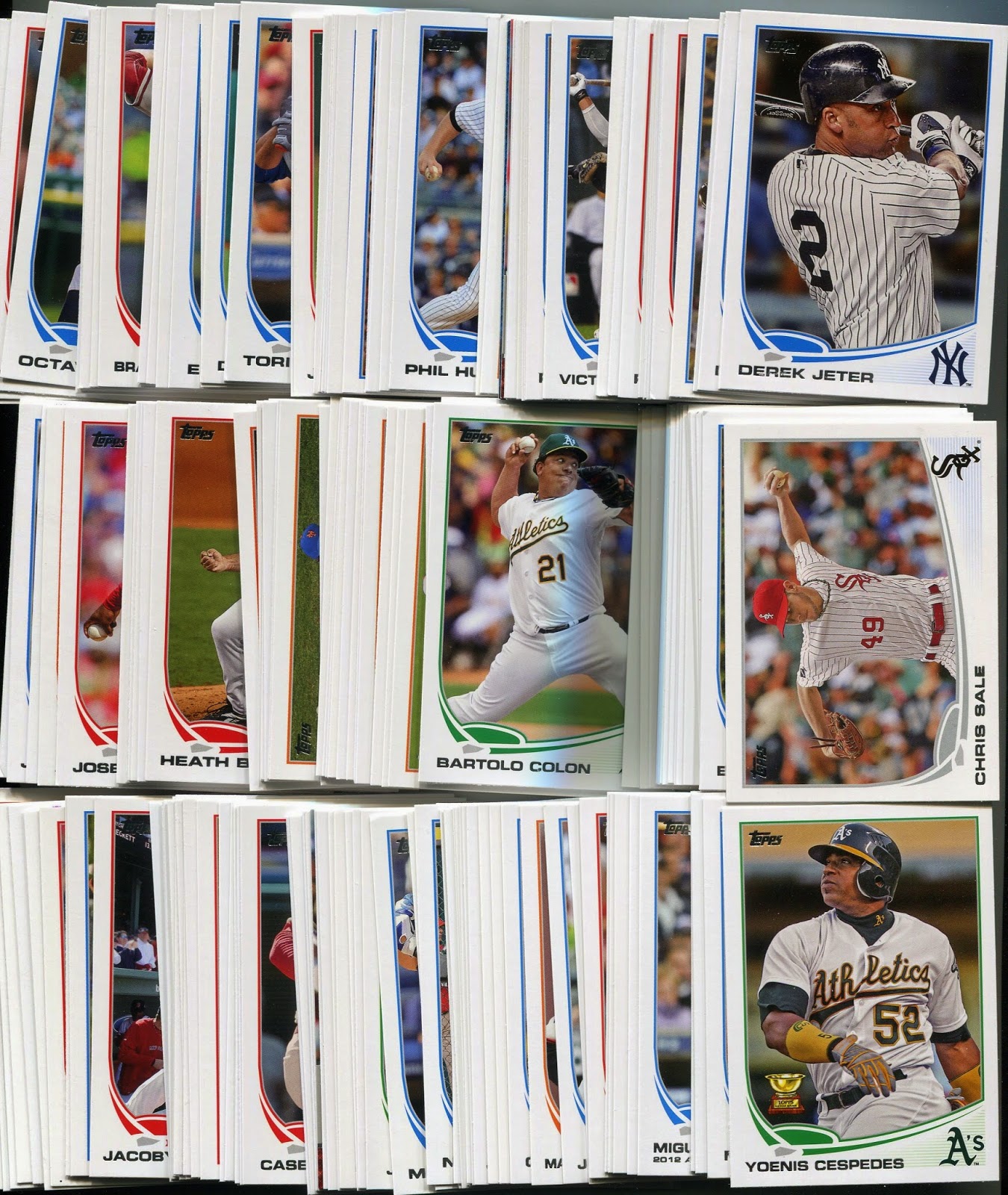 Right next to that all-legend bin was a dime box packed with more contemporary ballplayers.

About half of the 3200-count box was comprised of 2013 Topps Minis. I'm in a hopeless romance with these things. I went a little bonkers when I found around 60 minis from this set at my local flea market last summer.

So, how many did I buy from this guy?

They couldn't even all fit onto my scanner. I spent a good amount of time digging through all of them, but I picked up just about every single mini I needed from the set for well less than I could've spent on a box of 'em. (Even at their highly-discounted current rates.)

Put a dime box of Topps Minis in front of me, and there's no telling what might happen. 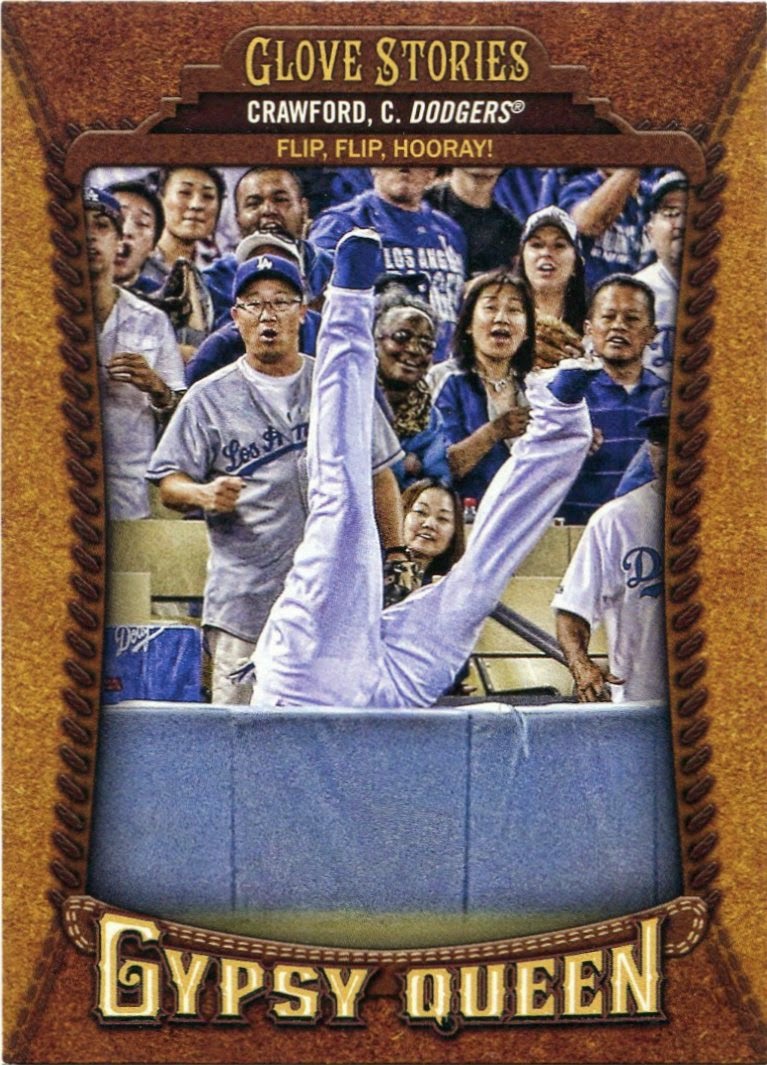 Because of how much time I put into mining for minis, I didn't take a close look through the rest of the guy's contemporary dime box.

In hindsight, it's a good thing I chose to take a closer look at the last few stacks in there, because out of the very last section of the very last row of that box came came what I think was my greatest dime find of the day with this card of Carl Crawford.

Or, more appropriately, this card of Carl Crawford's legs.

Had I owned it before I did my "Cards of the Year" countdown, this Gypsy Queen insert probably would've slotted in at around #5 or #6 on that list. It's the kind of card that someone like Pacific or Pinnacle would've been apt to create. Not Topps.

To me, this equally strange and beautiful card confirms the fact that Topps does still have a slight sense of humor. It's dying, yes, but it's still there.

Between Carl Crawford's legs, groundskeepers, Rusty Kuntzes, and just about everything else, the dime boxes were firing on all cylinders on Sunday.

You can't find a mix like this anywhere else.
Posted by Nick at 6:28 PM

Awesome haul Nick! I'm intrigued by the Griffey, I love the Josh Gibson, and that Ricky Williams is an old favorite in my collection! Great stuff!

Don't you worry, the Gypsy Queen Crawford made a 2014 countdown on a certain blog. It was the second best card of the year.

The World Series program set is fantastic and I've really got to get going on finding more.

I love those posts ! shows just what kind of variety there is out there, and how little I know

The elusive Groundskeeper "In Action" card!

Dime boxes are the best. There. I said it.

I have that Ruth card - it is actually an ad for the figurine pictured.

I love those Albany-Colonie Yankees cards - I actually have the Eric Bernard.

Man o' Man! Sweet grabs as always. Just once I wish I could go to one of the shows you get to. Then again, I'd be happy to get to any real show around here too.

The "Flip, Flip, Hooray!" caption is just icing on the cake of that Crawford card.

So what are the top ten cards you've ever found in a dime box?