Into the Sunset, Pt. 29: Pedro Martinez 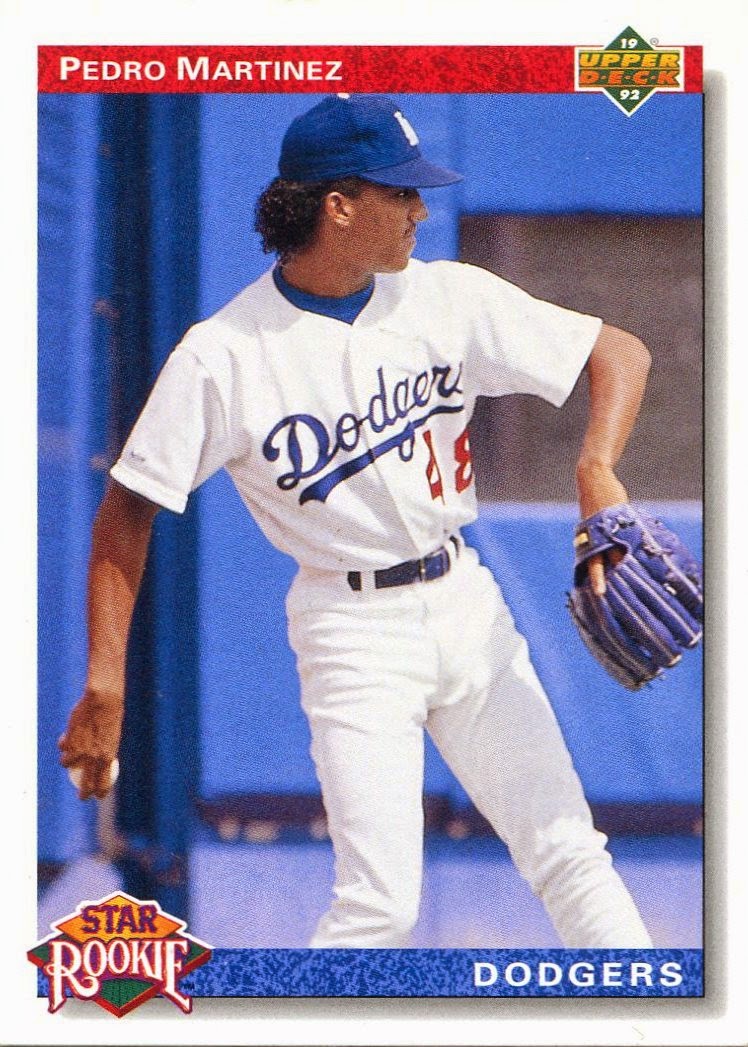 This year's Hall of Fame class is perhaps the strongest I've seen in my lifetime.

Pedro Martinez, Randy Johnson, John Smoltz, and Craig Biggio were four of the greatest players of my generation and are more than deserving of a spot in Cooperstown. And, setting Biggio aside, the three pitchers from the 2015 Hall of Fame class have one other thing in common.

They all ended their careers in unfamiliar uniforms.

I've covered the other two hurlers in past sunset posts. "The Big Unit" closed out his career as a San Francisco Giant. Smoltz split his final season with the Red Sox and Cardinals after 20 years with the Braves.

Pedro Martinez ended up with a similar fate. Though he had some terrific years with the Expos and Mets, I'm sure most fans (myself included) remember him with the Red Sox.

If we're just talking cards, though, I tend to think of "Petey" with the Dodgers, since this 1992 Upper Deck rookie is the first card of his I ever owned. 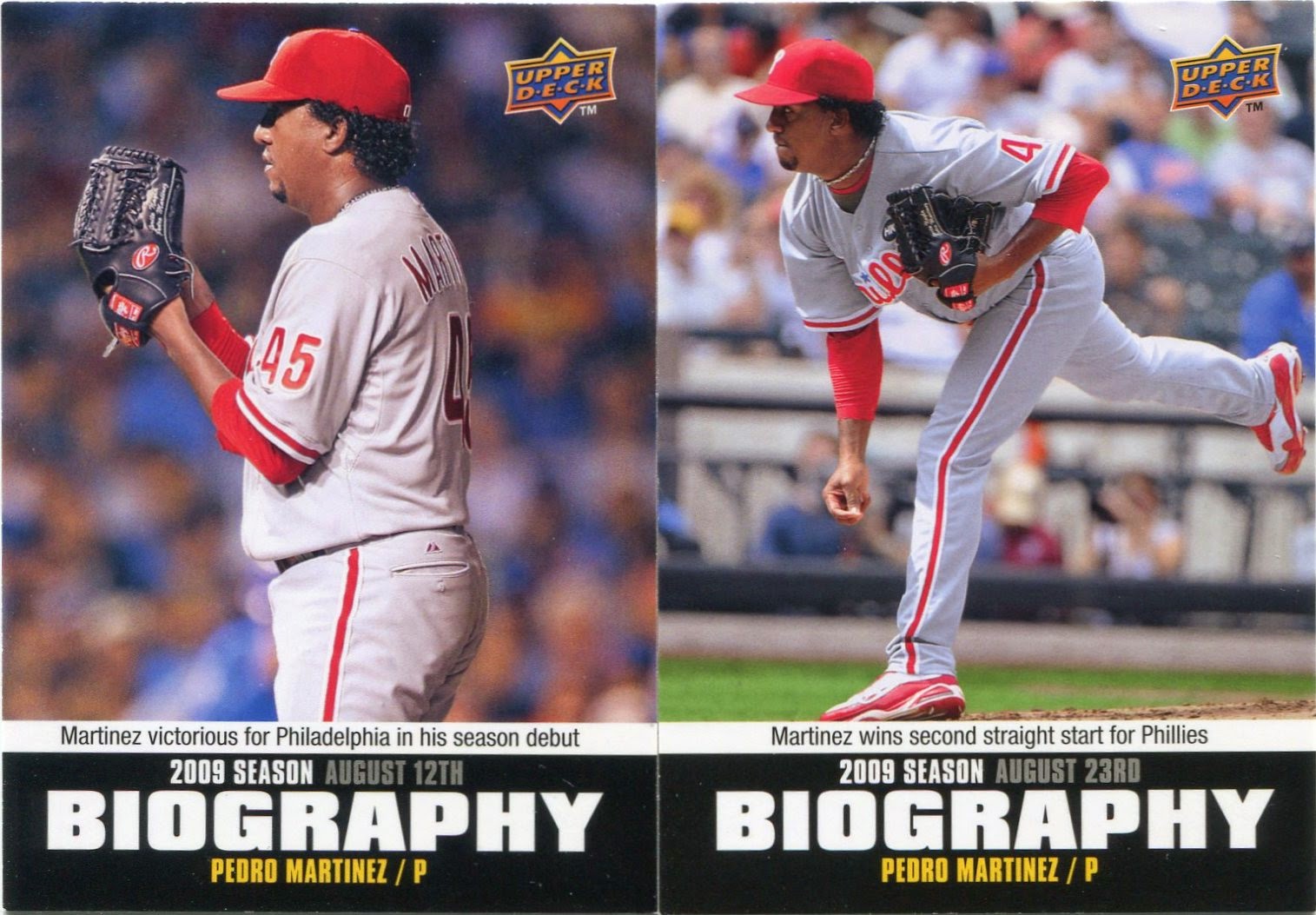 However, I doubt a single soul best remembers Pedro Martinez as a Phillie.

He signed with the Phillies in July of 2009 after sitting out the first few months of the season. For some reason, I have a vivid memory of his first start with the club, a night game against the Cubs at Wrigley.

Contrary to the ends of a lot of other careers, Pedro actually wasn't bad in his final season. He went 5-1 with a 3.63 ERA in nine starts with the Phillies, and even had a few solid outings for them in the postseason. He'd retire after the 2009 season.

Sadly, Martinez never received a true sunset issue with complete career stats on the back. The only company to produce cards of him in 2010 was Upper Deck, who granted him two spots in their "Season Biography" series. However, these don't qualify as "official" finales because I don't count inserts as sunset cards.

All told, I own four base cards of Pedro Martinez as a Phillie, all from 2009. 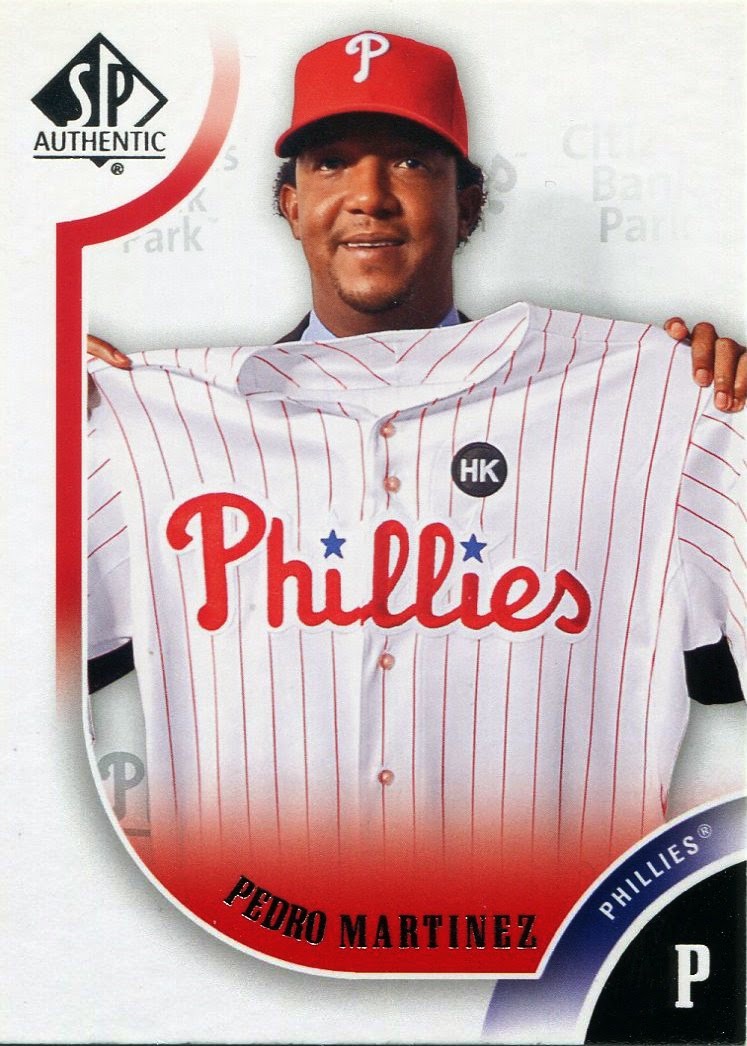 Do you miss SP Authentic?

Still, at least they managed to get in a card of Pedro as a Phillie before closing up shop for good. And, contrary to most of what SP Authentic had to offer, this isn't half bad. (Note the Harry Kalas memorial patch.)

We need more of these press conference shots. 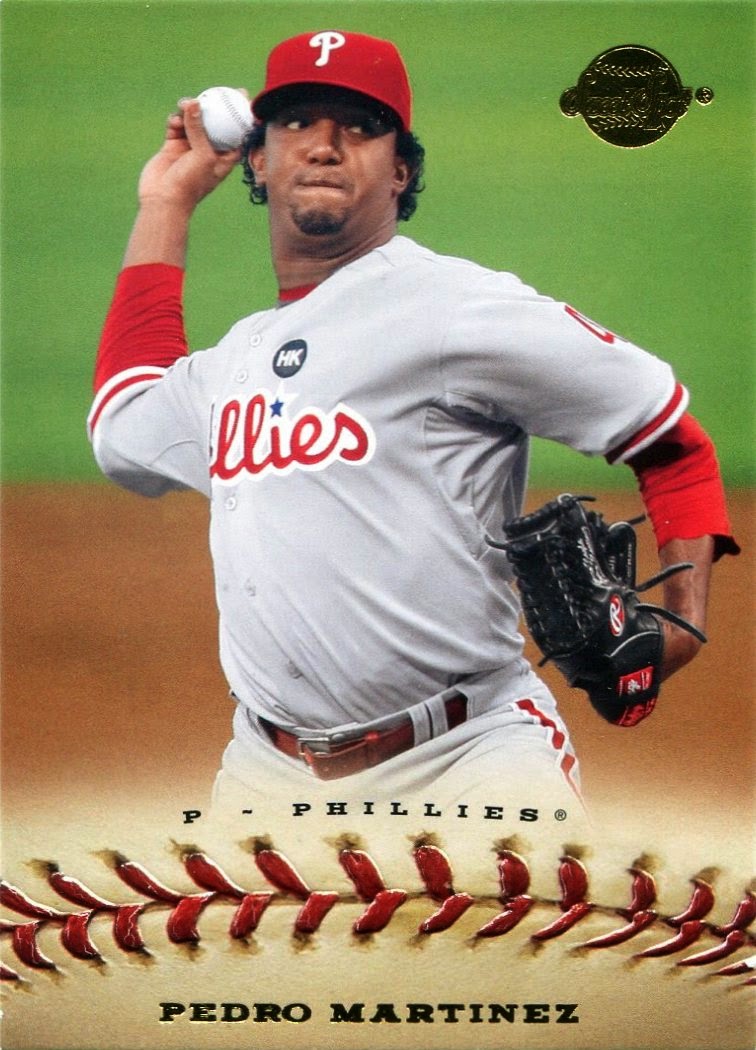 I don't think many of us miss Sweet Spot very much, either.

I must admit, though, this layout is actually pretty neat. If you've never held one of these before, the seams in the design do actually feel like seams on a baseball.

Still, reminiscing about long-forgotten brands like SP Authentic and Sweet Spot makes me realize just how much overkill was on the shelves back in the day. 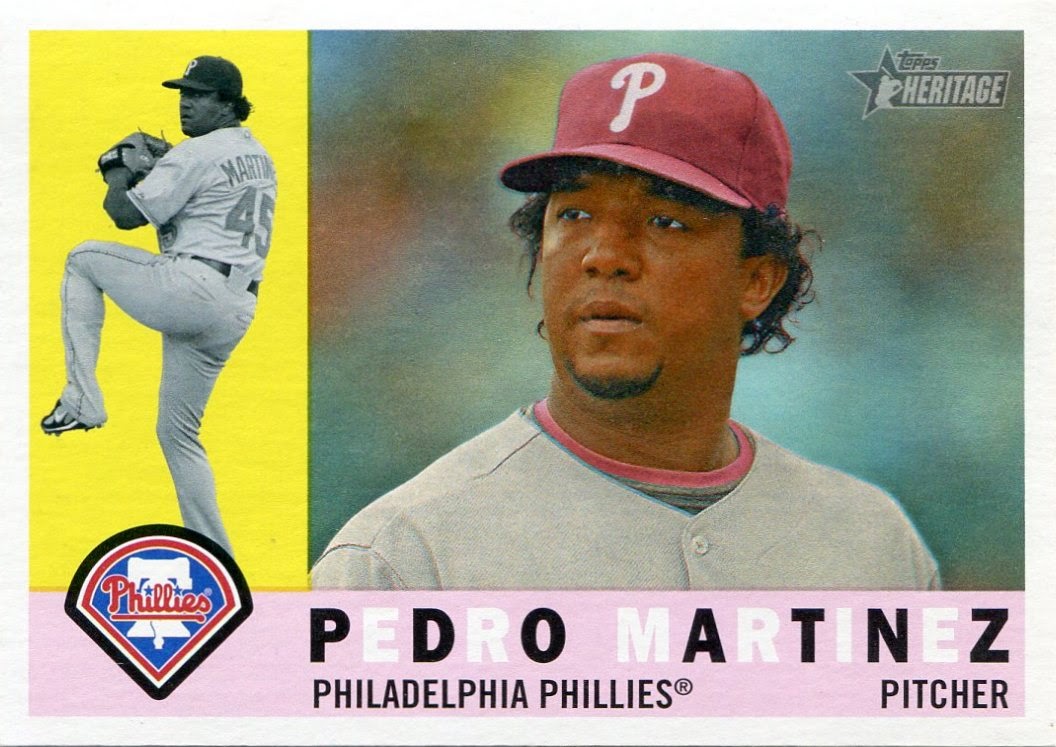 Back when Heritage High Numbers was available to us mortals. Back when I could, you know, actually own them without having to pay out the wazoo. Back when it wasn't an obvious cash grab by Topps.

This design isn't very tight (white letters on a pink background?), but it still qualifies as a sunset card for Pedro. 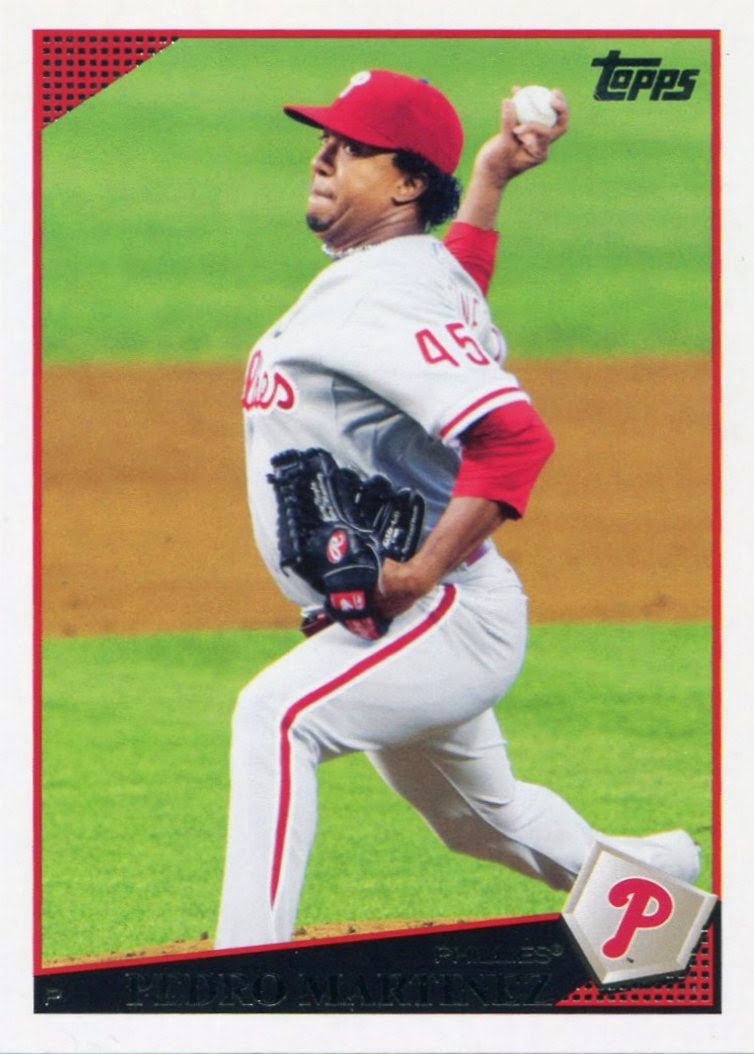 Because Martinez didn't sign until July, Topps had to wait until Update to produce a Flagship card of him as a Phillie.

I can't be sure, but this looks like a shot from that first start at Wrigley.

Given how dominant Pedro was during his Hall of Fame career, it's a little disappointing that his cards sent him out with such a whimper. This quartet doesn't provide a whole lot of excitement, and, as I mentioned, he never did receive a true sunset issue.

Still, I guess the sheer oddity of seeing him as a Phillie is enough for me. Baseball fans of generations to come will see Pedro's Hall of Fame plaque with the "Philadelphia, N. L., 2009" engraved on it, and they'll all say the same thing.

Pedro Martinez was a PHILLIE?
Posted by Nick at 6:02 PM

As a Yankees fan I remember Martinez's time as a Phillie very well.

I love Pedro. Kershaw was fantastic last year, but the best season I've ever seen from a pitcher was Pedro's 2000 season.

Was going to echo Zippy Zappy - the Yankees, especially Hideki Matsui, hit him hard in the last game of the 2009 World Series.

Being a Met fan ,I remember It all too well.Even though he left us to sign with our rivals,there wasn't any ill will.Pedro was a class act.