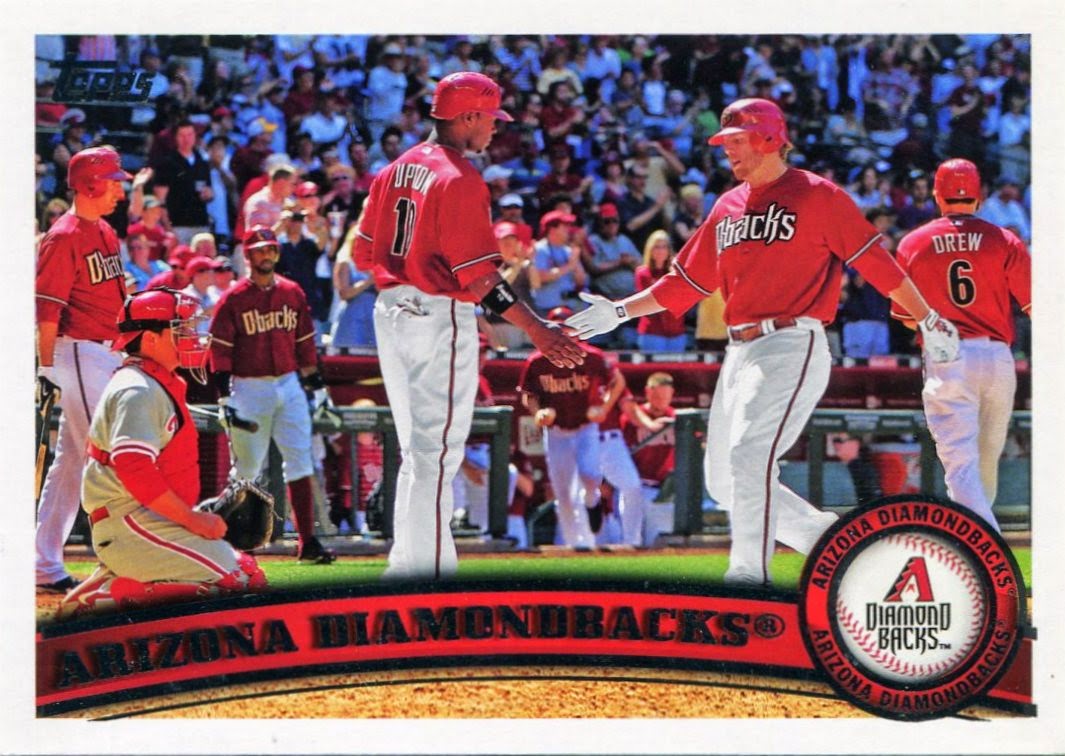 Well, it's time we talked about the grittiest team in baseball.

I'm sure even Diamondbacks fans will tell you that the whole "gritty" thing got out of hand the past couple years. A couple different incidents sure soured me on their hard-nosed attitude. It's one thing to be gritty, and quite another to be good. (And let's fix those ghastly uniforms, okay?)

But, now that the Diamondbacks have made some in-house changes, I'm willing to wipe the slate clean if they are. I've always felt like I have a special bond with the club, since I remember being fascinated with the concept of an expansion team as a six-year-old when they broke in with the Devil Rays in 1998.

Because the Diamondbacks are a relatively new franchise, they might not have as strong of a "Short Term Stops" squad as some other clubs.

Still, I think you'll find some interesting blasts from the past on this roster. 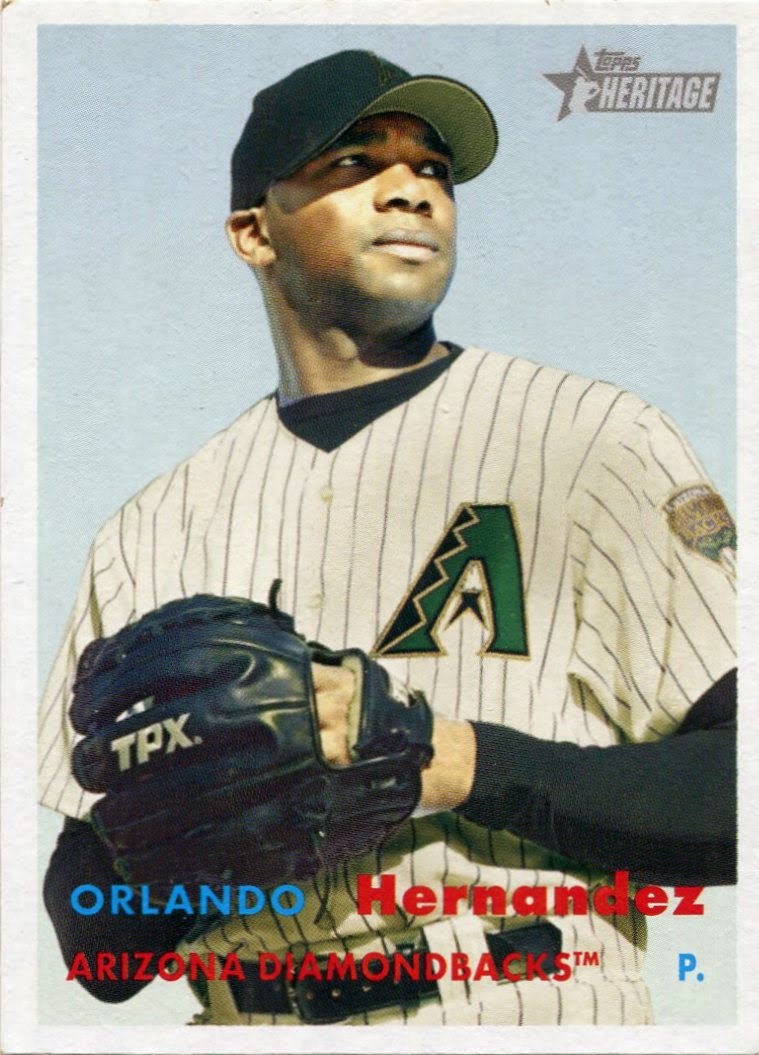 These posts can be educational for me as well.

I knew that El Duque's time in Arizona was short, but I had no idea just how short it was until I started my research. Turns out Hernandez pitched in only nine games for the 2006 Diamondbacks, going 2-4 with a 6.11 ERA before being dealt to the Mets in May of that year.

His big league career went out with a whimper after the 2007 season. 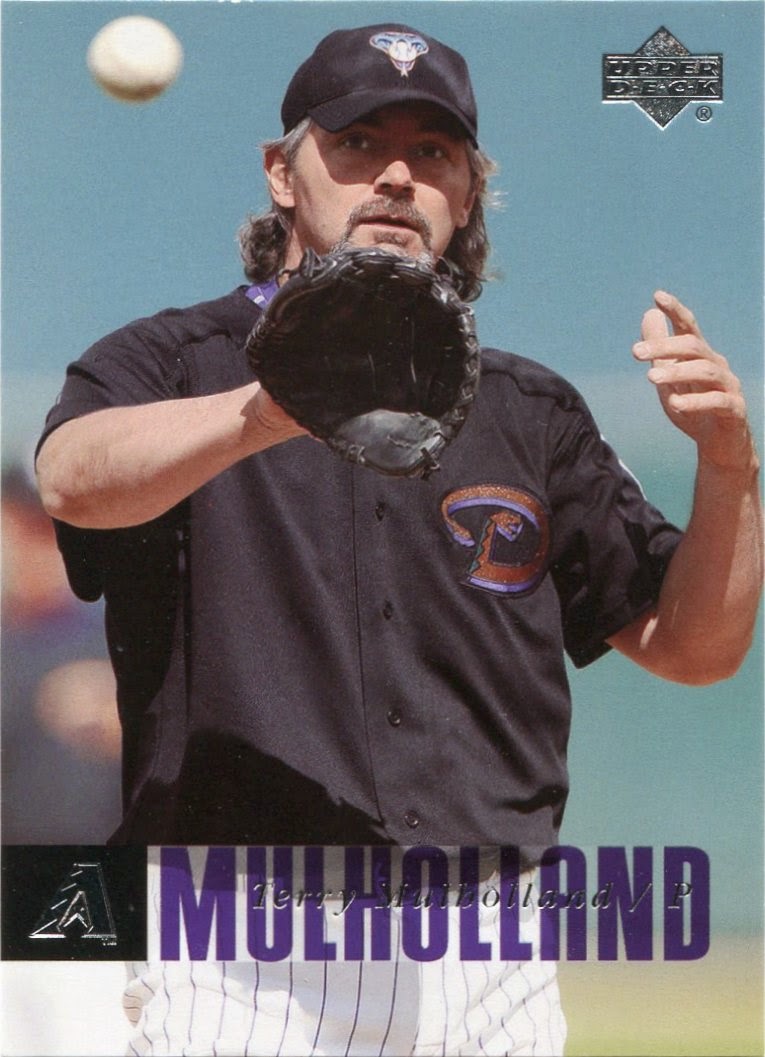 Expansion teams seem to have a knack for getting ballplayers past their prime.

I don't know about you, but I wouldn't have even known that Terry Mulholland pitched until 2006 had this card not existed. I'm about 99 percent sure it's his only one as a Diamondback.

In his age 43 (and final) season, Mulholland posted a 9.00 ERA in three total innings (five games) in Arizona before being released in June of 2006. The Diamondbacks were the last of eleven teams he'd play for during his 20-year career. 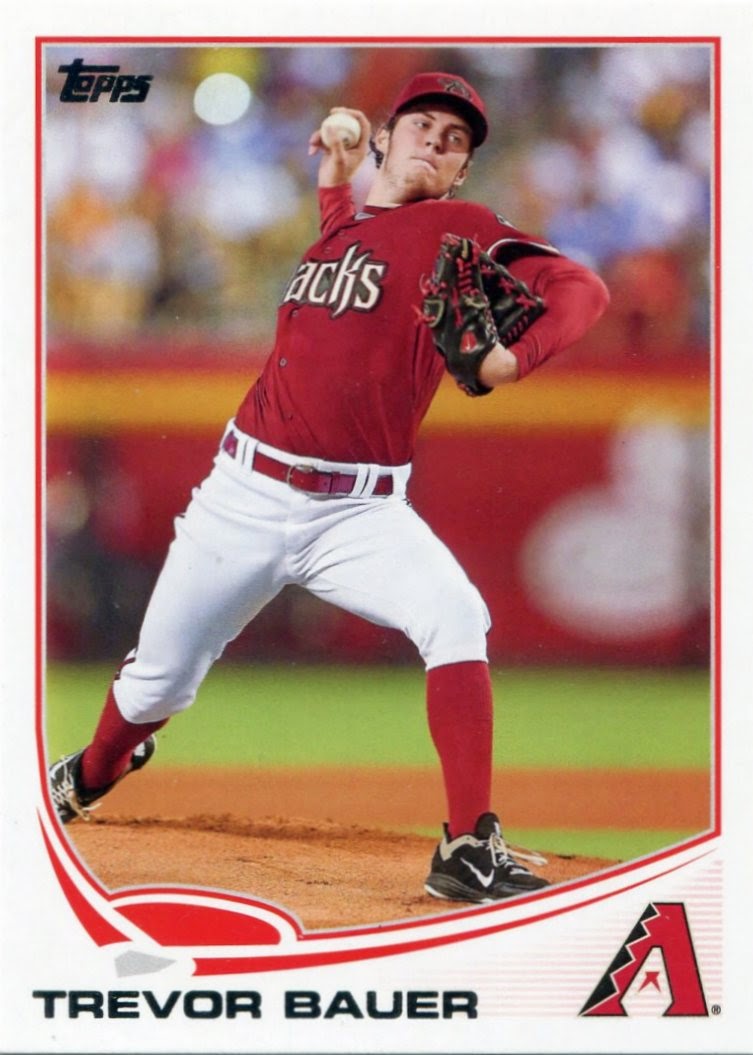 Despite being hailed as a top prospect, the Diamondbacks dealt Bauer to the Indians after just four games, going 1-2 with a 6.06 ERA in those four contests. Bauer hasn't really found his stride yet in Cleveland, but I still think there's something there.

If you're the fantasy baseball type, he might be a sleeper pick in 2015. 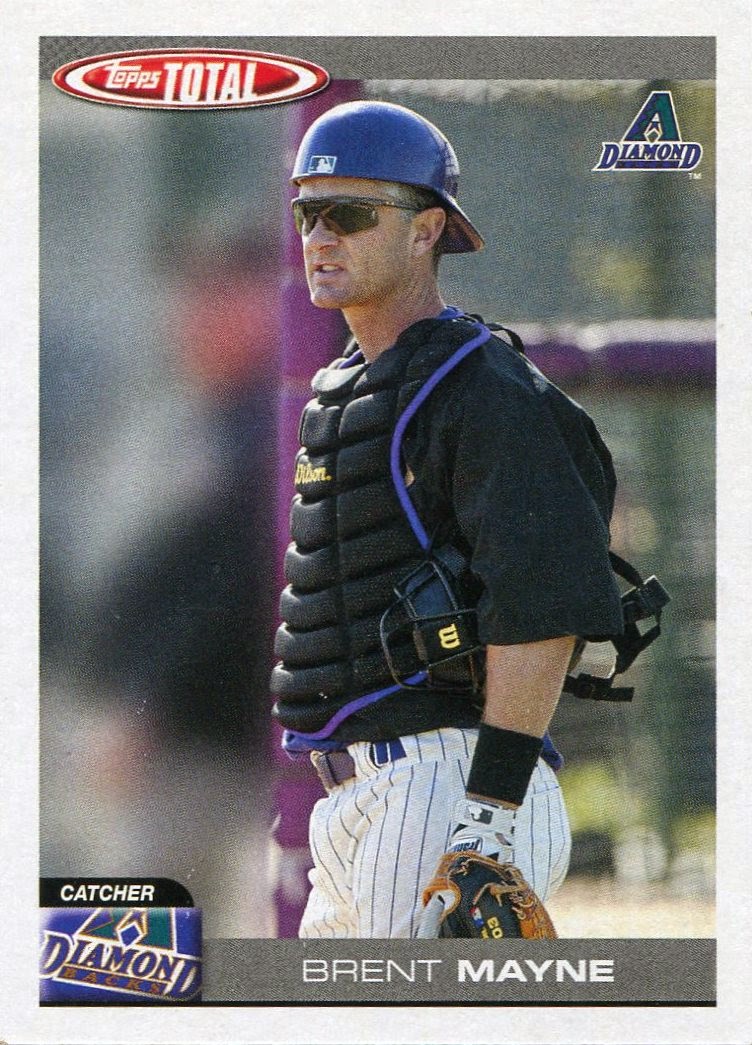 Brent Mayne wasn't on many people's radar in 2004.

I guess that's why every brand ignored him that year. Every brand except Topps Total, that is. Like Mr. Mayne here, I have Total to thank for my cards of a lot of these "Short Term Stops" nominees.

Mayne hit .255 in 36 games for the Diamondbacks before being sent to the Dodgers (with Steve Finley) at the 2004 Trade Deadline.

Had Topps Total not been around, such a seemingly insignificant stint would've been lost to cardboard history. 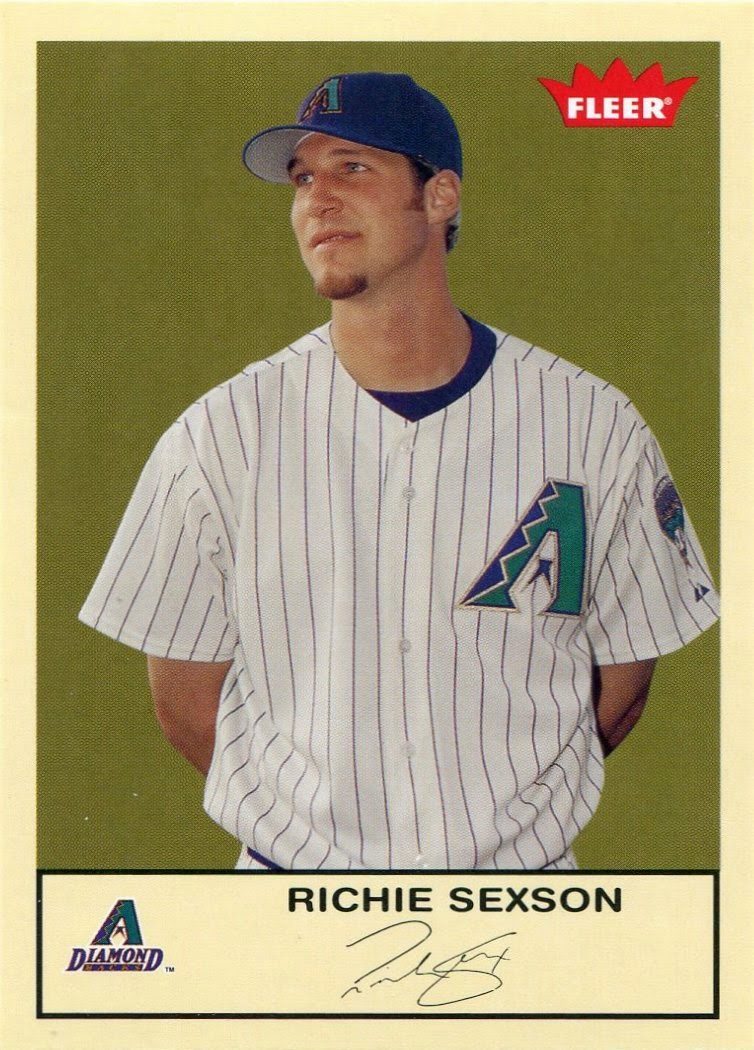 Richie Sexson's lone season in Arizona was cut short by a shoulder injury.

He did club nine of his 306 career dingers as a Diamondback (including one absolutely mammoth shot), but his time in the desert is all but forgotten now.

Heck, I hadn't hought about Richie Sexson in ages until I started writing this post. 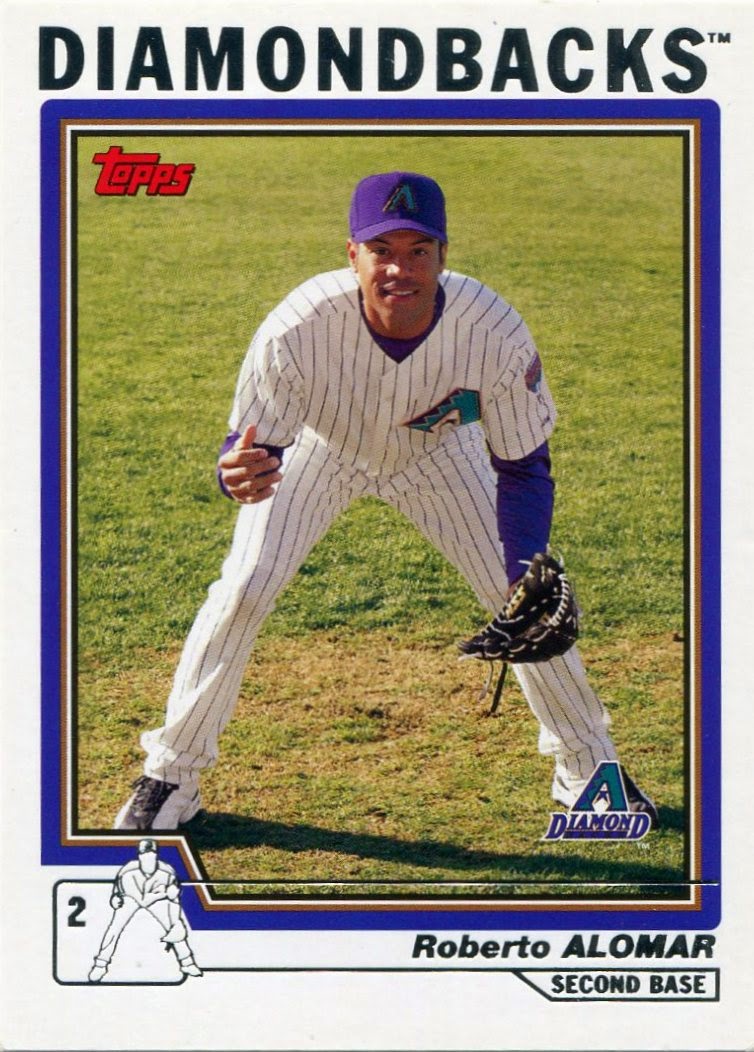 Remember what I said about expansion teams and over-the-hill players?

Roberto Alomar is a nice example. Robbie was actually a solid role player for the 2004 Diamondbacks (he hit .309 in 38 games), but Arizona soon dealt him to the White Sox for a Player to Be Named Later. He'd play 18 games on the South Side before calling it a career. Though 2004 was Alomar's sunset season, this isn't his sunset card.

As if the sight of Alomar in a Diamondbacks uniform wasn't strange enough, he had a fabled zero-year issue with the Devil Rays in 2005 Flagship. 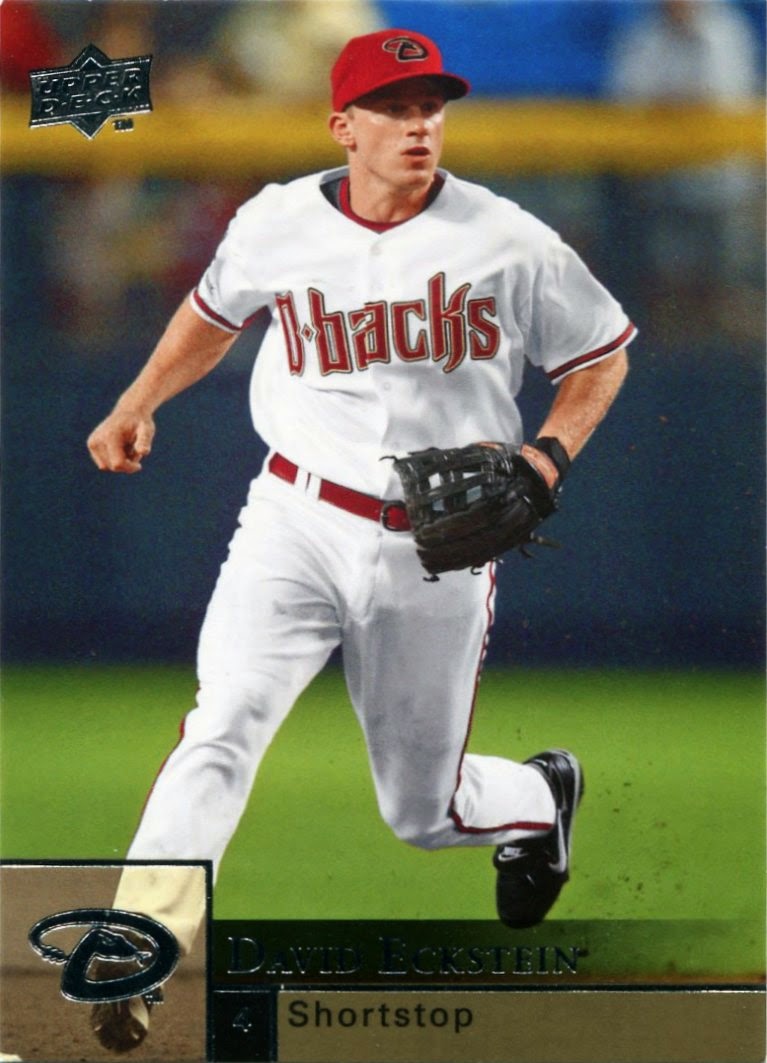 If I had to make such a list, David Eckstein is probably one of my five favorite players from my lifetime of watching baseball.

Everything pointed against him being a big league ballplayer. He was only 5'6". He was a walk-on as a freshman in college. He didn't have a great arm. He was drafted in the 19th round of the 1997 MLB draft.

But, doggone it, the guy wound up being one heck of a big leaguer. And he wasn't just good for his size. He was good, period.

Sadly, Eckstein's career was already tailing off by the time he wound up being sent to Arizona from the Blue Jays in an August 31st, 2008 trade. He hit .219 in 18 games with the Diamondbacks before becoming a free agent at the season's end.

Baseball is a better game with guys like Eckstein in the bigs. I don't have a lot to say about Melvin Mora.

The guy had a few solid years in Baltimore before winding up with the Diamondbacks in 2011, hitting just .228 in what would turn out to be his final season. It's a shame Topps couldn't have sent him off with a better card.

Perhaps one where he doesn't look like a bug on a windshield. 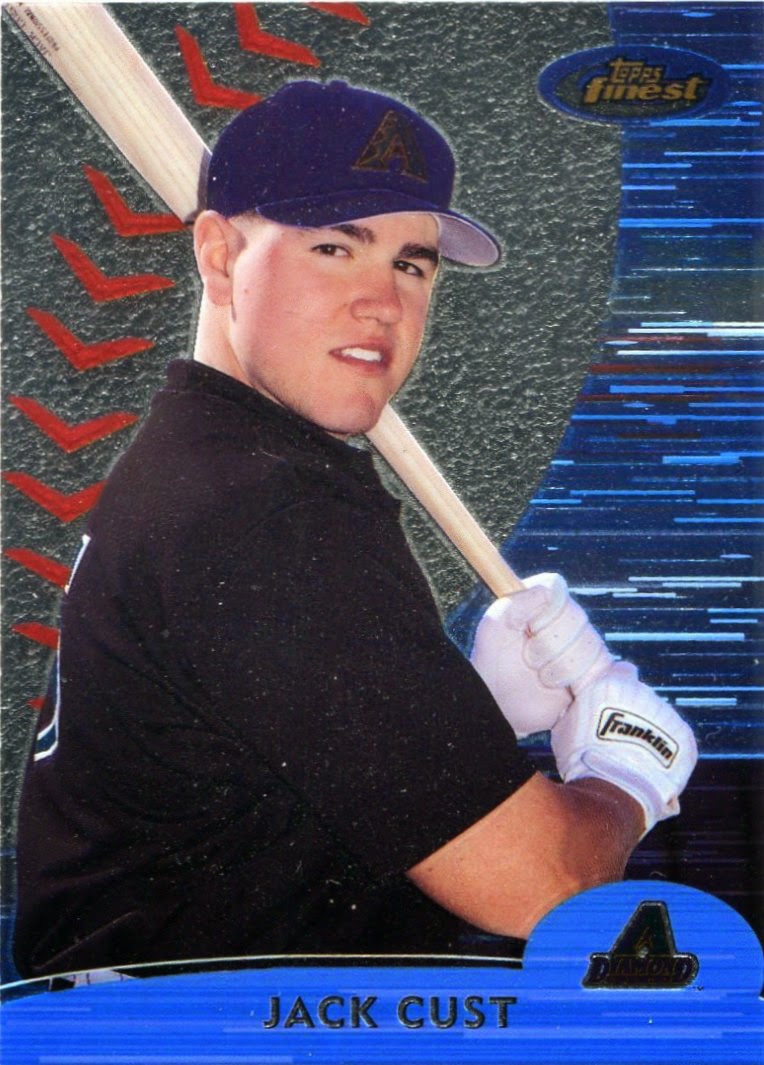 Jack Cust was the first-ever amateur draft pick by the Diamondbacks, taken in the first round (30th overall) by Arizona in 1997.

The expectations for the young outfielder were through the roof. The first sentence on the back of this very card reads..."Scouts watch Jack Cust and think 'Frank Thomas'."

Until he came out of nowhere to have a few good years with the A's in the late 2000s, Cust was seen as a bust. After just three games in Arizona, (and a .500 batting average), the Diamondbacks dealt him to the Rockies.

This is actually one of 27 cards I own of Cust with the Diamondbacks, which means that I own nine cards for every game he actually played in Arizona.

That has to be some kind of record. 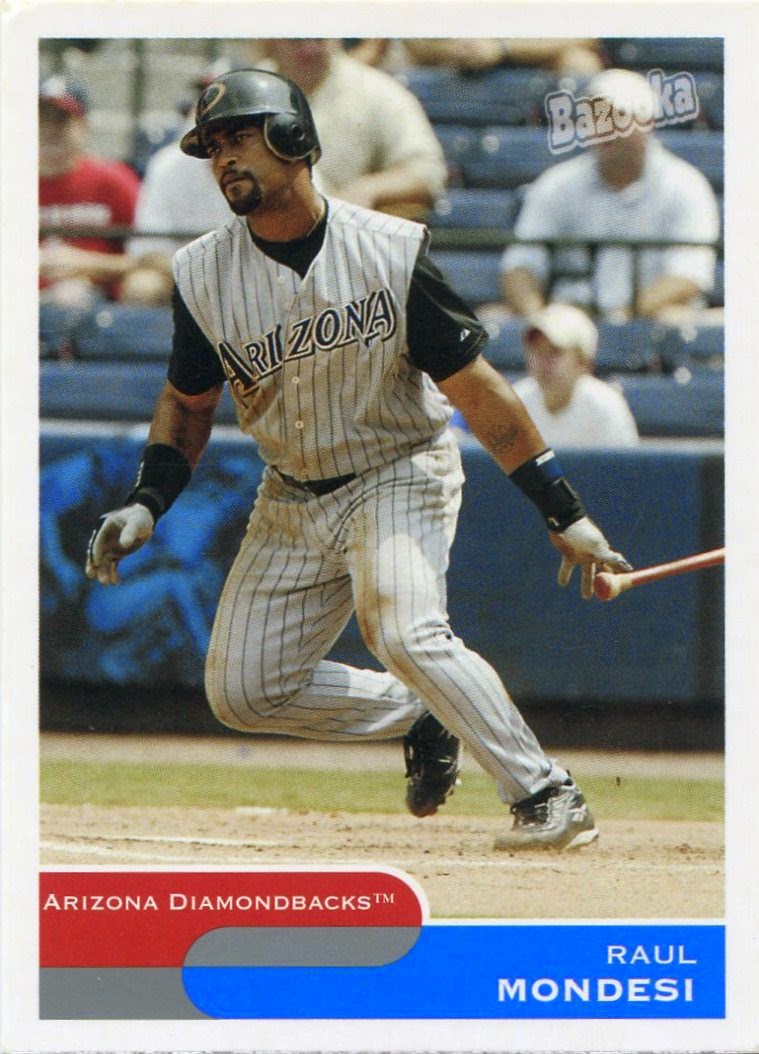 It's hard to imagine Raul Mondesi as anything but a Dodger.

But what we might forget is that he was also a Blue Jay, a Yankee, a Pirate, an Angel, a Brave, and, yes, a Diamondback. He spent part of the 2003 season in Arizona after a July trade from the Bronx, hitting .302 in 45 games in the desert.

But, yeah, he'll always be a Dodger. 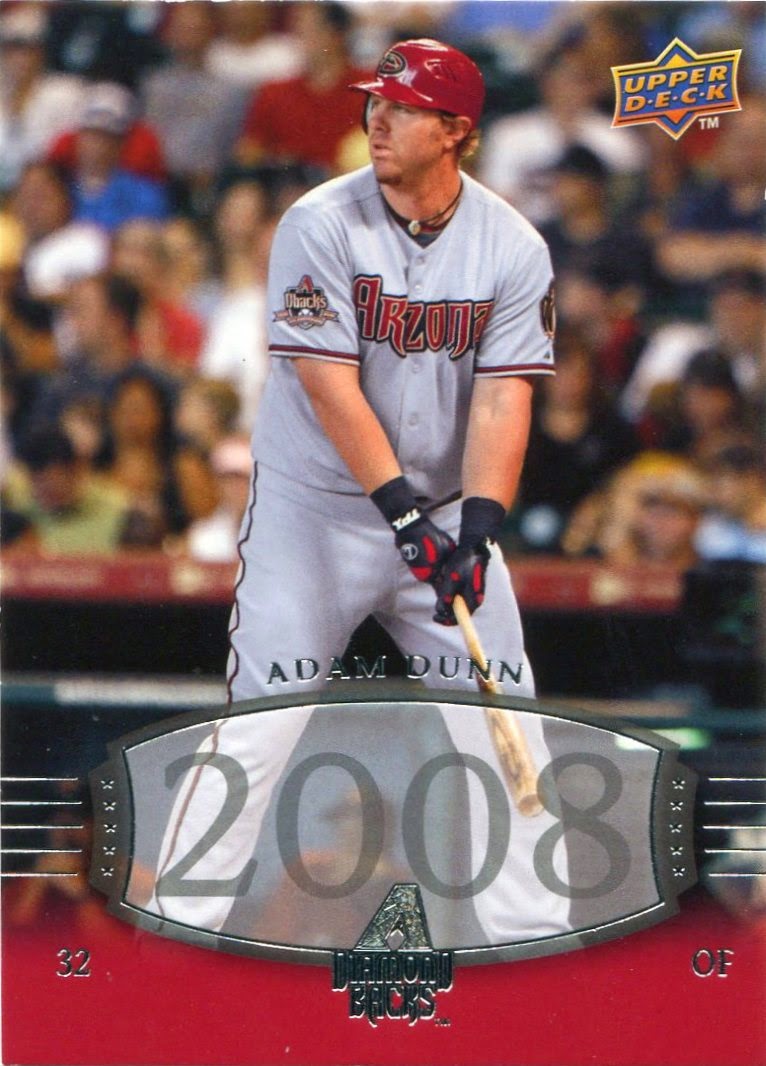 After seven-plus years in Cincinnati, "Big Donkey" was dealt to the Diamondbacks in August of 2008. He'd hit eight of his 462 homers during his often-forgotten stint in Arizona.

Dunn called it quits after a short stay with the A's at the end of the 2014 season. I'm sure many fans remember him as a Red. Some others (myself included) think of him with the White Sox. And I'll bet there's a few who remember his days with the Nationals best.

But I doubt anyone will ever equate Adam Dunn with the Diamondbacks.

That does it for this edition of "Short Term Stops."

Thanks for tuning in.
Posted by Nick at 6:00 PM

Of all your features -- and all of them are really great -- this is definitely my favorite. As I was scrolling down and reading I was thinking to myself, "Oh that's a great one; I didn't know he played there." And the next card topped the previous almost every time. Especially dig the Brent Mayne card!

This post may be the only thing related to the DBacks I like. The crap they've pulled the last few years have easily made them my most disliked team. Add in the uniforms that look like the desert threw up on a jersey, and they're comfortably in first place.

I wouldn't have guessed you could make a team like this out of the Diamondbacks. Fun post!

That Mulholland card is like a primer in D-Back logos... Snakehead logo on his BP cap, "D" logo on his BP jersey, "A" logo in foil on the card itself...

Even I didn't remember Terry Mullholland's 3 innings pitched for the D-Backs. Great post!

I love it when you do these posts

I'm no fan of the D-backs either. The stunts they and their fans have pulled over the years seem to be getting worse, not better.

Weird to see Mora on this post. I remember he spent a year as a Rockie, but I thought that was much more recent than 2010.

That's Mora's game face. Whenever he was up to bat, he looked like he just ate something bad. Even the commentators noticed on one occasion I remember...