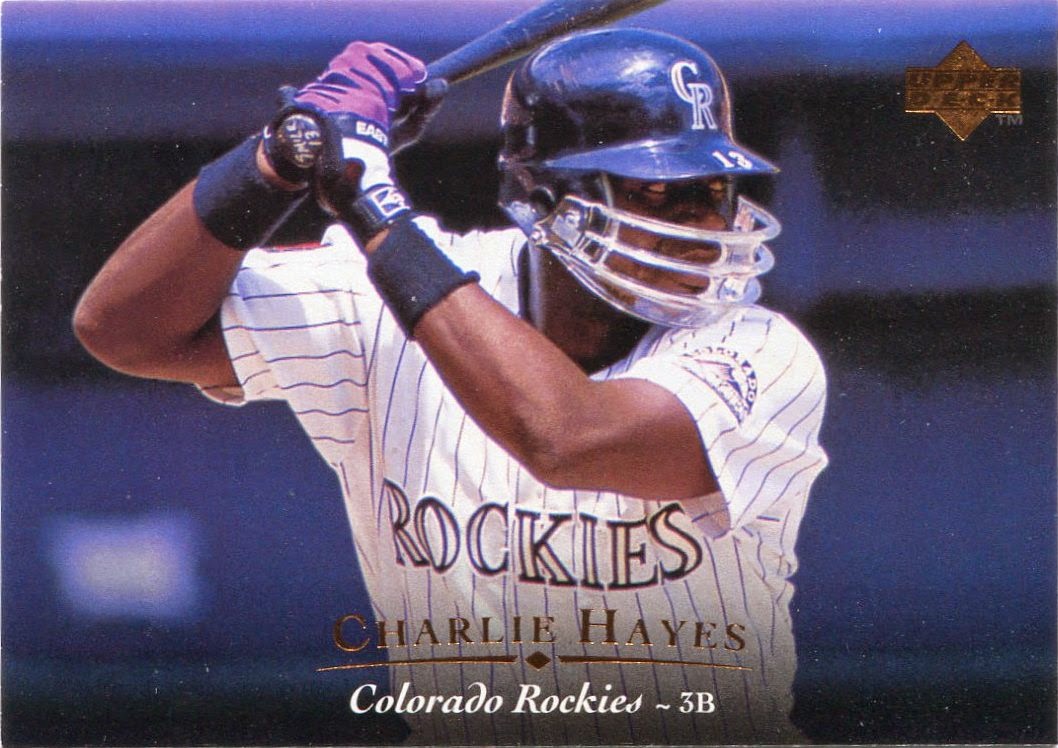 I'm here to tell you that a "card coma" is a perfectly legit medical excuse.

It's a shame that most employers/college teachers still don't recognize it. I tried to use my card coma to get off of school this week, but nobody bought it.

Come on, people. After hours of buying, sorting, and filing Sunday's card show finds, how can I be expected to perform any other daily duties? (That doesn't even mention the mega-Just Commons order I received last Saturday, which I'll be featuring on the blog next week.)

Still, after plowing through a coma-induced week of school, I'm starting to come out of it. It's time to move on from Sunday's show and do other things. Things like, say, featuring more great cards I've received from fellow bloggers. (It feels like ages since I've done a trade post.)

The excitement of posting about another terrific batch of cardboard I received from Weston of "Fantastic Catch" has started to pull me out of my card coma today.

Facemask shots are usually good for that. 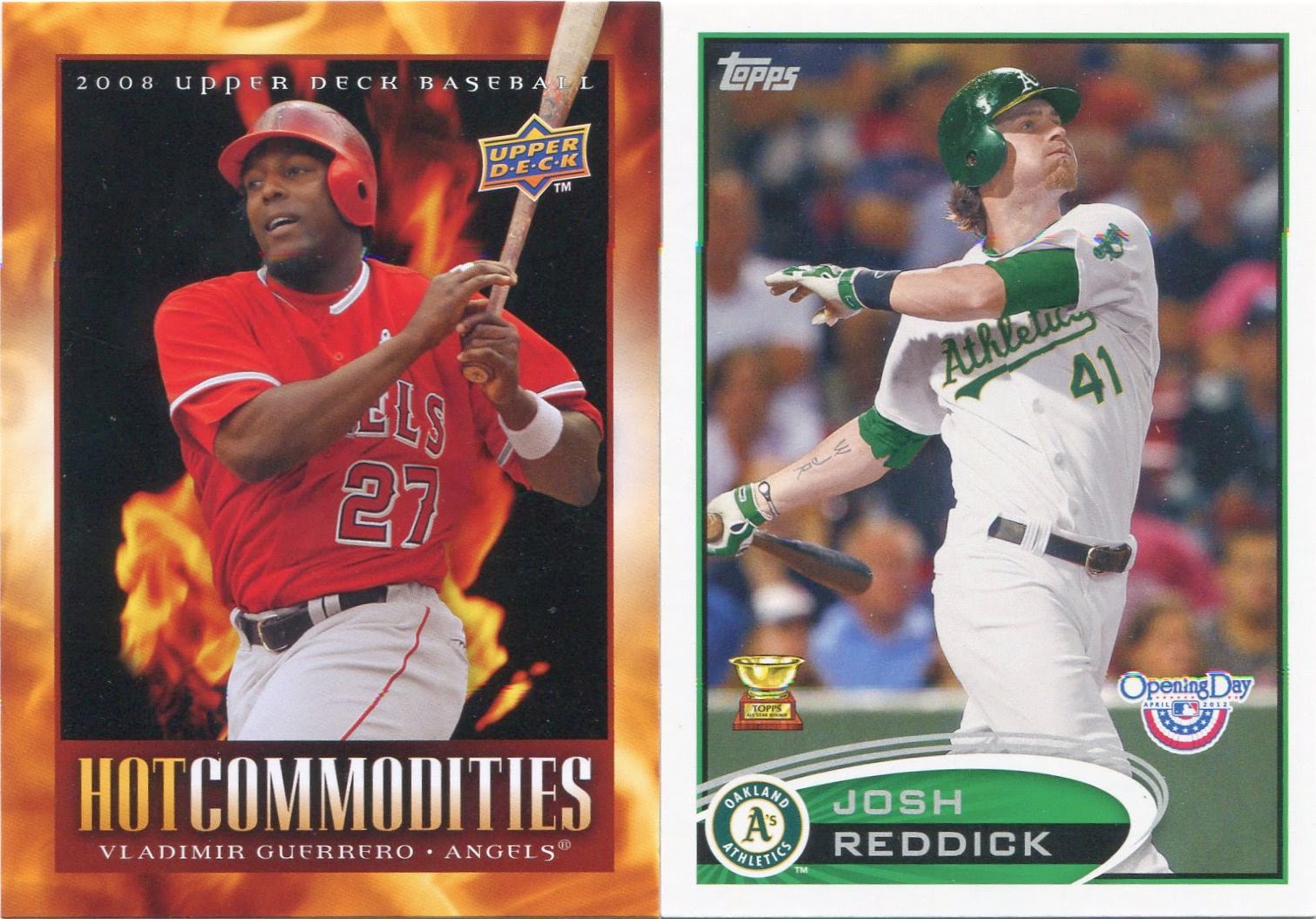 There were player collection hits abound in this trade package.

At this point, I'm not sure what else I can say about my appreciation of Vladimir Guerrero and Josh Reddick. I've covered about every possible angle already. I'm tapped out.

But that doesn't mean I don't appreciate all the Vlad and Reddick cards people send me. 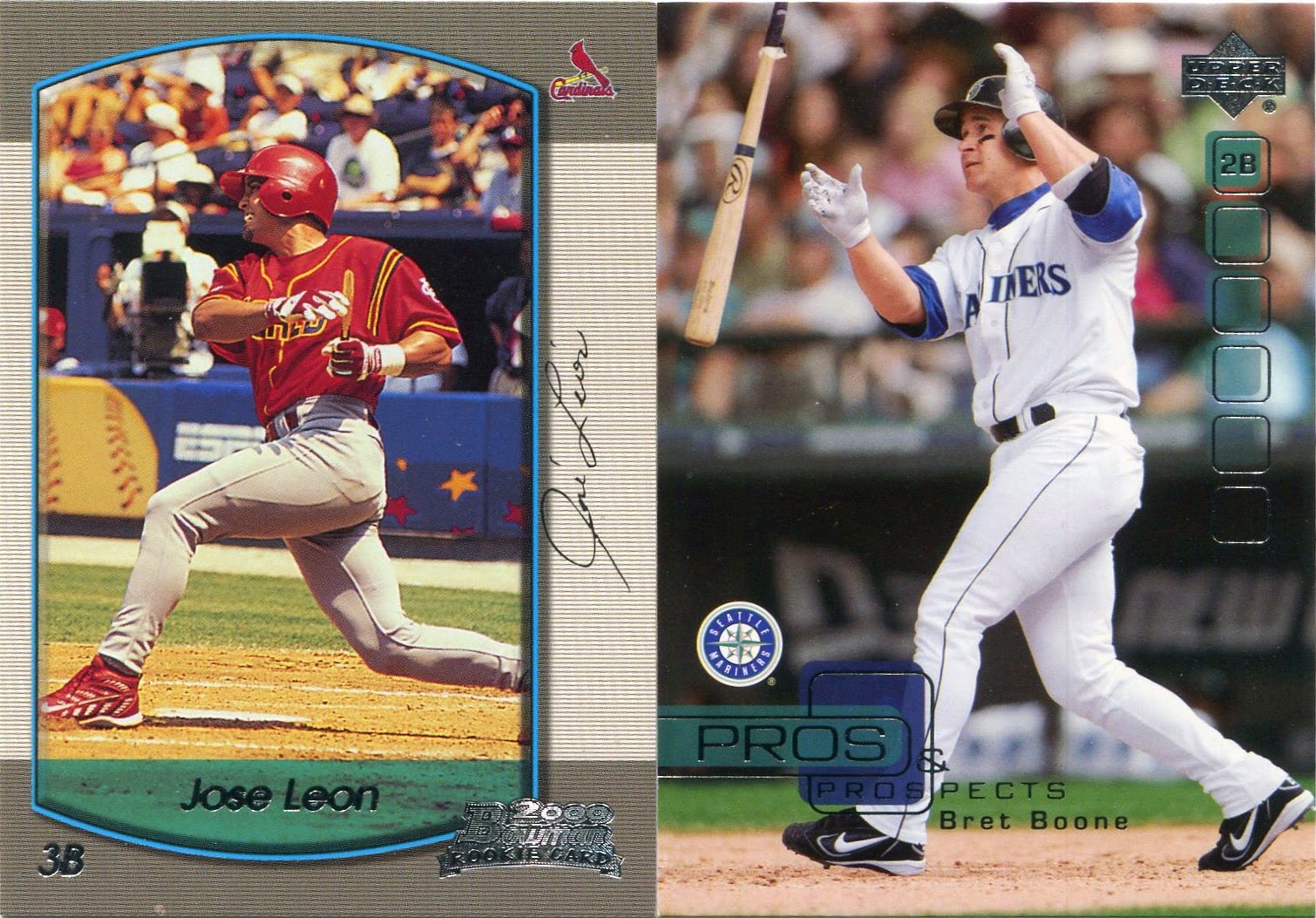 Weston has dropped quite a few trade packages on me in the past.

One thing I love about the stacks he puts together is the fact that he included a lot of cards from long-forgotten sets, like these two bat-themed singles. 2000 Bowman Draft? 2005 UD Pros and Prospects?

Without Weston, I wouldn't have had a prayer of finding these two cards here in 2015. 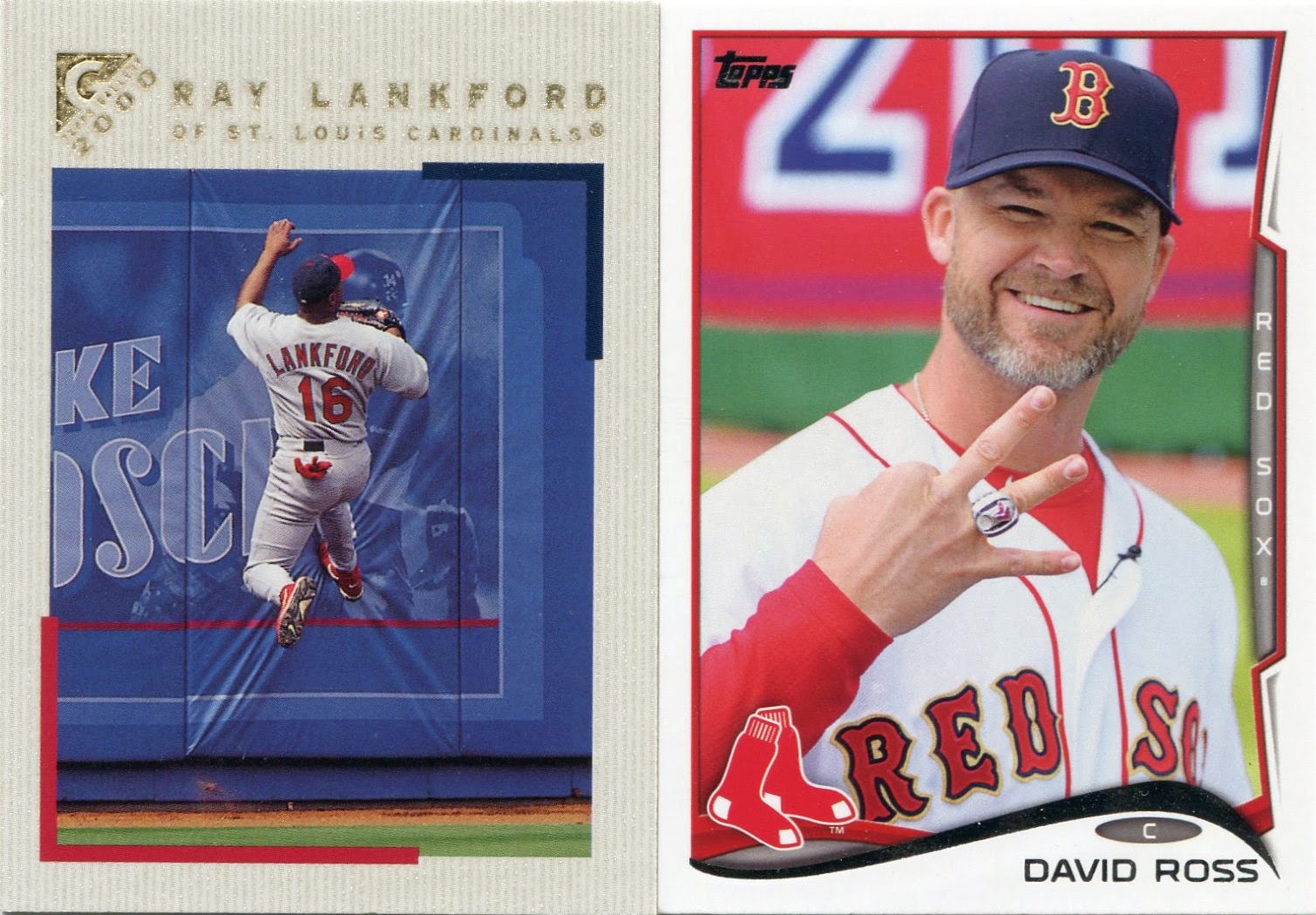 I'm torn on how to feel about that Lankford.

I'm Mike Scioscia fan and all, but it is kind of funny to see someone running up his face on the Dodger Stadium outfield wall.

At first, I thought the Ross was some kind of photo variation short-print. Turns out that it's just Ross's standard base card from last year's Topps Update.

See, not all the quirky shots have to be limited to photo variations. 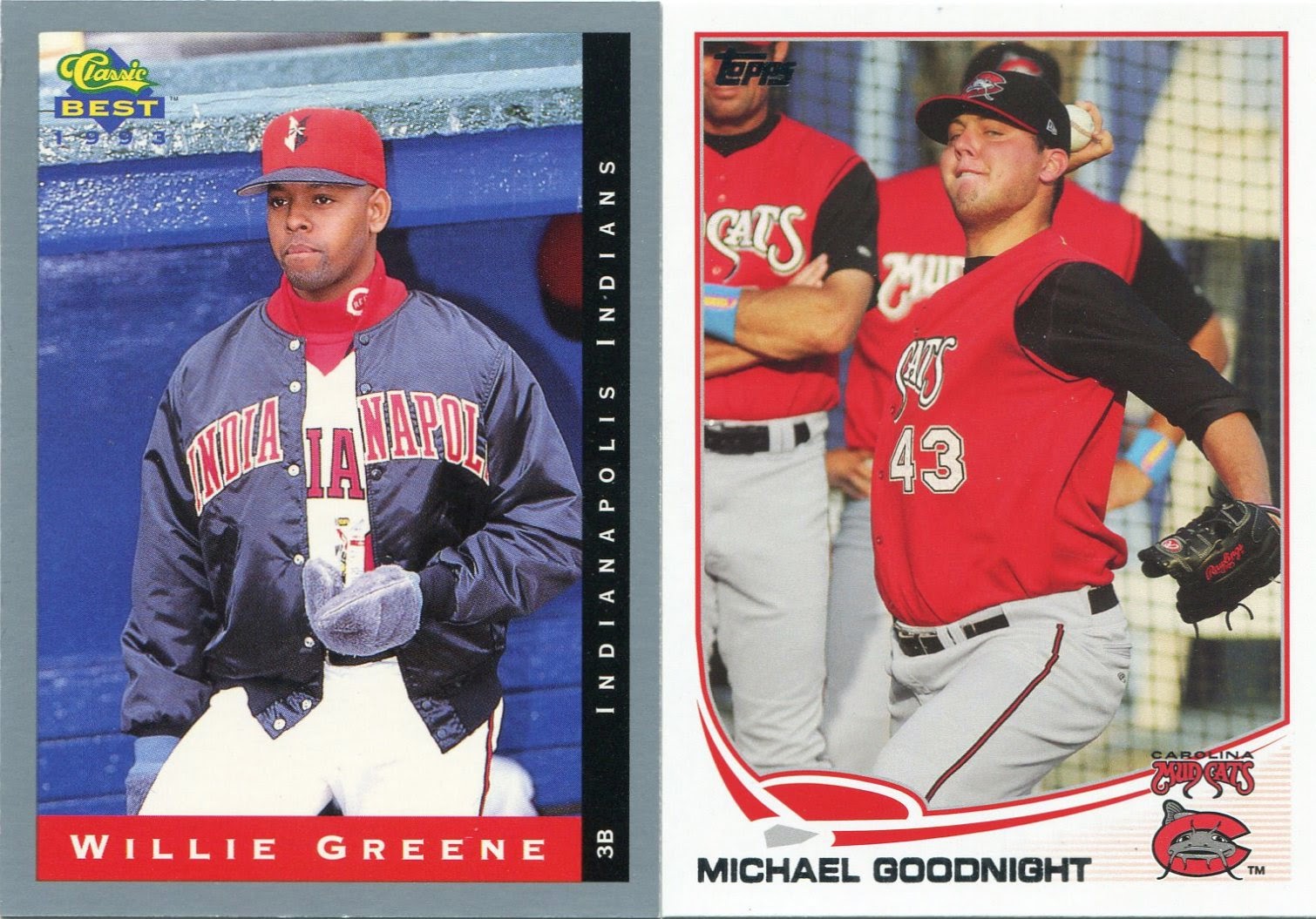 If you want quirky, look no further than minor league cards.

Willie Greene isn't about to let the chilling cold stand in the way of his pack of sunflower seeds. A name like Michael Goodnight (yes, he's a pitcher) is the catch phrase-crazed announcer's dream. I can hear it now.

It's too bad the guy was completely out of baseball last year.

With a name like that, he seemed destined for the big time. 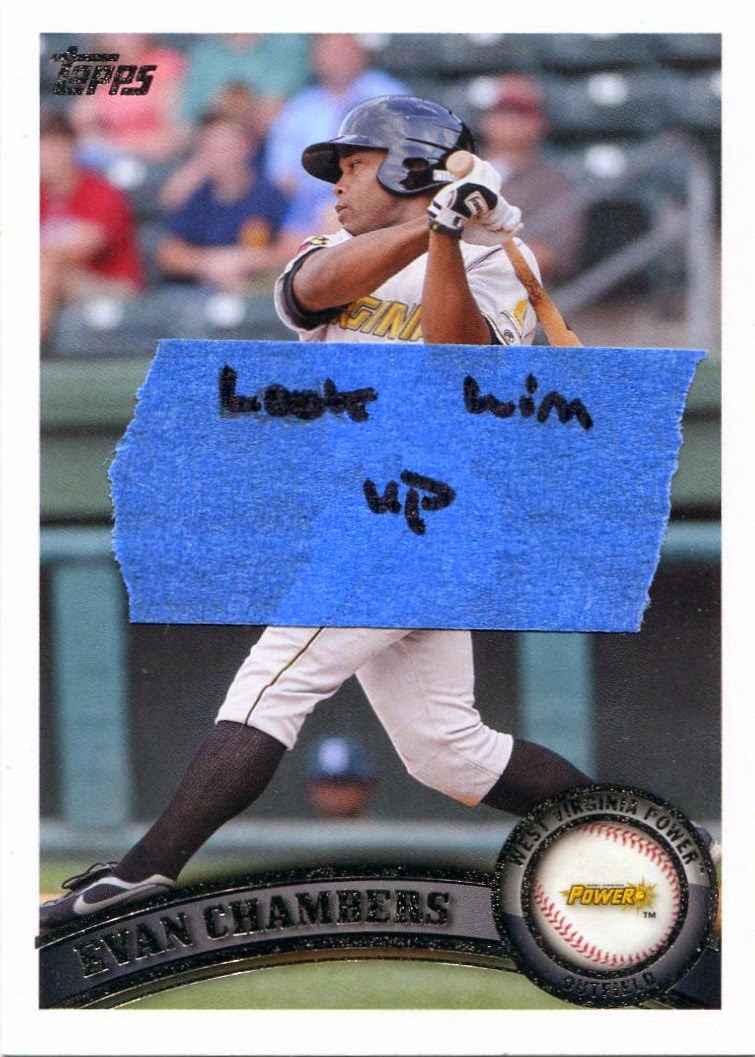 When someone specifically attaches a note that says "Look him up," I look the guy up.

I'm both glad and sad that I did, because I otherwise wouldn't have known about the tragic story of Evan Chambers.

Chambers was a third-round pick by the Pirates in 2009. Sadly, after a few years in the minors, he passed away in his sleep at the age of 24 in December 2013.

I feel honored to own a card of the guy. 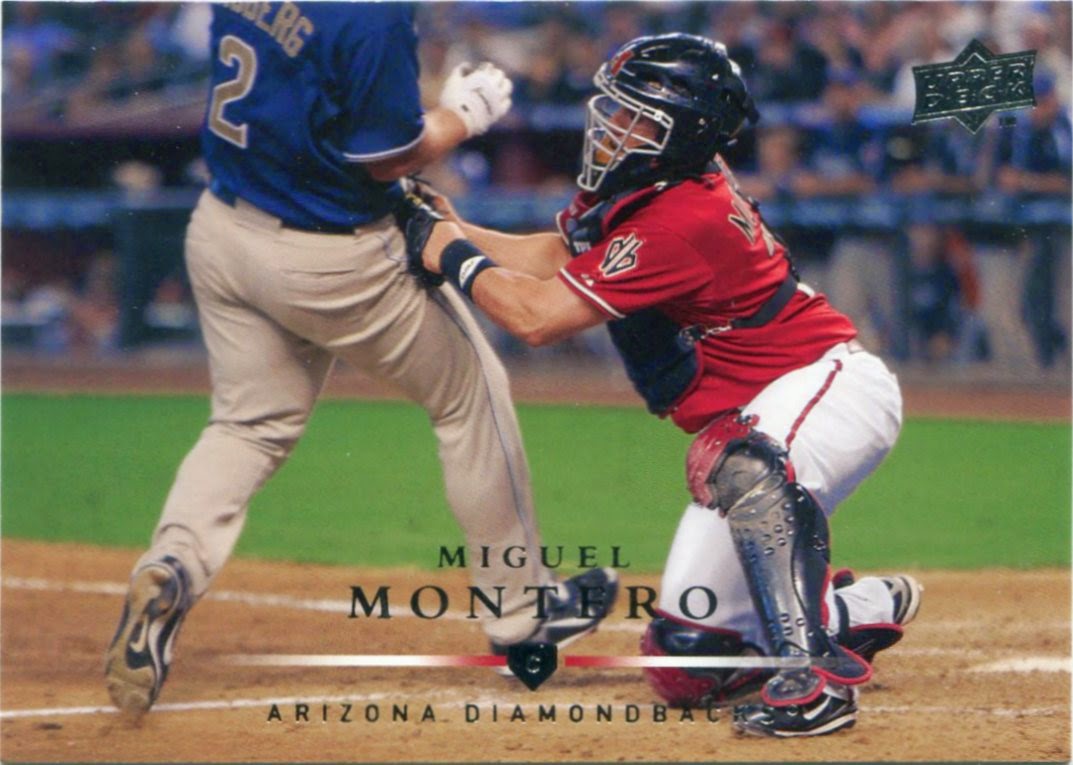 Sorry to get all somber on you there in a simple trade post.

But I know mini-collections are always good for a pick-me-up. Weston threw quite a few of those into this trade package.

We start with this play at the plate of Miguel Montero, one of the newest Cubs. I'm actually more intrigued by the Morgan Ensberg cameo here (the subject of one of my oldest player collections), since the former third baseman never had an official card released during his days with the Padres.

I guess I'll have to settle for this. 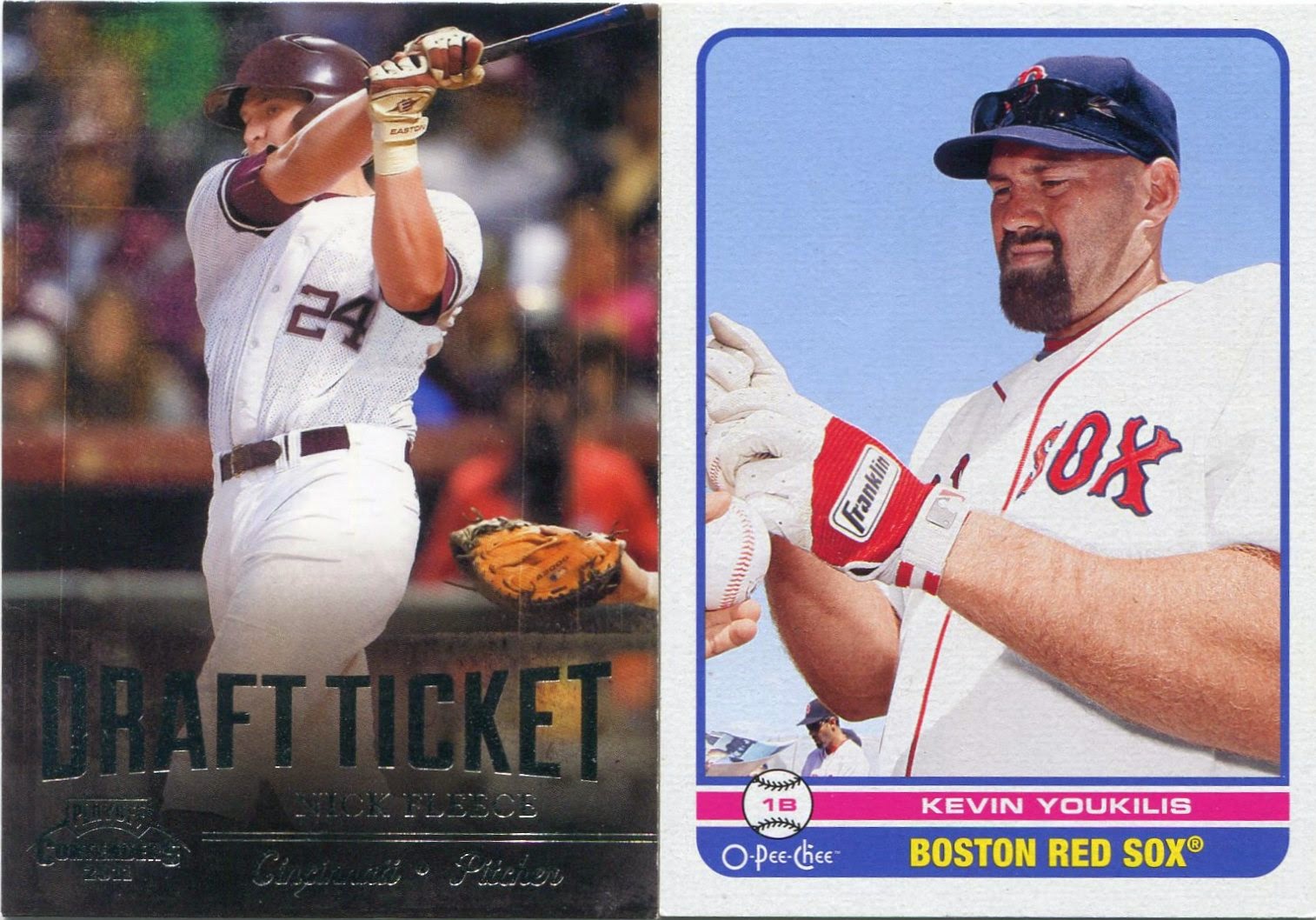 More from the mini-collection archives.

I'm pretty sure the card on the left is my first-ever "college pitcher at the plate" shot. 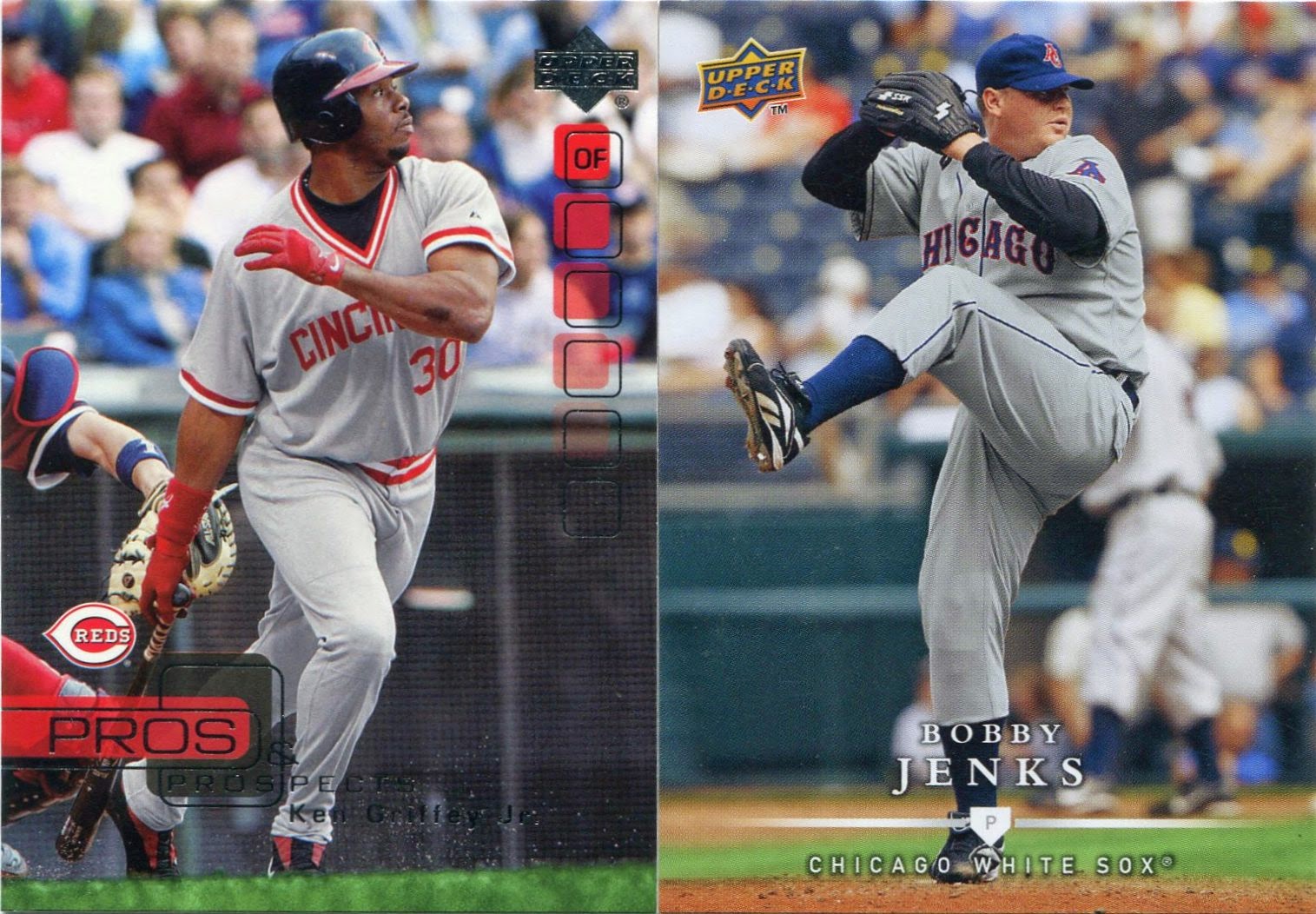 I'm not one to play favorites, but I think throwbacks are right near the top of the list with my mini-collections.

I love when people find new retro jerseys to send me. Especially ones of greats like Griffey and hometown heroes like Bobby Jenks.

Jenks even has the portly physique of a lot of pre-war ballplayers. 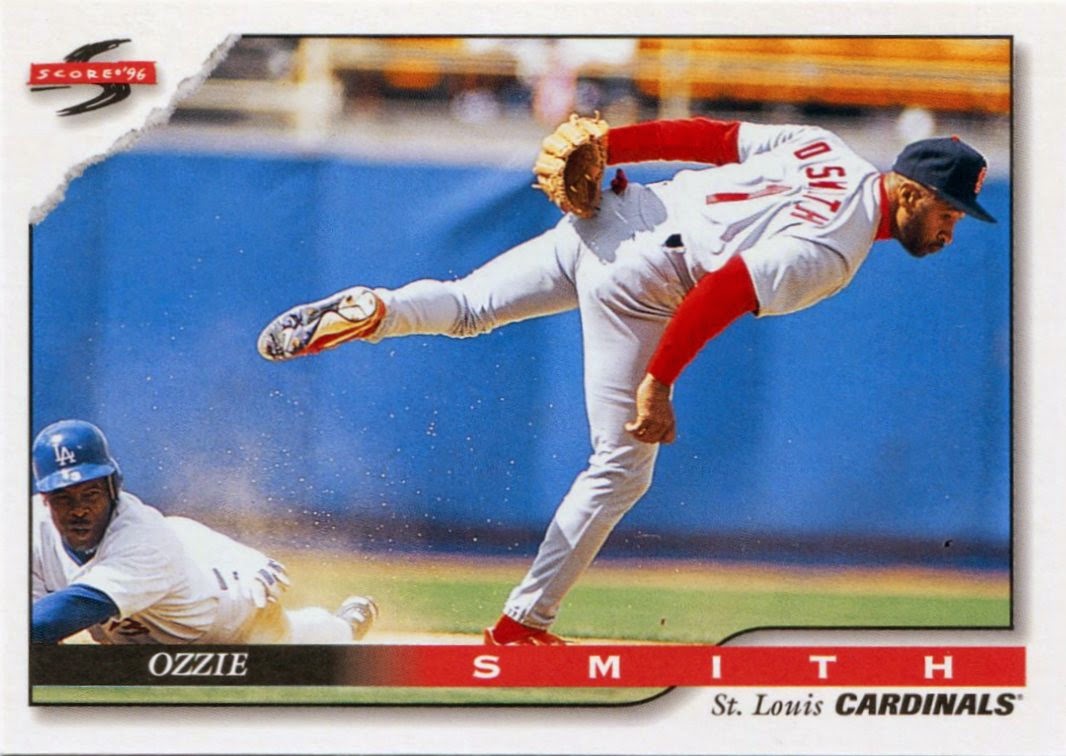 Since Weston is a big Cardinals fan, I guess it's fitting that we'd close with The Wizard.

This double dip is one of the finest Ozzie Smith cards I've seen, and we even get Dodger Stadium in the backdrop as a bonus.

I can feel the card coma slipping away already. But it wasn't looking good for most of the week, I'll tell you.

Next time you feel a little overwhelmed by the amount of cards on your sorting table, just tell your boss you're feeling a card coma coming on. It's a perfectly reasonable excuse.

I actually got to meet Mr. Goodnight in person back in 2013. Unfortunately he had been demoted to that level so the walls were starting to crash down on him.

I'm glad you enjoyed the cards so much. It's always my pleasure to send you these packages and get you out of your coma.

Great trade package! I now have three new horizontal cards to add to my want list. That Montero PATP is especially awesome!

I think that's the best Griffey throwback uniform card ever made