It's got it all 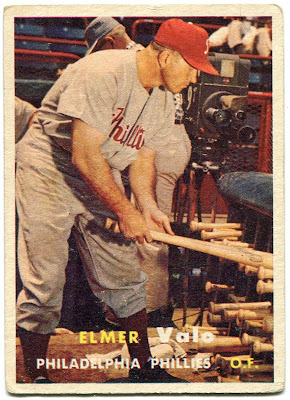 I love this card.

I really, really love this card.

It's vintage, after all, and who doesn't like vintage? Especially 1950's vintage!

The fact that it's an older card is awesome, but there's a different reason why this card is so great.

It's just pure "baseball". In no other sport could you take a picture with as much mystique and elegance as this one has.

You've got journeyman outfielder Elmer Valo hovering near the bat rack, carefully selecting a couple pieces of lumber that are to his liking. You've got the old-timey TV camera behind the rack, along with the cameraman behind Valo. The cameraman looks to be pondering over the day's work ahead of him. And then you've got a fan just relaxing in the background (top-right), his feet settled onto the seat in front of him, presumably waiting for a great day of baseball ahead of him.

Not only that, but this card has a couple good stories attached to it.

The reason I even collect Elmer Valo in the first place is that I once read that he was one of the few major-league players to be born in (then) Czechoslovakia. I'm not sure on the exact number of Czechs to play in the big leagues, but it can't be many.

Valo was a surprisingly good hitter in his career. While he was a bench player for a large part of his career, he still managed to post a career .282 batting average, coupled with a fantastic career on-base percentage of .398.

I purchased this card at a card show this past November. After going through all the tables, I still had about 25 bucks left in my pocket. My dad said he saw a box of '50s and '60s vintage cards at two bucks a piece when he was walking around. I don't usually like to look at too many tables that have cards priced at more than a dollar because they eat up a lot of my budget. If I would've bought 20 cards from the $2 box early on, poof...there goes a third of my budget at one table. And the card show is absolutely huge, so you don't want to spend too much too early.

But since I was already done looking through all the dime boxes and whatnot, I figured "what the heck". How else could I better spend 25 bucks than on some '50s and '60s baseball cards?

I picked out a few too many cards on my $25 budget and had to put a few back (a painful feeling for any collector, I'm sure). I got it down to about 14 cards until it would've really pained me to put the remaining ones back. The Valo card was next on the "put back" list. Thankfully, the vendor cut me a deal and let me have the fourteen $2 cards for the $25 I had, which meant that the Valo was coming home with me.

I am eternally grateful.

This card's vintage. It's got one of the best pictures I've ever seen on a baseball card. It's one of those kind-of obscure guys that I really enjoy collecting. And it's got a great story attached to it.

Definitely a nice card and cool story to go with it. Nice that your dad and you go to the card shows together