Last year, my family made one of the best decisions ever.

We got the MLB Network.

It's the default channel around here nowadays. I'll watch other programs sometimes (I've got the Blackhawks game on right now), but I'd say about 80 percent of my TV time is spent watching the MLB Network.

Before we got it, ESPN was my main source of sports information. I have a lot of gripes with that channel. I think there's a secret law around there that says they have to mention the name "LeBron James" at least once or twice during every show. And I'm not sure that ESPN even knows baseball still exists.

The only time I watch ESPN anymore is to catch "Pardon the Interruption".

PTI can't get enough of the Jeremy Lin saga. Apparently, he's tearing up the NBA right now. I don't follow basketball, but it's a great story from what I've heard. (I promise this post will tie into baseball, don't worry.)

As they've mentioned on PTI, the NBA is quite predictable. You know most of the teams that will be there in the postseason, and the former college stars are usually the ones that dominate. There isn't much of the "underdog" factor.

That's why I like Lin so much. Former Harvard graduate gets waived by a couple teams, then comes out of nowhere to turn the lackluster Knicks into a force to be reckoned with.

But as great as the story is, I can't help but think that this guy will flame out within a month or so. Maybe I'm just cynical when it comes to the NBA.

I'm sure there's a few other examples out there relating to baseball, but whenever I think of Lin, I think of this guy: 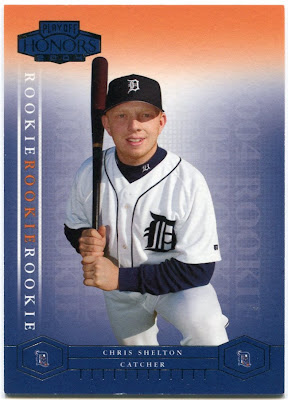 Remember him? Does the name ring a bell?

While I haven't done the research on Jeremy Lin's cards, I'm sure they're going for obnoxious prices right now.

Shelton hit nine homers in the first 13 games of the 2006 season, and everyone went nuts. I remember it vividly.

I specifically remember his cards skyrocketing in value. The card you see above is one of Shelton's rookie cards, numbered to 1,999 copies.

I can't be sure, but I bet this one was trading hands for about twenty bucks at the height of "Shelton-mania".

Well, it turns out that he wasn't the next "big thing". 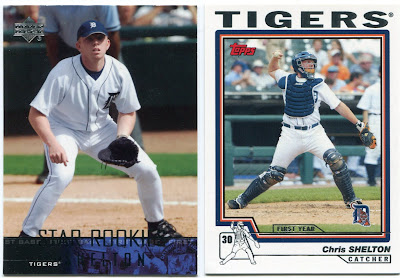 Here's a couple more of my Shelton rookies, which I'm sure were garnering a few bucks a piece in early 2006.

Shelton really struggled after his amazing start. And all those guys that bought his rookie cards for ten bucks a piece were left sobbing over now-worthless cards.

By the end of July of that very same season, he was sent back down to Triple-A. 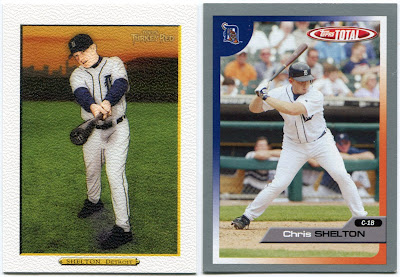 Shelton was traded to the Rangers in 2007.

The last time Shelton played in the majors was during a brief nine-game stint with Seattle in '09.

He's been cut from a few rosters since and is currently a free agent.

Where did I find all the cards I've featured in this post? You guessed it. Dime boxes. I couldn't have dreamed of that happening for a brief period of time.

I bet I'm the only guy still out there who actually collects Chris Shelton cards. But he's an interesting footnote in baseball history, and he fits right in with the kind of obscure guys I enjoy getting cards of.

If I'm right and Lin fades back into obscurity, I won't feel sorry for the collectors who are dropping hundreds of dollars on his cards right now.

But I wish the best for Jeremy Lin. I really do.

Hopefully he won't turn into the next Chris Shelton.
Posted by Nick at 8:01 PM

I remember him and the hype. I finally pulled one of his cards after he cooled down ! Now I'd like to pull a Lin to sell, but I don't do basketball much.

So you don't follow the NBA, have issues with ESPN, only watch it when PTI is on, and think Lin is going to fade away eventually.

Are you my son?

Occasionally I'll watch "Around the Horn", but they usually just talk about the same stuff, so I just wait for PTI.

I have to admit that I've actually watched two whole NBA games this year (the first ones I've watched in about five years or so), only because I was with my friends each time. I have to keep up with them somehow.

ESPN is required by law to mention: Boston Red Sox, New York Yankees, Brett Favre and LeBron James in a cycle every hour on the hour. I hate them. NBA couldn't market their way out of a paper bag. Haha. Cynical? Me? NEVER!!

PTI is great, and I don't mind ESPN - but I echo your sentiments. MLB network is awesome! Baseball IQ is the best show EVER.