The Glory of Their Time, Chapter 13: Tom Gorzelanny

In terms of baseball, or just professional sports in general, I'm sure that most of us have a "local hero".

It doesn't have to be a big superstar; the fact that someone from around your town actually played in the highest level of sports is enough.

My "local hero" is Tom Gorzelanny. The fact that he's turned into a respectable big-league pitcher just adds to how much I like him. 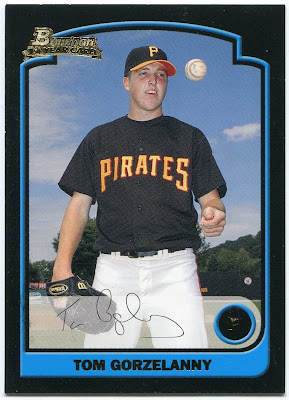 2003 Bowman Draft #BDP45 Tom Gorzelanny RC
Gorzelanny was born in Orland Park, Illinois, which is a bit of a ways away from where I live.


He attended the University of Kansas for his freshman year. He'd transfer to a Triton Community College for his sophomore year, a college which I'm sure most people have never heard of.
The reason why Gorzelanny is a "local hero" is that Triton is only about ten minutes away from my house. I know a lot of kids that go there. I've even stepped foot inside the college on a couple occasions.
To know that I'm on the same college campus that one of my favorite big-league pitchers once roamed is an amazing feeling. And the fact that Triton is actually mentioned on the back of Gorzelanny's 2003 Bowman Draft rookie card instantly makes it one of my favorites in my collection.
Gorzelanny was drafted by the White Sox out of high school in 2000, but didn't sign. After a year at Triton, the Pirates drafted him in the second round of the 2003 draft.
He'd sign with Pittsburgh, beginning his professional baseball career with low-A Williamsport in 2003. 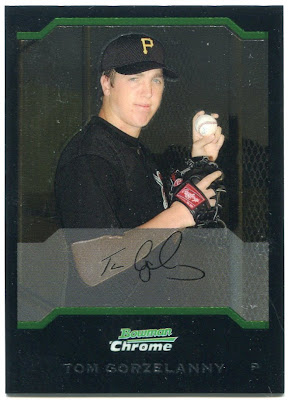 
His showing at double-A in '05 earned him a September call-up with the Pirates, making his debut on September 20 of that year.
You may have heard of another player that attended Triton College. He goes by the name of Kirby Puckett. And he's a Hall-of-Famer.
It's simply unbelievable to think that a guy like Kirby Puckett attended a college that a lot of my friends go to.
But Gorzelanny is special to me because I was in grammar school at the same time he was attending college. Gorzelanny is still a big-leaguer, and it's amazing to see him on TV, knowing that I've got a connection to him.
Who knows, maybe I saw him walking on the Triton campus one of the times we drove past it as a kid. 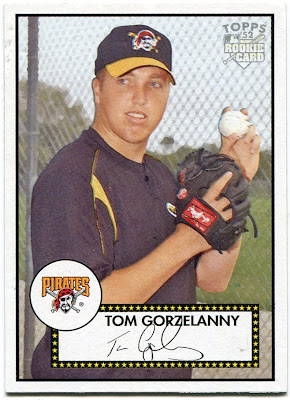 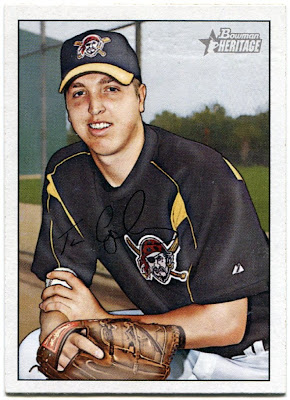 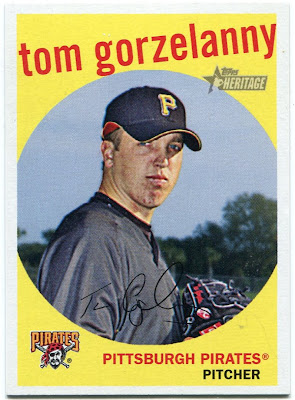 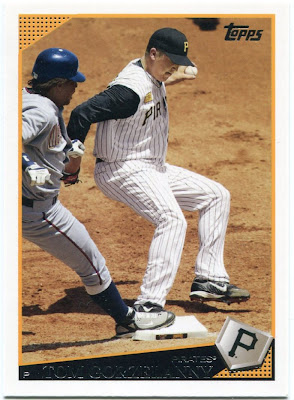 2009 Topps #109 Tom Gorzelanny
Even though he hasn't been a fantastic pitcher in recent years, Gorzelanny has been given some great action shots for his cards. His 2009 Topps issue is a prime example.


He'd be moved to the bullpen for the 2009 season, not making a single start for the Pirates that year. A finger injury limited his action, as he'd only pitch in 8 2/3 innings in the first half of '09.
At the 2009 trading deadline, Gorzelanny was dealt to... 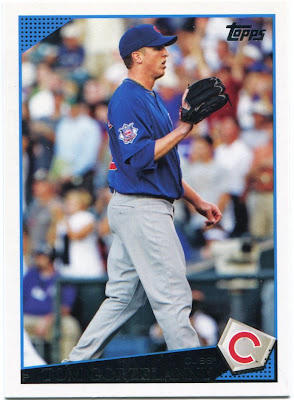 2009 Topps Update #UH35 Tom Gorzelanny
...none other than my favorite team, the Chicago Cubs.
I remember when I first heard the news. I was so excited. My local hero was actually going to play for my favorite team!
I was so excited.
Gorzelanny switched between the rotation and the bullpen during the rest of '09, going 4-2 with a 5.63 ERA in 13 games with the Cubs (with seven starts). 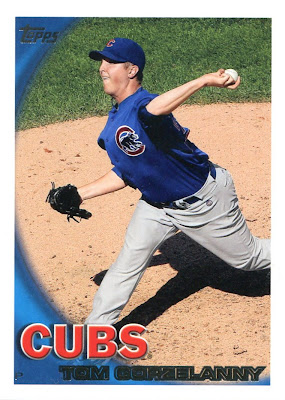 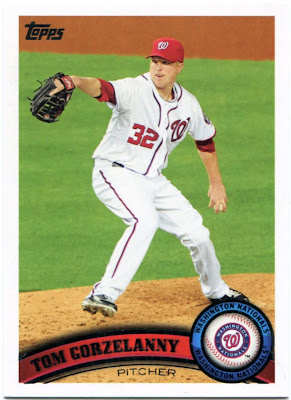 2011 Topps Update #US301 Tom Gorzelanny
The Cubs dealt Gorzelanny to the Nationals for a few minor leaguers in January of 2011.
It was sad to see him leave Chicago, but at least he went to another team I like in the Nationals.
He had an okay year in 2011, going 4-6 with a 4.03 ERA (his lowest since '07), again splitting time between the rotation and the bullpen.
I don't yet own Gorzelanny's 2012 Topps base card, but I've seen it. It's a fantastic "play at the plate" card, which will fit well with this collection of mine.
We all have our favorite players for our own reasons. I know I've got mine.
But being a "local hero" carries more meaning than just being a "favorite". It's like a special bond or connection that you feel to a major league baseball player.
With me, that player will always be Tom Gorzelanny.
Posted by Nick at 3:04 PM

I didn't know about the Chicago area connection but I liked Tom in his time with the Cubs. My wife and I affectionately called him "Beaver". Like on Seinfeld we "have a pet name for everybody." I was sorry to see him go. I was even more sorry when after the Cubs had deemed him expendable, they ran short of starting pitchers.

When I finally get my 2012 Topps sorted, I'll see if I have an extra Gorzelanny for you.

Take a close look at the photo of Tom on the 2010 Topps Update card. That's just about as clean and crisp a photo as I've ever seen on a card! Although, it helps to look at the card instead of a scan!