Dime Box Heroes: At the movies 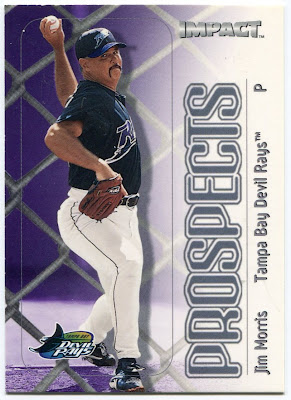 2000 Impact #17 Jim Morris PROS
I'm not much of a movie connoisseur these days.
In the past three years or so, I've only seen five movies at the theater. "Hamlet 2", "Grown Ups", "Jackass 3.0", "Captain America", and, most recently, "Moneyball".
That's it.
I didn't really even want to see "Grown Ups" or "Captain America", but I went because my friends were going. ("Captain America" actually turned out to be a decent flick.)
When I was younger, it seemed like there was a movie coming out every month that I wanted to see. The early-2000's were also the death rattle for good sports movies, at least to me anyways. The '90's had a bunch of great sports movies that were marketed towards kids. I was only one when my all-time favorite movie, "The Sandlot", was released. I was only about four or five when movies like "Rookie of the Year" or "Little Big League" came out. But I caught up with them later.
Even though I'm twenty years old, I still feel that all of those were fantastic movies.
A couple days ago, I was bored and decided to make a list of my all-time top 25 movies. I'd only seen four of them in theaters.
"The Rookie" was one of them.
Finding that "The Rookie" made the list was a surprise to me, coming in at #21 (just ahead of "Animal House"). I didn't think it would make the cut.
But the more I thought about it, the more I realized how great it was. I loved it as a kid, and I still love it now.
It's not overly dramatic like a lot of movies nowadays, and it's almost entirely truthful. The term "based on a true story" is thrown around a lot when it comes to sports movies, but it's often not entirely true. (Just look up the actual story behind the film "Remember the Titans". Not even close to the movie.)
However, "The Rookie" is pretty consistent with what actually happened to former pitcher Jim Morris, from what I've read about him. He did actually go from coaching high school baseball to "The Show" in four months. He was a 35 year-old rookie who was a former minor-league pitcher in the '80s. He did all of a sudden develop a 98 MPH fastball, although no one's sure exactly how that happened.
And he did actually strike out the first major-league batter he saw. (Sorry for the spoiler, but I figure it's okay since the movie is almost ten years old.)
The makers of the film even got Royce Clayton to play himself, since that was who Morris struck out in his first game. (Clayton also played Miguel Tejada in the film adaptation of "Moneyball".)
Morris did have some minor league-issued cards in the '80s, but he never had a Topps, Donruss, or Fleer rookie card.
Jim Morris didn't have a "rookie card" until 1999.
I do have Morris's '99 Ultimate Victory rookie card (also a dime box find), but I love his 2000 Impact issue because of the juxtaposition.
The word "Prospects" is proudly displayed across the front of the card. A year before this card was released, very few people even knew who Jim Morris was.
In 2000, Jim Morris was now considered a "prospect". A year before, he was teaching high school chemistry.
It's certainly a great story.
Posted by Nick at 2:25 PM

It is a great story. I need to watch that one again.

That is one of my favorite movies. It makes me cry every time that I watch it (I am not ashamed to admit it that a 42 yo man cries during a movie). I thought that someone issued a card of him around 2000 and found a Bowman Chrome card on COMC for the low price of $1.10.

I've never seen The Rookie. I guess I should check it out. I googled Jim Morris and it seems like a great story!

It's definitely a must-watch if you've never seen it before. One of the best sports stories ever told.

I have six cards of Morris, the only one that's worth more than a buck or so is the '99 Ultimate Victory rookie card in this post. I think it's worth around $5 because it's a short-print.

And Mark, I'll be glad to share the list. I just have to find a way to tie it into baseball cards somehow. :)

Nick, I'm sure that you can find a way.