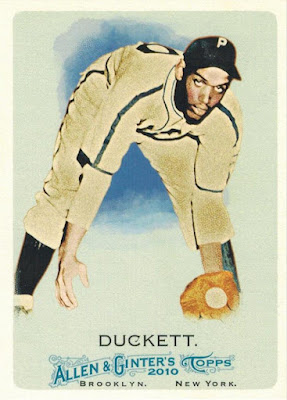 Every time I call myself a baseball fan, I am forced to live with the incredibly flawed and whitewashed history of my favorite game in the world.

When it comes to cards, my consciousness of baseball's checkered history runs even deeper than that -- I admit that I myself am a privileged and imperfect card collector. I collect cards of Ty Cobb. I collect cards of Cap Anson. I collect cards of many figures from baseball's early days who forced black players out of the major leagues. I do this because, as a fan, I am intensely interested in piecing together the history of the game. But as a living and thinking and rational human being, I am often ashamed of my ability to sometimes compartmentalize the racism of baseball's past as I look through my cards.

With everything happening in the country right now, and the incredible sadness I've felt about it, I tried to cope by looking through my Negro League collection today. My Negro League cards are a treasured corner of my collection, but they're relegated to a small, separate binder outside the shelves of my standard team binders since many of the game's greatest black stars spent the first century of baseball's history unable to play for teams like the Cubs and Red Sox. The sum total of my Negro League collection spans maybe a dozen double-bagged nine-pocket pages. My Yankees binders contain hundreds.

While looking through my Negro League cards, I couldn't help but think that the card industry itself, by reprinting the same '52 Topps Mantles and T206 Wagners to death, was doing a disservice to the real history of baseball, a history that included black players well before the rise of Jackie Robinson. Outside of a few random inserts here and there, Negro League stars are all but ignored in today's hobby (which still includes copious amounts of Ty Cobb cards). For a few years there, Topps included a terrific subset of forgotten Negro Leaguers in their A&G sets, but those faded away ten years ago and haven't resurfaced since. The voices of the Negro Leagues have been all but silenced in today's hobby.

With that in mind, it seems relevant to acknowledge ten card producers who, whether through entire sets or individual cards, documented the Negro Leagues in all their glory, and acknowledged their importance to the game we love. 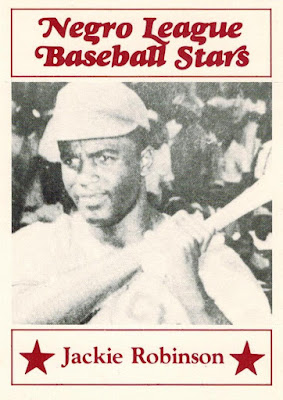 This is one of the few all-Negro League sets I've come across -- they're fantastic and not as terribly scarce as many of the non-major-brand oddballs of the era. 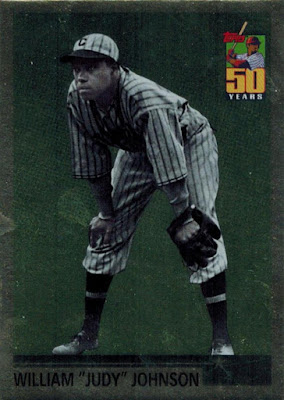 Not the most thrilling design, but a rare nod from Topps to the importance of the Negro Leagues. 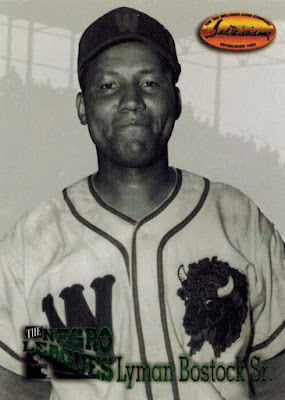 I don't know how much input Ted Williams actually had into the sets that bore his name in the '90s, but I tend to think it was at least a fair amount since Teddy Ballgame was an early advocate for Negro Leaguers being inducted into the Hall of Fame (he said as much in his own HOF speech).

It makes sense, then, that the sets he (perhaps) created are home to some of my very favorite Negro League cards ever made. 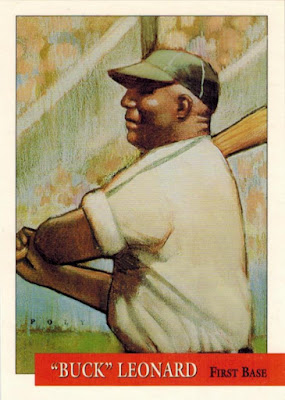 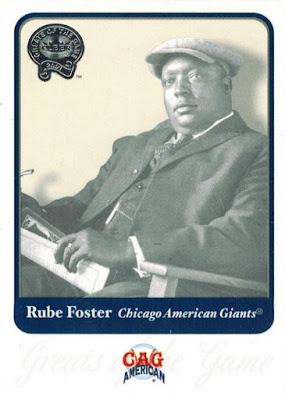 Many sets that contain the name "Greats" or "Legends" solely focus on the best players of the major leagues as we know them -- if they acknowledge someone like Satchel Paige, they only do so because of the time he spent well past his prime with the Browns and Indians.

Given that, it's quite a treat to see a select group of Negro League stars such as Rube Foster honored in the '01 Fleer Greats of the Game checklist, one of the few sets to actually live up to its name. 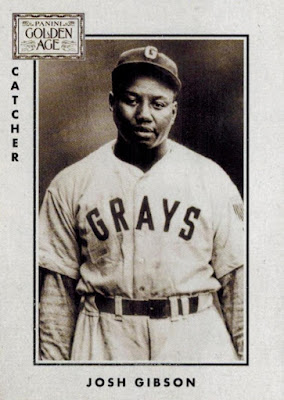 The sympathizer in me wants to think there's a legal reason for Topps not making Negro League cards, like copyright issues or something along those lines, rather than flat-out ignorance or worries that they wouldn't "sell" as well as Bowman.

The fact that Panini included a good amount of Negro League stars in their Golden Age sets a few years ago seems to line up with some kind of legal reason -- either way, cards like these are a big reason why I still miss this brand so much. 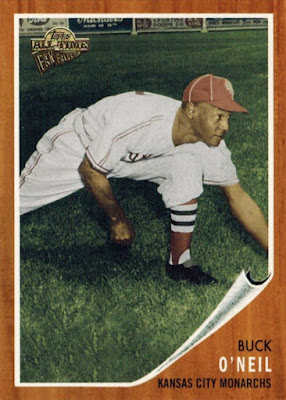 I'll give credit where credit is due, however, to Topps including this nod to Buck O'Neil on the iconic '62 woodgrain -- even though it feels shoehorned and bit revisionist, it's still a wonderful card. 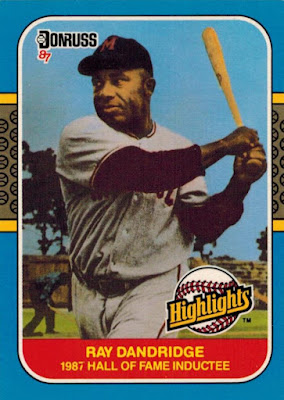 It may have happened far too late, but many Negro Leaguers were eventually enshrined in Cooperstown -- including Ray Dandridge, whose HOF induction in 1987 was documented on this Donruss Highlights card from that year. 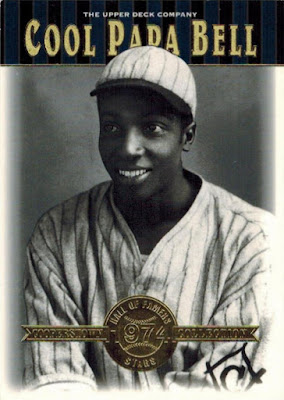 As a whole, I've yet to find a better set that honors the Negro Leagues' HOF inductees better than the aptly-named 2001 UD Hall of Famers release, which features a healthy amount of the game's pre-integration stars (this Cool Papa Bell might well be my favorite Negro League card ever made). 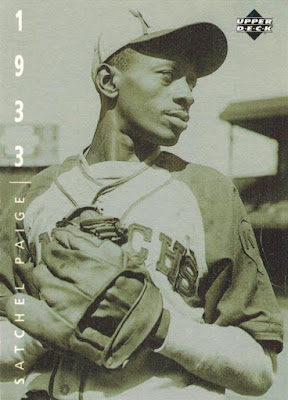 Unlike most compendiums of baseball history, Ken Burns's Baseball gives the Negro Leagues its rightful amount of screen time, and juxtaposes it brilliantly next to the goings-on of the all-white major leagues that so often dominate the history books.

It makes sense that the card set issued in accordance with the opus -- which I received as a gift from my parents as a child and have treasured ever since -- contains so many of the stars like Satchel Paige and Josh Gibson that made the Negro Leagues the success it was.

Of course, the obvious tragedy of the Negro Leagues is that they never should've had to exist at all, which is a great source of pain when I look through the (far too few) cards I own of the Homestead Grays and Pittsburgh Crawfords. Buck O'Neil and Rube Foster should have been allowed to play next to Jimmie Foxx and Babe Ruth. They should have been able to wear the Yankee pinstripes or Dodger blue. The black greats of baseball should have been able to flourish in the major leagues, and have their stars burn every bit as brightly as the white greats of the same era.

Their lives, then and now, should have never had to endure in the shadows.
Posted by Nick at 6:06 PM

I really want to see cards of the 2006 Hall of Fame class that included guys like Biz Mackey, Turkey Stearnes, and Pete Hill, greats for whom there is little to no representation in the world of baseball cards.

Voting for the Josh Gibson.

Such an excellent post!
Nick, if you're ever looking for a road trip might I suggest Kansas City? For starters, the barbecue might be the best in the country and you could catch a Royals game in the evening. The main attraction would be the Negro Leagues Baseball Museum. You'd absolutely love it.
I'm all for a new Negro League set and I hope one of the card companies puts one out before too long. Maybe Topps does an on demand set with the proceeds going to the Negro Leagues Baseball Museum? I don't dabble with the on demand products, but I would for a set like that.

For anyone that doesn't know, Joe Posnanski's book "The Soul of Baseball: A Road Trip Through Buck O'Neil's America," is a fantastic baseball read.

Wonderful post Nick! I'm with you, there definitely needs to be more cards honoring the Negro League stars.

Great post. Maybe this year Topps or someone will issue a decent sized set with Negro Leaguers.
I was lucky enough to meet Buck O’Neil at a Royals Spring Training game. Although I was only 15 and didn’t understand how important of a man that he was, I was still old enough to sense just an awe and reverence in his presence. He was a little annoyed that fans were bugging him before the game was starting but was still nice enough to autograph my ticket. Something told me to shake his hand, and I’m glad I did.

Great stuff. It would really be nice if there were more cards that went deeper into this history. So many of us know so little about truly great players such as Oscar Charleston and Pop Lloyd. I've been meaning to buy the Graig Kreindler postcard set--maybe I'll do that soon. https://negroleagueshistory.com/shop/baseball-cards-postcards/negro-leagues-centennial-team-postcard-set/

BTW, Ty Cobb in all likelihood wasn't a racist, at least by the standards of the time. https://bleacherreport.com/articles/43506-ty-cobb-was-not-a-racist Cap Anson, on the other hand, was the worst.

What's been happening reminds us how far we still have to go, and how important it is to know our history. Thanks.

Cool Papa Bell is the first Negro League player I ever heard of. I still light up when I see his cards.

Great read Nick! I'm a huge fan of Negro League cardboard and definitely agree that there needs to be more of it these days.

Great post. One of the things I've thought about is how baseball cards serve as a record of the sport and how it's important to be aware of who's being excluded from the narrative.

Great post,I forgot that I had that 87 Dandridge card.

Great post Nick. I recall really liking the 2001 fleer stitches in time insert set. I've never forgotten when I first learned about segregation through baseball and jackie robinson, and I've tried to keep learning ever since.

Nick, thank you for this thoughtful post. Yesterday I found myself in an unusually sad funk. I don't like much of what I've seen in the past couple of days. We need true leadership. We need to LISTEN. I've been a Negro Leagues fan since I began collecting in 93. I still haven't completed "What Could Have Been." And yes, it should have been. Buck O'Neil was a great ambassador of Negro League baseball and HOF entrance. He belongs in the Hall himself.

Nice work Nick, this was a fantastic post! Maybe someone at Topps will take notice, as I think a Negro League-themed set would actually be a huge hit. I know personally I'd be more excited to collect that than I have been about most of what they're churning out these days. Anyway, again great work putting this together!

I’ve been collecting the Negro League HOF’ers for the last couple of years. I only have a few more to go.

Wonderful post!I picked up a couple of the Ken Burns cards recently, and the Satchel Page card is just amazing. I completely agree that Topps or Pannini need to come out with a proper set focusing on these often forgotten players.

Fantastic post. My brother called me up last week (or maybe the week before) to let me know that Amazon Prime has the Ken Burn's Baseball documentary for free. I've seen it a few times already, but started rewatching it last week. I love how it covers the Negro Leagues and gives baseball fans a broader view of this sport's history than we're often exposed to.

I'm guessing no sets are being made since you really cant get autographs and relics from the players now, plus the probability of incomplete player stats from that time. Without stats you're limited to the top what, 40 players for bios. It's too bad, I'd certainly buy packs of that product.

I'll second Jeff's comment. I've learned so much about the Negro Leagues from Joe Posnanski.

I really wish there were more cards featuring players from the Negro Leagues. I recently started collecting Satchel Paige. I want to try and add James "Cool Papa" Bell, but it's challenging to find cards.