Big League will save us all 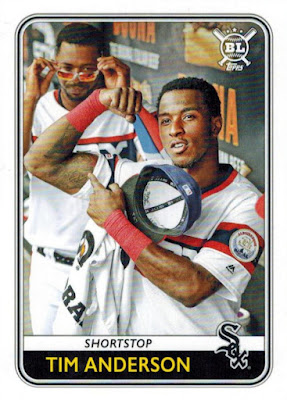 In case you haven't noticed, I've been somewhat down on the hobby lately.

I've just kinda had it up to here with the people milling around Targets/Walmarts, waiting for the vendor to show up so they can clear out the inventory. I've had it with people treating cards as a capitalistic venture. I've had it with people acting like Billy Badass because they pulled a card of some rookie no one'll know in three years. And sure, these misguided souls have always been out there, but it seems to me that they're coming in bigger droves now. I've long been an advocate of the collect-how-you-wanna-collect theory, but I can only take so much greed and idiocy (and let's face it, none of those people are collectors).

But what I've really had it with, perhaps most of all, is Topps pandering to these people who see cards as nothing but profit modes. All the online-only exclusives and high-end products are clear evidence of that. And yet somewhere, way out in the distance, I saw a glimmer of hope through the storm of dollar signs. I saw it earlier in this year when Topps released their planned product lines for the 2020 card season, and that light has gotten closer and closer and closer with each passing day until, finally, last week, it arrived, and blinded us with its power.

That jewel in the sky, of course, was Topps Big League. 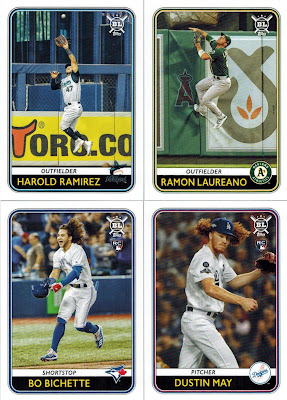 I fell in love with Big League months before it ever actually existed, back when it was nothing more than mock-ups on a virtual sheet.

I loved it so much that I pre-ordered a box of it way back in March, back before this whole pandemic thing put a halt on most new card product. I'd also like to make a special note of the fact that I paid exactly $30 for an 18-pack box of Big League, which is a price point I think way more sets should have. And while it took three long months of waiting, I was absolutely thrilled when it finally, against all odds, showed up yesterday.

I suppose a small part of me was worried that Big League wouldn't live up to my massive expectations, that the glow in the sky I'd seen long ago would turn out to be an illusion -- but I'm happy to report no such thing happened, because, and I'll say this forever, OH MY GOD I LOVE THIS SET. Perhaps the only thing I don't like about Big League is that it shines a big gigantic light on all the things Topps could be doing, but most of the time, just doesn't, whether out of scorn for the low-end collector or pure apathy (or both).

Topps can, for instance, make an absolutely fantastic card back when they put their minds to it -- because this, my friends, is what the back of a baseball card should look like. 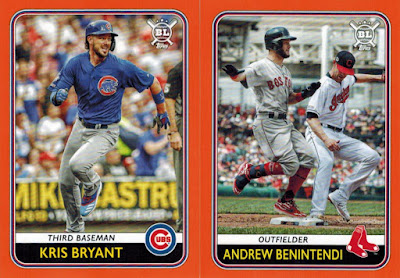 Big League also reminded me how much I miss sets with borders, mostly evidenced by how well these parallels pop. 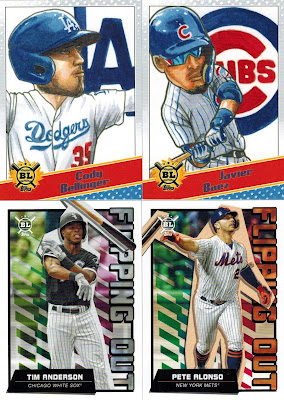 Even inserts, which are designed to be somewhat of a jolt from base cards, have gotten kind of bland lately.

Not so with Big League, which features insert sets that range from bat flips and cartoons -- the big background logos give those "Star Caricatures" a bit of a '90s Studio feel to them, which I like. 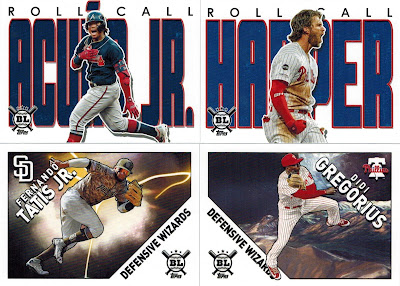 Those "Roll Call" cards don't grab me much, but they're certainly distinct, which is basically all I can ask out of an insert set.

And it's weird: I don't read comic books, and I find superhero movies dull, but I really like when companies add a little superhuman flair to their baseball cards (see: Metal Universe). 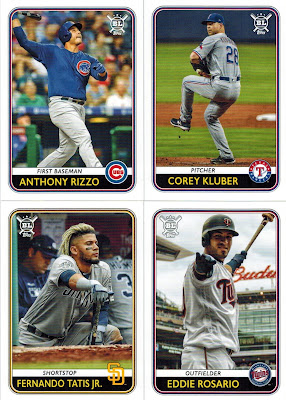 But let's be honest here: you're here for the base cards, and so am I.

The 2020 Big League design alone is enough to win my heart -- it reminds me a lot of the excellent 2009 Upper Deck OPC layout, with a little '81 Fleer mixed in for good measure. It's the best design I've seen from Topps in longer than I can remember, and right now I'd have to call it my favorite of all three Big League sets thus far (and I know that's not just the new-release rose-colored glasses speaking).

But along with the design comes absolutely stunning photography, with a few Dudes on New Teams mixed in for good measure! 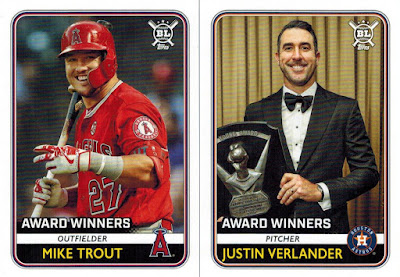 And the subsets are just as good as the base design.

Perhaps I'm a little biased since cards featuring awards are a mini-collection of mine, but even though it's somewhat jarring to see ballplayers in suits and ties, it's kinda nice seeing some cards with the actual hardware displayed on the front. 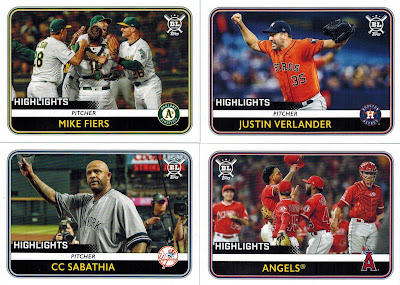 Baseball in 2020 is gonna be weird, but hopefully 2019's cornucopia of memorable moments will make up for whatever's lacking this year. 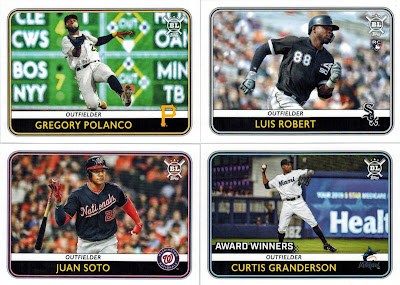 I guess what I like most about Big League is that every single card feels like the end result of real, actual effort.

Over and over again, I've gotten the opposite feeling in today's hobby, the feeling that cards are absentmindedly churned out on an assembly line. Too many times, I've even asked the question: do the people at Topps even LIKE baseball? I still often wonder about that, but the fact that something like Big League exists, with designs and photos that appear to be selected by people who do like baseball (and baseball cards!), gives me hope. It sounds simple, but I mean every word of it: this is what baseball cards should look like. This thrill, the excitement I've tried to communicate in this post, is what I should feel about baseball cards all the time.

Even with all the casualties and imperfections of the current hobby, a set like Big League makes me proud to collect baseball cards, plain and simple. 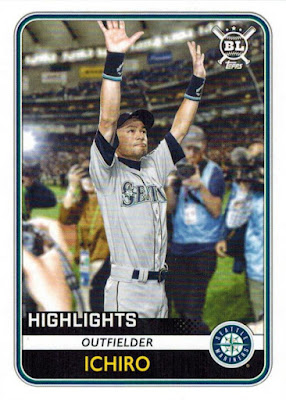 So go ahead and take a bow, Topps Big League.

You're gonna save us all. 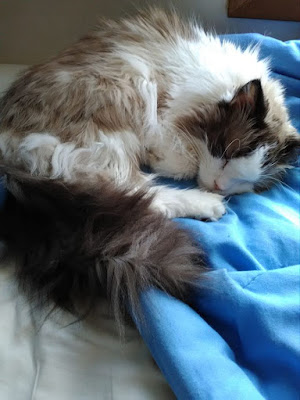 (Also, on a more somber note, we had to put our oldest cat, Latte, to sleep this afternoon. If you have a pet in your life, please give him/her an extra hug for me tonight.)
Posted by Nick at 5:48 PM

Very sorry for your loss.

Amen, brother! BIG LEAGUE or go home!(?)lol. I went on a day trip today which always takes me past a card shop. I stopped in for my yearly visit and bought a few packs of BL. I LOVE THEM! Perfectly designed base cards do exist! I'm sorry to hear about Latte. Cats make life better. I know you'll miss her.

Some great cards here!..hope there's more gems in the packs I have waiting for you!

The Rainbow Bridge is real,sweet kitty..

I'm so sorry to hear about Latte. I'm in the middle of feeding dinner to our two cats, I'll give them a little something extra in memory of Latte.

I was hopeful when I bought a blaster of Big League yesterday morning. Since I was out running around after work today, I bought another blaster because I know I would buy a 2nd sooner or later.

Sorry about your cat. I love the little guys. You absolutely nailed it with your commentary today. State of the hobby, mindset of Topps, and how this set gets it right.

Sorry to hear about your cat.
I feel ya about Topps not caring about the little man and putting no effort into many products. Glad you were able to get some fun stuff from Big League. I’m hoping to maybe get lucky tomorrow and find some Big League or Series 2 if my wife goes to Target.

I hope to find Big League cards soon. I also have liked the Big League sets more than any other these past few years.

Sorry to hear about Latte. Losing a four legged friend can be all kinds of tough. Hang in there.

I echo everything you said in this post. I'm so pumped about this set and loving everything from the photography, to the design, to the fun facts on the back... heck, even the cardstock!

Oh, I already have some dupes after two blasters, including a Schwarber... which you'll definitely want. I'll set one aside for you!

Condolences my friend on the loss of Latte. Hang in there, you'll be fine.

Also ... this set looks all kinds of awesome on all kinds of levels. However, I'm not up to the challenge of braving Target or Walmart so I might have to order some blasters or maybe a box online (DYK if you have a Target Redcard you get 5% off?).

I echo all your sentiments as well about those who show up and are in this just to flip cards and could give two tosses about base cards. To each his (or her) own though but I'm like you, I'm in this to collect and in this for fun. And nothing is more fun than Big League.

'98 Upper Deck Retro is what it looks like, and now I know what I would have been collecting if I was collecting in 1998. ... I like the Roll Call cards.

I've got my Braves BL base and in Orange coming in (maybe tomorrow).

A. Sorry to hear about your kitty.

B. I can't wait to get my hands on a blaster of Big League. I really like this year's design.

C. I understand you frustrations with the current hobby situation. Maybe my age has mellowed me out. Or maybe it's because I lived through the late 80's and 90's when there were plenty of "investors" floating around the hobby. Either way, I try not to let them bother me. But I do feel like Topps is treating a high percentage of their products as a cash grab... which definitely annoys me.

So sorry about Latte. A very beautiful cat. And can somebody please tell me why the heck this year's Big League design wasn't this year's flagship design?

Sorry to hear about your cat. We just put our oldest dog, a German Shepherd named Sienna, to sleep a couple weeks ago. It's definitely hard.

As for Big League, I was a little disappointed that it is a smaller set this year. I still like huge sets with diverse player selection, which it used to have, at least a little more than it does now.

I agree with the 09 opc and 81 fleer references. I also see some recent topps total in the design. I really like this set!
Sorry about your loss - we have a cat and it will be a dark day when she passed.

Sorry about the kitty. I'm jealous that you've gottne so much Big League though. I haven't been able to get near any product yet and it's kind of grating on me.

Great post, Nick. You just made me buy my own hobby box.