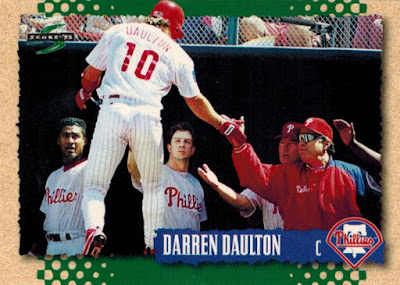 For a long time, I think I was more of a card chaser than a card collector.

There's important distinctions between the two. I've mentioned many times that I used to go nuts over jersey cards as a teenager -- I chased stuff that was inserted into cards. After that, I had a brief obsession with serial-numbered cards -- I chased different versions of base cards (but not really the base cards). I can vividly remember opening packs as a teenager, seeing some kind of parallel in the middle of the pack, and bypassing every base card to get to it. I quite literally chased that card. I sacrificed the joy of that entire pack to get to it.

I find box break videos incredibly dull, but on the rare occasion I do try to watch one, I usually see a blur of base cards, and then a single long shot of whatever the real "prize" of the pack was (usually not a base card). This, to me, isn't really collecting. It's chasing. I find the term "the thrill of the chase" to be a bit misguided -- sure, there are specific things I chase, but that's not my sole reason for hoarding baseball cards. My thrills don't come from chasing for something through that blur of base cards. I want the base cards. I want to collect them.

I'm not saying I don't get excited if I see something cool waiting in the middle of a pack these days, but I still try to absorb everything else in there before getting to whatever caught my eye -- which usually isn't even anything better than those terrific, joyous base cards. 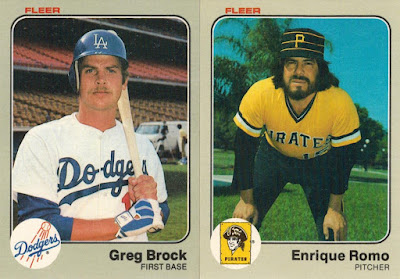 A reader named Wes W. who's been shoveling great cards on me for a long time now (most recently a scarce Hoyt and a '56 Topps card!) recently sent me a big ol' stack of cards in the mail, not a single one of which would be defined as a "chase" card in the modern sense of the term.

These are often my favorite kinds of packages to receive. They are cards to be looked at, scoured, appreciated. Collected. I know Wes probably included most of these cards for a reason, and I want to find that reason. As a kid, I think I tended to write off entire sets as "boring" and basically ignore them forever. I still don't think '83 Fleer is anything special, for example, but as a collector I can at least appreciate bits of greatness hiding inside a set that might not be at the top of my list. 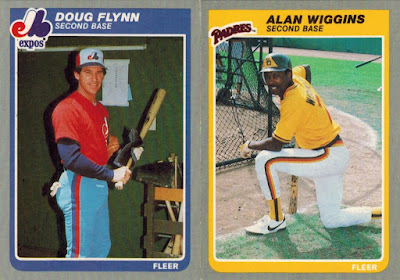 If you collect long enough, and try to find the beauty in each and every card, you'll probably find certain sets once banished to obscurity starting to grow on you.

Unlike its counterpart from two years prior, 1985 Fleer is definitely one of those late bloomers for me -- and that was before I'd ever even seen these two gems courtesy of Wes. 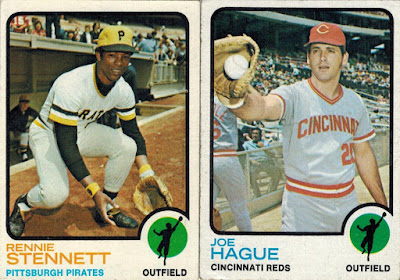 I, of course, love '73 Topps for its action, but here's proof it could do poses just as well as anyone -- it's a set that, for whatever reason, just decided to break from the status quo, and I'm forever thankful for that. 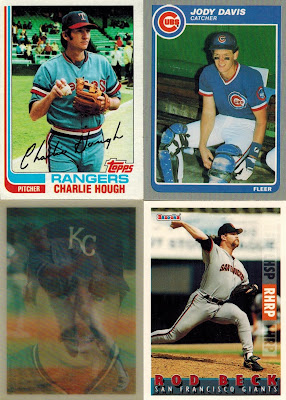 I think it's telling that I almost never decided to start new player collections back when I was a "chaser" -- the guy on the front was almost secondary in some cases.

I'm doing my best to rectify that these days, and somehow Wes must've known that all four of these guys are relatively new and woefully overdue player collections of mine. 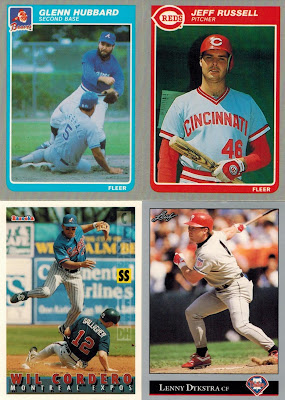 Mini-collections have been one of the supreme joys of my post-chase life, but packages like these show me just how far I still have to go with those. 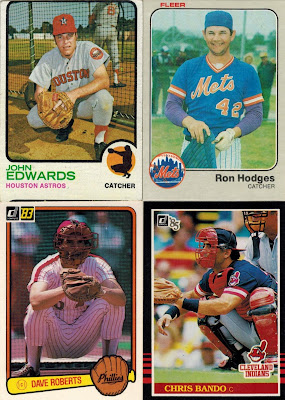 I don't think I ever realized how consistently great catcher cards are until recently, but better late then never I guess.

(Also, who is Ron Hodges, and why is he wearing Jackie Robinson's number?) 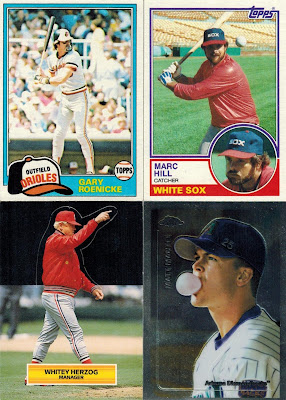 Other great cards from Wes that I might've missed in my "chaser" past -- primitive facemasks, garbage-bag warmup jerseys, and more. 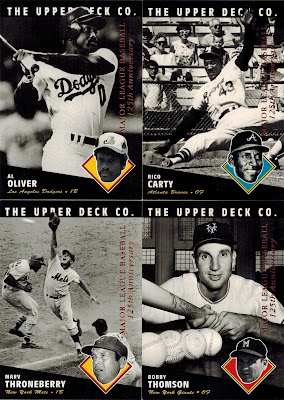 This isn't to say that chasing doesn't have a role in collecting -- parallels in general, when you get down to it, have no reason to exist, and are pretty much just chase cards.

While I don't obsess over them as much as I once did, I still enjoy parallels, and welcome them into my binders. They sometimes offer the pleasure of allowing me to appreciate a beloved set all over again, like these 125th Anniversary foil parallels from the excellent '94 UD Heroes checklist. I already have all the base cards of these, but the parallels offer an extra delicacy.

The only thing that drives me slightly up the wall about this set is that some of the main and inset photos don't match -- I so badly want to put that Al Oliver in my Dodger binder (he doesn't have many Dodger cards) but I can't do it because of that blasted floating head of him as an Expo. 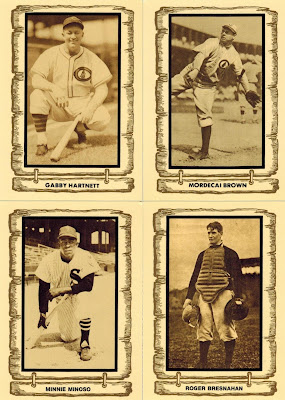 These were issued by a brand called Cramer (first name, Cosmo?) for a few years in the early '80s, and I love 'em because they almost exclusively feature names you almost never see in the hobby these days.

But while the Three-Finger Browns and Roger Bresnahans of the world are of course fantastic, one of the Cramers from Wes was a card I'd actually been wanting (chasing?) for a long time now. 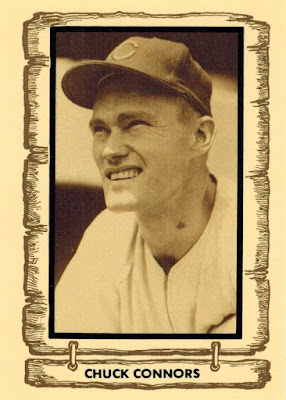 This is just my second card of Chuck Connors, a man whose brief baseball career would be all but forgotten if he hadn't starred on the hit series The Rifleman later on in his life.

I've long found these rare sports/pop-culture crossovers fascinating, and Connors is one of the faces of that particular Mount Rushmore. I've known about this card for years, but a copy just never managed to fall into my hands until I was lucky enough to have Wes came along. I love it for exactly what it is. A baseball card. Not a baseball card with a piece of jersey embedded in it, or a baseball card limited to X amount of copies.

It's why I'm proud to call myself a collector, and not a chaser.
Posted by Nick at 5:53 PM

Oliver's a Dodger in the bigger photo, AND is listed as such. It's 2 against 1--put him in the Dodger binder!

Now I'm wondering who else you'd put on that Mt. Rushmore. I'm also tempted to blog about my own. Hmm.

I totally agree with everything you said. Well done

I'm a "collector" rather than a "chaser" too. I'm a set builder and those videos of box breaks where the base cards might as well be trash and all they care about are the valuable inserts drive me nuts.

I don't mind people liking the chase, but its the waste that kind of bothers me. Like why do they even bother making the base cards if the pack rippers don't want them?

Back in the 80s we did chase rookie and star cards which were part of the regular set and it was equally thrilling to pull one of those as it is to pull a high value insert today. The difference is that we didn't just throw the commons in the trash since most of us would be trying to complete the set too.

I'm definitely a collector, as well. But I do like to chase Vogelbach cards! (I just can't help myself.)
Also, happy early Big League Release Day! I hope you enjoy collecting/building that set!

As a kid, it boggled my mind to see base cards just left behind by someone who opened a pack and apparently didn't get what they wanted.

I'm a collector, too. It's funny. I used to be a mild chaser, but I sold almost all of my insert cards on Ebay during some lean times. The only ones I kept and keep an eye out for are Topps platinum 1/1's. They are like that certain girl I can't get out of my mind.

I see myself as a collector as well.

Also, those 80s cards you showed are just fantastic!

I definitely chase. I target very specific singles that tend to be chase cards like autographs, relics, inserts, or parallels. But at the same time I enjoy collecting the base too.

I'm closer to Fuji, in that I want the rare and funky, but I am not a chaser like you mentioned, where the player on the card is secondary. I definitely think collectors have more fun, so I am trying to move in that direction!