Into the Sunset: The AL West Team 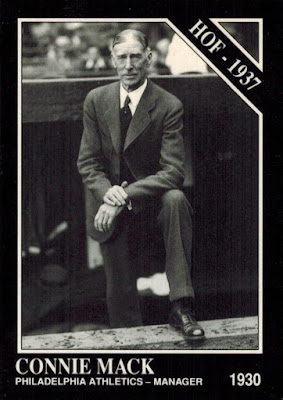 It's been darn near a year since I did a Sunset post, so I figured it's time I revived the theme here today.

A refresher, if you're new here or don't quite recall how these work (for which I wouldn't blame you): with these posts, I'm trying to make the best team possible out of players who finished their careers in each respective big-league division (since I don't quite have enough of these to do each individual team). Much like actual All-Star teams, all franchises will be represented at least once, and I'm doing my best not to repeat players/stints already covered in my Short Term Stops theme, unless relevant and/or necessary.

Today begins our trek into the American League world of Sunsets, starting with the AL West division, which is notable because it contains my two favorite non-Chicago ballclubs with the Angels and A's (and the Astros were probably my third-favorite before...you know). Outside of the respective Central Divisions, this is probably the division I pay the most attention to during the baseball season, and thankfully either the A's and/or Angels have been in the race in recent years.

Oddly enough, however, my two favorites are the two least-represented teams on this Sunset roster, with only one player a piece -- which I hope shows I don't play favorites here. 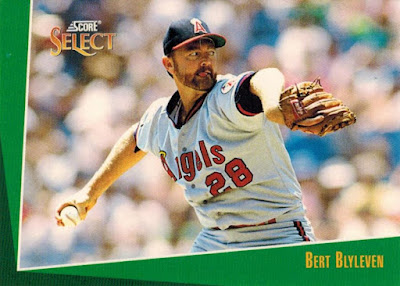 The lone Angel on this roster is the pride of the Netherlands, none other than Bert "Be Home" Blyleven (one of my favorite Chris Berman nicknames).

Blyleven was 42 years young in 1992, and had his prior season completely wiped out by injuries. But that didn't stop him from making a valiant comeback, appearing in 25 games and posting an inauspicious 4.74 ERA in what would be the final season of a Cooperstown-bound career.

Bert was lucky enough to receive a handful of true sunset cards in 1993 -- cards issued the year after his retirement and thus featuring complete stats -- which look nice in my collection of a guy I believe to still be vastly underrated (if such a thing is possible for a HOFer). 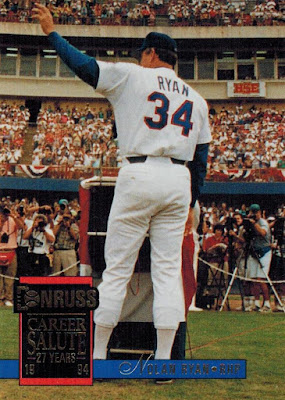 What more can be said about Nolan Ryan?

He debuted during Lyndon Johnson's presidency, and retired during Bill Clinton's, which is mind-boggling if you sit and think about it. Statistically, Nolan's sunset season wasn't too notable -- he won five games and notched the final 46 strikeouts of his record 5,714 career K's -- but it definitely marked the end of an era.

The five years Ryan played for the Rangers is actually tied (with the Mets) for the least amount of time he spent with a club during his career, but weirdly, I think of him as a Ranger more than anything else. 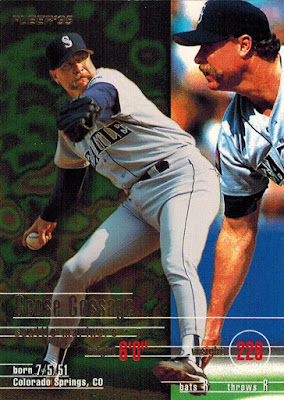 There's not much to say about Goose Gossage's sunset season, except that I find it insanely fascinating that a guy who debuted in 1972 played long enough to be featured on a design like 1995 Fleer. 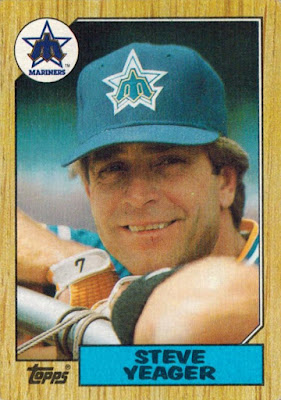 Steve Yeager was a Dodger for 14 of his 15 big-league seasons -- the lone exception, of course, being his sunset season with the Mariners.

Or, at least it's his sunset season if you don't count his time as a third-base coach with the Indians in Major League. 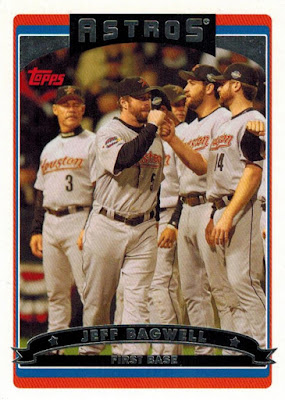 As much as I love Short Term Stops, I have immense respect for dudes who spent their entire career with one team.

And depending on how you look at it, Jeff Bagwell did exactly that. Even though he was drafted by the Red Sox and infamously traded to the Astros before ever appearing in a big-league game in Boston, I tend to label Bagwell as a Career Astro despite those early years in the Red Sox system (though I understand why others might think otherwise). Bagwell's sunset season was a classic tale of ecstasy and agony -- he missed most of the year with a shoulder injury, but he healed in time to play in the first World Series of his long career (which the Astros lost to the White Sox).

Not a bad ride into the sunset. 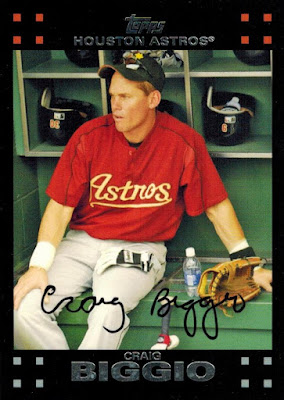 Craig Biggio, like Bagwell, was another Career Astro -- sadly though, he doesn't seem to have any true sunset cards to his credit, which means I have to settle for this one, courtesy the awful 2007 Topps design.

Craig Biggio had a strange career -- he broke in as a catcher but became a star as a second baseman playing right alongside Jeff Bagwell. He's got 3,000 hits and a plaque in Cooperstown, but never came all that close to winning an MVP.  He was even thrown out at second trying to stretch his 3,000th hit into a double, which I think is both tragic and awesome.

I don't often think of Craig Biggio as one of the best players of my baseball lifetime, but he probably was. 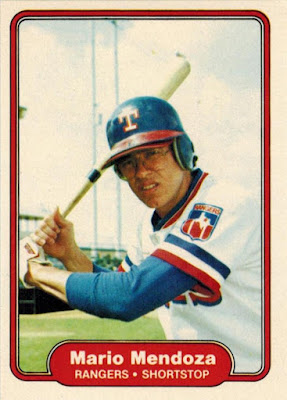 Fun Fact #1: Mario Mendoza may have hit well below the Mendoza Line in his sunset season, but he actually finished above it for his career (.215).

Fun Fact #2: Mendoza did hit below the Mendoza Line in five of his nine big-league seasons, though. 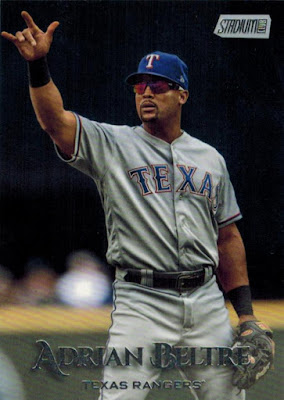 With Nolan Ryan and now Adrian Beltre, the Rangers seem to have a way of making players their own.

Unlike Ryan, Beltre did spend the majority of his career with the Rangers (eight seasons), but it was the last stop of his long career and wasn't anywhere near a career Ranger, considering he played in the bigs for 21 years. His years in Texas were indeed spectacular: three All-Star Games, three Gold Gloves, and over 1,000 hits -- including his 3,000th during his 2018 sunset season.

When the time comes to give Beltre a plaque in Cooperstown, I'll bet he'll be wearing a Rangers hat on it, because that's where he seemed to become the beloved man he is today. 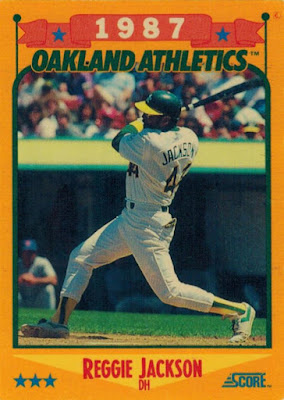 These sunset posts can get a bit tricky with guys like Reggie Jackson who ended their careers as DHs after a career overwhelmingly spent at other positions.

For posterity's sake, I'm including Reggie as an outfielder on this roster even though he spent his final years as mostly a DH, and is listed as such on his sunset cards. All three of the outfielders on this roster (as you'll soon see) had gloriously full-circle careers, in that they returned to their original teams in their final years. Reggie broke in with the (Kansas City) A's in 1967 and returned to them a full 20 years later for a final swan song, hitting the final 15 of his 563 career homers in 1987.

Jackson received a handful of true sunset cards -- though oddly, none from Topps -- Score's tribute to Mr. October is still one of my favorite subsets in baseball card history. 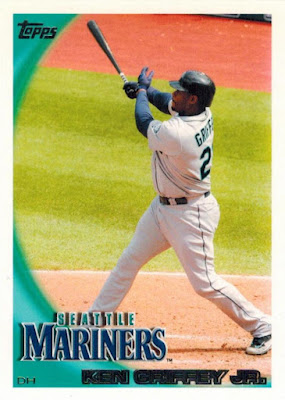 It's hard to fault guys like Ken Griffey Jr. who want to squeeze every last ounce out of their careers, but typing out that very un-Griffey sunset stat line made me cringe.

Griffey, like Reggie Jackson, wound up as a DH, but he's much more famous for roaming center field, of course. Also like Reggie, Griffey returned to his original club at the end of his big-league tenure, spending his final two seasons with the Mariners in what has almost become a footnote to his otherworldly career.

I'm not sure that The Kid has any true sunset cards, but despite the mediocrity of his last season, this Topps card remains one of my very favorite modern final tributes. 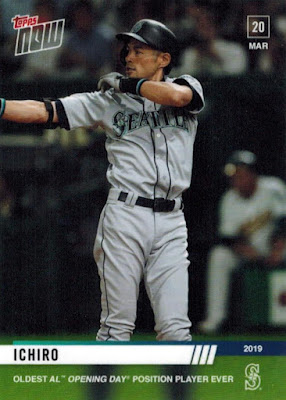 As promised, Ichiro completes the triad of full-circle outfielders on this sunset roster.

Ichiro semi-retired in 2018 after 15 games with the Mariners, but returned to play the final two games of his career in 2019, when the Mariners opened the season in Japan. He didn't get a hit (0-for-5), but his farewell was still a wonderful tribute to the man who is probably my favorite player of my baseball lifetime (approached only by Vladimir Guerrero in that regard).

Some baseball moments need the passage of time to become iconic, but not this one -- it'll be etched into my memory forever. 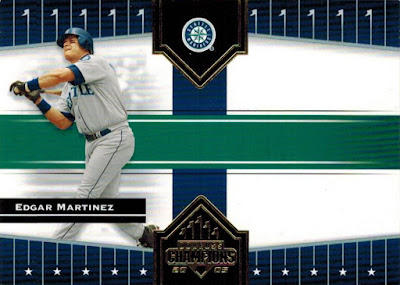 Because we're in the American League now, the DH is a thing, and who better to introduce it than probably the greatest man to ever play the position.

When you look at the stats, it's shocking that it took as long as it did for Edgar Martinez to get into the Hall of Fame (the .418 career OBP alone should've done it). But count me among the many who, at first, didn't think of him as a HOFer. I'm not one of those people who penalize DHs (and I have yet to hear a viable argument why anyone would), but when I thought of Edgar Martinez, I just didn't think Hall of Famer. But time, as it so often does, changed my opinion, and I'm ecstatic he's finally in Cooperstown.

Also, I wasn't even sure I had a true sunset card of Edgar -- he's not a top-tier player collection of mine -- but as fate would have it, I did, so thank god for Donruss Champions!...which is probably the only time you'll hear me say that.

That's it for this sunset squad -- thanks for tuning in!
Posted by Nick at 6:53 PM

Sunset cards are so great. Looking forward to more of these posts!

Lotta great players here. Don't know why I abandoned my Beltre PC. Maybe I oughta bring that back...

Mike Piazza would like to suggest that Steve Yeager might possibly not be the best catcher, or even the best Dodger catcher, to finish his career in the AL West.

It's certainly an interesting post. Though I disagree with a few things.

All PC guys of mine.

Yes! And the more random the team, the better!

Despite not getting to see many games, I was lucky enough to see many of these guys in person (Griffey, Jr. x3, Edgar x2, Beltre/Ichiro in same game, Gossage during the 1994 season pictured above). Never saw the Astros in person, but the starting 3B in the only minor league game I've ever attended (New Britain, 1990) was some guy named Jeff Bagwell. Seems like things worked out okay for him from that point on.

A Seattle sunset is quite rare with all the rain (and all those years in the Kingdome), but their city is well represented here!

So happy to see Ichiro and Griffey return to the Emerald City. Was hoping to see Piazza and The Big Hurt repping Oakland... but I understand that they were already represented in your Short Term Stops.

Love any Sunset post. Seeing the Bagwell card brought back vivid memories of that World Series against my beloved White Sox. Bagwell in the twilight of his career had to go up against Bobby Jenks who was throwing 100mph at that time. It wasn't pretty. One more weird tidbit about Bagwell: he was born on the same exact day as his fellow HOF 1B, Frank Thomas. Keep up the great work.