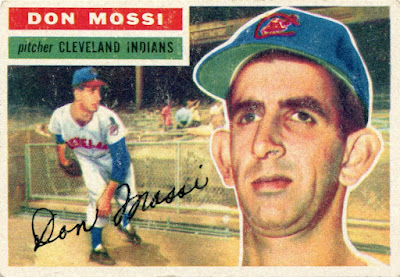 I've had a recent influx of cards come to my home that, if I lived and died by my "low-end collector" tag, I probably shouldn't like.

Not this Don Mossi, of course -- because no matter how you slice it, Don Mossi is awesome. He makes me feel just a bit better about not being much of a Casanova myself (which I think explains the widespread appeal he's found amongst baseball circles) and this '56 issue captures him at the very height of his zombie looks.

Mossi and a couple other cards I'm not supposed to like came from my buddy Brian of the "Highly Subjective and Completely Arbitrary" blog. As I mentioned a while back, Brian was responsible for stealing my Topps Retired Tony Oliva autograph prize package in Gavin's Big Fun Game.

Apparently, Brian felt some guilt over taking my goods and offered up a few substitute cards as an apology. 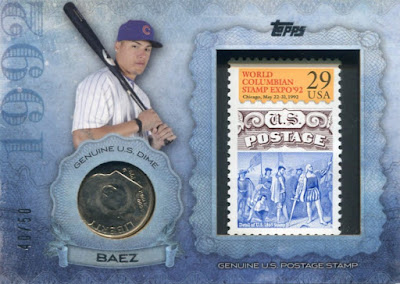 After the Mossi came the first Card I Shouldn't Like with this coin/stamp combo of Javier Baez, which, if I were to see it on the internet, I'd probably dismiss as gimmicky and something I'd never want.

But actually holding and owning a card like this is a different story. It's kinda cool having a baseball card/coin/stamp triad in my collection (I've never actually pulled one), especially one that matches said coin and stamp to the player's birth year. It's like three hobbies rolled into one.

Having Baez as the featured player makes a great card even better, given that he and I share the same birth year: 1992. 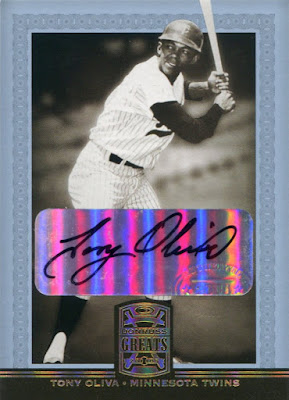 And as if the Mossi and Baez alone didn't win me over, Brian included a different version of the very thing he'd stolen from me in the first place: a Tony Oliva autograph!

In all seriousness, I wasn't too disappointed when Brian took my prize. Having an Oliva auto would've been neat, but in the end I got the customs lot I wanted and was content with that. And besides, the Oliva is much, much better in the hands of a diehard Twins collector like Brian.

But I ended up with a Tony Oliva autograph all the same -- definitely a keeper for me -- and now I feel like I got two Big Fun Game prizes for the prize of one. 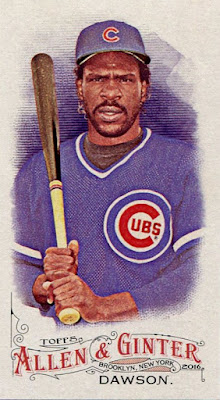 Another Card I Shouldn't Like came from a reader named Joey M. who contacted me recently about a possible trade.

This A&G Dawson mini wasn't the card in question, more of a throw-in to the real prize Joey had in store for me later on. But the fact is that I probably shouldn't much like minis, either. They roll around in nine-pocket pages like crazed children and never quite stay straight or look right next to their full-sized companions.

And yet I like -- nay, love -- minis as much as anything else in this hobby. 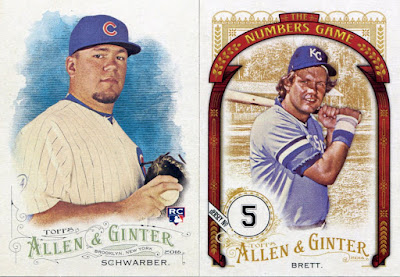 A&G is usually good for one bloated insert series a year, and while I want to bemoan and criticize the concept of a 100-card insert set, I just can't -- because when you get down to it, the ideas are original and the inserts themselves are pretty darn nice.

But enough with the insert set pontifications and on to the crown jewel of Joey's gift to me: 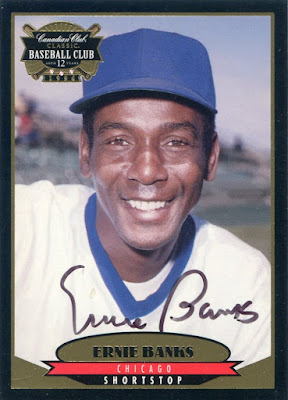 I am not, I repeat, not an autograph collector...BUT OH MY GOD WOW THAT'S AN ERNIE BANKS AUTOGRAPH!

I wasn't quite sure what to say when Joey said he wanted to send this to me. Sure, I'll take it, but I don't really have a kidney or soul to spare right now, because surely that's what a fair swap for a Mr. Cub autograph would be.

But no: Joey agreed to send it to me out of the goodness of his own heart, though I know what I sent back wasn't even a fraction as good as this beauty, which (as if the autograph wasn't enough) has a bit of an oddball thing going for it as well.

In what has to be one of the earliest examples of certified autographs being available to collectors, the Canadian Classic Whiskey company offered autograph cards of one of four HOFers (Banks, Brooks Robinson, Willie Stargell, and Billy Williams) with a purchase of grandpa's cough medicine. It is, suffice to say, my first Ernie Banks autograph, something I certainly never thought I'd own.

I don't care what the header of this blog says, because I just plain love everything in this post: coins, stamps, autographs, and all.
Posted by Nick at 6:17 PM

I'm guilty of being a Mossi collector as well, although I don't have that cool '56. Nice!

best of all with that dime card - you'll never go broke!

Don Mossi is by all accounts a great guy and he was also a premier left handed pitcher in his time. He is also still kicking at 89 yrs. old in California.

Read an article on Oliva a few years ago and have been a fan ever since. That guy was an amazing ballplayer.