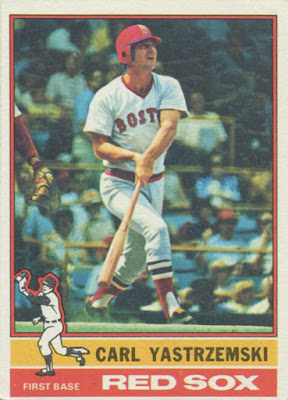 Carl Yastrzemski is what I like to call a "stop-and-look" kind of guy when it comes to my card collection.

If I happen to pull my Red Sox binder off my bookshelf, I always, always have to stop and look at my Yaz cards -- even if the original reasons for retrieving my binder are completely unrelated to Yaz or his ilk. I can't resist spending a few minutes flipping through my Yaz pages, every damn time.

Part of the reason Yaz is such a cornerstone of my collection is the fact that he simply received a ton of fine cardboard during (and after) his hallowed career, and today I'll be featuring the five best of his many stop-and-look cards. 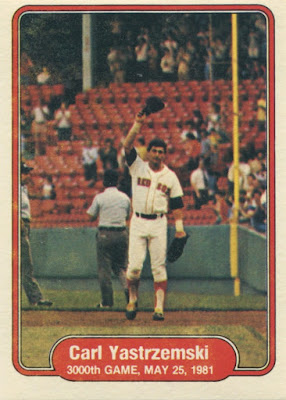 I don't know if there's a more universally loved figure than Yaz in the annals of Red Sox history.

Despite the many empty seats in the background, you really get a sense of how much he meant to the franchise with this gem, a special "tip of the cap" from '82 Fleer highlighting Yaz's 3,000th game with the Sox.

It's also a personal favorite of mine because there aren't many cards that give us a glimpse of Fenway's Pesky Pole territory. 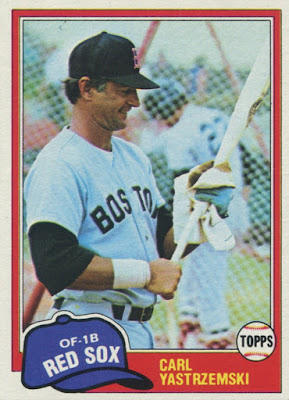 I seem to like '81 Topps more than most collectors out there -- it's one of Topps's ten best sets as far as I'm concerned.

Even amongst the many great cards in the checklist, Yaz here might be my very favorite of the lot: a candid shot of the slugger in the twilight of his career, applying pine tar to his trusted lumber while waiting for his turn in the cage.

It seems to me that '81 is among the least honored of Topps's retro designs, which is a shame because it's cards like this one that made me fall in love with the hobby in the first place. 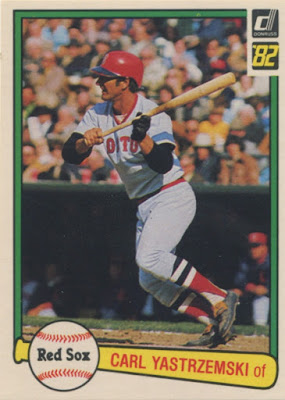 Here's what might well be the most mysterious baseball card ever made, for a few reasons.

1)  Bunting? Since when does the mythical Yaz ever lay down a measly bunt?

2) As described in a Night Owl post I remember reading in my early days of the blogosphere, the red batting helmet, pullover Sox jerseys, and striped socks are dead giveaways that this shot doesn't come from the early '80s at all. In fact, it can be traced all the way back to...1978.

I doubt we'll ever know for sure but, at the very least, the sheer mystery of it all makes it the most interesting Yaz card on the market. 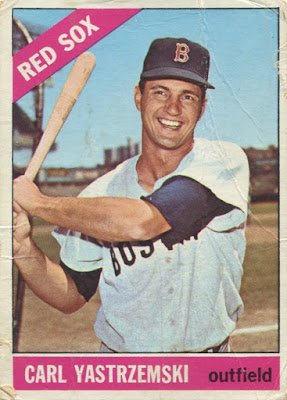 Nothing eerie about this one, just a fantastic image of a young, all-smiles Yaz -- which stands out given his largely stoic personality on most of his Topps cards. 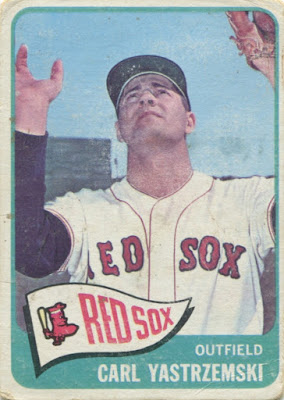 One of the white whales I've considered in the wake of my '52 Hoyt takedown has been Yaz's 1960 Topps rookie.

But even if I do one day capture that elusive rookie, I'm not sure it'd supplant this one as my very favorite Yaz card, if I'm being completely honest. There's just so much I love about the #1 card on this countdown.

For one thing, it's 1965 Topps, my favorite design in Topps history. And while the common (but great) looking-up-at-the-sky pose isn't anything out of the ordinary, there's something about Yaz doing it that makes it feel different, unique. It's like he's readying himself for the years of glory and stardom yet to come.

A solid list for sure, all five of these are among my favorites as well!

That 1976 Topps and 1982 Fleer cards would be up there for me. Had to look up his 3000th game on Baseball Reference to see what the deal was with the empty seats. Looks like it was a pretty good night for Yaz. He went 1 for 3 with 2 walks and scored the winning run in the bottom of the 9th to beat the Indians 8-7.

I share your fondness for the 1981 set. It is a great design and one of my favorites!

I'd have to add 1974 to my list, not just 'cause it's a staring down the barrel shot, but that it's what I remember to be my first card ever.

I sold a lot of Christmas wrapping to earn a hobby box of 500 1981 Topps baseball cards. Still my favorite set.