My white whale has been speared 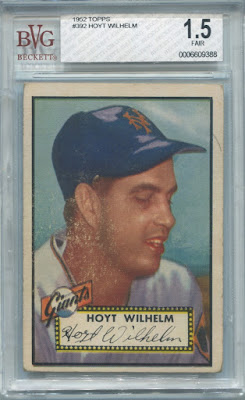 There's no sense dragging this out, so I'll just say it: after well over a decade of frantically combing the waters, MY WHITE WHALE HAS BEEN SPEARED!!!!!!!

This white whale in question, as I've said many times on the blog before, is a 1952 Topps high-number rookie of Hall of Famer Hoyt Wilhelm (all the buzzwords that basically say this is a really, REALLY expensive card). Hoyt, of course, is the man behind my most prominent player collection, and his '52 rookie has stood at the very top of my want list for years.

The Hoyt (like many of the high points of my collection) was gifted to me this afternoon out of the blue from my dad -- The Greatest Dad Ever -- and I think this'll go on record as The Greatest Surprise in the Entire History of Surprises for as long as I live.

The copy he bought was graded, and you know what I do with graded cards... 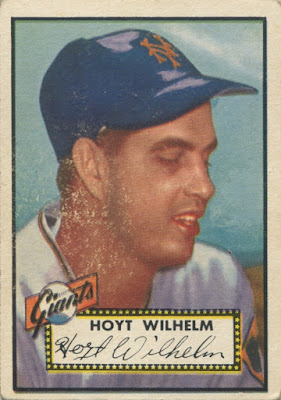 ...I immediately bust them out of those horrid plastic cases, because baseball cards are meant to be touched and experienced, not observed.

And all I can say is: my god, it's every bit as beautiful as I thought it'd be.

I'd like to say I always knew that I'd eventually own a '52 Hoyt, but I honestly don't know if that's true. Beat-up copies don't come on the market very often, and even those go for north of $500 in most cases. I long ago resigned any hope of owning one in good shape -- they routinely sell for four-figure sums. My dad, like me, has constantly scoured the internet over the years, looking for a worn copy of the white whale without much luck.

That is, until last week, when he stumbled upon a copy with a fairly well-conditioned front... 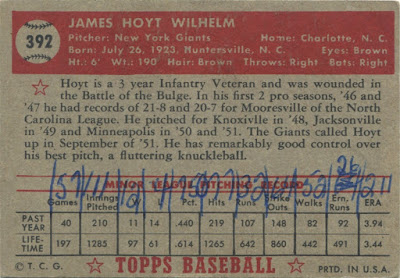 For my money, I'll take writing on the back over just about any condition flaw in the hobby. While I love card backs, my collection is displayed front side-up in my binders, and that's really the selling point for me.

At this point, there's really one thing left to do: the thing I've wanted to do each and every second of the last twelve years of my life... 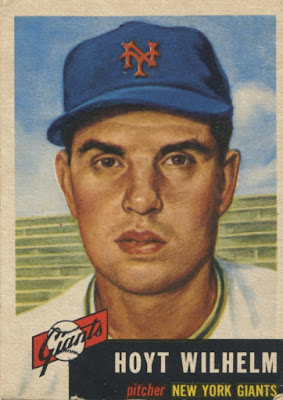 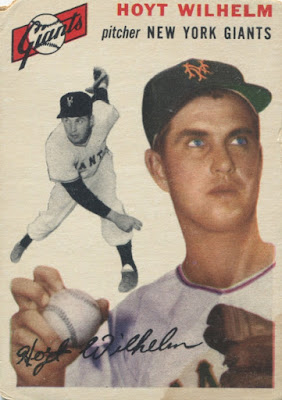 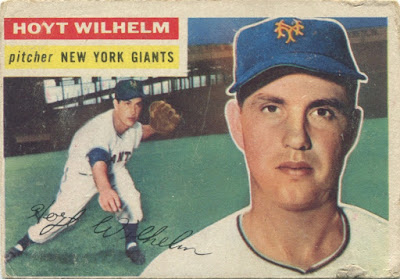 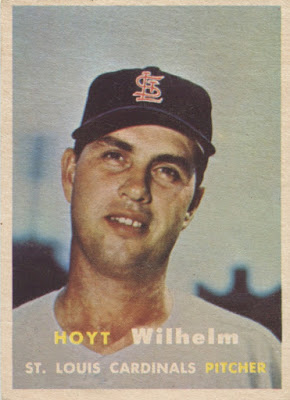 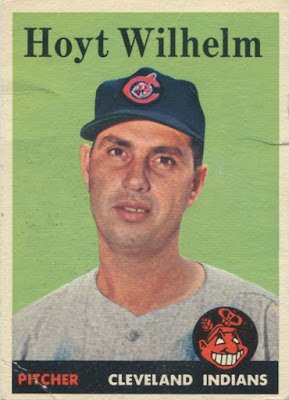 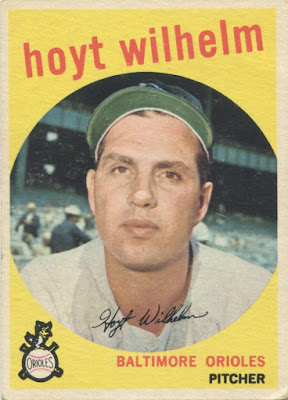 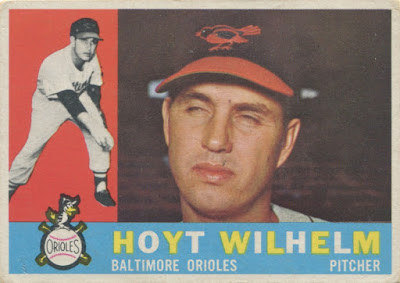 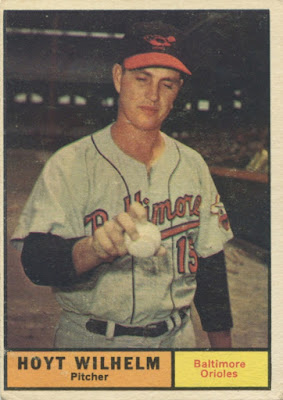 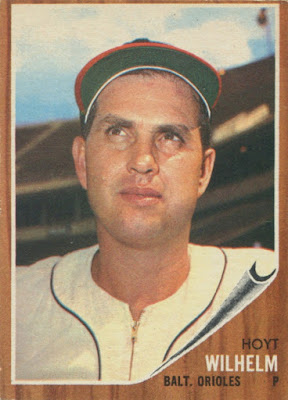 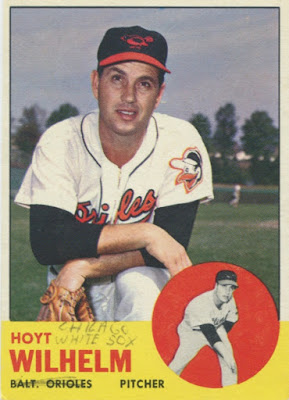 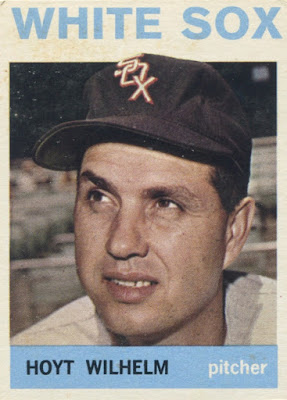 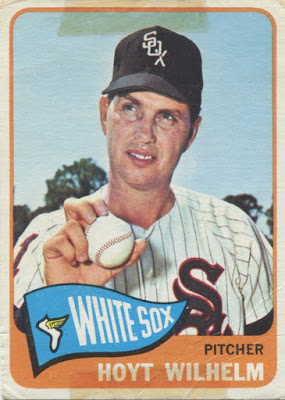 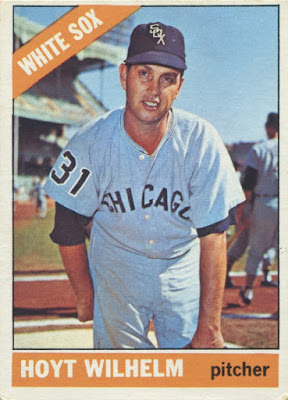 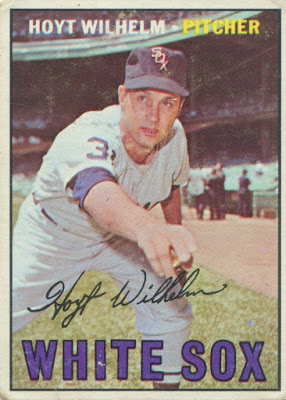 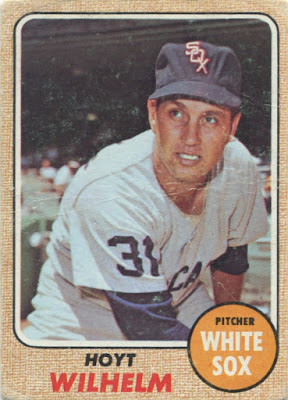 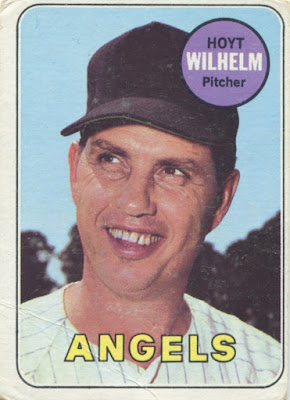 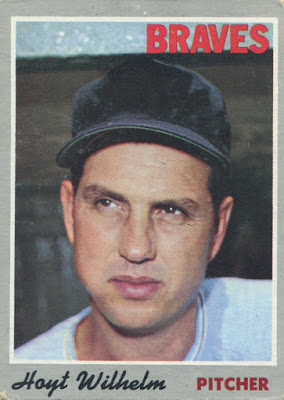 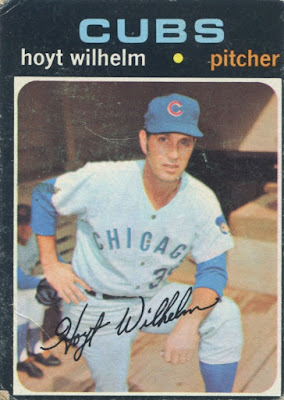 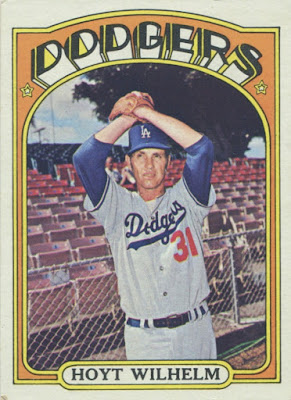 ...and that's to show off what is now a COMPLETE TOPPS SET OF HOYT WILHELM, from 1952 all the way up to '72 (though Topps completely left him out of their '55 checklist, for some reason).

From the Giants to the Cardinals to the Indians to the Orioles to the White Sox to the Angels to the Braves to the Cubs to the Dodgers, I have them all -- all the Hoyts are mine.

After he'd given me the Hoyt, my dad asked me what my next white whale was going to be. And I honestly had no answer, because Hoyt had been the only white whale I've ever known: I don't remember a time when it didn't represent the ultimate chase in this hobby, when it hadn't sat at the cloudy mountaintop of my ideal collection.

So, for posterity, I'd like to let it be known that on September 20th, 2017, I officially speared what was and always will be my ultimate white whale: a 1952 Topps Hoyt Wilhelm rookie card.

I love you, Dad -- and who the heck knows what I'd be doing without you and this wonderful hobby you've passed down to me.
Posted by Nick at 6:04 PM

Congrats on spearing the whale Nick!

Congratulations! What an amazing acquisition!

I'm sure that something else will soon fill that vacuum of ultimate white whale - maybe it won't be quite the same level of desire, but some target will ultimately rise to challenge your will and wallet.

Wow... I'm speechless! Congrats on reeling that one in! It's beautiful!
Oh, and so glad to hear you broke it out of its encasing!

This is why I love the card blogging community. This isn't my white whale,and I've never once given any thought to this card, but I'm just as excited for you as I would be if I had just gotten something great for my own collection. Congrats, Nick!

Awesome Nick! Even better that it's connected forever to your Dad.

Me: Dad, my white whale is the 1952 Jackie Robinson card.

I actually bought the '54 Hoyt at a card show earlier tis year, leaving me needing 8 of those cards above, of course including the '52. I don't know that it's my white whale, but certainly among the cards I would most like to own....

I was just as excited to find it!!

A little background...as I learned from Nick (though he said it's a little different with high-dollar cards such as this,but what the hell..),F-P condition runs about 10% of VG or better...what the guy had it listed for was about 50 bucks over that...so I made an offer based on that...the guy immediately returned my email (a sign to me that he really wanted to unload it) with another offer...which was basically a little more than adding the shipping cost..and BINGO!!

Oh,one more thing...I was The Best Dad Ever before I got him the card,hahaha!!!

Awesome card! Super excited that you were able to add it to your collection! You've got an amazing father, not because he buys you things, but because he knows what's important to you and goes out of his way to make you happy!

That is awesome. What is your Dad's "white whale" in records? Maybe you could find it on the blogosphere.

Congrats! And pretty cool of your dad too!

Congrats! One of the few guys (and maybe only Hall of Famer) whose rookie and last card are both high numbers.

Congratulations Nick! An amazing card I would love to have in my Giants collection some day. I am totally with you on the best "defects" on a card being writing on the back. For a vintage card like this I almost think it adds to card vs. detracts from it.

Hoyt has a 1955 Bowman card (#!). Perhaps he had a Bowman exclusive contract for that year (as was the case for many players such as Mantle).

Awesome to see that you ended up with the card! I'm with you, writing on the back is nothing. It actually allows us to end up with cards we otherwise might not. There's a 52T common high number I want (he played at my alma mater), but brutal copies are still $100+. I'm sure you'll be on cloud nine for quite awhile.

Kudos Mike! So cool. Nick, look up and smile cuz Hoyt has to be looking down and smiling back!

Aren't you glad I didn't steal your dad, like I always threatened to do? Happy for you. Happy enough to threaten my status in the witness protection program I'm pretending to be a part of. Well deserved whale, my friend.

Congratulations! Wish my father would hook me up with a white whale. Oh well... I still think he's the greatest dad in the world.

What an awesome gift! Enjoy that, Nick!