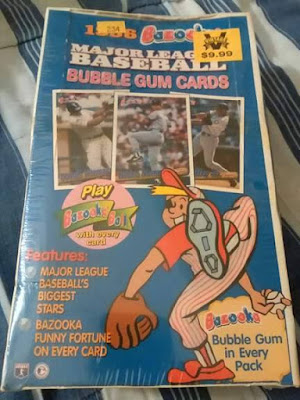 The local flea market can be -- and often is -- a prime example of your classic good news, bad news scenario.

My trip there with my dad this past Sunday kept with the pattern. The good news was that I got to go in the first place, as time walking through those aisles is always a good way to clear the mind. The bad news was that I had to sneak it in before a long shift at work, which meant repeated glances at the clock to make sure I wasn't running late.

This was a shame, because there actually quite a few people with cards at their tables on Sunday. Of course, some were the standard late '80s/early '90s rubble, while others were okay cards that were woefully overpriced. Bad news: one guy -- who repeatedly bragged about the quality of the cards at his table -- wanted ten bucks for a standard Topps insert of Yoan Moncada. (I would've paid 50 cents for it, at most.)

Good news: that same vendor also had an unopened 36-pack box of 1996 Bazooka, which he let me have for the fair price of $15. 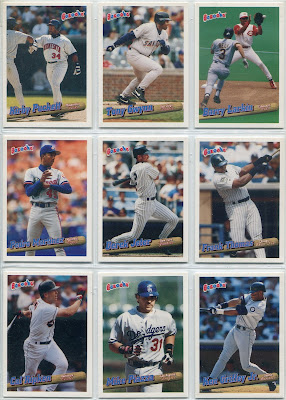 Semi-bad news: I'd be lying if I didn't say I felt a teensy bit of buyer's remorse after the fact.

Not so much because of the cards themselves, which are a lot of fun and tough to find anywhere else. Almost everything I pulled was new to me, and the checklist features its fair share of stars.

No, my trepidation wound up involving the mechanics of the set more than anything. It's all base cards: no inserts, no parallels, nothing. And that would be fine if this was a 900-card Topps Total-esque set, but it's not: 1996 Bazooka features a small 132-card checklist, which meant that I was pulling doubles and triples of some cards by the end of it all (though I did somehow fall a few shy of a complete set).

I started to think that maybe that $15 could've been better spent elsewhere. 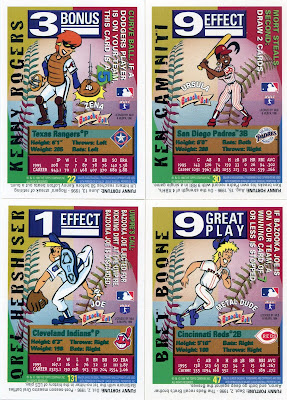 But if I had to do it all over again, I think I'd still buy the box: I mean, it's a whole lot of fun to open 36 packs of almost any product, much less one as obscure as '96 Bazooka.

And like most other kid-centric sets of the era, the backs of these are awesome (though they feature some kind of card game that I doubt many kids actually played). 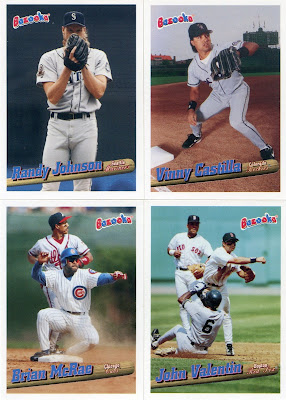 What's more, there are quite a few great cards in the set, a few of my personal favorites seen above.

Between this and the box of Pacific Online I unearthed a couple months ago, the flea market has certainly been a haven for cheap wax this year. 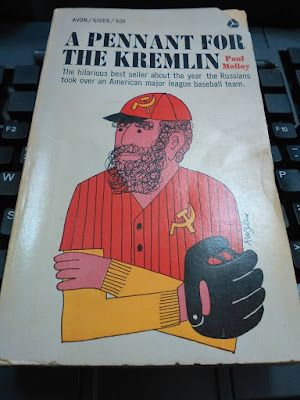 While it's not card-related, I figured I might as well show off this dusty old novel (which I'd never heard of) I found for a buck early on in the day, one that combines my loves of books and baseball.

Worth every penny for the cover art alone. 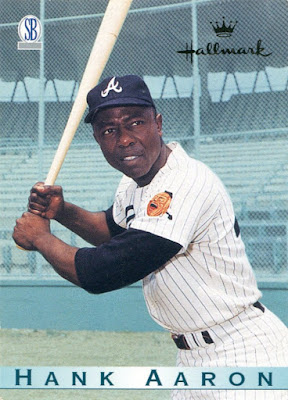 That same paperback vendor had a few cards at his table, and although there wasn't much of note, I did manage to dig up this nifty Hallmark oddball of Hammerin' Hank for a buck. 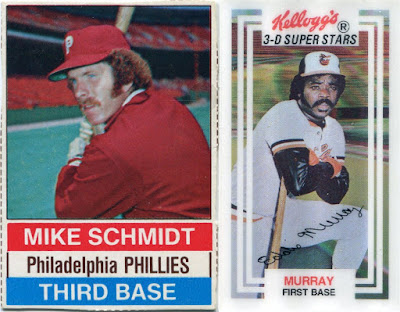 The Oddball Paradise guy was back, and I took it upon myself to go ahead and purchase a couple cards I passed on during my initial dive into his inventory.

Five bucks netted me this pair of sweet-toothed Hall of Famers. 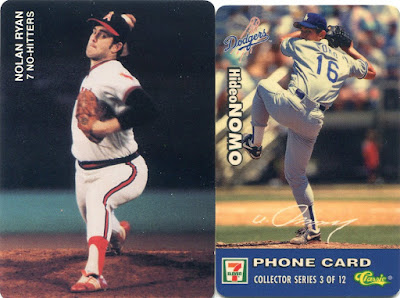 Good news: I stumbled upon a new guy with cards about midway through the day, and his boxes were about as joyously random as it gets. 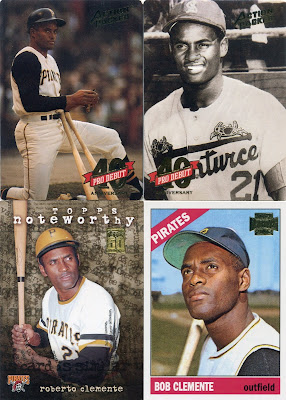 Bad news (and this is a common tale at the flea market): none of his cards were priced.

I picked out a couple dozen cards from his wildly unorganized box, and I was quoted $12 for the lot. I balked, and he lowered it to $10. Though it was a bit more than I wanted to pay -- nothing I picked up is much more than quarter box material at most card shows -- I accepted because, after all, you can't always expect to find card show prices at flea markets.

Try as I might, I just couldn't pass up the opportunity to add a Hideo Nomo phone card and a quartet of new Clementes (among others) to my collection. 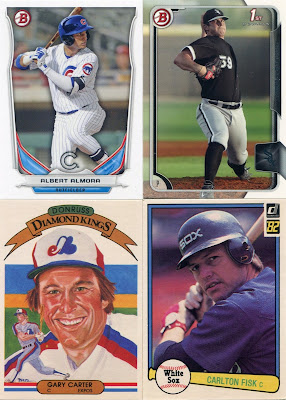 Good news: after a few weeks of being completely sapped of inventory, my regular card guy had cards again!

Bad news: his stock had been mostly ransacked by the time I arrived, though I did manage to salvage a handful of goodies with a stack of cards from his 5/$1 bins. 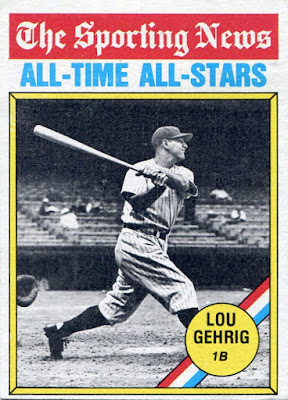 Originally priced at $3, the guy let me have this Gehrig from his glass case for just two bucks.

I'd have to check to make sure, but I think this and the Babe Ruth were the last cards I needed from the mid-'70s Topps Sporting News All-Stars.

With the Iron Horse out of the way, look for The Babe to be a prime target at my next card show. 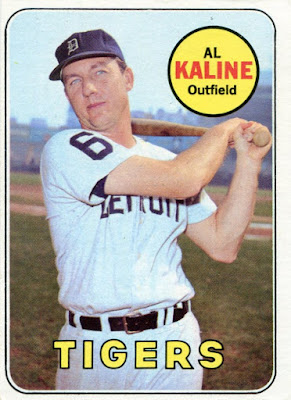 I got another insider's deal on my second and final glass case purchase of the day: this '69 Kaline became mine for a mere five-spot (marked down from $7).

For me, Al Kaline has always been a good in-between guy to chase. He's a pretty big name, but his cards don't tend to run as much as other stars from his era, which is why I get so excited whenever I can score another of his vintage beauties on the cheap.

I don't consider myself a glass-case collector, but they do pay dividends sometimes. 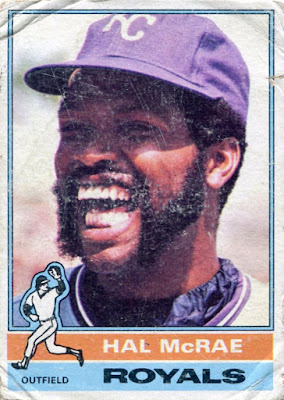 Good news: THE PENNY CARD GUY WAS BACK!

Bad news: he didn't have the penny cards (audible sigh). He told me he'd been running late on Sunday and simply didn't have time to pack all those penny boxes for the trip, which is quite understandable because did you see how much he had?

He did, however, bring a few small stacks of cards with him on Sunday: I picked up about a dozen singles for a mere three bucks, including this glorious Hal McRae which I somehow didn't already own. 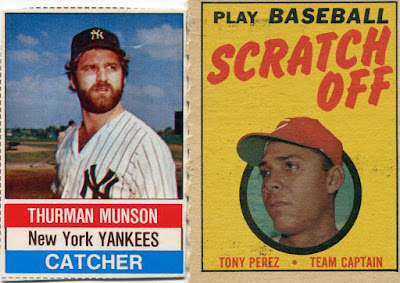 Better news: weather permitting, he said he'd bring the penny boxes for me this coming Sunday.

This set off a rapid series of events that ended with me switching shifts at work in order to have Sunday off, because those are the lengths I'll go to in order to have another crack at those penny boxes. Needless to say, I'm already counting down the days...but in the meantime, I still have my finds from last week to tide me over until then.

While they might not have been a penny each, I couldn't much complain with the end result: notably a nifty Tony Perez oddball and the final card I needed to complete my run of Thurman Munson's Hostess cards. 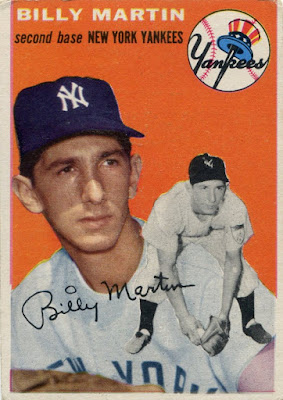 This is just about the last thing I'd expect to find at a flea market -- even one as great as my local haunts -- but against all odds, there it is: a real-live '54 Billy Martin, which predates the oldest card I'd had of his before Sunday by a whole five years.

The penny-card guy is also, as I learned, a big vintage collector, which explains all the older stuff (including a lot of higher-end material) he had on display this weekend. The Martin was originally priced at $40, but he sliced the price in half for me. And to make the good news even better, my dad (against my insistence) decided to front me the $20 for Billy, since my dad grew up idolizing Billy Ball in the '70s.

It was a truly memorable day at the flea market, but I had to face the facts: my time was up, and as much as I would've liked to have spent the whole day roaming those aisles, it was time to go to work. 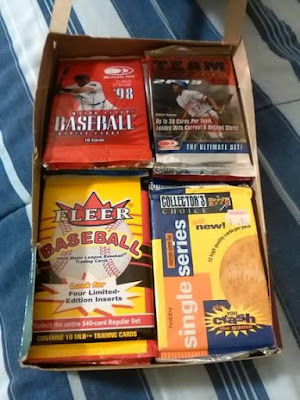 That is, until the wax pack gods decided they had one little surprise left in store for me.

But that's another story all together (insert cliffhanger).
Posted by Nick at 6:00 PM

That '69 Kaline looks to be in pretty condition for card coming up on being 50 years old. Nice find for a five spot.

Love the handlebar mustache on the McRae card! Those packs look fun. Can't wait to see the next post.

I had a great time with ya,boy!!...Sunday looks like it could go either way,weather-wise...wish us luck,everyone!!

I too probably would have scoffed at paying $15 on the Bazooka box, especially since you were pulling dupes by the end of it ... but still, it looks like it was a fun break. I have yet to make it to the flea market this year and I really need to before the good vendors pull out for the winter. Looks like you hit the motherlode with those packs!

What you did with 96 Bazooka, I did with 91 Studio. Fun to rip a full box, but man, collation was terrible. Want to trade dupes?

A. So many awesome cards = a great flea market haul.

B. That Nomo is fantastic. Had no clue that 7-11 produced baseball phone cards.

C. Congratulations on locking down that Billy!

D. Is that a box full of unopened packs? Can't wait to hear the story behind those.

I thought that Vinny Castilla was a good candidate for the Ivy Frankenset but I looked at what I have in the #71 slot already and it'll be a tough call! I'll have to pick one up, get back to blogging and put it to a vote...