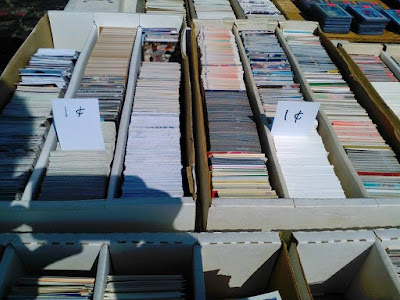 Between white whales and card shows, this has sure been one glorious whirlwind of a week for my collection.

One thing that got a bit lost in the chaos was the fact that the penny boxes were back at the flea market a couple weekends ago. These, as you might remember, took me completely by surprise during an otherwise routine afternoon a while back, and despite purchasing over 500 cards the first time around, I still hadn't finished going through the guy's inventory.

I mentioned that this same vendor was back at the flea market during my last trip a few weeks ago, only without the penny cards. Though I scored a nice '54 Billy Martin from him that day, I basically begged him to bring the penny boxes back the following week, because with cards as great as his, I just had to look through them all.

Flash forward a week later, and there they were: the penny boxes were back! 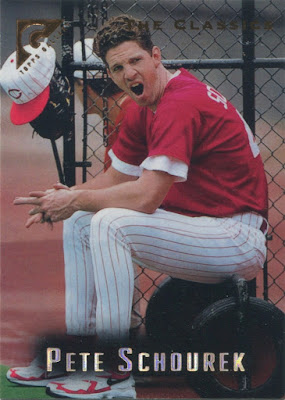 Any cases of the early-morning yawns were immediately quelled by those glorious 1¢ price tags. 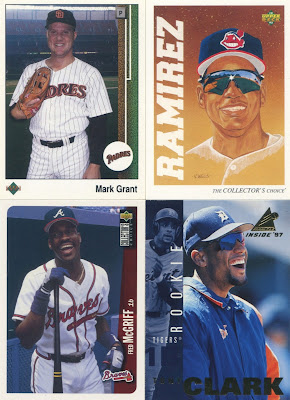 It was all smiles from here on out. 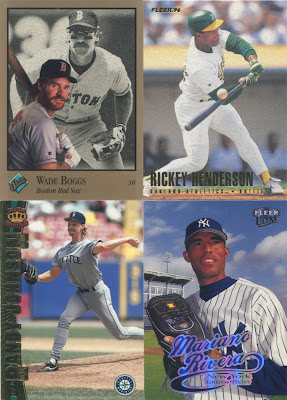 Believe me when I say that I scoured every last penny card this guy had -- even rehashing some of the same ones I dug through the first time around a couple months ago -- because I'm a completist when it comes to this sort of thing.

With a situation like this, I can't bear to think of what I might be leaving behind, and I can sleep a little better at night knowing I didn't abandon this quartet of superstars in those poor penny boxes. 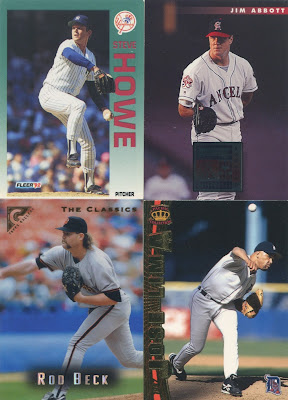 And while big names like Rickey and Mo are great, for me the penny boxes just about hit their peak with the more secondary stars like Shooter and Jim Abbott. 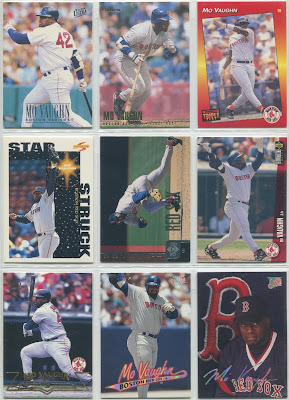 And hey, the penny boxes even inspired me to start a new player collection.

Mo Vaughn has long been one of my favorite players of the '90s, but for whatever reason, I've never chased his cards with much vigor. I'd grab a few here and there if I felt like it, but overall, I'd describe my Vaughn collection as passive, at best. But after seeing Mo after Mo after Mo pass me by in the penny boxes, I wondered: why am I not collecting this guy?

I didn't have a good answer, and thus, a player collection was born. 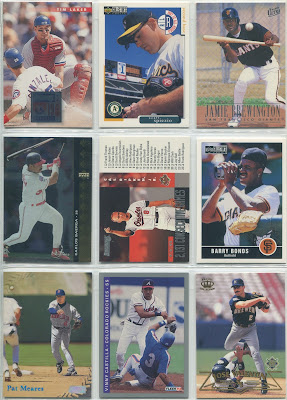 Mini-collection hits for a penny a pop, and what a feeling that is. 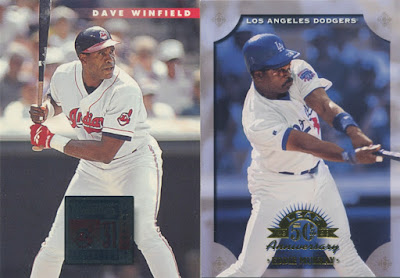 These filled a couple gaping holes in my sunset collection, and I sometimes forget that both Winfield and Murray both played well into the '90s. 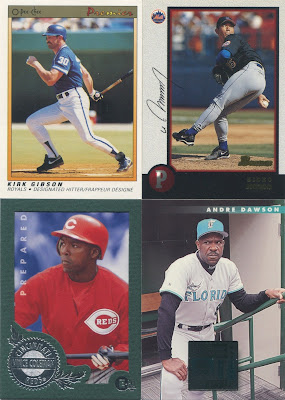 Some prime Short Term Stops here, including one of the extreme few cards I've ever seen of Vince Coleman's forgotten stint with the Reds. 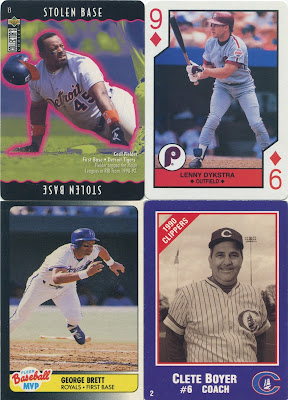 I feel a little better about the world knowing that penny-box oddballs actually exist. 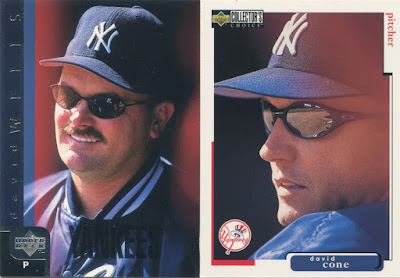 Seeing the same optometrist, are we? 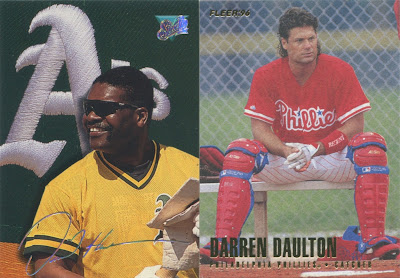 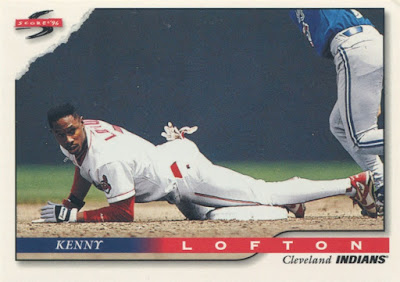 And just when I thought I'd seen it all, lo and behold: a Dime Box Dozen need.

Yup, Kenny here was indeed on my DBD list before this second foray through the penny boxes. Before last Sunday, I'd had a Dugout Collection parallel of this one sitting in my Cleveland binder for ages without ever reeling in the standard base card.

All it took was a single penny to put years of frustration to rest. 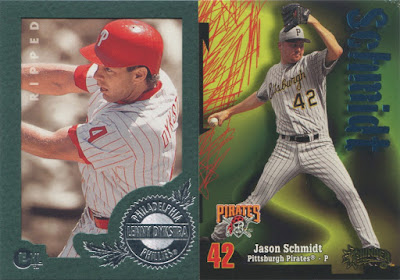 These penny boxes were overwhelmingly '90s-heavy, so stumbling upon some weird and wacky cards was pretty much inevitable.

I still haven't the slightest clue what I'm seeing on that Skybox Thunder design, and E-X did their best to provide their subjects with an apt adjective in an effort to make their brand stand out (though in the case of Lenny Dykstra, RIPPED = 'ROIDED). 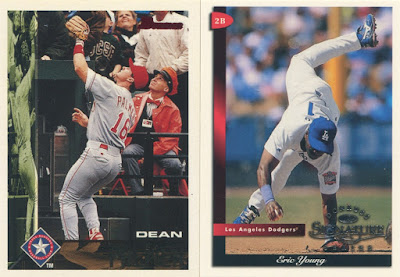 Sometimes '90s cards can be quite left-of-center, just like the train-conductor wardrobe of that usher (I assume?) sharing the spotlight with Dean Palmer there. 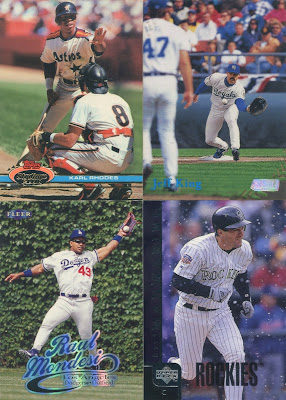 Then again, whether they come in vertical... 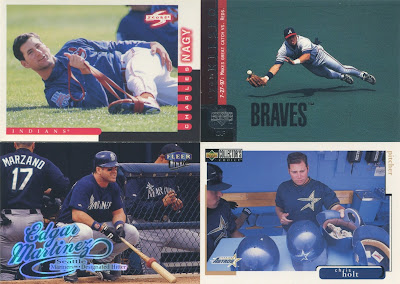 ...or horizontal form, some '90s cards are just objectively beautiful. 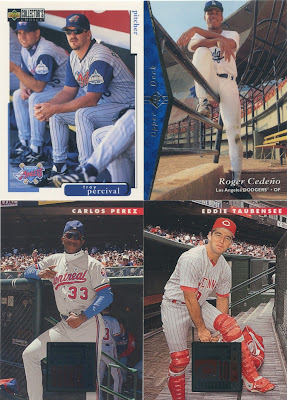 Some '90s cards capture the often-ignored beauty of the dugout. 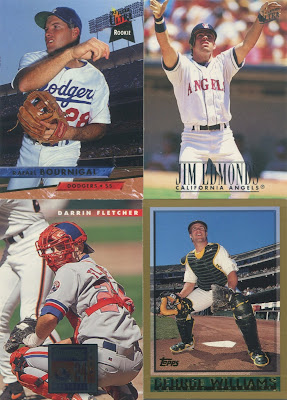 Finally, the penny boxes helped me find greatness in a few '90s sets I'd previously ignored or just plain disliked.

I doubt I'll ever come around on '96 Donruss or '98 Topps, but it's good knowing that with a little effort, there are bright spots to be found in even the darkest corners. 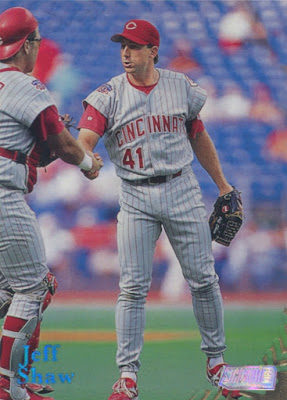 About 45 minutes and one harsh neck sunburn later, I had done it: I'd finally conquered the penny boxes.

The final tally for the day came to a whopping 450 cards, mine for the insane price of four dollars. It boggles my mind to think that, between my two trips to this guy's table, I added right around 1,000 new penny cards to my collection.

From there, the Penny Card Guy and I shook hands -- and would you believe it, he actually thanked me for taking the time to look through everything he had. No, no, sir, thank you!

I am honored to have had the privilege of experiencing your penny box heaven. 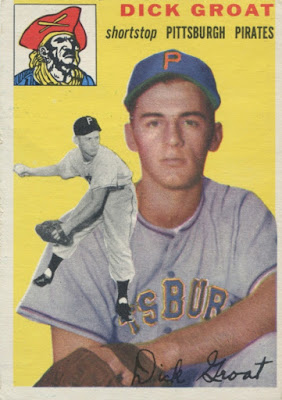 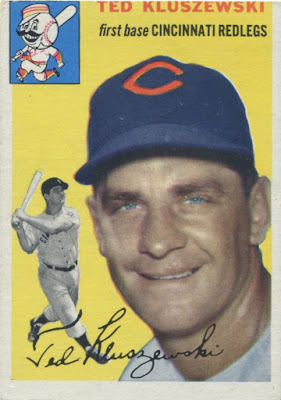 (And in perhaps the most noteworthy aside in blog post history, I ended up buying these two '54s from the Penny Card Guy's higher-priced stuff to go along with the 450 penny cards -- as well as the Billy Martin I purchased the last time around.

Talk about the best of both worlds.)
Posted by Nick at 6:40 PM

Nice haul of penny cards there - I especially like the Mo Vaughn cards. And the pair of '54s are awesome!

That Clete Boyer is my fave from your day's haul...that guy saved our day,as the rest of the flea market was pretty weak...

Penny Boxes? Every time I think you've found the best deal ever... you find a way to top it somehow! Unbelievable!

My kind of shopping, lol.

Nice haul! That Rafael Bournigal card brings back memories. In 1997 he lived in the same town as I did and I ran into him at the YMCA. I asked if I could run home to get some cards for him to sign (I lived maybe a block and a half away). He offered to drive me, so I hopped in his car, ran into the house to get his cards, and he signed them (one of them being that '93 Ultra card) and took a picture with me. A few year later, while working as a cashier at Publix, he would come through my line and talk, and just this year I sent him a ttm autograph request with the picture I took years ago and he signed it and wrote a nice note back saying he was glad to see I was doing well all these years later. You should totally write to him, I'm sure he'd sign the card for you.

Jeremya1um, that is an awesome story.

And as for your Mo Vaughn collection - it's on! I'm going to pour through my tradeables and I'm sure there are some funky Mo's in there.

You are the Master. Plain and simple. I bow to you! The Daulton is gorgeous. Apparently I need to reinventory his cards because this one is not in my binder. Argh!!!