The base card middle finger 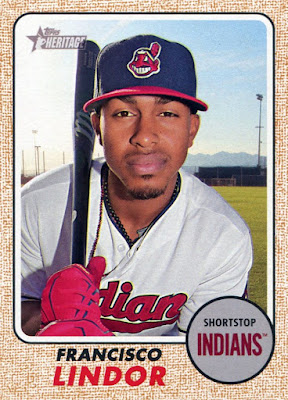 There are few more frustrating feelings in this hobby than having a simple base card elude you for a long period of time.

My collection revolves around base cards, so I find it especially stress-inducing when such seemingly simple acquisitions pass me by. Seeing such a gap in my binders is like having the baseball card equivalent of a middle finger waved in my face.

And if a player I collect has the (mis)fortune of being included as a short-print in a Heritage checklist, well you can just about kiss that one goodbye, because Heritage SPs seem to immediately fall off the face of the earth. But thanks to Kerry of "Cards on Cards" fame, that short-print number fell by one when he offered up a spare copy of this Lindor SP from this year's Heritage.

I quickly pounced on it because I had the feeling I'd probably never see it again if I didn't. 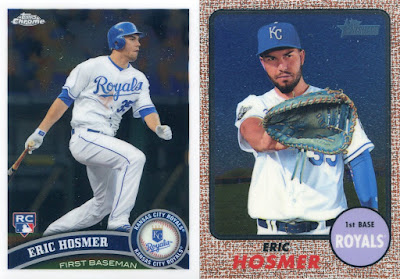 But as has been the case with all the trades I've made with Kerry, he packaged the Lindor with a healthy stack of other friends.

These two represent perhaps an even more stressful version of The Base Card Middle Finger: owning parallels of a given card without the base version. While I've gotten more patient with my collection over the years, this is a frustration that has never quite faded.

Both of these are currently sitting all alone in my Royals binder -- the Heritage Hosmer being a short-print, of course -- waiting for the day they'll be joined by their base card spouses. 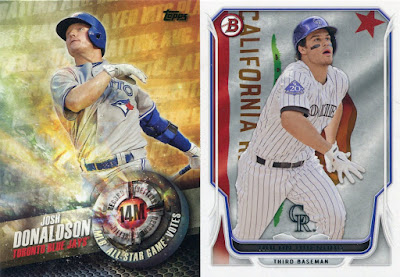 More non-base of guys I collect, although I'm happy to report that I did already own the standard Bowman version of that Arenado. 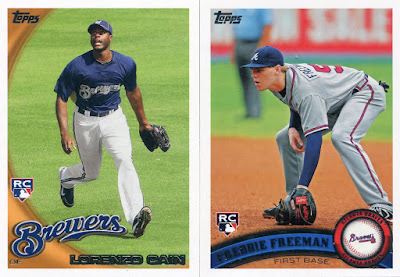 From my own experience, early-decade Flagship rookies of bigger names have become increasingly harder to find these days, so I'm ecstatic when I have people like Kerry graciously send them to me out of the blue. 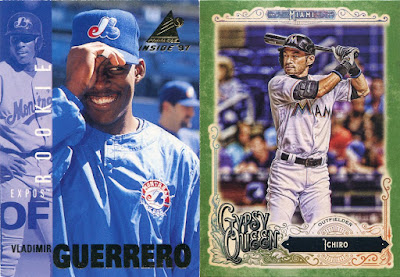 Obscure-brand '90s base also suffers from the aforementioned Off the Face of the Earth syndrome, so kudos to Kerry for sending me a Pinnacle Inside (who remembers that brand?) Vlad that likely never would've ended up in my collection otherwise.

Also, am I the only person who seems to like the green-bordered GQ parallels more than the base cards? 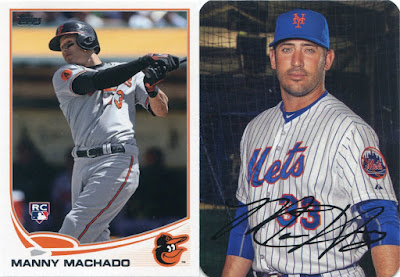 A couple more for the player collections.

The Machado is a sly fox trying to disguise itself as a simple base card -- it's actually a Factory Set rookie variant from 2013 Topps (though I do own his standard rookie as well, thankfully). 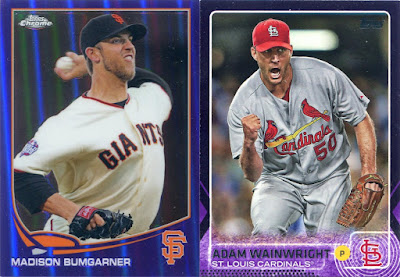 But fact is seeing that Bumgarner fall out of Kerry's stack paradoxically caused both excitement and despair. Excitement because colorful refractors are always welcome in Dime Boxedonia, but despair because in the saga of The Base Card Middle Finger, that specific Mad-Bum is pretty much the coup-de-grace.

Seriously, I've found multiple variants of that one with ease without the boring old base card ever presenting itself.

But unbeknownst to me, a surprise was waiting just few cards later in Kerry's stack... 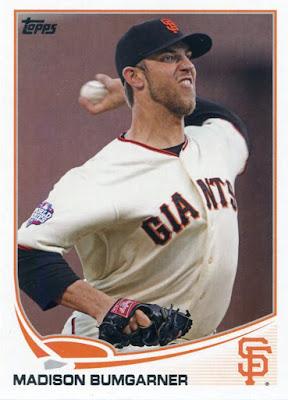 Even with all the terrific inserts and parallels Kerry added to my binders, this -- an ordinary, common base card -- was by far my favorite thing he sent me because of the immense weight it lifted off my shoulders. 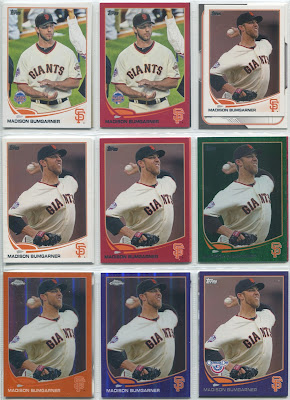 For the record: I had the mini, red parallel, emerald parallel, orange refractor, purple refractor, and Opening Day Toys 'R' Us purple parallel(!) of this one before I tracked down the run-of-the-mill base card.

I don't exactly know how that happened, but at least now I can show off this beautiful binder page without that Base Card Middle Finger being constantly waved in my face.
Posted by Nick at 6:04 PM

First of all, Kerry is awesome to trade with. He and I have sent cards to each other quite a few times over the years. I have many cards that are "middle finger" in nature that are eluding me for my Indians team sets. I recently received a box of cards and at the very front was one of those cards that had eluded me for a long time. I was beyond excited for that one "common" card. Lastily, keep up the awesome blog! Love reading it.

Those 2013 Topps Opening Day purple parallels are tough to track down. I still need the Votto. Guess you could say that's the card that's giving me the finger!

Let me know if you have any other base cards giving you the middle finger. I've got so many extras. I definitely have extras of the Guidry and Baylor from your Dime Box Dozen - may have one or two others as well.

I guess we all have our version of middle finger cards. Heritage SP's are like my students who don't write their names on their assignments. They kinda bug me... but at the end of the day... I don't really let them bother me. I think right now my middle finger cards are the reckless use of the rookie card symbol on trading cards. I truly miss the good old days when a player's first trading card(s) produced and released in packs were considered rookie cards.

All I see is Bumgarner and his bunny teeth..Got to love him!