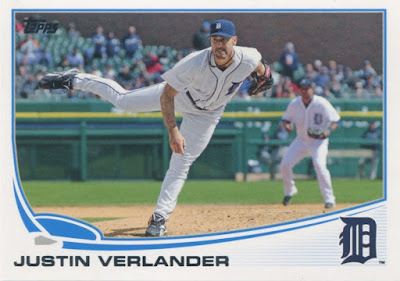 I'm not sure there's a person on this earth I envy more than Justin Verlander.

Dude's been one of the best pitchers in the game during most of my baseball-watching life. He's won a Cy Young. He's won an MVP. He's thrown two no-hitters. He's engaged to Kate Upton. He just got traded from a team going nowhere to a team with a dazzlingly bright future. He's pitching in the World Series right now. And did I mention Kate Upton?

On top of all that, Verlander has been treated kindly by card companies during his career, which makes him a prime candidate for today's Top Five post. 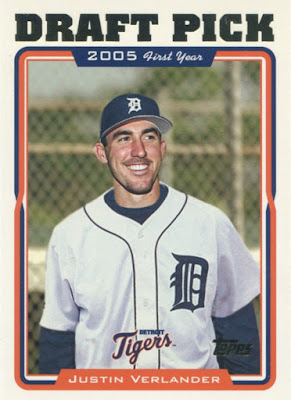 I'm not sure what my first Verlander card was, but there's a good chance this might've been it.

As is the case with most rookies I pull, I had no idea who this Verlander fellow was back when this one fell out of a pack I opened over a decade ago. It didn't take long for him to become a household name. Drafted in 2004, he'd make his big-league debut the very next year and win 17 games in '06, his first full season.

Judging from that smile, maybe Verlander knew big things were in his future. 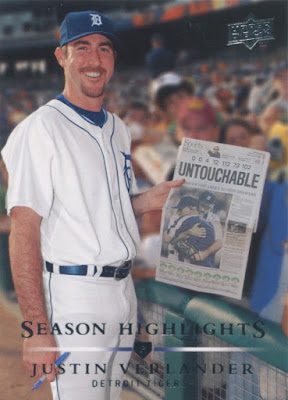 As I mentioned earlier, Verlander has thrown two no-hitters, and both have been well-chronicled in the world of baseball cards.

His first -- spun against the Brewers on June 12, 2007 -- is documented on this gem from Upper Deck in the form of a good old ink-and-print newspaper Verlander appears to have just signed for a fan. (Note the lottery numbers and weekly weather forecast as well.)

Plenty of cards have borrowed designs from newspapers in the past, but how many can say they feature an actual newspaper? 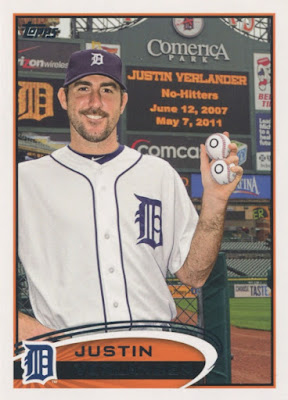 This neat photo-variation SP is the only card I own to honor both of Verlander's no-nos.

It's also one of the extreme few Flagship short-prints I've ever found in a dime box. 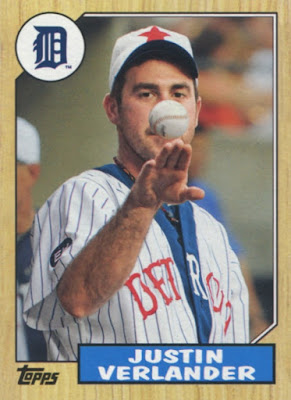 Need I explain why this card is so great? 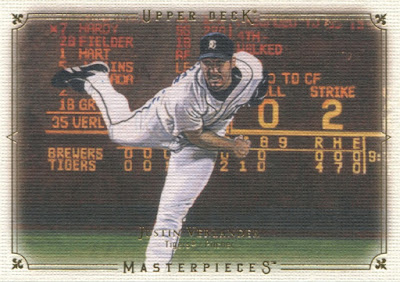 Perhaps the biggest tragedy of Upper Deck's baseball card demise is the fact that we didn't get to see more of UD Masterpieces.

Even a decade later, the brand still gets talked about on a frequent basis, a legacy even more improbable considering it only lasted two years. This Verlander is one of the scores of, well, masterpieces included in those legendary checklists, using a scoreboard capture of the final pitch he'd throw in his first no-hitter as the backdrop for what remains one of the most aesthetically pleasing cards in my collection.

An easy choice for our generation's Luckiest Man on the Face of the Earth.
Posted by Nick at 4:53 PM

He probably knew big things were in store- just not Kate's big things.

That "1987 mini" shows Verlander with an orange star on his cap... a nice little bit of foreshadowing!

Normally UD Masterpieces would trump everything... but I think I'd go with that 2013 Topps card as my #1. That's a great looking card.

I've enjoyed watching JV pitch in 2017. I lived in TX for most his years in Detroit so missed out on many of his best games. I need to add the 2012 SP to my collection!