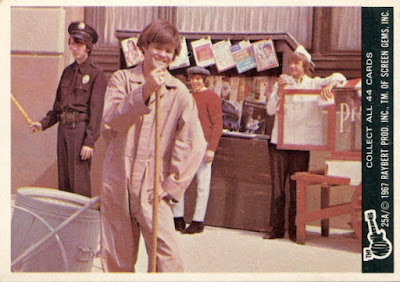 Music and baseball have been my two loves for as long as I can remember.

While I haven't devoted a ton of time to music in the history of this blog, make no mistake: it's just as big of a passion for me as baseball. And that's why I get all giddy inside when someone like Bert of "Swing and A Pop-Up" fame decides to send me a whole bunch of music-related stuff -- specifically, Monkees cards.

The Monkees are just such a strange story. A group of four strangers -- Mike Nesmith, Davy Jones, Peter Tork, and Micky Dolenz -- put together for the sole purpose of starring in a TV comedy about a struggling band, only for their show to become wildly successful and leave them unhappy about lack of musical control, which in turn led them to completely break free from the tube and actually become a real band.

It's still a massive shame they aren't in the Rock 'n' Roll Hall of Fame. 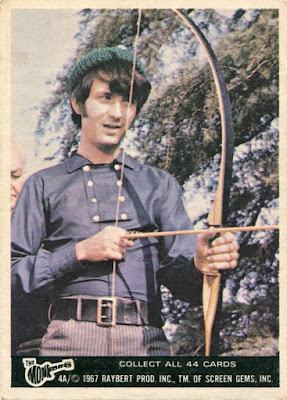 The Monkees have long played a starring role in my life.

They were a favorite of mine when I was a wee lad, fell almost completely off my map during my late childhood/adolescence, only to enjoy a massive renaissance in my life in recent years after stumbling upon a few late-night cable reruns not long ago. These days, they receive more air time on my bus/train commutes than almost any other band out there.

In some ways, I guess I was destined to become a Monkees fan: I've mentioned it before, but my dad missed his one chance to see Mike Nesmith in concert because my mom was heavily pregnant with me at the time.

I'd be born just days later. 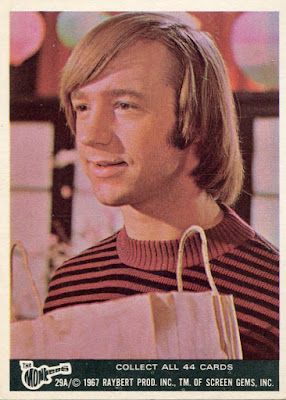 One of my pipe dreams has been to assemble a master set of Monkees cards.

They were issued in both 1966 and '67 -- printed by a little-known brand called Donruss well before they'd break into the baseball market -- and all the ones Bert sent come from the latter checklist. While I've never put a ton of concerted effort into chasing the set, I scoop them up at card shows when I can (and will always take extras anyone might have lying around).

And now I'll shut up and let the Monkees do the rest of the talking tonight. 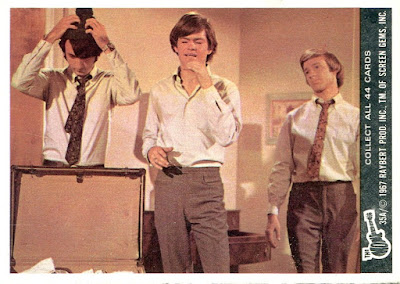 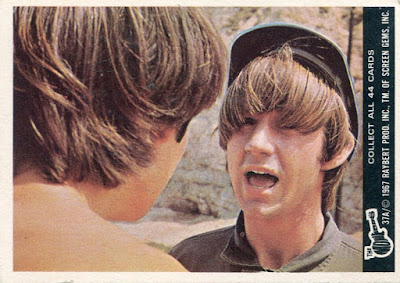 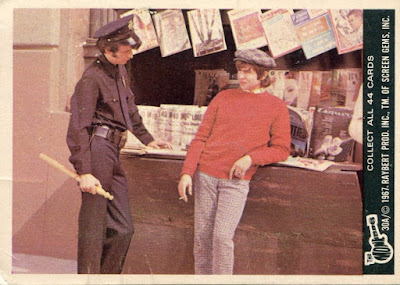 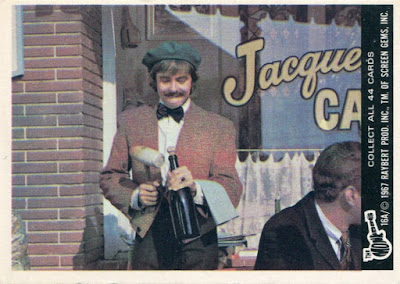 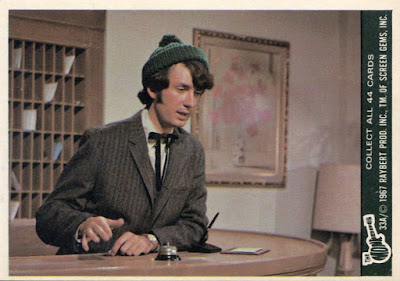 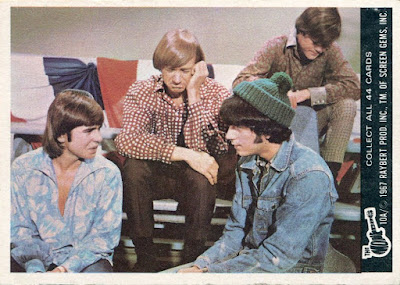 The Monkeemobile! When I was 6 or 7, the show was already in reruns. I had a crush on Mike Nesmith. He was so nerdy. I have a few cds and some vinyl, still enjoy the music. Had the opportunity to seem them in concert a few times, once with the original lineup. I wouldn't go now with Davey gone. Very nice of Bert - these cards rock!

Love those Monkees cards!...and the Monkees have always been a staple of my musical diet...

I've long enjoyed The Monkees, both the show and the music, and I've been wondering how it is that I don't have any of these cards. I'll need to rectify that the next time I go to a show or order off of COMC.

I understand that the set was probably aimed at pre-teen girls, but it's interesting how little of the manic goofiness of the show is captured in the cards. Hell, a pretty decent set could be made using just scenes from the opening credits... Walking in unison, pushing a bed through the street, running from an incoming wave, flying as Monkee-men, all the embarrassed faces Peter pulls when the credits get screwed up.... I'd better stop now, I'm about ready to create a custom set out of this.

You're an old soul, Nick. I'd wager that you're one of the youngest bloggers out there and yet your love for vintage cardboard and music rivals any of the older guys. It makes for good, interesting blog reads.

Cool cards. I haven't listened to the Monkees in years... but they represented a small piece of my childhood.

The Monkees played a role in my musical journey as well. When I was first getting into 60s music, I bought a CD that had their "I'm A Believer" on it. That CD more than any other shaped my musical choices for the rest of my life, essentially. I wish I could find the cover art to scan, but I did take a picture of the CD itself- http://public.fotki.com/ElCaminoBilly/other_hobbies/music/super-cool-60s.html

Always been a fan of good non-sports myself. Interesting stuff indeed!