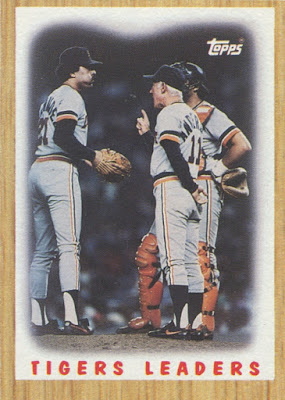 I do my best to keep up with the standings throughout the baseball season, but here and there I'll see a team and say Hold it, since when is THAT their record?!

Case in point: I knew the Tigers were mediocre, but I had no idea just how bad of a year they were having until about a month ago. They finished 64-98, dead last in the AL Central (two games below even the massively rebuilding White Sox) and tied with the Giants for the worst record in all of baseball.

In a way, I guess this makes sense. I've never paid much attention to the Tigers. They're another one of those teams I'm almost perfectly apathetic about. Even though they've had several pennant contenders in the last couple decades, my clearest Tigers memory is probably the year (2003) they finished with a putrid 43-119 record, by far the worst season a team has ever had in my baseball lifetime.

But enough with the negative memories: it's time for the Tigers' Short Term Stops roster, one that features a fun mix of stars and fan favorites alike. 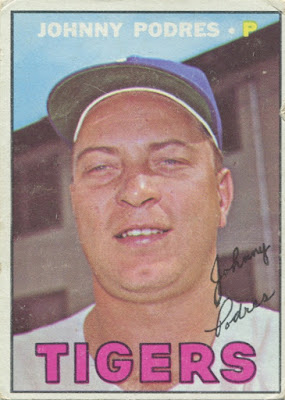 For a long time, I was under the impression that Johnny Podres was a career Dodger.

Not so: Podres spent parts of two seasons with the Tigers after being traded to Detroit by the Dodgers in 1966, and would finish his career as a Padre in '69 (also a member of that Short Term Stops roster). Though the 57 games Podres played in Detroit are more than most Short Term Stop members, the sheer unfamiliarity of it warrants a spot in this post.

It's so unfamiliar that even Topps couldn't get a shot of Podres in the uniform, as this '67 issue -- the only one I've seen of Podres as a Tiger -- most likely features a shot of the pitcher in an obscured Dodger cap. 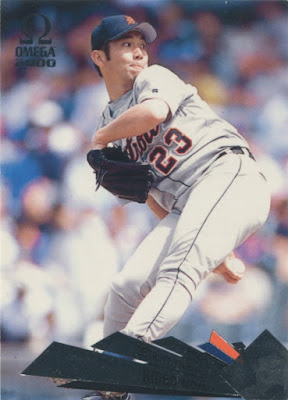 Hideo Nomo was on the downswing of his career by the time he ended up in Detroit, going 8-12 with an unspectacular 4.74 ERA in his only season as a Tiger.

Though only five years removed from his breakout rookie season at the time, Nomo-mania must've seemed like a distant memory by then. 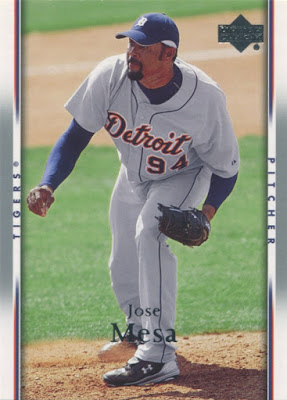 I learned a few things about Jose Mesa while researching this post.

1) Mesa threw at Omar Vizquel every time the two faced off due to some unfavorable things Vizquel had to say about Mesa in his autobiography regarding their time as teammates in Cleveland.

2) Mesa became the second of just three players to wear #94 in a big-league game when he donned the number for Detroit, joining only Felix Heredia before him and Dalier Hinojosa after him.

3) Mesa really sucked as a Tiger, posting an awful 12.34 ERA in 16 games before being released and hooking on with the Phillies, where he'd finish his long and well-traveled career. 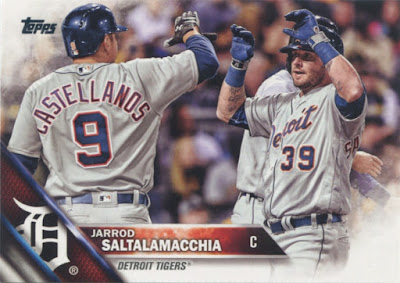 Jarrod Saltalamacchia is the classic hot-shot prospect who enjoyed a fairly long career without ever quite living up to his potential.

Saltalamacchia latched on with the Tigers in 2016 -- his sixth different team -- where he'd hit an anemic .171 with 12 homers in 92 games in Detroit. His 11-year career looks to be over, as the catcher is without a job after spending ten forgettable games with the Blue Jays earlier this year. 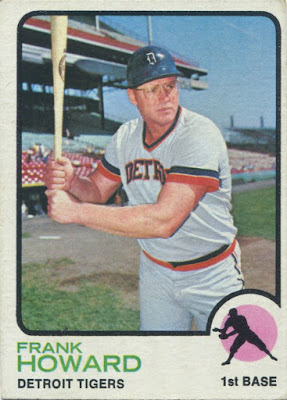 The 6'8" Frank Howard was so massive that the Tigers couldn't get a uniform to fit him when he was first acquired by the team.

Other than that, Hondo had a fairly quiet end to his career, spending part of 1972 and all of '73 with the Tigers and hitting the final 13 of his 382 career homers in Detroit. Interestingly, Howard would also be a prime member of a Japanese Short Term Stops roster should the time ever come to do one of those: following his departure from the majors, Hondo signed with the Taiheiyo Lions of the NPB in 1974.

He wrenched his back in his very first game with the club and promptly retired, bringing his Japanese career to a close after exactly three plate appearances. 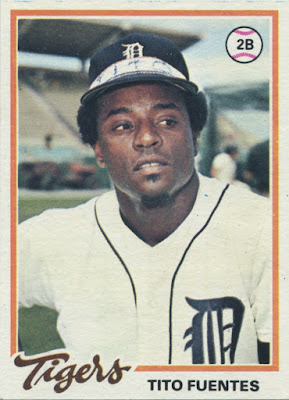 Short Term Stops are usually a place for futility, but not so with Tito Fuentes.

The man who wore his name on his headband hit a sparkling .309 during his only season in Detroit, good for a Topps card ending in 5 the following year -- notable in Topps' caste system of card numbers -- and briefly resurrecting what seemed to be a fading career.

But just like that, Tito was gone again: he retired after being released by the A's just 13 games into the '78 season. 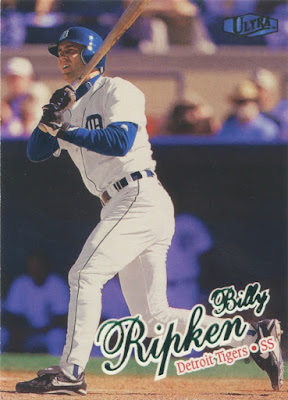 I kinda feel bad for Billy Ripken: after all, he's basically only known for either a) being Cal's brother or b) his infamous '89 Fleer F--- Face card.

What sometimes gets lost to history is the fact that the younger Ripken had a perfectly serviceable 12-year big league career -- though it did, admittedly, come to an unimpressive end after hitting .270 in 27 games with the 1998 Tigers.

Though far from his most notable card, this is an important piece of my collection since it's the only one I own of Billy Ripken as a Tiger. 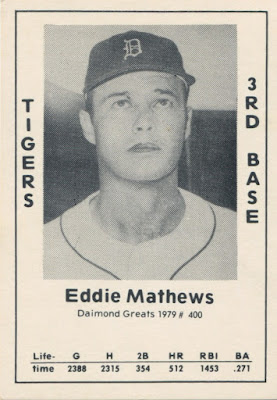 Eddie Mathews was on his last legs by the time he wound up in Detroit, hitting just .225 with nine homers in parts of two seasons with the Tigers to close out his Hall of Fame career.

Aside from his bland '68 Topps sunset issue, this is the only card I've ever seen of Mathews as a Tiger, and it's an odd one. These Diamond Greats oddballs are painfully low-rent -- the backs are blank, and note the misspelling of diamond here -- and were produced by a photographer named Jack Wallin in 1979. I doubt I'd even know they exist had I not found a stack of them in a dime box at my local flea market many years ago.

But generic or not, I'm thankful the set exists, if for no other reason than it produced the only card I've ever seen of Eddie Mathews in an unobscured Tigers uniform. 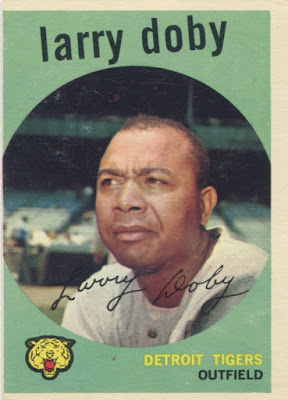 These posts are among my favorite to write because of how educational they often are for my baseball-hungry brain.

I've long known that Larry Doby broke the color barrier in the American League, debuting with the Indians just a few months after Jackie Robinson in 1947. I also knew that Doby briefly played for the Tigers later on, spending just 18 games with the club in 1959 before being sent to the White Sox and providing a veteran presence on the World Series-bound "Go-Go Sox" club that year.

What I didn't know was that Doby was the first former Negro Leaguer in Tiger history, or that he was among the first big-name Americans to travel overseas and play in Japan, suiting up (along with former MLB star Don Newcombe) for the Chunichi Dragons in 1962. 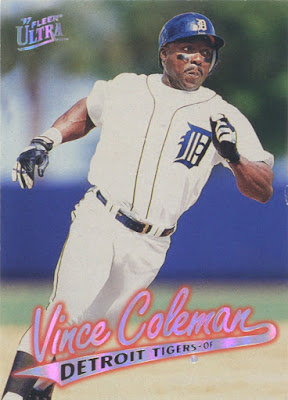 The shortest-tenured member of this roster, Vince Coleman hit a pitcher-esque .071 in six games with the '97 Tigers before being released and calling it a career.

Like Billy Ripken before him, I owe a great debt to Ultra for producing the only card I own of Coleman as a Tiger. 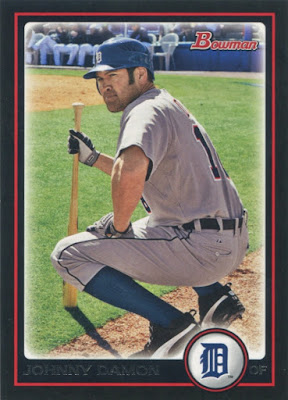 Johnny Damon played for four different teams during the final four years of his career, including a blink-and-you'll-miss-it stint with the Tigers in 2010.

Though it was a solid year by all counts (he hit .271 with a robust .355 OBP) I don't much remember Damon as a Tiger, though I am a fan of this card -- which has me nostalgic about days when Bowman actually included half-interesting photos in their product. 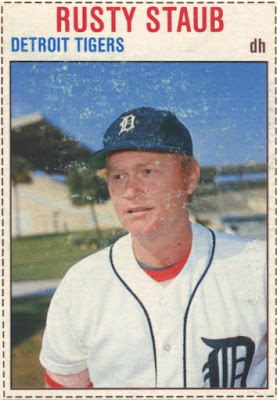 I don't have a great nominee for the DH position on this roster in my binders at the moment, so I'll have to give the nod to Rusty here despite the fact that he spent over 500 games with the franchise.

Even so, the sight of Staub as a Tiger has always struck me as still somewhat unfamiliar, and besides, I don't often get the chance to show Hostess cards in these posts.

That just about does it for this edition of "Short Term Stops."

Thanks for tuning in.
Posted by Nick at 6:37 PM

Had no idea most of these guys played in Detroit... but I somehow knew about VC.

Have one more for your Short-stop Tigers Jacque Jones (Ugh..) He was a bad signing by the tigers.

I enjoyed the history here Nick. I keep my hopes low to avoid disappointment. It seems to have worked out this year. It's a shame some of the greats like Mathews, end their careers on new teams.

According to the site I use there are 12 cards with Eddie Mathews as a tiger. Here is a link to the ones they have a picture of.