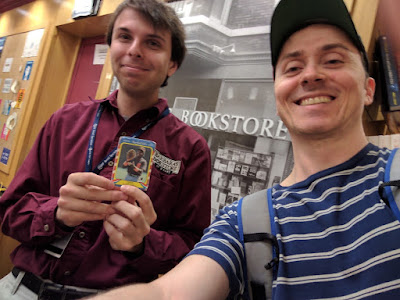 Why is some random customer snapping a picture of me at work, you ask?

Because that's not a random customer at all: it's Gavin of the legendary "Baseball Card Breakdown" blog! Last month, Gavin had let me know that he was flying through O'Hare and, luckily enough, I happened to be at work in the bookstore during the time of his layover. We chatted about cards and other things, and he snapped this picture of he and I (with me holding his Tony Gwynn wallet card) for posterity.

While I ideally would've liked to have met Gavin in a more card-structured environment -- one where I wasn't wearing a maroon uniform and asking customers if they needed a bag every thirty seconds -- it was still an absolute pleasure meeting Gavin, a great guy behind what has long been one of my favorite blogs. 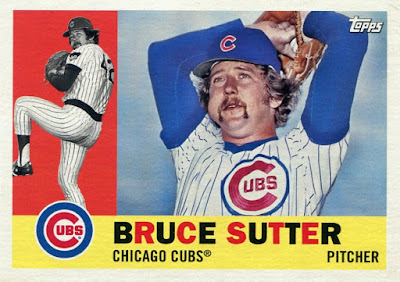 Better yet, Gavin gifted me a snap-case of cards during our meeting, which resulted in a glorious first for me: the first time I've sorted baseball cards on company time.

First up was this Bruce Sutter from this year's Archives, a terrific card of a guy who doesn't pop up in many modern checklists. 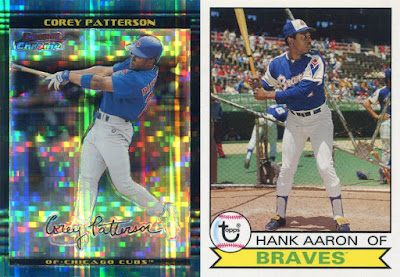 Gavin knocked out my last few remaining needs from 2016 Archives -- including that beautiful Aaron -- and also included a few surprise Cubs, including a Corey Patterson (remember him?) x-fractor that very nearly caused my scanner to combust. 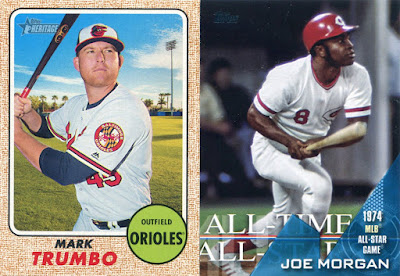 A couple more recent needs, with the Trumbo being a much-appreciated SP. 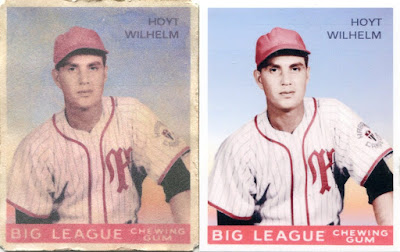 But here were the unquestioned centerpieces of Gavin's in-person gift: a couple Hoyt customs done up in the old-time Goudey design.

Both "loved" and Gem Mint examples of these were included in my snap-case, and the shot is a rare image of Hoyt's stint with the Cuban League's Havana team which Gavin also used for a magnet he sent me around Christmastime last year.

Safe to say that meeting Gavin and flipping through awesome customs and others made for the best half-hour I've ever spent at my often dull job. 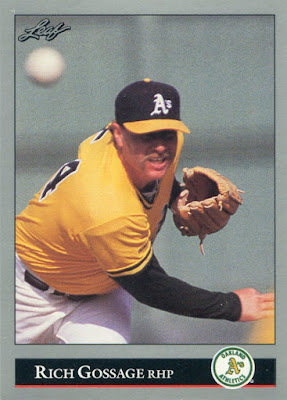 I guess it was fitting that Gavin and I would eventually meet, because our paths had crossed trade-wise quite often in the preceding months.

I received a PWE from him a while back that immediately won my heart by featuring this '92 Leaf Goose Gossage, one of the few cards of Goose as an Oakland A and a former Dime Box Dozen need of mine. 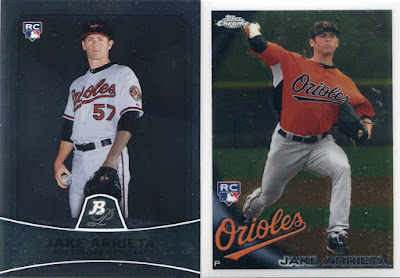 Also included were a couple Jake Arrieta rookies I believe I specifically requested from Gavin at some point, cards I'm happy to have even though I doubt Arrieta will throw another pitch for the Cubs after 2017. 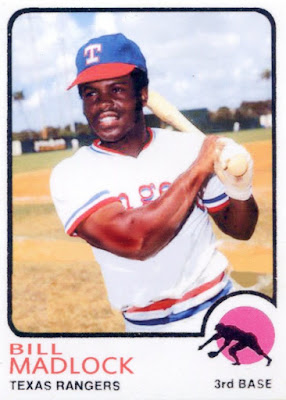 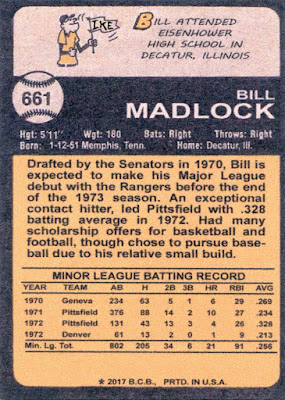 But as you already know, a package from Gavin isn't complete without customs.

This PWE was centered around a couple Cards That Never Were, the first being this faux-rookie of Bill Madlock on the '73 Topps design. No card, to my knowledge, has ever been produced during Madlock's brief 21-game cup of coffee with the '73 Rangers, which made seeing something like this a longtime dream of mine.

And as great as the front is, don't sleep on the flip side, either: that's a pretty darn virtuosic rehashing of the actual '73 Topps backs. 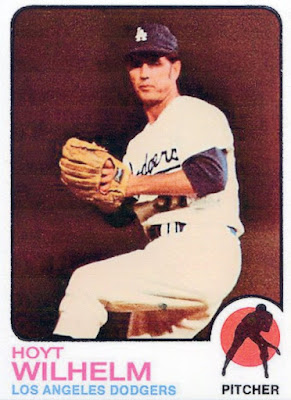 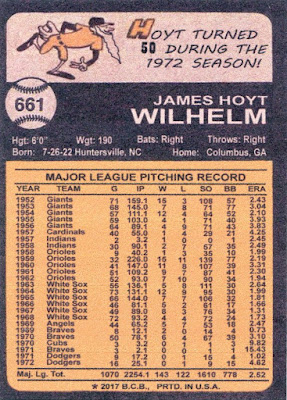 But the customs didn't stop there, because HOYT!

Though Hoyt did pitch in 16 games with the '72 Dodgers, Topps chose to leave him out of their set the following year, robbing us future Wilhelm devotees of seeing his career stats on the back of what should've been his true sunset card.

Still, over 40 years later, here came Gavin, ready and able to create the hallowed Sunset Card That Never Was -- lengthy career stats and all -- and thus bringing a long-awaited sense of peace and closure to my Hoyt collection. 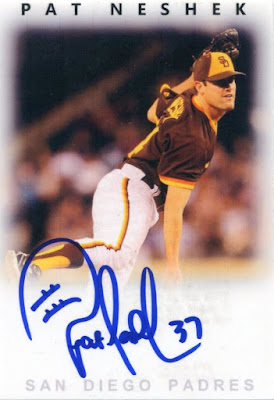 And even that wasn't all from Gavin, because I had the privilege of participating in the Big Fun Game he ran on his blog a couple months back.

The Big Fun Game theme has been sweeping the blogosphere as of late, and Gavin certainly didn't hold back with his. The number I originally selected would've resulted in an eye-opening prize all on its own: a couple of Gavin's customary customs alongside a beautiful Tony Oliva auto from Topps Retired Signature.

But as is the crux of Big Fun Games, I had my prize stolen, though it admittedly wasn't much of a surprise since Brian (a noted Twins fan) was selecting a few slots after me. 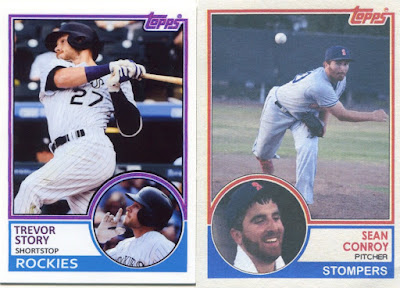 So, like a true five-year-old child, I responded by stealing someone else's prize: a lot of nothing but Gavin's many awesome customs I'd had my eye on ever since it'd been revealed in the Big Fun Game. 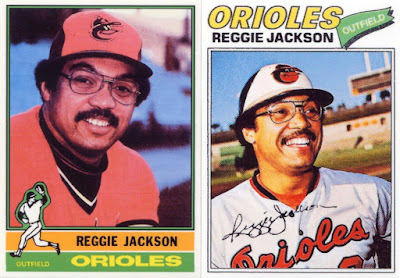 As great as Oliva & Co. would've been, this was the prize I really wanted, and I prayed and prayed with each passing pick that no one would steal it from me. 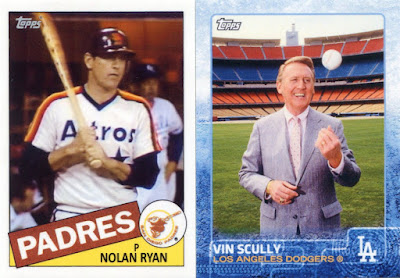 And my prayers were answered, because no one did!

Through the rubble and fire that was the Big Fun Game, I emerged with a generous stacks of Gavin's brilliant customs, all of which took their places right alongside standard cards of guys like Neshek and Reggie and even Scullys from companies like Topps and Fleer in my team binders. Although I will say that the above Nolan Ryan threw me for a bit of a loop given the odd Astros-Padres crossover.

A little digging, however, revealed that it's a shot from the '85 All-Star Game in which the Ryan Express had seemingly forgotten he'd have to bat in the contest, borrowing the helmet of a rival Padre as a last resort. 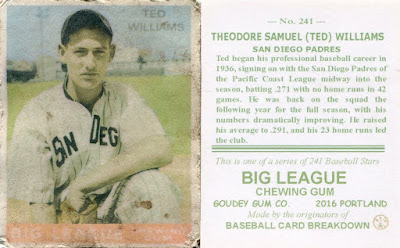 Much like the Hoyts I'd receive during my in-person meeting with Gavin, here's a couple Goudey-styled customs of Teddy Ballgame during his minor league days with the Padres, then of the PCL. 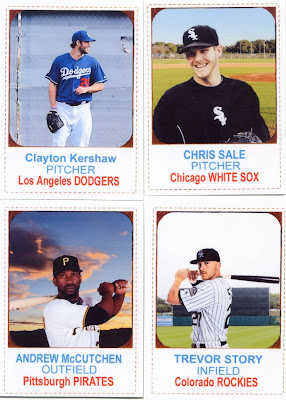 Just when you thought it couldn't possibly get any better...Hostess customs!

Gavin even included what might be my favorite part of finding old Hostess cards in these rehashings: the dotted lines, which often reveal how inept or masterful some unknown '70s kid was with a pair of scissors. 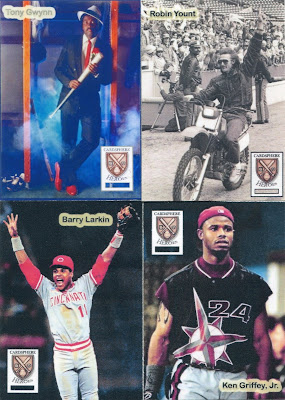 Last up was (what I believe is) a complete run of Gavin's specially-made Cardsphere Heroes set, which documents the predominant player collections of many of the most prominent names around the blogs. 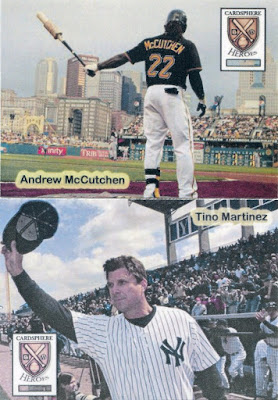 The idea is great, and the execution is even better: customs or not, these are some of the best cards I've seen of any of these guys.

I'm sure the Cardsphere Heroes themselves -- like Tony and the Junior Junkie himself -- would tell you the same thing. 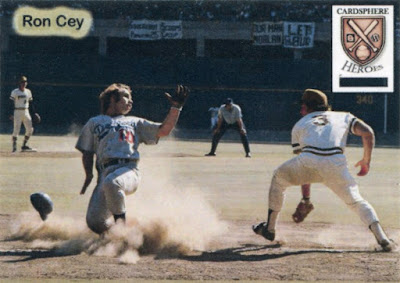 And finally, here's a truly magnificent action shot of the Penguin, one I'll bet made Mr. Owl quite happy.

As I flipped through my Big Fun Game winnings with a mix of awe and wonder, one question kept crossing my mind: why does Gavin not have a job at Topps yet? With the quality of original design and card ideas the guy has (as well as just plain thoughtful trade packages), I'm sure many of my blogosphere comrades have wondered the same thing over the past few years.

If anyone out there at Topps is reading right now, know this: I, like everyone else around the blogs, can vouch for Gavin.
Posted by Nick at 6:05 PM

Aw, thanks, Nick! Glad you dig the cards, and it was great meeting you, too.

Wow that's quite the batch of custom. It's always cool to meet some of the guys you trade with

Those custom cards are FANTASTIC!..so many cool ones...

Gavin's customs are second to none. Great stuff.

Awesome stuff. Thanks for sharing.

Topps should have Gavin on retainer at a minimum. Great cards and a great post!

I'm super jealous of both of you! Meeting a fellow blogger and doing an in-person trade sounds hella fun.