A day in the bleachers 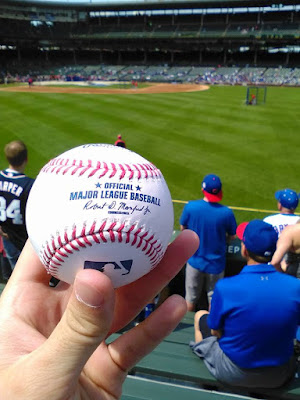 In a great moment of happenstance, my dad acquired a pair of bleacher tickets to a Cubs game I'd had marked on my calendar for a while: a Cubs-Nationals matchup at Wrigley this past Saturday.

For starters, it was a landmark day on a personal level since it marked the first time I'd ever sat in the bleachers at a baseball game. I've been frequenting ballparks for almost twenty years now, and I've sat everywhere from a few rows behind the dugout to along the foul lines, from the upper deck to the nosebleeds. But never the bleachers.

Dad and I got there when the gates opened (another first, as we usually arrive closer to game time) and the Nationals were taking BP when we found our seats in the bleachers about five or six rows back from the basket. And I swear to you, the moment we sat down, I remember thinking: maybe I'll catch a ball out here.

Wouldn't you know it, I saw a fly ball headed on a line to me minutes later, the trajectory of it hovering a bit above where I stood (I couldn't tell who hit it since the Nats were all wearing lookalike BP jerseys). I turned on instinct, hoping it'd rebound off the people a few rows behind me and ricochet down my way. And that's exactly what happened.

It wasn't the most graceful of catches -- the ball bricked off my fingertips on the first attempt before I snatched it from the empty row behind me, and I kicked over my half-full beer in the process -- but just like that, I had the most unexpected first of them all: the first time I'd actually caught a ball at a baseball game. 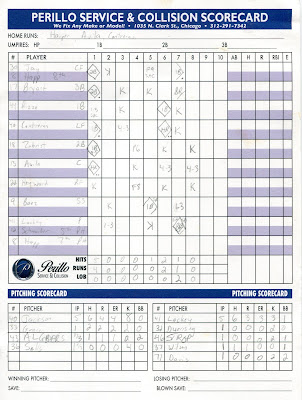 Better yet, the game itself -- which was almost an afterthought after all the pregame excitement -- was a good one, enshrined for all of eternity in my trusty scorecard.

Every fan seemed to get what he/she came to see. Nats fans (and there were quite a few, though the raucous Cubs bleachers drowned them out) saw Bryce Harper hit a first-inning solo shot. Cubs fans saw some early offense, powered by Alex Avila's two-run homer, also in the first. Pitching fans got to see some dominant mound work in the middle innings. Harper haters (like my dad) got to see him strike out to end the game, representing the tying run.

And Cubs fans got to see a 7-4 Cubs win, which haven't been as common as they were a year ago. 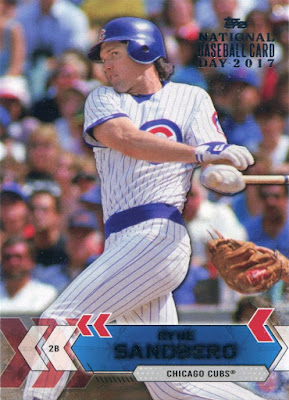 But -- as I mentioned at the beginning of this post -- there was a reason I'd had this game specifically marked on the calendar long ago.

As I was browsing the Wrigley Field giveaway listings early in the season, one in particular caught my eye, the one for August 5th: Commemorative Trading Card Pack Presented by Topps. 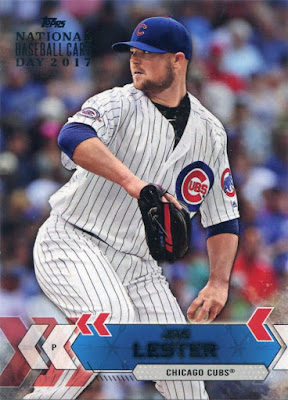 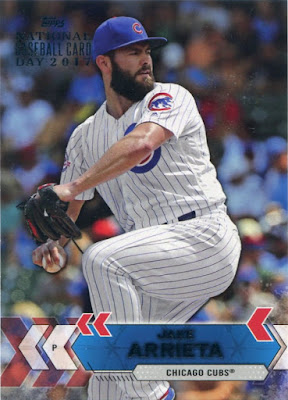 This isn't the first time the Cubs have used cards to lure me to Wrigley -- they issued a special set of hometown heroes over four separate dates back in 2013.

This time was a little different: I didn't know what the cards in question would be, and I couldn't find a single shred of info on the topic despite countless Internet searches on the days leading up to the game. 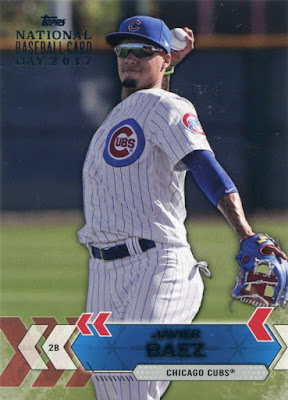 Turns out the cards are a preview of what I'm guessing we'll see on 2017 National Baseball Card Day this upcoming Saturday (which I'll most definitely be participating in), and they've been given out at ballparks across the country over the past couple weeks.

Dad and I each received a four-card pack of Cubs, and I managed to collect six of the subjects in the 10-card set (after pulling doubles of Arrieta and Baez). 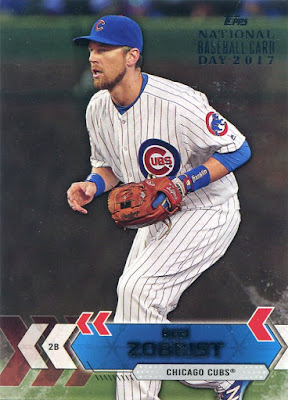 The cards themselves aren't anything noteworthy, but they'll always carry a little extra meaning to me since I had to go all the way to Wrigley to get 'em. 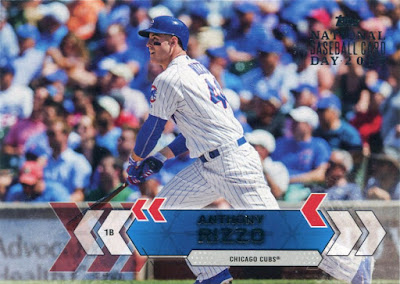 Between my dad lucking into bleacher tickets, getting to see a great game (and a Cubs win), actually catching a home run ball, and CARDS, I couldn't ask for much more out of an afternoon at Wrigley.

I use cards for a lot of reasons, one of the primary functions being that they simply keep me better connected to the game I love. Stats, birthdays, current photos, and all other pieces of baseball minutiae are at my fingertips in seconds, if needed.

That, in a way, is what bleacher seats did for me on Saturday. You don't see a ton of candid player activity sitting along the foul lines or in the upper deck. In the bleachers, I saw players trying to shag fly balls with goofy behind-the-back catches. I saw Stephen Strasburg give baseballs to a couple young Nats fans. I saw Max Scherzer banter with a pack of hecklers. I saw Jason Heyward salute the crowd as he took his position in right field. I saw a very human side of the game that can sometimes get lost in the brand-name universe of TV.

It was one of those special afternoons that reminded me why I love our National Pastime so darn much -- not that any of us need reminders in the first place.
Posted by Nick at 6:37 PM

You lucky duck! I can't imagine a better day at the ol ballpark. I usually sit in the bleachers when I go, as I like the freedom to move around. Of course, that's not necessarily possible these days with the crowds.

Really was a great day,buddy...

Congrats on your catch! That has to be pretty darn thrilling. These promos were discussed on the Trading Card Database about a month ago. It seems like multiple teams are doing them.

The very first game I went to -- Yankee Stadium, July 1978 -- a foul liner rocketed directly toward me in the mezzanine area behind third base. I would've caught it or been knocked over by it (I was 12) if the person in the row in front of me hadn't stuck up his glove and caught it. Never came close to catching a ball since.

The bleachers can get a little rough at times... I haven't sat out there in over a decade now.
I once caught a BP homer off of Ron Coomer's bat on my sister's birthday. Pretty neat that he ended up coming back to the Cubs as an announcer.
Sounds like a great day! Too bad about the beer... They certainly aren't cheap!

What? No autograph? lol.

Very nice day at the park. A ball and cards? Can't beat that.

What a day. A ball and a stadium giveaway cardboard? It doesn't get better than that. It took me over 40 years for me to get my first MLB ball. Mine is a BP ball too. Still waiting for a game used ball to come my way. I bring my glove to every game I attend... just in case.

I sat in the bleachers when we saw the Cubbies vs. the Dodgers amid Puig-mania back in 2013 when the National was out there again.

I still have extras of some of the 2013 giveaway cards...

Totally worth a spilled beer, even if it were full!

what a great souvenir! The Sandberg card is a sweet surprise too and one I absolutely MUST have.