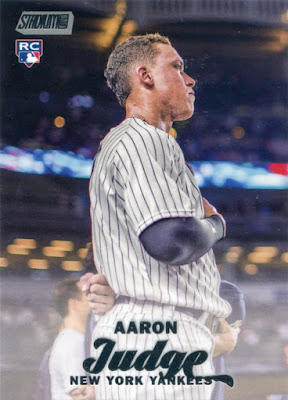 Due to a lot of general goings-on in my life and collection lately, I seemed to unwittingly become the only blogger who hadn't yet posted about 2017 Stadium Club.

So tonight, almost two months after its release date, here I am finally giving perhaps the most anticipated set of the year its due diligence on the blog. Better late than never, as the old saying goes, though I'm guessing the majority of you have already seen most of the cards I'll be featuring here.

I'll spare you a lengthy analysis of the design -- many others have already pointed out that, for the second year in a row, Stadium Club seems to be taking a page from an obscure Fleer release (this time, 2007 Ultra). 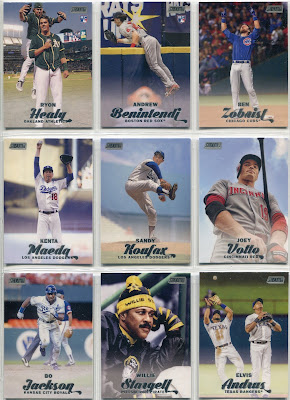 I went a bit crazy (Stadium Club generally has that effect on me) and bought much more of Stadium Club's skinny five-card retail packs than I should have, a fiscally irresponsible decision considering The National was just a couple weeks away at that point.

Though I did manage to (mercifully) pull rookies like Benintendi and Judge from the Target packs I opened -- cards I needed that likely would've set me back a good chunk of change on the secondary market -- most of my sampling of 2017 Stadium Club came from a large 20-cent box I found from a National vendor who had obviously opened a case or two of the stuff.

It didn't take long for me to see that, once again, Stadium Club retained its crown as the most exciting set of the year here in 2017. 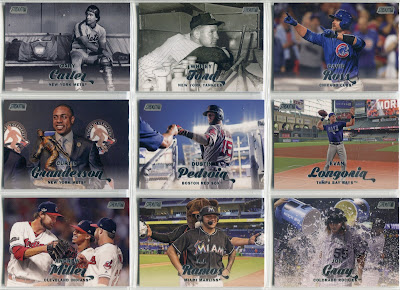 The photos are (forgive me if you've heard this before) fresh and unpredictable, featuring everything from David Ross's Game 7 homer to Evan Longoria throwing a football to AJ Ramos about to get pied by a teammate in some sort of bear costume.

The vast majority of these images have never been seen on cardboard before, and probably never will be again, and that's where the beauty and joy of Stadium Club lies. The allure of many sets, no matter how strong their original promise, may tend to wear thin after a few years. The big Beckett catalog is chock full of such examples.

However, 2017 marks the fourth incarnation of Stadium Club since the brand's rebirth, and I can unequivocally say that I am not even beginning to tire of it -- not by a longshot. 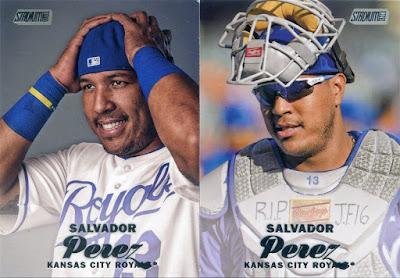 As has become tradition around here, I've undertaken the near-impossible task of selecting my ten favorite cards from this year's Stadium Club.

Nothing you've already seen in this post cracked the Top Ten -- incredible considering most of these also-rans would be at or near the top of the charts in any other set -- but I do have to give honorable mention to this Salvador Perez combo I unearthed from that 20-cent box at The National.

The card on the left was to be expected -- it is, after all, Salvy's standard base card from the set. The card on the right, however, is one of the super-rare photo SPs (honoring Perez's tribute to the late Jose Fernandez), something I didn't even notice I'd found until I was rehashing my National finds later that night.

Call it a happy accident. 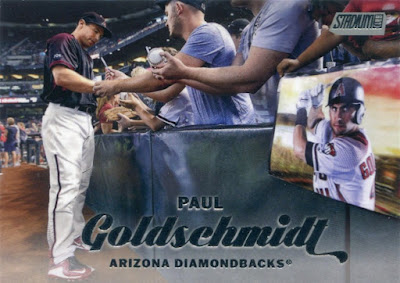 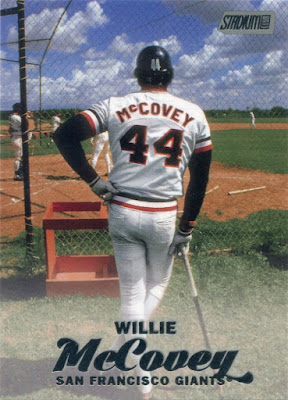 Willie McCovey doesn't even need to show his face to make for a bad-ass baseball card. 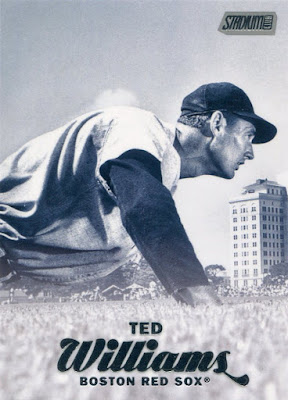 I was, admittedly, a little lukewarm about this photo choice when I first saw it: I'm not even sure what's going on here -- Williams looks to be either rising from a slide or doing push-ups.

Only later did I notice that, despite my initial apathy, this photo perfectly captures Teddy Ballgame's larger-than-life persona, the extreme close-up lending a very King Kong-like perspective to the image in relation to the seemingly tiny building in the background. 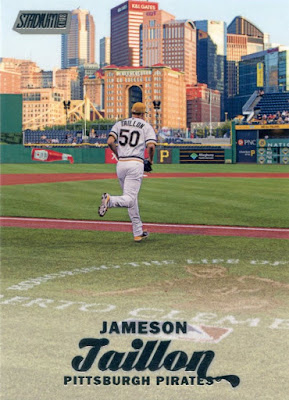 Another reason I'd like to see PNC Park at least once during my lifetime. 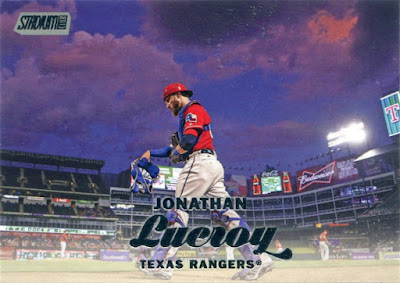 What I imagine War of the Worlds might've looked like on a baseball field. 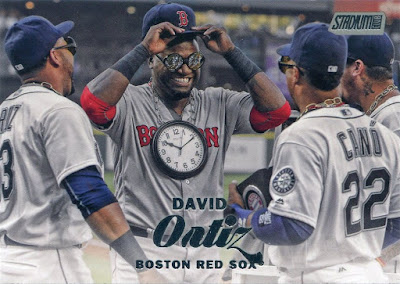 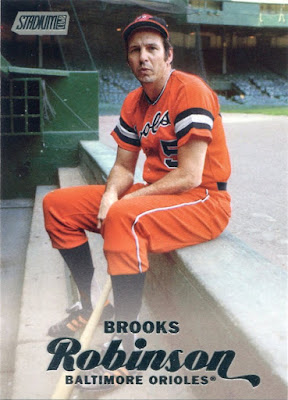 Something struck me as a bit off when I first saw this card, and it took me a moment to realize it was the jersey Robinson is wearing here.

Since when did the Orioles -- a team I've always thought of as more on the stoic side -- wear such blinding uniforms? Turns out the O's trotted out this all-orange wardrobe on only a handful of occasions over the 1971 and '72 seasons, making any images of players in these jerseys exceedingly rare.

I'm almost positive this is the first one I've seen on a baseball card and, for that, we all owe a huge debt to Stadium Club. 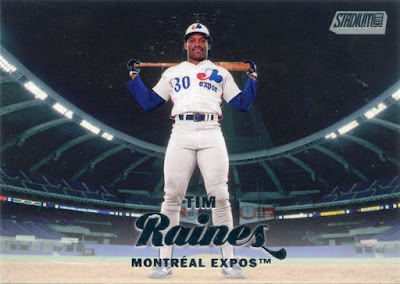 I'm hoping Tim Raines's recent induction into Cooperstown will grant him more spots in current products, though I doubt he'll ever be able to top this one. 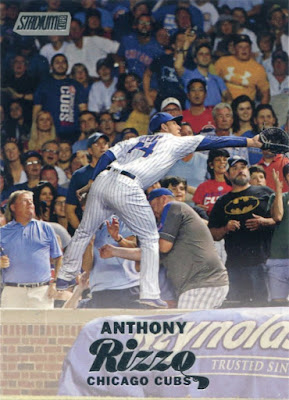 A perfectly framed still of Anthony Rizzo's second spectacular out-of-bounds grab (after his famous tarp catch the year prior), an iconic image that's sure to be burned in the memories of Cub fans for generations to come. 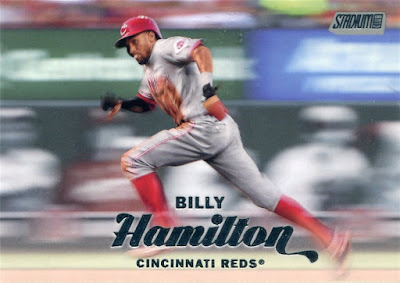 As I always do when I hear rumblings of Stadium Club being on the shelves, I quickly took to Ebay to sponge up any and all images of cards from the set I could.

One of the first I came across was this Billy Hamilton, and I immediately fell in love with it. It's one thing to capture an image of baseball's premier speedster on the basepaths, though it's quite another to do so with a perfectly blurred background behind him. Perfect idea, perfect subject, perfect execution. Perfect all around.

Though Stadium Club wound up producing many other worthy competitors after my initial Ebay searches, nothing topped my instant infatuation with Billy Hamilton.

I'd say 2017 has been a strong year for baseball cards thus far but, as it stands now, it (once again) looks like Stadium Club will resume its stranglehold on the Set of the Year crown.
Posted by Nick at 6:23 PM

Some fantastic photos there, I'm not sure what I'd pick as my top three - but I was browsing sports books in Barnes & Noble last week and saw Tim Raines' autobiography. Guess what picture he chose for the cover? The same photo Topps chose for his 2017 Stadium Club card.

Those are awesome. I do love Stadium Club but it makes me wonder if there really aren't enough great shots out there to supply a little more quality and variety to the Flagship set.

I loved these cards as well. Great photos just wow me at every turn with this set. The Pops and Votto cards really stood out of the ones you displayed here. Great post and always fun to hear from others who enjoy this set.

Yup, set of the year for sure in my book. Already gone off shelves around here though, and all I got was a lone blaster and one rack pack. Bummer! Great write-up as usual Nick.

Love your list. If I ever finish my set... maybe I'll borrow your idea. Not sure how I missed the Koufax... but I think that would find its way into my Top 5.

I loved the Taillon and the Stargell was his best release in a long time. If you ever do make the trip to Pittsburgh make sure you let me know.

Hope I get to finish a post-2014 Stadium Club set one day. These are so great! I especially like that Votto card.