How I spent my National Baseball Card Day 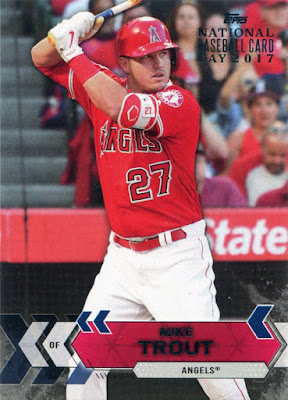 This past Saturday was, as you may have heard, National Baseball Card Day, and I participated as best I could.

Dad and I were able to carve out a good chunk of time during the afternoon and hit each of the only three card stores I know of around my general area. I wasn't planning on spending much money -- the only main goal I had was to get this year's exclusive Mike Trout card, only available to those who made a $10 minimum purchase at their local LCS.

Turns out I netted a pair of Trouts, as I (somewhat unintentionally) crossed the $10 threshold at two of the three stops I made on Saturday. 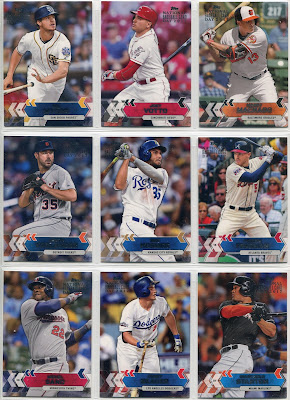 Of course, the packs of free, exclusive six-card National Baseball Card Day packs -- handed out to anyone who stepped foot in a card shop on Saturday -- were one of the main draws of the afternoon as well.

Better yet, each of the shop owners were nice enough to give both my dad and I a free National Baseball Card Day pack despite the fact that my dad didn't spend a single cent on Saturday. This meant that I received 36 cards on the house (38 if you count the two Trouts), giving me a fair shot at completing this year's 30-card NBCD set (featuring one player from each team and a step down from last year's 50-card checklist).

Turns out I didn't get the full set -- there were a fair amount of doubles in the packs I opened -- but I came pretty darn close, and I think we all know that few things in life are better than FREE CARDS. 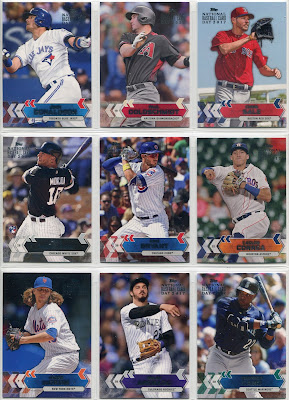 But National Baseball Card Day is about more than free cards to me -- Topps's decision to revive the hobby-centric holiday is one of the better and encouraging decisions the company has made in the last few years.

Firstly, it gets people out and into the doors of their local card shops. One of the store owners told me that he sees a noticeable increase in business on NBCD. Some of the people who walked in his store on Saturday were regulars, some were probably people he'd never see again (And that's okay, he told me, because that's what the day's all about), but almost none of them would've been there without National Baseball Card Day, myself included.

Secondly, unlike some other kid-centric promotions, NBCD really does seem to attract collectors of a younger age. I saw no less than four sets of fathers and sons/daughters walk into the three card shops I stopped at on Saturday (five if you count my dad and I).

Thirdly, it allows people to sift through some items at their LCS that they might've previously missed out on -- as I did, because my day wasn't all about the free cards. 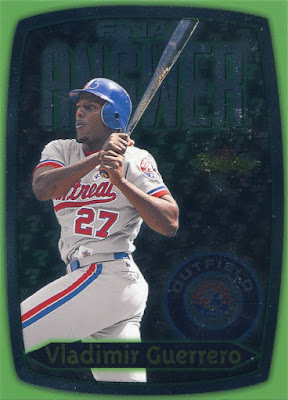 My first stop of the day was at Elite, which probably earns the claim of being my main LCS even though I only go there two or three times a year.

The owner's inventory doesn't change a whole lot, but it changes enough to get me to check in every now and then. The prices aren't anything spectacular, either: everything in the next few scans came from the shop's dollar boxes, not a lot of which I would've paid a buck for under normal circumstances. But this was National Baseball Card Day, after all, and I was happy to support the LCS with a few extra dollars if it netted some new adds to my collection.

My Elite haul included this Vlad from an insert set called "Final Answer" (tough to decipher from the unscan-friendly design) which of course comes from the early 2000's since it features a Who Wants to Be A Millionare? reference. 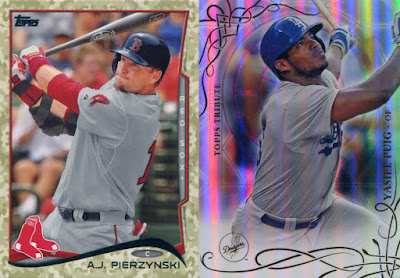 These actually weren't bad buys at a buck each: a scarce camo parallel depicting AJ Pierzynski's brief stay in Boston, and a high-end issue of Mr. Puig. 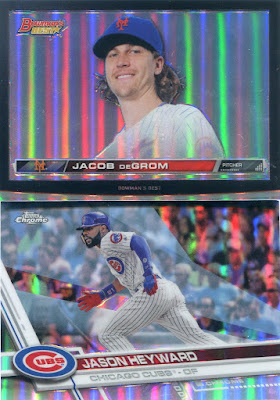 This pair of dollar-box finds includes a refractor from the brand spankin' new Topps Chrome release and an obnoxiously thick Jacob deGrom insert -- probably as thick as 6-7 standard cards stacked atop one another. 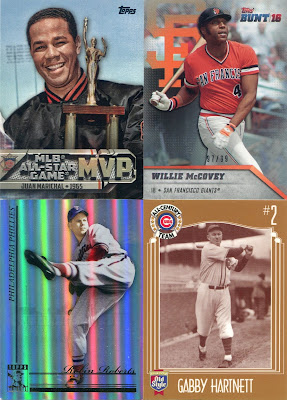 Some legends from the dollar boxes, including a Willie McCovey parallel numbered to just 99 copies and a rare glimpse of an All-Star Game MVP trophy from the '60s. 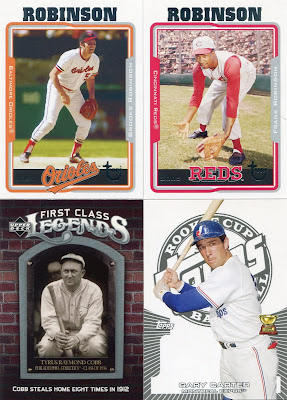 I start to salivate any time I see anything from Topps Retired Signature -- which doesn't happen often -- so I was happy to pay a buck a piece for those dueling Robinsons.

Also present was a rare card of Ty Cobb as a Philadelphia Athletic and a nice Gary Carter from another unheralded Topps set: Topps Rookie Cup. 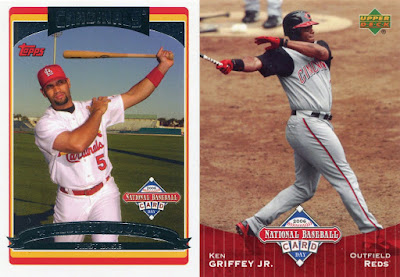 As I left, the shop owner graciously handed me a free pack he had left over from 2006 National Baseball Card Day, one of the last incarnations of the original NBCDs.

Topps and Upper Deck (remember them?) both got in on the fun that year, but I must not have participated at the time since most of the cards in that pack were new to me.

Such a gracious gesture put a happy end to my first stop on National Baseball Card Day.

This is the place that sent me into a semi-coherent rage a couple years ago, but if I could go back in time, I wouldn't have written that post.

That rant came during a period in which I seemed preoccupied with people overpricing their cards, which has always generally been par for the course at Tim's. Now, I don't mind it as much -- people can ask whatever they want for their cards, all I have to do is refuse to pay it. That's all. Plain and simple.

But even with the inflated prices, Tim's seems to do pretty good business -- he was even featured in a Super Bowl commercial a while back. I've been going to this shop on and off for about five or six years now, and Tim was genuinely excited to see my dad and I stop by on Saturday.

And hey, I actually found a decent deal in the rubble of high prices: though he was originally asking $20, Tim let me have this beautiful '62 Kaline for $15, now the oldest card in my collection of his.

Not the Steal of the Century or anything, but a purchase I'm still ecstatic about nonetheless. 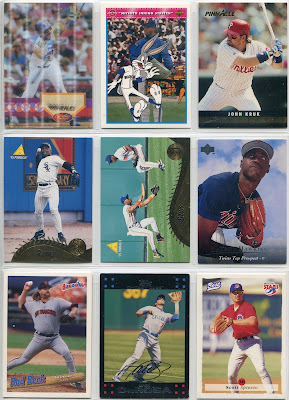 My last stop of the day was a bit of a wild card.

This shop is located in a barren mall -- chillingly so, like something out of an old horror movie -- and I honestly didn't even remember the place existed until I noticed it on the list of stores participating in this year's National Baseball Card Day.

The last time I went to this shop was nearly six years ago, and I only remember that because it was right around the time I started this very blog. Those early posts of mine (Bad Writing Alert if you choose to read them) featured a handful of 3/$1 grab bags I picked up, and wouldn't you know it, they were still there all this time later. I grabbed all 12 of the baseball-filled bags the shop had left.

While they were mostly late '80s/early '90s kindling, it still netted a few goodies -- notably some gems from '95 Pinnacle as well as a handful of cards from the 2007 Topps Cubs team set -- and that's not to mention the fun I had digging through those piles of random cards for a mere $4. 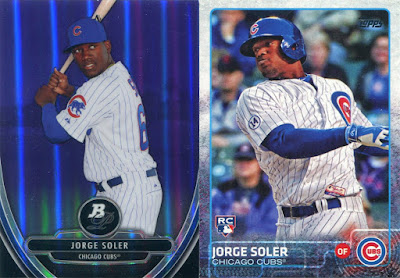 There was also a small dollar box off to the side which I don't remember seeing during my last trip to this shop.

Now that he's no longer a Cub, Jorge Soler has been sent out to pasture in discount bins all across Chicago. I'm sure this is the case in almost all big cities whenever a former hometown name gets traded.

I still collect Soler, however, and these are actually pretty good deals for a buck per, including that card on the right, which is a photo-variation short-print. 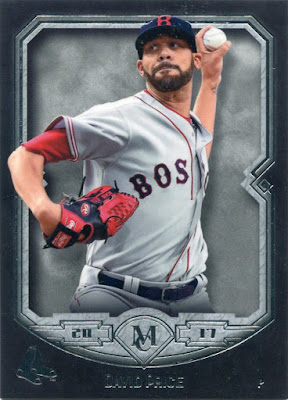 I'll end the National Baseball Card Day festivities with this Museum Collection David Price from the dollar box, which I picked up for the sole reason that Price is seen wearing a nifty Red Sox throwback here.

That was my National Baseball Card Day, in a nutshell. Free cards, nice deals, good people, and a whole lot of unfiltered fun.

Because that's what this hobby should be all about.
Posted by Nick at 6:52 PM

Had a great day with ya,boy...I didn't realize the NBCD set was one player from each team...good idea!

It looks like you had a very productive day of card shop hopping! Congrats on getting the '62 Kaline. If you get the chance, could you me what set that Gabby Hartnett is from? I have never seen it, and I really dig it.

Nice 62T Kaline! That Rookie Cup Carter is cool too. I think I'm the only blogger who didn't go out and track down any of these National Baseball Card Day cards. Oh well... I'm sure I'll find them in a dime box one of these days.

3 shops in one day, sounds like tons of fun. I made it out to my one and only LCS. I doubt you will but if you ever decide to part with that McCovey let me know, I haven't been able to find and of his Bunt parallels. Shoot me your want list for the NBCD set, I picked up 3 packs (took two of my kids with me).