The joys of a hotel card show 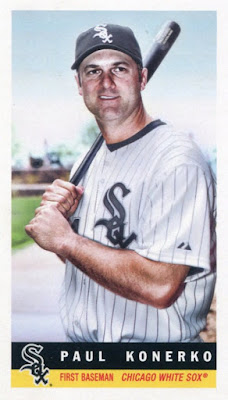 The National is being held in Chicago -- my home city -- at the end of this month, and as far as card shows go, that's all anyone seems to be talking about.

As great as it is, the National can be (and often is) overwhelming. And since I've had the feeling of being stuck in a work-sleep-work-sleep rut lately, I don't know that overwhelming is what I need right now. So that's why little old me decided to hit a much, much more palatable card show yesterday, one held at a suburban Holiday Inn about twenty minutes from where I live.

This show takes place once a month and houses around fifteen tables (at most) inside a small side room in the hotel lobby. Hotel shows, I've heard, were once the rage in the hobby, and though I caught the tail end of the hotel show boom as a kid, they've largely given way to massive convention halls with VIP passes and autograph guests as far as the eye can see.

This saddens me for a few reasons. 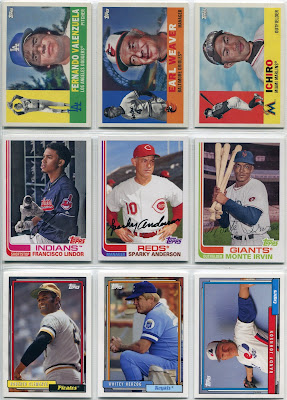 1) I don't have the kind of bank account that allows me to regularly attend huge convention hall shows, and I sometimes fall privy to overspending at them. Meanwhile, I came in well under budget at yesterday's hotel show.

2) I've said this many times on this blog, but I'm a shy, introverted guy. Big card shows are a pleasure for the sheer excitement and wonder of them all, but the noises and elbows and smells tire me out rather quickly. Hotel shows are a whole lot more subdued. I left the Holiday Inn yesterday with a good amount of energy still left in the brain tank.

3) What few hotel shows remain these days are awesome.

Hopefully, I'll be able to prove that last point to you over the course of this post. For starters: my one steadfast goal for Sunday was to knock out the vast majority of my 2017 Archives needs.

Mission accomplished, as I'm down to needing just a handful of base cards from the set (mostly bigger-name rookies) after coming home with a stack from the dime and quarter boxes yesterday...as well as the Paulie Bazooka insert at the top of this post. 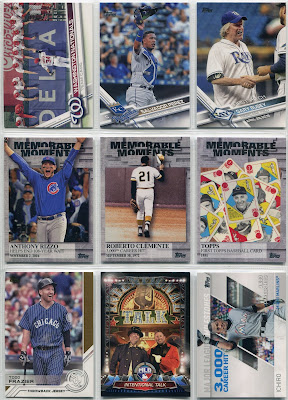 I also managed to cross off abiut 98 percent of my Series 2 base needs to go along with a huge stack of inserts from the set, all of them for nickels and dimes.

It was a banner day for my collection right off the bat, for I finally have Chet Steadman's rookie card! 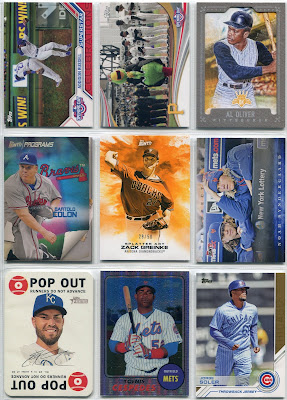 Smaller shows are also a good way to mop up some of my remaining needs from early-year releases.

The prices of these ranged anywhere from a nickel to a dollar (and that's my first look at Bunt's scarce "Splatter Art" insert set) but even all together, they came in at around the cost of a single pack of most products these days. 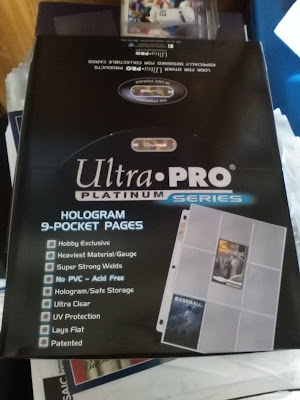 While I'm showing cards in nines, I might as well mention what was surprisingly the most extravagant of yesterday's purchases: a 100-card pack of Ultra-Pro pages.

If memory serves, this is the first time I've bought supplies at a show (it is called a card show, isn't it?), but I was running dangerously low on these things and the price ($15) was about the same I can find them for online. 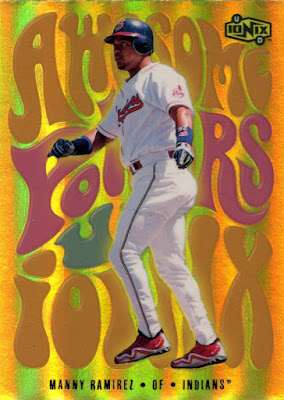 With 2017s and nine-pocket pages out of the way, it was time to get down to my favorite part of the card show experience: the randoms.

The discount bins began their Awesome Powers with...wait, what? You're telling me an Austin Powers-baseball card crossover actually exists? Indeed: this insert set hails from the largely forgotten UD Ionix brand, and though I would've ideally liked to have found one of someone besides Manny Ramirez, I decided it warranted its whopping dollar price tag. 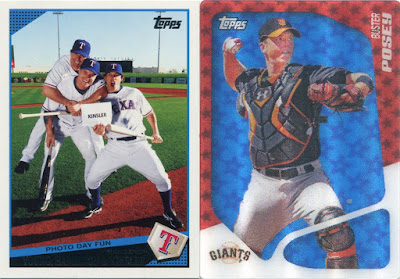 A couple gems from the dime boxes, including a 3-D insert from Buster Posey's rookie year and a hilarious Photo Day shot I'd somehow never encountered over the last eight years. 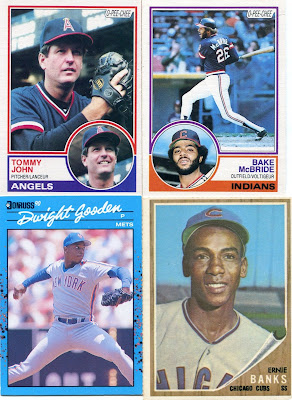 This show mostly skews towards post-2000 cards, but you can still find pre-millennium goodies with a little digging -- including OPCs, blue-bordered Donruss, and slightly oversized '60s reprints. 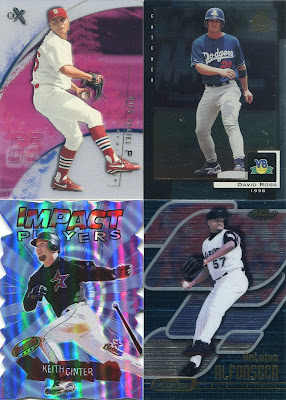 There are many localized events that take place within the walls of a card show, no matter the size: best bargain, best surprise, best card, etc.

But I have to say the most sheer fun I had yesterday was digging through a small box of late '90s/early 2000s singles one vendor had on display. While it certainly had its faults, this was the era I grew up with -- for better or worse.

I'll always feel a slight twinge of nostalgia when I see cards shaped like shards of glass or Top Prospect cards of the guy now known as "Grandpa Rossy" or cards of Antonio Alfonseca. 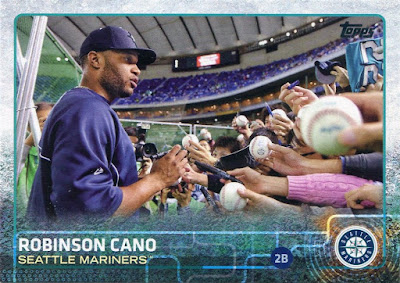 A small part of me always holds out hope that I'll find cheap Topps photo variations at card shows I attend, and my prayers were answered at the Holiday Inn, of all places.

This Robbie Cano short-print -- which appears to highlight a moment from one of MLB's recent tours of Japan -- became mine for a mere three dollars, and pages aside, it actually wound up being the most I'd spend on a single card all day. 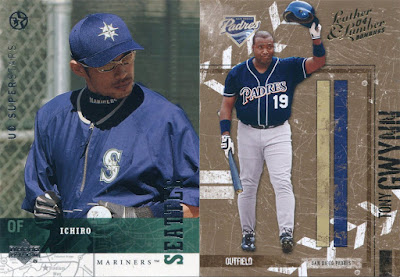 Mini-collection hits are always a welcome sight, and that goes doubly so when they depict top-tier binder guys. 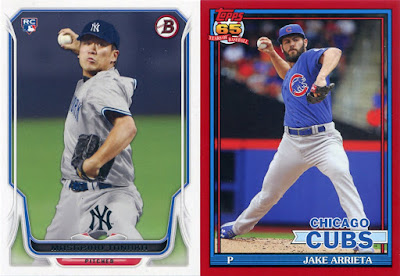 For scale, I walked away with right around 100 cards from his table for a grand total of four dollars. And there was a ton of good stuff in there, including (but not limited to) a Masahiro Tanaka rookie that, a couple years ago, would've ran me about 100 times the four cents I spent on it yesterday.

As if that wasn't enough, the same vendor also had a box that was either $1 per card, 15/$10, or 25/$15. At first, I picked out around six or seven cards I wanted and was content to leave it at that. But then I figured I might as well pick out a few more to get the 15/$10 deal...and once I had fifteen, I said why not go for the full twenty-five? It's only five dollars more!

As is card show psychology, but you can't argue with the results: among the best gets from that box was an Arrieta red parallel from 2016 Archives (numbered to 50 copies), a find all the more surprising when you consider the inflated prices Cubs are going for these days. 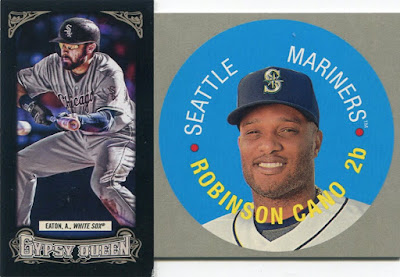 Minis from the 25/$15 box, including another appearance from Robbie Cano. 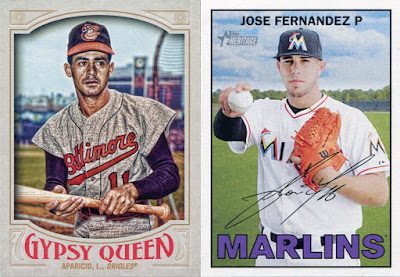 Most card show vendors know their stuff, which is why you'll often find SPs separated from the herd and priced higher than their standard base counterparts -- in the case of Jose Fernandez (RIP), placed in a penny sleeve and toploader and listed for a dollar.

But every once in a while, a short-print slips through the cracks, as with the Aparicio which fell out of a dime box near the end of the day, an especially exciting find since there aren't many cards of Looie as an Oriole. 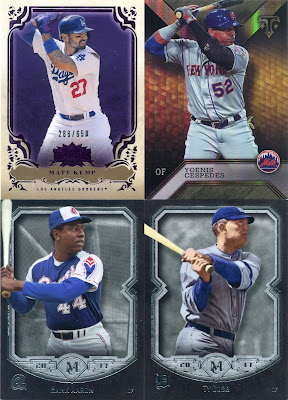 High-end cards from the quarter box, including a couple legends from 2017 Museum Collection, a set which I was surprised to see make an appearance yesterday since it was just released a couple weeks ago.

I only know that because I'm on Twitter where everyone and their brothers are showing their hits. 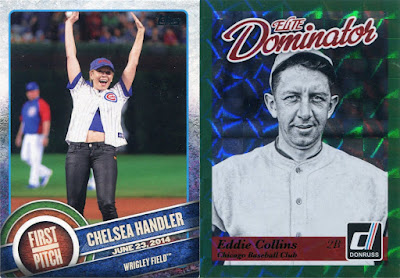 I can't say I know much about Chelsea except for the fact that she was the lone person keeping me from completing the 2015 Topps "First Pitch" checklist, a set I wasn't planning on building until I turned around one day and said Hey, I'm kinda close to having all of these.

And now I do have them all, even if I wasn't really trying in the first place. 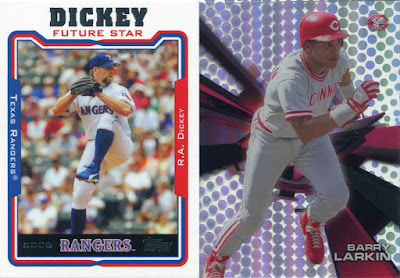 The trippy Barry Larkin was a dime, and I don't know much about that RA Dickey "Future Stars" insert other than the fact that it's mighty thick and at least semi-rare -- or at least I hope so because I paid two bucks for it (though I did haggle the vendor down from $5). 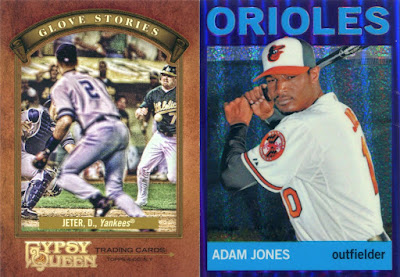 A couple from the dollar boxes, including an odd angle of The Flip which lends itself to one claustrophobic baseball card. 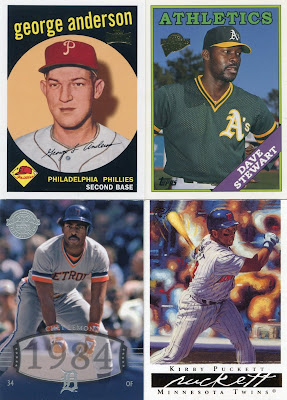 I've gone to enough of these Holiday Inn shows to become semi-acquainted with most of the vendors who set up there, and one guy always has a dime box of all-retired guys on display.

Since much of my collection centers around past legends, this is a godsend for me, and the box isn't skewed towards bigger-name guys: fan favorites among the likes of Chet Lemon are represented right alongside HOFers like Kirby Puckett. 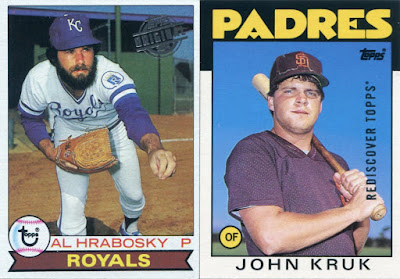 I found a healthy stack of buybacks from the aforementioned 25/$1 and 25/$15 boxes that I'll be distributing amongst a few of my buyback-collecting buddies, but these two are staying with me.

I just can't bring myself to part with Mad Hungarians or John Kruk rookie cards. 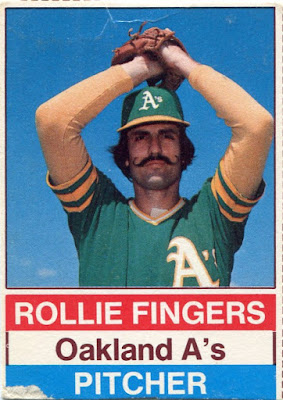 Vintage, unfortunately, doesn't make much of an appearance at this Holiday Inn show, but it's not a complete stranger.

Probably my favorite purchase of the day was this snazzy Hostess Rollie, which just about floored me when it fell out of a dime box near the end of the afternoon. And what's more, the patriotic red-white-and-blue design is fitting since this show took place just a couple days before the 4th. The day couldn't have ended any better.

Sadly, it's back to work for me tomorrow since the airport never sleeps (though my holiday pay basically funded yesterday's card show). But the rut has, for the time being, been broken. A few solid, calming hours digging through dime boxes at a Holiday Inn was exactly what I needed.

If you didn't believe me at first, I hope you do now: hotel card shows rule.
Posted by Nick at 6:32 PM

After seeing this post I have to reconsider the local hotel card so near me. They have a few more tables, but always been hesitant going for fear of selection. Nice post, and I might try to make my next show.

Nice cards. Love the IT insert!

I find that in the smaller shows that one may also come across collectors or former collectors setting up a table and trying to unload some of their collection or extras. It adds for some variety in who sets up at these shows. I find that there's a bummer if I go to card/collectible shows and it's the same vendors all the time.

I like that red-bordered Arrieta. 1991 Topps looking as good as ever!

A. I miss hotel card shows. There's one two hours away in Sacramento, but outside of that one... I haven't been to another in nearly two decades.

B. The 2017 Archives Bazooka inserts my be my favorite insert set of the year.

C. If that 86T Kruk Rediscover Topps buyback came out of the 25/$1... I will go ahead and call that the steal of the year. AWESOME CARD!

D. That Rollie is pretty sweet too.

i'd love to check out the Nat'l just once. I have a feeling that would be one time plenty! I'm drawn to smaller shows for the same reasons - fewer elbows and odors and need space! You picked up some gems Nick!