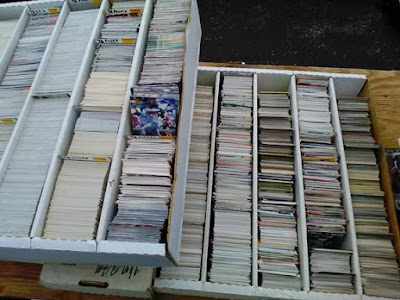 So where was I?

Oh, right. I left you with this cliffhanger from yesterday's post. So...to finish the story, one of the very last tables in the entire flea market was loaded with boxes and boxes of loose singles. But again, remember: I was fresh out of money at this point and didn't want to run to the ATM unless it was an absolute emergency.

When I arrived, the vendor was talking to a guy who had a large stack of cards in his purchase pile, and it seemed like the two were friends. Both of them greeted me warmly when I walked up to the table. I casually poked around the boxes and saw quite a few things I needed. Only problem was I didn't see a price on any of it.

Naturally, I asked: How much are these?

It was actually the customer who answered me first -- he said, and I quote: Can you believe it? ONLY A PENNY EACH (emphasis mine).

It took all the willpower in the world for me to calmly reply: I'll be right back. 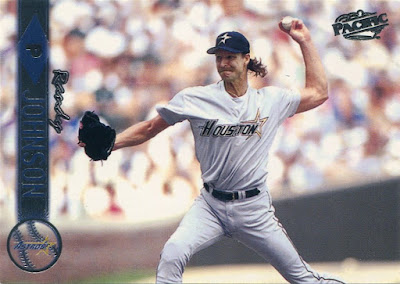 And I just about ran to the ATM and withdrew a $20 bill, my head spinning the entire way.

These boxes, on the other hand, were...well let me just put it this way: if I could custom-build a giant assortment of cards to sift through, it'd probably look a lot like the ones I found on Sunday. 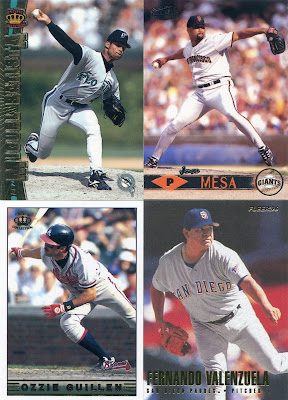 I'm talking stacks and stacks of late '90s singles that I almost never see anywhere else, including -- again -- Pacific!

As I mentioned yesterday with the Pacific Online box I'd found at an earlier table, Pacific was famous for their exceptionally large checklists, and you know what that means: get the obscure players and/or unfamiliar uniforms ready! In addition to the short-term sight of the Big Unit as an Astro seen above, this scan features another legendary hit with Ozzie Guillen as a Brave.

And, as a longtime fan of journeyman relievers, I was psyched to find my very first cards of Miguel Batista as a Marlin and Jose Mesa as a Giant: all for a penny each! 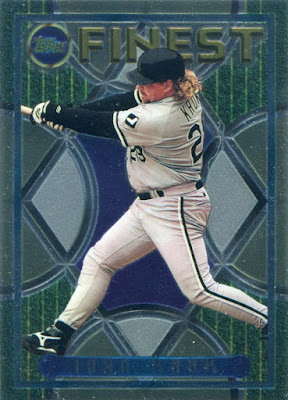 But perhaps none of the short-term penny-box sights were better than this one of John Kruk as a member of the Chicago White Sox.

This was a doubly exciting find because I'd actually purchased this same card (for 50 cents) as part of a Just Commons order a while ago, but it went missing from the package and never did arrive.

It took a bit of patience, but I ended up finding a copy for one-fiftieth of the original price. 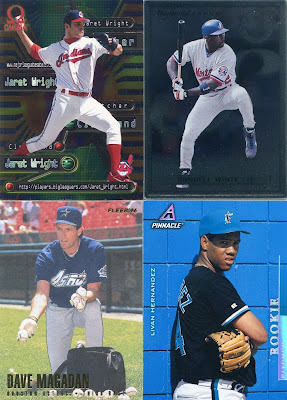 It's impossible to convey the sheer rapture I felt while digging through all those boxes...I mean, I would've paid a dime or quarter for most of these in a heartbeat, and here they were FOR A PENNY.

At such a bargain price (and I don't know that the word bargain is strong enough here), I threw anything and everything that caught my eye into my purchase pile: online cards, steel cards, cards with a lot of balls (sorry), cards with cornea-scratching amounts of teal. 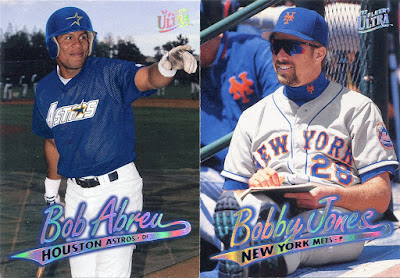 I'm not exactly sure why -- I didn't own a lot of these at the time -- but something about the ribboned font and fresh photography takes me right back to my youth. 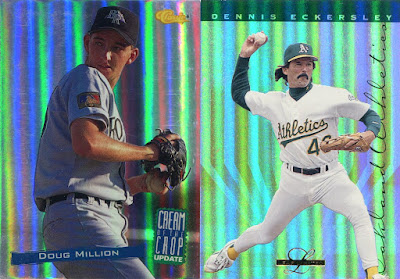 Shiny baseball cards were still a new fad in the mid '90s, and here's a couple earlier examples. 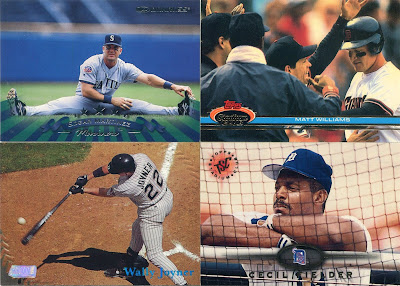 Almost as fulfilling as the cards themselves were the conversations I had with the vendor and other customer during the hour-plus it took to sift through all those penny boxes.

The two obviously knew their baseball, and the customer was picking out cards of obscure '90s Cubs -- think Manny Alexander, Tyler Houston, etc. -- and sharing stories of his trips to Wrigley and Sox Park, like the time he got hit with an Ozzie Guillen foul ball and the night he almost got into a fight with one of Cliff Floyd's relatives. 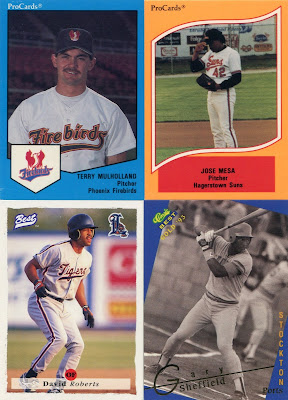 When you put all of it together, you get what is definitely in the running as my all-time best Discount Box Experience.

Penny cards and great conversation? And did I mention penny cards? I mean: penny cards. PENNY CARDS. And GOOD penny cards. Penny cards of minor leaguers like Terry Mulholland (who was perpetually 40 years old, from the looks of it) and Dave Roberts during his brief stay in the Tigers' organization. 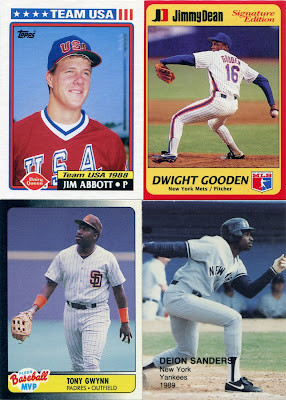 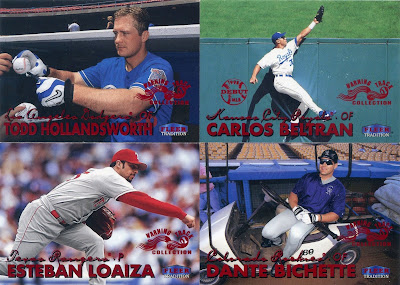 One of my favorite sets of the '90s is 1999 Fleer Tradition, and this guy had scores of these rare red-foiled Warning Track parallels in his penny boxes.

What's more, the Hollandsworth and Beltran are both mini-collection hits for me, which reminds me... 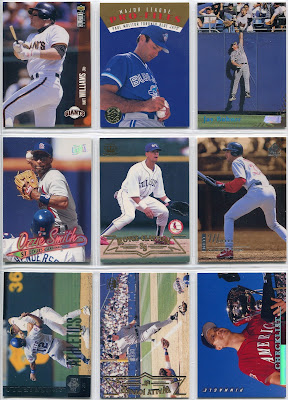 ...holy hell did my themes take a pounding at this table.

The mid-to-late '90s is the unquestioned king of mini-collection production: I'd say nearly half of my themed cards in total come from the era, if I had to guess.

And yet, all told, I still scored probably around 100 new ones from these penny boxes, only a tiny fraction of which are seen in this nine-pocket page here. 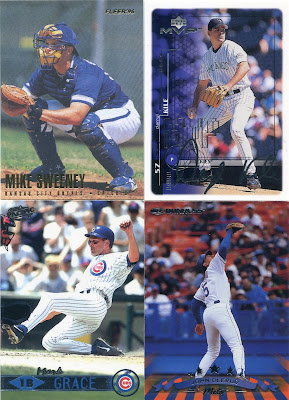 Many of my favorite guys played during the late '90s, which means that collecting them is both a blessing and a curse.

That's why these boxes were such a gift from the heavens: I could've easily gone the rest of my collecting life without finding cards like that Pacific Mark Grace or the Darryl Kile silver signature parallel, yet here they were for a penny. 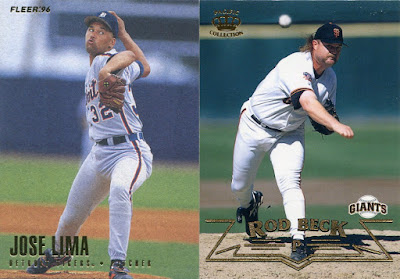 Even with the aforementioned frustrations of late '90s player collecting -- and apparently because I'm crazy -- I recently decided to add a couple more guys from the era into my binders with Lima Time and Shooter here.

Seriously, does it get any better than a Rod Beck card for a copper Lincoln? 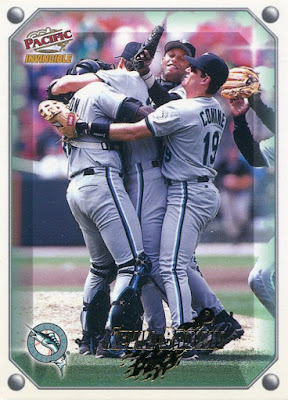 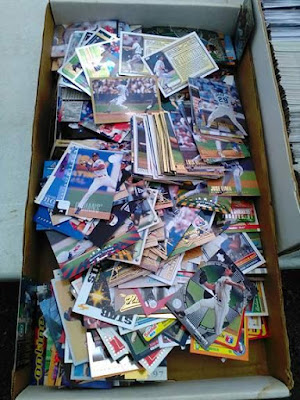 Seriously: here's what my purchase pile (if you can call it that) looked like after all was said and done.

That's a grand total of 540 cards right there, and they all became mine for five bucks. I'm no math major, but that's less than a penny per card! Anything and everything made it in there: cards for my binders, frankenset hits, and yes, quite a few goodies to send out to fellow bloggers.

Funny thing is, even an hour and over half-a-thousand cards later, I still didn't get through everything the guy had on display. That's how much he had. He told me he'd be back at the flea market a few more times throughout the rest of the summer and, needless to say, here's hoping I can catch him another Sunday in the near future.

When you're done reading this post, do me a favor and wake me up from this dream I'm apparently living.
Posted by Nick at 6:09 PM

Okay - I need to get my butt to this flea market. That's an insane haul!

WHAT?! I have NEVER come across a penny box yet.

I better be getting a text message of the next time this flea market happens.

By my count, you put this whole post together for less than the cost of a stamp.

Wow, oh wow! I would love to go through box after box of cards if they were a penny a piece. One of the vendors at my flea market sells cards for a dime and I have found many good ones. I look forward to seeing any other posts you write about your digging through these boxes.

i thought I scored with nickel boxes. Penny cards are supposed to be from 80s Donruss. Your vendor obviously doesn't know this. ;) Problem for me would have been pulling only one 20 from the ATM! You only spent $5?? WAKE UP NICK!!!!!!!!!!!!!!!

Good for you! Hope you meet up with him again.

OK where is that jawdrop emoji? INCONCEIVABLE!

I've been to a lot of flea markets... but I'm pretty sure I've never seen a penny box. Nice find Nick!

Nobody - is ever - gonna top that find. Wow!

The Holy Grail of discount baseball card boxes!!! I'm in awe! That Jim Abbott DQ...man, I'd probably faint if I saw that in a penny box. LOL

Did you actually hear the "AAAAAHHHHlelujah" chorus music or was it just in your head?

Wow.
First, penny boxes are like unicorns... fantastical, but certainly not real.
Second, if they did exist they would include cards like late 80s Donruss, like Julie said.
Third, you most certainly have been dreaming.

(Lastly, count me in with Tony and Jeff... road trip!)

Since everybody else has already said what crossed my mind while reading the post, I'll mention that I loved 1999 Pacific Crown Collection (and much of its Pacific brethren) because, as a Spanish language set, its checklist is stocked with Latino players, many of whom were underrepresented on cardboard. I'll have to do a post on that set someday...