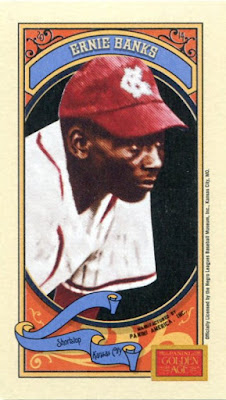 As any collector knows, the act of physically obtaining cards is just half the battle.

Trouble is, this is usually the only side of collecting we get to see on the Internet: the acquiring. The other half -- the sorting -- is often done behind the scenes, in private. It's much less glamorous than the HEY LOOK WHAT I GOT! excitement of acquisition.

But just for kicks, I thought I'd provide a sneak peek at what goes on in the aftermath of a trade package in Dime Boxedonia, and I have a stack I recently received from my buddy Jeff of "2x3 Heroes" fame at the ready for an example.

Jeff is one of the few fellow Golden Age fanatics I know of, and he kicked things off with this mini of Ernie Banks as a Kansas City Monarch, still the only card I've ever seen of Mr. Cub as a Negro Leaguer. 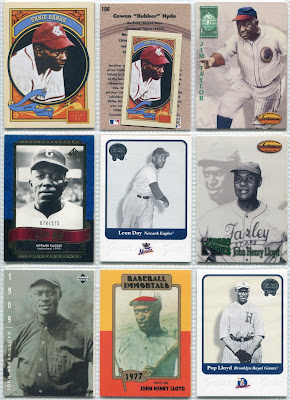 When it comes to sorting, minis simultaneously amaze me and annoy me.

I keep all my Negro League cards in the same binder, sorted somewhat haphazardly by player. Here, you can see the full-size Golden Age Banks with his new mini counterpart housed with a few other Negro League greats.

I've long had a love affair with minis despite the fact that they look clunky in a standard nine-pocket page. I don't own any of those mini pages I often see around the blogs, and besides, they wouldn't really work with my player-based sorting system.

For now, I'll have to live with the slightly off-putting sight of bite-sized minis in full-sized pages. 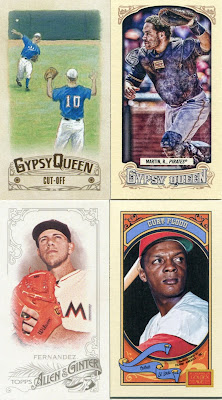 Some more minis of all makes and models from Jeff, including another Golden Age gem with the Curt Flood. 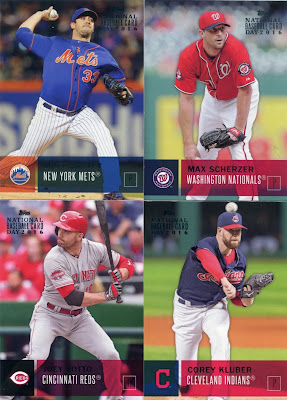 I've noticed that these have been quite easy to find on the secondary market following last year's NBCD -- so easy, in fact, that I'm pretty sure I'm nearing a complete set at this point. 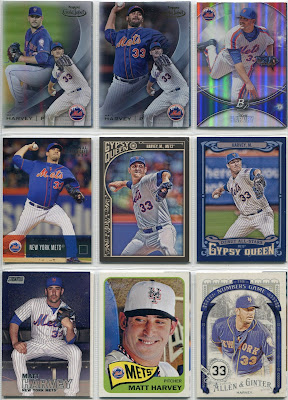 Standard cards are housed within my many team binders, and here's an inside look at one of the Matt Harvey pages inside my Mets binder (new NBCD single included).

Cards within each player section are basically strewn around randomly apart from the fact that I like to keep parallels/variations from same sets together (as seen with the dueling Gold Labels here). As of this writing, I own 77 different cards of Harvey, which takes up just over four full double-bagged pages in my Mets binder.

And yes, I double-bag my pages, because I don't have the money, space, or sanity not to. 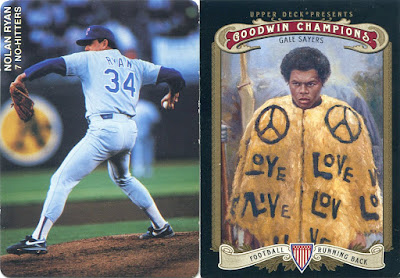 A couple oddballs from Jeff, including that far-out Gale Sayers which threw me for a bit of a sorting loop. 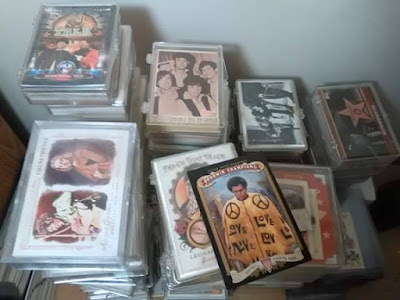 The Sayers -- like most of what I have from recent Goodwin Champions sets -- doesn't fit in with anything currently in my binders, so off it goes onto my nightstand in one of my many snap cases of off-brand and/or non-sport cards. 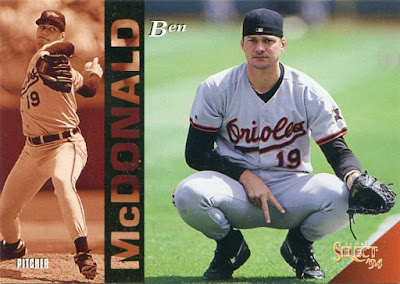 Ben McDonald isn't a binder guy for me, but this is a fun, quirky card, which makes it eligible for inclusion in either of my two Dime Box Frankensets. 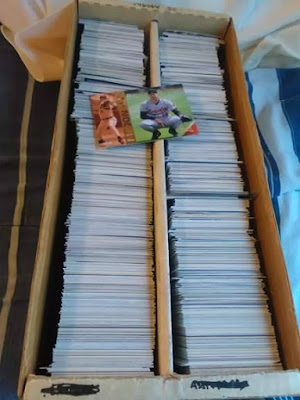 Sadly, after much deliberation, McDonald didn't crack either of the frankensets.

It's still a treasured card, however, which means it'll go into one of four boxes I have of frankenset cast-offs...because you never know when I'm going to want to start a third frankenset. 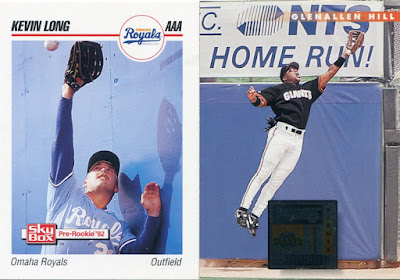 A couple "at the wall" mini-collection hits, including hitting-coach extraordinare Kevin Long and Glenallen Hill trying his best to leapfrog that atrocious Donruss logo. 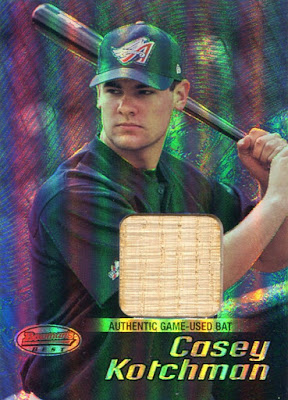 Jeff closed things out with the first new card I've received for my Casey Kotchman collection in a long, long time.

Kotchman was one of the first guys I decided to full-on player collect. Why? Good question: truth is, I'm not exactly sure apart from the fact that I was a big fan of the Angels when I returned to baseball cards around 2006-07, right around the time Kotchman was the starting first baseman for the club.

I'm long past the days of specifically hunting for relic cards, but I'll certainly take them whenever they come my way. 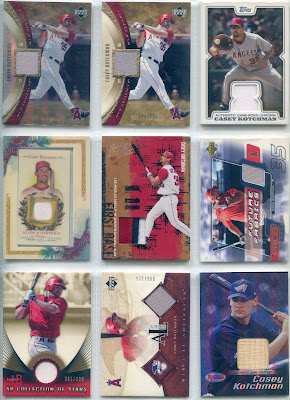 It wasn't until I consulted my relics binder (stored apart from my individual team binders) did I discover that Jeff sent what is my very first Casey Kotchman bat card.

There it is next to eight other swatches I'd accumulated during the days when I used to hoard jersey cards. For better or worse, I bet I'm the only person alive who can say they have a full page of Casey Kotchman relics.

Sorting may seem inane to a non-collector, but I think most in the hobby will tell you that they enjoy structuring and organizing their collection. I know I still get a huge kick out of sorting my baseball cards.

It brings a sense of sanity to this insane collection of mine.
Posted by Nick at 6:17 PM

These are my absolute favorite type of posts. Love reading about the sorting and storage methods of fellow collectors. And I doubly love the peeks at individual album pages and 'systems' of creating those pages, etc. As a Mets fan, I'm (of course) a big fan of that Matt Harvey page. Very sharp!

Thanks for sharing, Nick, and keep 'em coming!!

It's funny, because just earlier today GCA posted the realization that it's damn near impossible to find a baseball card with a photo of a catcher giving a pitch sign (and when you stop to think about it and look for one.. yeah, for some reason you never see that on a card). But then there you go with that Ben McDonald, which is about as close as you can get, even he was just goofing around.

Been debating on double bagging stuff in my binders to save space. Haven't pulled the trigger yet. Kind of nervous about walking down that path.

Great post, Nick. Sometimes I dread the sorting process, but there's other times where I rely on it to help bring me a little serenity after a rough day.
You have a whole draw of cards (like the Sayers) that don't fit into your collection? Let me know if you want more... some hockey, FB, basketball, and then a pile of just weird stuff. LOL

You gotta get those non-baseball cards off that nightstand, boy...hell,what's another binder or 3?..ha-ha!!

Another great dimebox post. I have idea for your mini's dilemma. Not sure it will work but you could try it. Take some of those thinner plain dummy blanks, the security "theft protection" cards from Target blasters and packs would do nicely I think. With an exacto knife cut out the center of the blank to the size (just slightly bigger) of the minis. Then place the mini in the frame like a jigsaw puzzle piece. You might have to secure it in a penny sleeve. Then slide the whole thing into the pocket. From my experience of putting penny sleeves into the 9 pocket pages is depending on the room of the pocket it either works very well and looks nice or it is a tight fit that causes the sleeve to wrinkle and wave about. IF that doesn't work the same sort of idea would to be to use the A&G frames they use for the mini autos and other "mini" cards that get special frames. Some collectors take all minis out of those things so you might need to request that those who do that save the frames and send them to you. Or maybe one of those custom card guys might have some of those frames around.

Nick, its good to see you working on your cards. I had cards I bought at a hockey card expo in Toronto in 1998 and just really sorted thru a year ago- 18 years later. Yeesh, thats what happens when you take a hobby break for bit. Great posts.

how much time do you devote to the hobby each week (or day?) You seem to keep up with your sorting, certainly better than I. Thanks for a glimpse into your collection!