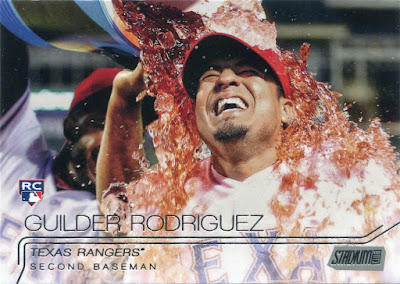 My biggest goal for this year's National was to get my hands on a large quantity of 2015 Stadium Club singles.

I found a dime box full of SC at a card show when last year's edition of the brand first hit the shelves. Would I be so lucky this time around? Not quite.

It was actually a 20-cent box this time, packed to the gills with 2015 Stadium Club. I knocked out about 90 percent of my overall base needs from the set, and nabbed almost all the ones I really wanted. (I also picked up a few others for a quarter each from a vendor later on in the show.)

I don't know about you, but I think 20 cents per is still an unbelievable deal when it comes to a set as beautiful as this one. I picked exactly 100 hand-picked singles for the price of a blaster, which left me wondering why I buy retail at all anymore.

Like last year, I love 2015 Stadium Club so much that I've decided to devote an entire card show post to this glorious brand. 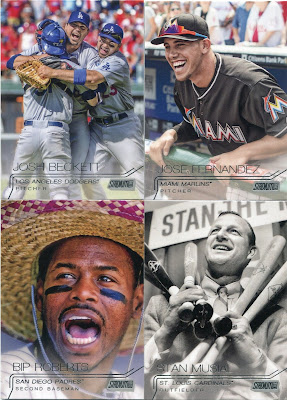 I never realized how gosh darn happy this set was until I started digging through the Stadium Clubs I'd picked up.

This, I think, is (at least subliminally) one of the reasons SC separates itself from the pack. Most of the other cards I see these days are either highly zoomed-in action shots (which leave collectors with the infamous "game faces"), or generic, closed-lipped poses.

Between these four and the Gatorade-soaked Guilder Rodriguez at the top of the post, there sure are a lot of smiles in Stadium Club. 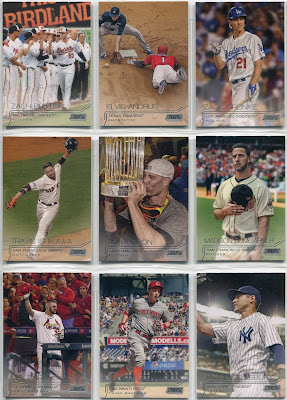 Since the cards were 20 cents each, and not a dime as I'd originally hoped, I told myself I'd be more selective with my purchases.

But, as I should've known, it's almost impossible to be selective with Stadium Club. It's just one fantastic shot after another after another, and I found myself throwing nearly every card into my purchase pile after a while.

And as terrific as the current stars might be... 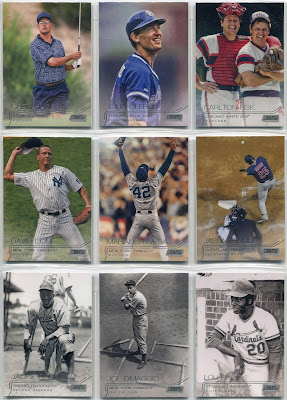 ...I think the cards of the retired guys might be the peak of 2015 Stadium Club. (I have to keep reminding myself that Mo and Giambi are no longer active.)

Maddux golfing, Seaver and Fisk hanging out, Cone tipping his cap after his perfecto (I assume)...Topps has themselves yet another winner with this year's edition.

I can only pray that this brand will be with us for years and years to come, and that card show vendors will continue to let them go for loose change. 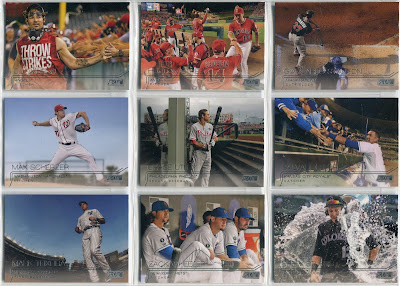 If horizontals are more your thing, don't worry, because this set has you covered.

When Stadium Club was released last year, I thought it'd be impossible for Topps to one-up themselves here in 2015. After all, I thought, how can you upgrade a perfect set? Well, I don't know how Topps did it, but they did it.

Against all odds, I'll go on record as saying that 2015 Stadium Club is indeed better than 2014 Stadium Club. 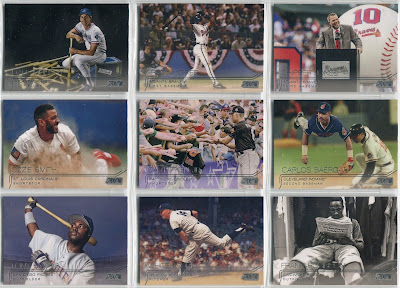 I've just shown a hearty stack of cards that, had they been released in any other set, would've undoubtedly received top billing.

However, with 2015 Stadium Club, none of them even managed to crack the Top Ten. Like I did last year, I tortured myself with the task of having to pick my ten favorite cards out of a stack of over a hundred.

It sure wasn't easy, but here's my Top Ten from the masterpiece that is 2015 Stadium Club. 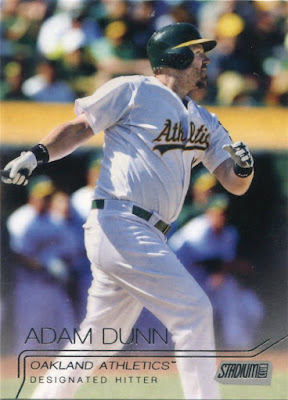 This photo pales in comparison to most of the others in 2015 Stadium Club, and yet here it is in the Top Ten.

Why? Because this is, to date, Adam Dunn's only true sunset card, and the only one that pictures him as an Oakland A. The White Sox dealt Dunner to the A's in a late-season waiver deal last year, but, for whatever reason, he didn't show up in 2014 Update, 2015 Flagship, or any of the other sets that have been released since then.

I'd long abandoned any and all hope that he'd get a true final tribute...but then here came Stadium Club.

I don't know why Topps waited until July to do it, but, in the end, they gave Adam Dunn the send-off he deserved. 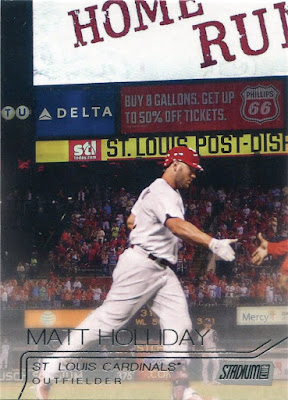 Most baseball card sets have promised to bring us closer to the action, but maybe pulling us away from the field has a more lasting effect.

Matt Holliday only takes up a small amount of space on this card. The rest of the real estate is occupied by the scoreboard, by the fans in the bleachers, by the overall scene behind the slugging Cardinals star.

I think we'd all agree that the zoomed-out shot is far superior in this case. 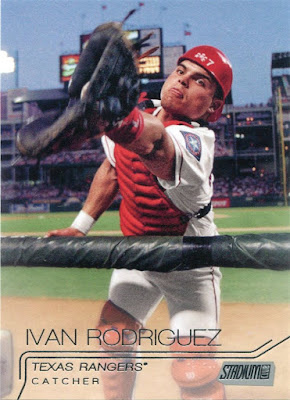 Straight off the baseball card and into your living room. 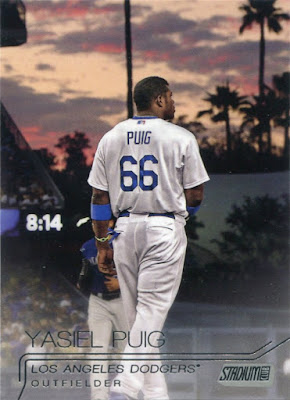 This, unlike the Adam Dunn card I just mentioned, is literally a sunset card.

I don't think I've ever seen Dodger Stadium's breathtaking scenery displayed better than it is here. The palm trees, the pink sky, the palm trees...just another 8:14 in La-La Land.

(I don't know why I get such a kick out of clocks on baseball cards.) 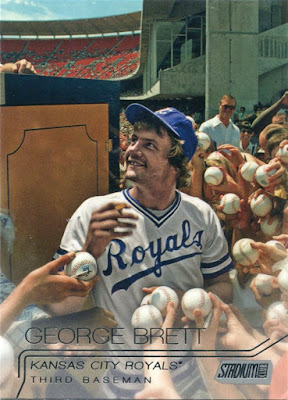 This photo just so happened to be the inspiration behind a song I dislike, but I'm all for it appearing on a baseball card.

I'm sure Brett-mania was a very real phenomenon... 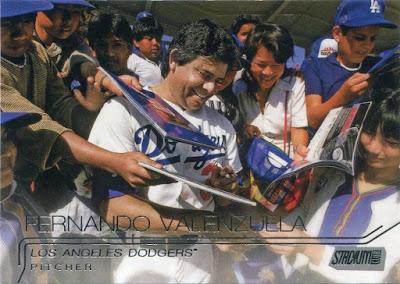 ...but Fernando-mania does it one better in this countdown.

A fitting Card #1 for what is a legendary checklist of baseball cards. 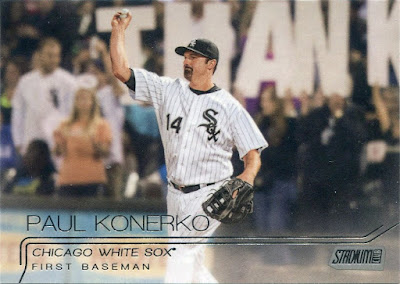 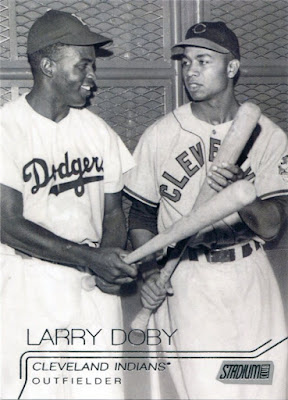 Doby was the second African-American to play in the majors, and the first to do so in the American League.

He and Robinson are and forever will be linked in the annals of baseball history, and I'm a little surprised that they'd never appeared on a card together (as far as I know) until now. 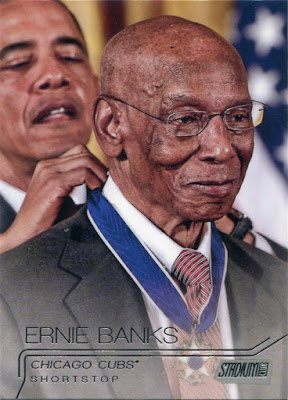 For the second straight year, President Obama makes a cameo in Stadium Club.

His presence certainly helped Big Papi earn the #1 slot in last year's SC countdown, and he very nearly topped the list again in 2015.

This was one of the first images I saw from 2015 Stadium Club when it first began to sweep the internet, and I knew then that the set would once again blow everything else out of the water. This photo of the late Ernie Banks perfect way of paying tribute to Mr. Cub.

Banks was a lot more than just a Hall of Fame ballplayer. He was, on top of everything, a first-class citizen, and you can see the pride in his face as the President himself (a noted Sox fan) honors him with the Presidential Medal of Freedom.

You have no idea how much I wanted to give this card the top spot on this list. 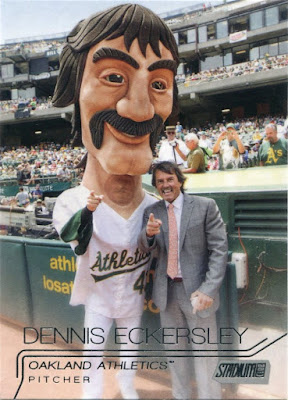 But Eck and his big-headed friend were #1 all the way, and I think you can see why.

The baseball card gods were toying me during my hunt for this card. As I mentioned, most of my purchases from this set came from a vendor who had them priced at 20 cents a pop. About half of one of the guy's 3200-count boxes was all 2015 Stadium Club.

This Eckersley was on my mind the entire time I was digging through all those cards. One stack passed with no Eck. Then another. Then another. Soon enough, I was on the final handful of Stadium Clubs in the box, and still no Eck. Uh-oh.

And, of course, the lone Eckersley in the box was tucked inside that very last stack. SUCCESS!

The baseball card gods are very real, and they can play cruel tricks on you sometimes.

But the baseball card gods are not to thank for the beauty of 2015 Stadium Club. That's all Topps, and I commend them once again for putting their time, effort, and resources into making the brand into another winner this year.

The Whitey, Stan the Man, Brock, McGriff... there all my favorites. This set is perfect and like you said I'm trying to stop buying retail but it's hard. Might have to make this set my first set build.

Eck's my favorite from the set as well, nice haul!

I love this set. I picked up a few packs right after the release then held off on any more until last week when I bought the entire set. I just received it in the mail today and had a blast going thru them. Congrats on picking up a third of the set, you got some of the best. To me this is the set of the year for the second year in a row.

You cleaned up. This set is my favorite and one of the few that I look at on a regular basis.

Oooh - I love that George Brett - I somehow hadn't seen that card yet. Stadium Club is the gift that just keeps on giving!

Glad the Doby made the cut. Love that card.

with so many excellent cards in this set, the Eck is my fave too. It gave me quite the loud chuckle. I'll see what I can do with your set needs.

Love that Eck card. Although deep down inside, I secretly wish that a photographer would have taken a picture of Rickey Henderson with his big headed mascot, instead of Eck. Whenever I go to games... I'm always pulling for #24.