Kid of the aughts 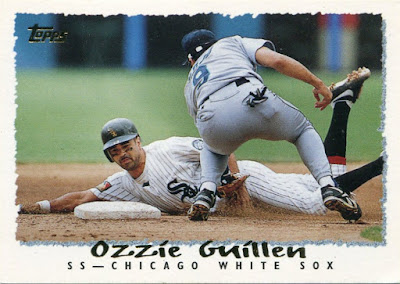 In my head, I like to think I'm a kid of the '90s, but, honestly, I'm really a kid of the aughts. I probably bought my first pack of baseball cards around 1999, but the majority of my developing years as a collector came in the early 2000s.

If we're talking pop culture, I'd much rather like to say that I'm a kid of the '90s. I'm not a fan of much of what has dominated the mainstream in the last fifteen years or so. (The '90s is far from my favorite decade for music, although it beats the tar out of almost everything from the aughts.)

I bring all this up because I recently received some cards from the predominant Kid of the '70s here in the blogosphere, none other than Greg of the hallowed "Night Owl Cards." His posts make me wish I grew up forty years ago. 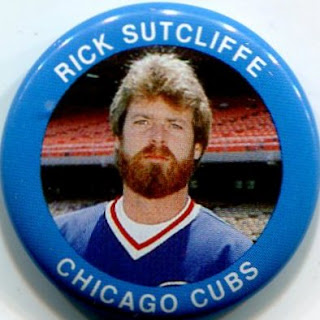 Kids of the '80s probably remember Rick Sutcliffe as a Cub better than anyone.

If this neat little pin oddball is any indication, the "Red Baron" was at his hirsute peak then. 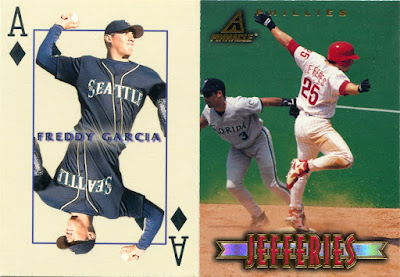 These are more tied to my era -- sets called New Pinnacle and Pacific inserts designed like playing cards. 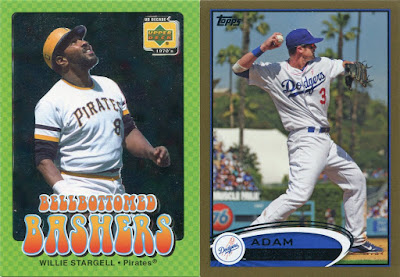 As a kid of the aughts (doesn't have much of a ring to it, does it?), I can at least take pride in the fact that the spectacular 2001 UD Decade release was right up my childhood alley.

Granted, it's a set that looks like something out of the '70s...and honors all '70s players...and features groovy inserts called "Bellbottomed Bashers"...but, hey, it's still the aughts, and I'm proud of that, I guess.

It'll be a while before we get kids of the teens into the hobby (that's the 2010s, not the 1910s), but maybe, looking back, they'll point to that Adam Kennedy as one of the defining cards of the decade.

I know it's been one of my favorites ever since I first pulled it from a pack of 2012 Update, and, thanks to Greg, I'm ecstatic to have the gold parallel in my binders. 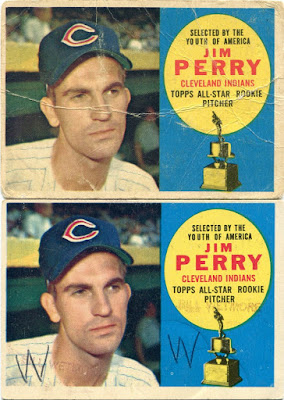 Greg sent the 1960 Topps Jim Perry you see on the bottom here, the one with the Ws and the "Bill Wetmore" stamp. I've had the same card in my binders for years, but my copy has about 762 creases. Which to keep?

Both, I'm guessing, have the marks of a couple kids from the '60s who decided to play with their Jim Perry cards. (Though, now that I think of it, a kid stamping a card with their name is kind of...peculiar.)

I went with the creased copy, but both of these things have character. (Note: I've changed my mind. Bill Wetmore wins!) 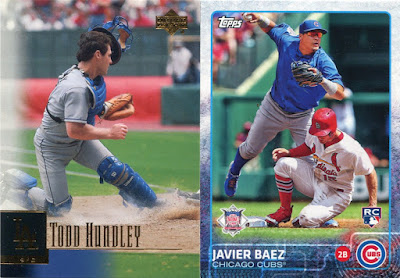 As a kid of the aughts, some of my childhood memories involves opening packs of 2001 Upper Deck.

Not the most glamorous of sets, I know (it's no '75 Topps), but that's all we had then. I even pulled an Ichiro rookie from one of those packs as a kid, though that terrific Todd Hundley play at the plate had escaped me until this package arrived.

I was also happy to see that Greg included the Baez "All-Star" double dip, a retail-exclusive card that caused a rightful amount of head-scratching on his part.

Baez hasn't even played in a major league game yet this year. 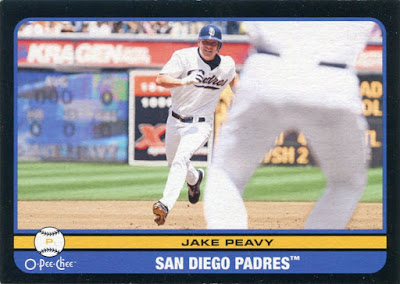 The set was a one-and-done effort in 2009, and I've always been a little saddened by that because it was probably the closest thing we've seen to Topps Total since...well, Total. Big checklist (relatively), simple design, cheap packs, solid cards. I bought OPC by the truckload that year.

The base version of this card of Jake Peavy bustin' it on the basepaths is a Dime Box Dozen need, and, although I'll be keeping it on the DBD list for now, I'm more than happy to have the black-bordered parallel around.

All things considered, I guess I can be a kid of every decade as long as I collect baseball cards. That's one of the beautiful things about this hobby. This package alone spanned across about six decades alone. And, hey, I guess I'm not too down on being a kid of the aughts. The decade had its high points.

Now, if only someone could tell me what they were...
Posted by Nick at 6:42 PM

Awesome cards, that Peavy running card is gold. And as for the Perrys, I say keep both ;).

I'm roughly the same age as you but like yourself I don't feel like a 90's kid. Probably because I'm not constantly saying I'm a 90's kid and spewing BS about how I was totally rocking out to Nirvana or Jimmy Eat World "back then".

I guess I'm more a Kid of the Extremely New and Extremely Old. With my focus going to the obscure minor leaguers of today and the cards from 100+ years ago/the dead-ball era.

I GOT IT! BASEBALL CARD BLOGS!

The Perry with the writing is way better,are you nuts!?..

I think a lot of 90s cards are underrated. There's some pretty good sets out there from that era, my personal favorites are 91 Donruss, 92 Upper Deck, 94 Topps, 94 Upper Deck, and 95 Upper Deck. 2000 Topps is another fun set as well.

Bill Wetmore stamps: The First Topps Buybacks. Collect all however many you can find!