I survived a JBF mega box, Pt. 1: The singles 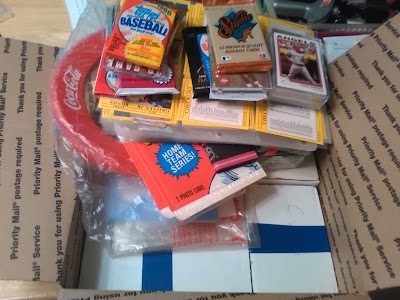 Somehow, I had to know this day was coming.

After witnessing the multiple battles between the immortal (and slightly insane, if you ask me) Wes of "Jaybarkerfan's Junk" and numerous members of the blogosphere, I guess I should've known that the war was going to strike my cozy little suburban home here in Illinois.

Perhaps against my better judgment, I entered a contest on the JBF blog a little while back that advertised a "large flat-rate box filled with random goods" for the winner, and, to my surprise (and horror), I actually won. The behemoth arrived a few days later.

I cannot stress enough how giant this thing was. JBF had bombed me a few times before, but never with anything close to this caliber. And it wasn't even all cards, mind you. Inside, I found a Coca-Cola frisbee, a grocery list pad with the word MILK written on the first line of every single page, and a bunch of other tchotchkes. 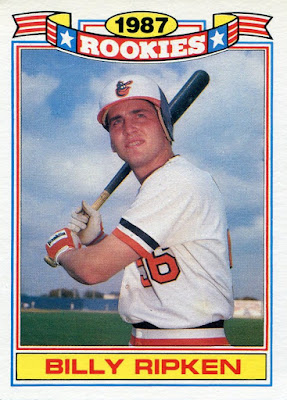 But, yes, as I said, there were cards...many, many cards.

There were so many cards, in fact, that I had to divide this post into two halves, something I almost never do with trade posts. This first one will focus on the loose singles that fell out of this mammoth.

As you might be able to tell from the photo at the top of the post, there were a handful of little white boxes within the mega box (five of them, if I recall), all packed to the gills with cardboard. A couple were all football and/or basketball, but the others were nothing but baseball.

And, although it took a lot of sorting and sifting (more than a days' worth), I did end up with a hearty stack of cards I needed.

This pre-F*** Face Billy Ripken rookie was just the beginning. 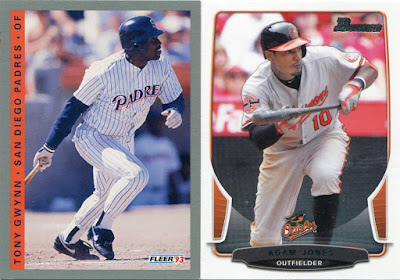 As I was going through the box, I had absolutely no idea what would spill out next.

There were cards from almost every era imaginable, everything from a '93 Fleer Tony Gwynn to a 2013 Bowman issue of Adam Jones, the subject of one of my newest player collections.

It was as comprehensive as trade packages come. 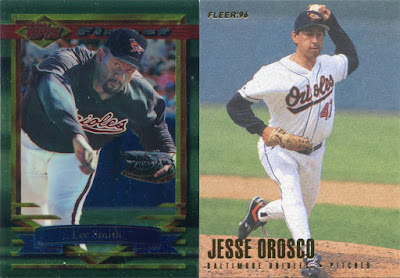 Cards from the mid '90s are among my favorites to receive via trade because of how little I find of them at card shows and the like. 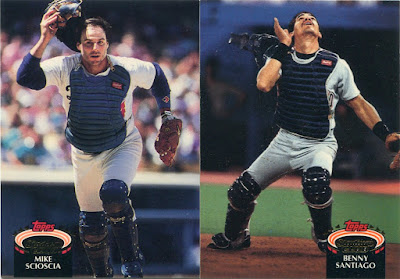 When it comes to baseball cards, I'll take catchers in action over any other position on the diamond. 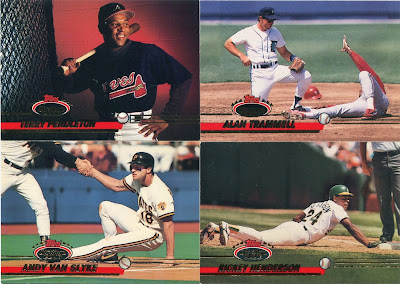 This mega box went heavy with the '90s Stadium Club, which was, of course, fine by me.

SC is obviously strong all around, but I've always enjoyed the horizontals a touch better than the verticals. Some cards just need that landscape orientation for full effect. 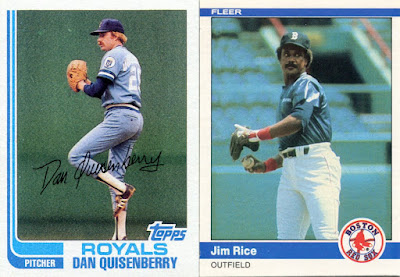 A couple of the boxes-within-the-box were almost exclusively comprised of early '80s singles.

I've dug up most of what I need from that era at this point, but, every once in a while, I'll discover new ones that had somehow flown under my radar. These two were in that mold, and were most certainly welcome additions to my binders. 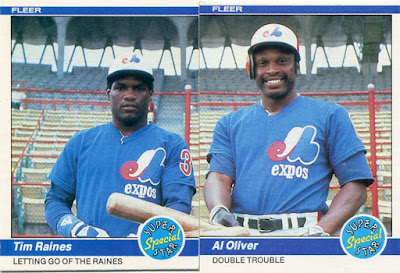 ...one of the cards in this monster helped complete a long-awaited combo for me.

I'd long had that Al Oliver "Superstar Special" in my collection without ever obtaining its other half. I didn't even know who it was, to be honest. Turns out, the missing link was Tim Raines himself.

This box finally completed the pair. 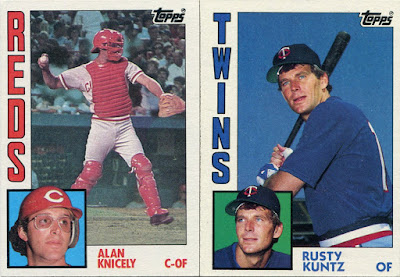 Here's a couple of gems from '84 Topps that were all new to me.

The Alan Knicely (no, I've never heard of him, either) is a fine night shot, and you know I can't pass up the opportunity to post a Rusty Kuntz card. 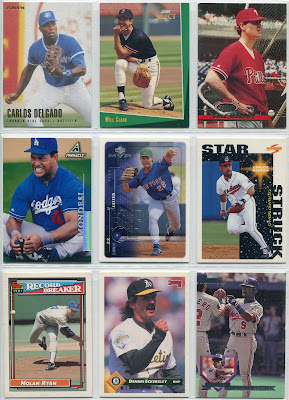 These nine cards don't have much in common, but there is a reason I showcased them together in a page.

You may be able to tell from the photo at the top of the post that this mega box included a smattering of nine-pocket pages. Such a sight made me nothing short of ecstatic because, as a binder guy, I can tell you that I am always, always, always in the market for those.

But, as if that stack of about 80 nine-pocket reinforcements wasn't enough, there were also cards in them. Some of what I've shown already came from said pages, as well as each and every one of the nine you see above.

Extra nine-pocket pages and cards...talk about killing two birds with one stone. 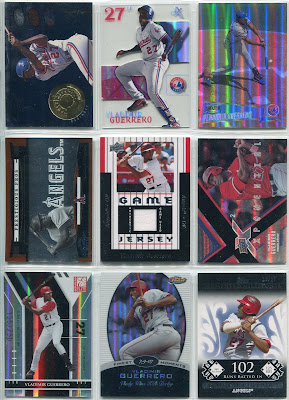 You may also notice a small case of cards in the top-righthand portion of the introductory photo.

Those were all hand-picked Vlads from Wes, and I needed a good portion of the ones he selected. Many were numbered and/or otherwise tough inserts to find, and one was even a jersey cards that I actually liked, mimicking the groundbreaking '97 UD Game Jersey design.

Normally, it'd be almost impossible for anything to top such a brilliant assortment of Vlads... 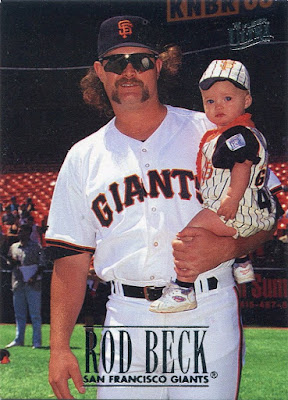 ...but I think big Shooter and little Shooter may have done it.

This masterpiece fell out of one of the aforementioned nine-pocket pages, and I'm not sure whether it was specifically planted there as a result of my newly-declared Rod Beck project or merely a coincidence.

Either way, I think it may well be my new favorite card in my budding collection of his. I've said it before, and I'll say it again...but I'm sure not exactly sure what took me so long to start collecting the guy.

So that just about does it for the singles that fell out of this colossal flat-rate whale, but, as you may have guessed, there was a whole other component to this box that I'll be recapping in Part Deaux of this mini-series.

I'll leave you with the assurance that, yes, I survived a patented JBF mega box, and yes, I am alive and well.

A little scarred perhaps, but well.
Posted by Nick at 5:28 PM

Wow, this is definitely a "But wait, there's more!" situation. Looking forward to seeing the rest (and I'm particularly intrigued by the Topps Super "Home Team Series" packs).

You should be on the look out,the joining of those Fleer Oliver and Raines cards may have opened a secret portal leading to an alternate universe where the Expos are still In the National League and In first place ;)

The legend of Beck continues.

I just want Jacob DeGrom to say his hair was inspired by Beck.