Talking shop and another LCS visit 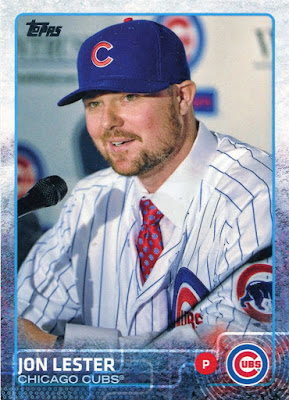 Some of you may remember my shock of actually finding a decent LCS around these parts.

I took another bus ride up there yesterday because Brian, a loyal reader and the fellow collector who I met during that first LCS trip, wanted to meet up there for a second card store run since he's moving to Milwaukee within the next week or two.

Brian wasn't in the shop when I got there, so I took it upon myself to start doing a little digging. The first time I hit this store, the guy had a dollar binder behind a glass case. This time, he had a dollar box out in the open.

There were actually a handful of dollar-worthy cards in there, which is more than I can say about a lot of other dollar boxes I've seen, LCS or not. I started pulling a few cards out when I remembered that a) I'm supposed to be saving money for the National and b) I had less than ten dollars in cash in my wallet at the time.

I didn't end up buying any of the dollar cards, although I can always pick them up during my next trip there. That's part of the beauty of a good LCS.

Instead, I asked the shop owner to see the quarter Cubs and White Sox binders he has stashed behind the counter, hoping he might have a few new additions to look through. 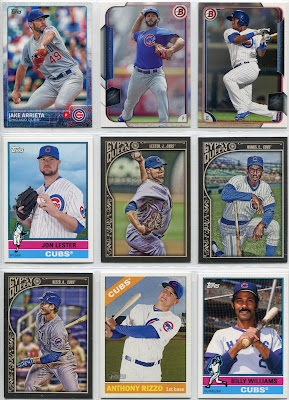 The first dozen or so pages had about seven or eight copies of each Cubs/Sox Series 2 base card, and there were handfuls other 2015 singles spread throughout. If my first visit to this LCS had me eager to return, this this second trip made me a regular customer.

All I can really ask from a card shop is to have the new stuff in stock. A lot of other LCSes I've been to still have packs of 2007 Topps displayed behind the counter as if they're the latest and greatest product. I'm not expecting dime boxes as far as the eye can see, but I'd at least like to be able to pick up singles from newer sets.

I don't think that's too much to ask out of an LCS. 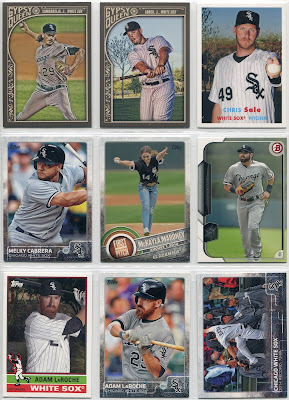 Thankfully, it wasn't for this one.

While I'm sure there'll be quite a few vendors at the National with boxes of 2015 singles on display, I decided to drop some quarters on various Series 2/Archives/GQ Cubs and Sox yesterday. (Most card show vendors separate out the hometown teams and jack up the prices anyways.)

The lot I picked up included (among other things) my first three cards of Jon Lester as a Cub (including the outstanding Series 2 press conference shot that might wind up on my "Cards of the Year" countdown), my first Addison Russell, a couple Rizzos, my first singles of Adam LaRoche as a South Sider, and a "First Pitch" McKayla Maroney.

Because I guess I've decided that I'm going for the entire "First Pitch" set now. 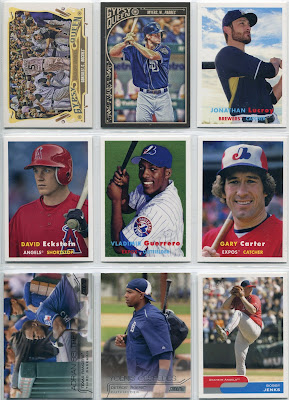 After seeing all those 2015 Cubs and Sox, I figured the owner would have to have a few other miscellaneous 2015 singles available.

He only had a small stack at the ready when I asked, so I figure he sells most of his other 2015s online or something. No matter, because I did find quite a few I needed from the miscellany. But, like the dollar cards, I again had to remind myself that I couldn't buy every single one. (These were also a quarter per.)

I settled on about nine or ten "must-haves" from that pile (the Bazooka Jenks was actually from the Sox binder, but I needed it because of its "zero-year" status). The sight of players like David Eckstein and Vlad as "old guys" in a set like Archives made me feel ancient.

All in all, I ended up forking over eight bucks for the whole haul, which is about as good of a day at the LCS as I could ever want. 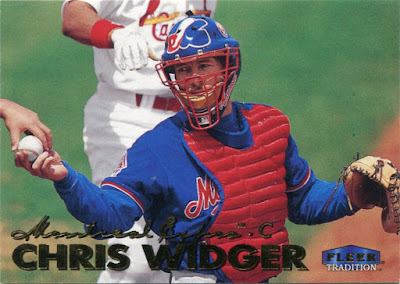 Even after all my digging was done, Brian still hadn't shown up.

Turns out that between a big move and a young toddler like Brian has, things can get a little hectic. Brian invited me to swap cards and talk shop at his apartment instead, which was only a few blocks from the LCS.

I went over, and, although the first thing we did was give each other the cards we'd set aside, the visit was far about more than just trading. Brian was an extremely gracious host and was even nice enough to show me a few of his binders. He's a big TTM guy, and he had by far the best autograph collection I'd ever seen.

It didn't dawn on me until I was on the bus home, but it was the first time I could remember that I'd dug through the collection of a seasoned card collector. Brian's been collecting for longer than I have, and, after looking through the jaw-dropping amounts of autographs he's accumulated, it certainly shows.

But, yes, as I mentioned, the two of us did trade some cards, and Brian put together another awesome stack for me. 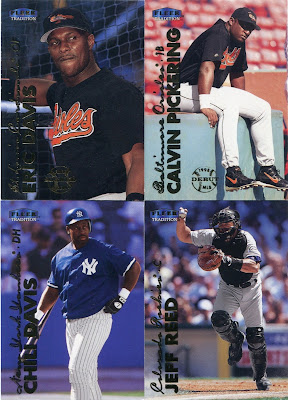 Like our first in-person swap, Brian dropped quite a bit of 1999 Fleer Tradition on me.

Brian is one of those rare collectors (like myself) who collected through his college years. He didn't know it then, but the fact that he opened a lot of '99 Tradition at the time was extremely beneficial to me, in an oddly selfish way.

These types of late '90s issues can be difficult to track down, and you often need someone who was there first-hand to find them nowadays. 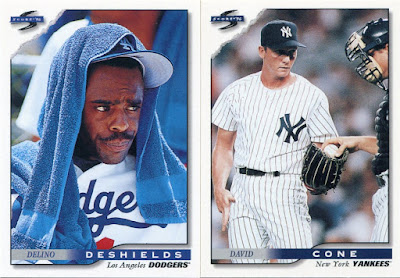 Again, like our first trade, I found a good amount of 1996 Score in this stack.

I've said it before, but I've always found this to be one of Score's more underrated efforts in their long history.

Even towel-on-the-head shots have a certain charm on this design. 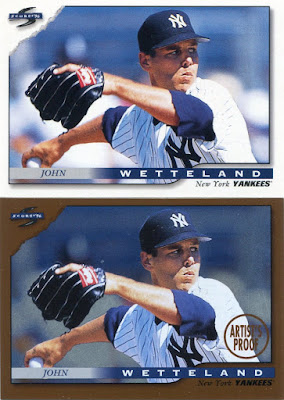 Brian even included a couple base-parallel combos, which is always a treat for this self-proclaimed binder guy.

The beauty of cards like these side-by-side in a nine-pocket page will never go away. 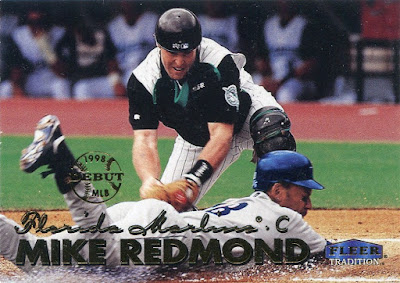 Brian even jumped aboard the mini-collection bandwagon as well.

Here's a play at the plate featuring Mike Redmond (with a Moises Alou cameo) from his playing days with the Marlins in the late '90s.

Little did he know he'd be unceremoniously canned by the club as a skipper about fifteen years later. 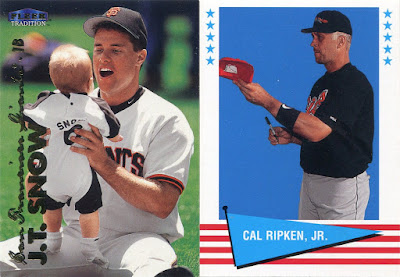 Another couple mini-collection hits from '99 Fleer Tradition (the Ripken is an insert designed to replicate one of Fleer's old designs from the '60s.)

I actually ordered that adorable J. T. Snow in a past Just Commons batch, but the one they sent was the Millennium parallel. Now, thanks to Brian, I'll be able to add the standard base card to my collection. 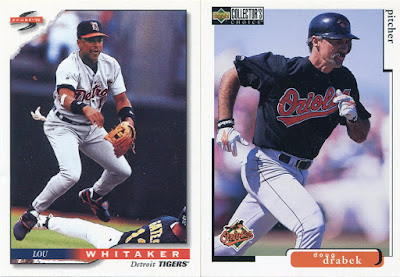 A couple for the "double dip" and "pitcher at the plate" archives.

The Drabek is a rare American League variation on the latter. 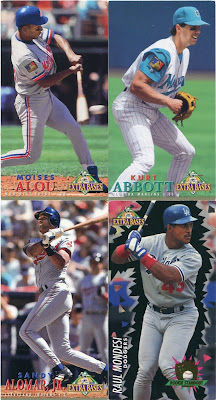 Also among the madness were a few of these oversized Fleer Extra Bases singles.

They obviously don't fit in my nine-pocket pages, but they do make for nice display pieces on the fronts of my binders.

A toast to oversized cards. 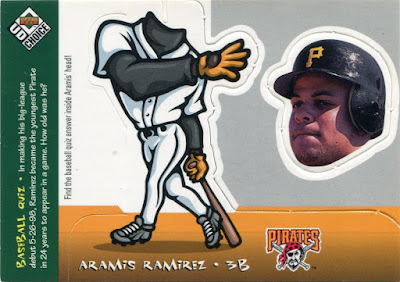 Here's a headless Aramis Ramirez, a guy who, as I just found out, was dealt back to the Pirates this afternoon, the spot where his career began back in the late '90s.

I was planning on posting this card anyways, but now at least now I have a reason besides the horrifying baseball card decapitation seen here. 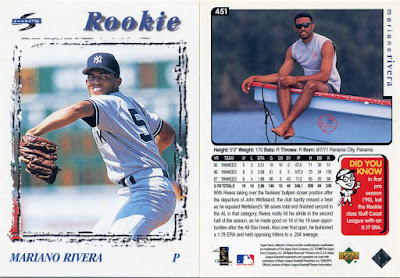 Brian tracked down a couple early Mo cards for me as well.

Including one of him on a Yankees-christened boat, for some reason. 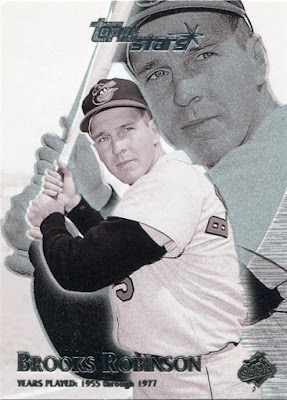 To round it all out, here's a fantastic black-and-white card of The Human Vacuum Cleaner himself.

Brian tells me that there's some decent card shows up in Milwaukee, so maybe I'll shoot up there one of these days and pay him a visit. (All the best on the big move, Brian.)

Yesterday, I got to spend some quality time in an LCS, knock out some 2015 needs, complete an in-person swap, and talk shop with a fellow collector. All in the span of a few hours.

That's a stellar day of collecting, if you ask me.
Posted by Nick at 6:03 PM

Now I know what you meant when you said yesterday was the best day for you as a collector ever ;).

I love those UD Choice Bobble cards, but I have yet to actually assemble one.

Of your '99 Fleer Traditions, I don't suppose one of them is Mike Fyhrie? I've been trying to track that card down for ages.

Rivera always had some good fashion choices on his cards.

I had a great time, too, Nick! Glad you were able to hang out for a while. Definitely reach out when you make it up to Milwaukee and maybe we can catch a Brewers game and/or a card shop! (Life won't be as hectic, I swear...)

Nice finds. Come to Cincinnati or Dayton some time and I know a really nice shop with a ton of boxes to dig through.