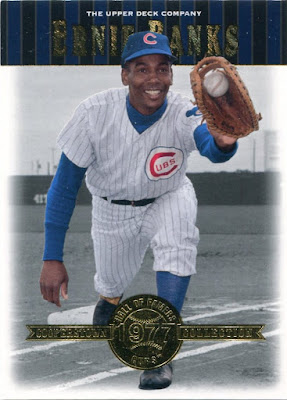 I don't think I ever announced it on the blog, but this had been my new Wallet Card for the past few months.

I emphasize the past tense in that sentence, because I no longer own it. Mr. Cub has a new home now, and I'm sure it'll be a happy second life for him.

See, one of my teachers for my two-week summer college course brought her son (eleven, maybe twelve years old) to class one day last week because I'm guessing she couldn't find a sitter. And, wouldn't you know it, the first thing the kid dropped on his desk was a binder of baseball cards.

I could see him flipping through his collection as our class got started, and, when we broke for lunch, I asked my teacher how long he'd been collecting. She said he'd just started a short time ago. My teacher must've told her son, because he brought his binder over to show me before class started again in the afternoon.

The decision to give him my Wallet Card was a no-brainer because a) this Mr. Cub is a dupe for me, and, far more importantly, b) as a collector, I see it as my duty to get younger people into this hobby whenever and wherever I can.

His eyes lit up, and the Banks went into the first slot on the first page of his binder. 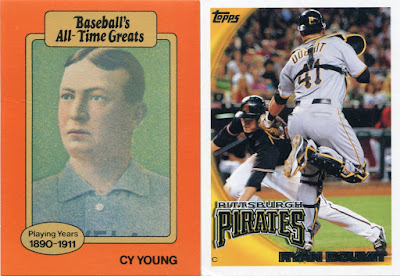 He even gave me a couple cards in return to complete the "trade," if you will.

The kid has a good eye, because I would've actually needed both of these if I didn't have them already. Even so, they'll take their places as my two new Wallet Cards, if the rules allow for such a thing.

I can't tell you how much of a kick I got out of talking baseball cards with a young collector. He had a nice collection going (he told me he'd been buying repacks from Target with his allowance), and even had a few cards I was jealous of. (A 2015 Stadium Club Kershaw, for one.)

It warms my heart to see the younger generation getting involved in the hobby, and, on a more personal level, it was the first conversation I'd had about baseball cards in a while. 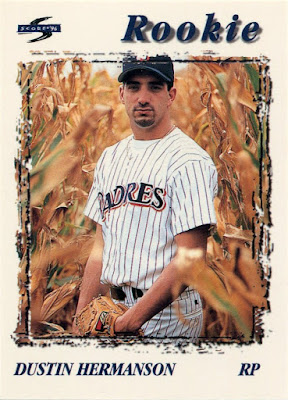 I've gotten past most of my minor insecurities about this hobby in the past year or so.

More people probably know I collect now than ever before. This has its upsides and its downsides. I get to discuss my hobby with more of my peers, but, then again, I often find myself getting asked the questions I've been fielding for a long, long time.

The answer to the first is easy...T206 Honus Wagner. The second, not so much. Since we bloggers know better than to let Beckett assess our collection, it's nearly impossible for most of us to determine a single card with the most "value" to us. I've really never had much of answer.

This 25-cent common of Dustin Hermanson in the cornfields means more to me than a lot of my other, seemingly more "valuable" pieces of my collection. 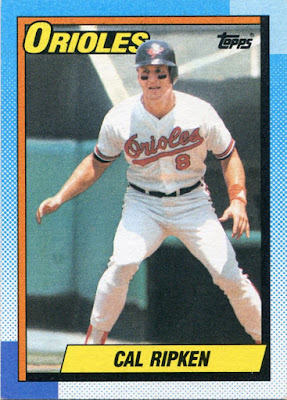 When other people know you collect, other people start asking you if the cards sitting in their attic are worth anything.

I was recently at lunch with a few people from one of my English classes, and, somehow, I got onto the topic of baseball cards with one of them. He was genuinely surprised when I told him almost everything from the late '80s and early '90s was basically unsellable. (Although he did say he had an '89 UD Griffey when he was a kid.)

I don't mean to sound all high-and-mighty by saying this, but almost everyone who doesn't collect thinks a 1990 Topps Cal Ripken is a goldmine. Can you blame them? Cal Ripken is a big star. That should equal money, right?

I hate to be the bearer of bad news, but...not really. 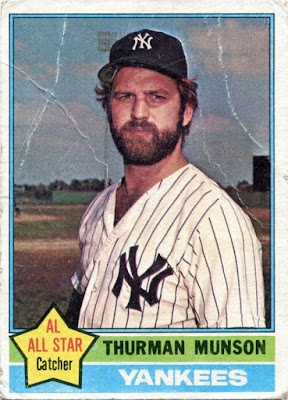 This is not to say that card shows are any better for conversation.

Yes, there are friendly vendors, and I love nothing more than to chat with them while perusing cardboard. But, at least from my experience, the vast majority of people at shows (vendors or customers) are either silent or talking about something that doesn't pertain to me.

It's especially true with vendors. I've lost count of how many times I've heard gripes about how bad business is or how they're going broke or how their card got graded an 8 instead of a 9. (All while I'm buying cards with 832 creases on them.)

Aside from talking with my dad, there isn't much dialogue in my card show days.

Although hopefully that'll change at this year's National. 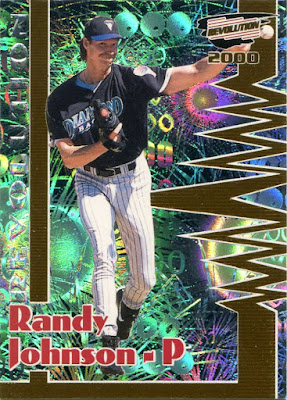 In a lot of ways, it's a good thing I have this blog at my disposal.

All these random card-related thoughts would boil over and explode out of me without it. I can write whatever I want here. Tangential thoughts about shiny cards, zero-year cards, sunset cards, any kinds of cards. This is the beauty of blogging.

But, every once in a while, it's nice to have an in-person discussion about this wonderful hobby. A discussion where topics like value or grading or They still make baseball cards? are nowhere to be heard.

That's what I was lucky enough to have on that fateful afternoon last week, and there's nothing quite like contributing to the collection of a new collector.
Posted by Nick at 6:05 PM

The other common question I will get from non-collectors or lapsed collectors is "What is your oldest card?"

My stock answer for that question is usually, "tough to say what's my most valuable, really. A lot of cards mean a lot and have value to me when no one else would want them."

In other words, I gave them a lawyer answer of "it depends."

Maybe you should offload some duplicates to your teacher's son?

I gave a bunch of my Pirates dupes to Kate's cousin's son when he was in town over Christmas. He's 14 or 15, and was amazed to see some Barry Bonds commons that were older than he was. When he spotted the couple of low grade 1960's cards I had in the box, he looked like the happiest person on earth.

With that said, I'm still pretty conservative when it comes to discussing cards in public. A few of my old roommates from college knew I collected, but it's just not something that comes up, nor something I bring up, very often.

Cool story Nick. You should tell him about your blog.

Great post, so nice to hear that at least a few younger kids from a new generation are still into collecting.

Great read as usual Nick ;)I would love to get more inner city kids collecting.Growing up,I remember most corner stores,gas stations and supermarkets had packs of Topps baseball cards,comic books and the ocassional action figure.You dont see that anymore.

"What are you going to do with all those cards?".
*sigh* "Keep adding to them until I don't want any more" is technically the answer, but I never say that.
The other one you hear other people say about you is that you're "playing with your cards". I hate that too. I'm not playing, I'm enjoying, perusing, researching, sorting or shipping out cards...

Very cool. I can't remember the last time I saw a kid carrying around a binder of cards... but that's very, very, awesome!

Last week I passed out stacks of cards to my 5th graders. Tons of kids wanted them the first day. A few asked for them the next day. This week? So far nobody has asked :(

It'll be interesting to see if any of my students start collecting. Worst case scenario... at least they were exposed to the hobby for at least a brief moment.

In one of my baseball card Facebook groups, a Wrigley Field usher asked for card donations so he can pass them out to kids at Cubs games. I gave him a bunch of my junk wax to keep the hobby alive. He said there a bunch of ushers who do this at Wrigley, so there's still hope for cardboard.

Awesome post. And I will admit that it's hard to find people to talk about baseball cards with. Usually I just steer it towards baseball in general since that itself is a bit more inviting to others.