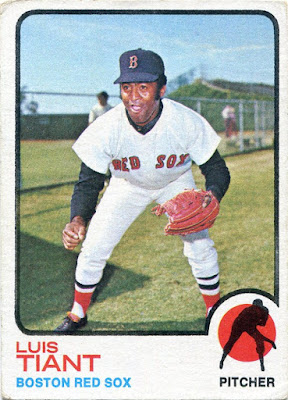 Some ballplayers are simply impossible to dislike.

I think it's safe to say Luis Tiant belongs in that fold. In all my years of being a baseball fanatic, I've never heard anyone say a bad word about the man.

The guy had perhaps the most entertaining delivery of anyone not named Chad Bradford, and he was one of the most fun-loving personalities the game has ever seen.

And, while some of baseball's most entertaining figures may not have had spectacular baseball cards during their respective careers, Luis Tiant most certainly did. I mean, just look at the shot on his '73 Topps issue. Red glove, in fielding position, a fabricated, wide-mouthed expression of surprise on his face.

After seeing this card, I want to have a beer with Luis Tiant...and so do you. 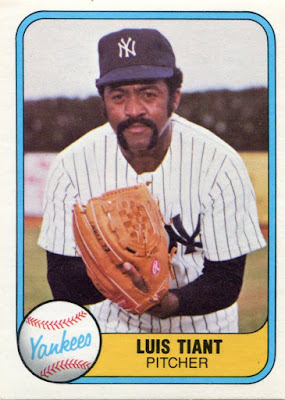 The Red Sox weren't Tiant's first team (Indians) or his second (Twins), but he is forever linked with the immortal Boston organization.

They virtually picked him up off the scrap heap in 1971 (he'd been released by both the Twins and Braves earlier in the year) and gave him a chance. Tiant rewarded them by becoming one of the more dominant pitchers of the '70s, transforming himself from a fireballing strikeout machine into a crafty finesse pitcher.

"The Pride of Havana" would enjoy eight successful seasons with the Red Sox before signing with the Yankees as a free agent in 1978. He pitched 55 games in the Bronx over two seasons, but never quite looked right in the Yankee pinstripes.

Aside from a cameo on Mike Easler's 1982 Fleer issue, this is Tiant's final Fleer card.

In reality, though, he still had two more stops to make before his career would come to an ultimate end. 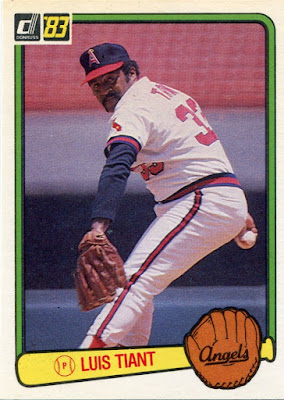 But it's hard to fault Fleer for ignoring the final two years of his career. After appearing in just nine games with the 1981 Pirates (and receiving his only card as a Pirate from Topps), Tiant closed out his career with a brief six-game stint for the '82 Angels, going 2-2 with a 5.76 ERA in that span.

While Donruss was nice enough to give him a final ride into the sunset in their 1983 checklist... 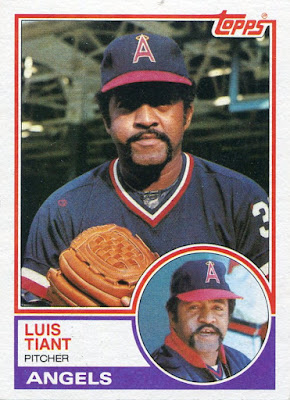 ...this is my far-and-away favorite of Luis Tiant's cardboard finales.

It's always a treat when players wave goodbye on memorable Topps designs, and that's exactly what happened with "El Tiante" in 1983. Action shots are nice, but I tend enjoy the classic poses on final cards a bit more than the others. I want to get one last look at the guy before he goes off into the sunset.

If nothing else, it's good to know that Tiant was still making the Fu Manchu last up until his final years in the big leagues.

Then again, would you expect anything less from him?
Posted by Nick at 6:00 PM

As a little kid in the late 1970s, I loved trying to imitate his truly inimitable herky-jerky pitching motion. If you have never seen it, try to find it on YouTube. There's no way that pitching coaches today would have let him get away with that...individualism.

As kids growing up in Boston. Everybody copied his motion. You would even see someone break it out in a little league game. I actually got to play against his son in a tournement. Had the same name as his father. I remember I got a hit and got to tell everyone that I got a hot off of Louie Tiant

Out of the 50+ player collections I have from the 60's and 70's, Tiant is my number one favorite guy. As cool as he was on the field, it sealed the deal when I saw that video of him returning to Cuba all those years later and how much his family meant to him and he meant to them.