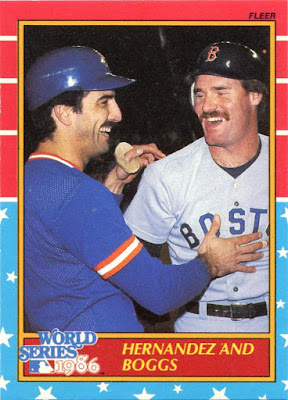 It's a little hard to believe, but I'll be attending the National with my dad a week from tomorrow.

As is the case with every card show (and especially the National), I've been making a list in my head about the specific goals I'd like to accomplish. I've actually had a good amount of success with such lists in the past, which is surprising considering my scattered way of collecting.

But, before I get to that, I wanted to inquire about a possible meetup for any and all bloggers that will be at the National on Saturday (August 1st). We can talk shop, swap cards (if you'd like, think of the shipping money you'd save!), and hopefully even share a good dime box dig.

Let me know via email or in a comment and let's see if we can't get an "official" National blogger meetup together. It'd be nice to put some names to some faces around here.

In the meantime, let's check out my personal checklist for this year's big event. 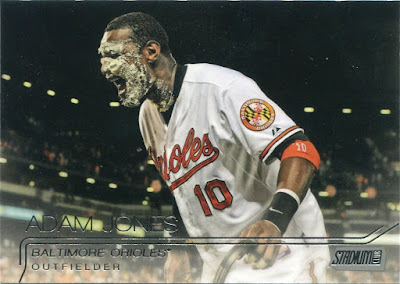 My largest and most specific goal for the 2015 National is to pick up some 2015 singles on the cheap.

Series 2, Archives, and (if the big vendors have busted/sorted it by then) A&G are all high on my list, but the one thing I'm really, really hoping to stumble upon at the show is a dime box of 2015 Stadium Club.

I've had good luck with finding the case-busting vendors in the past, because the dime/quarter (but hopefully dime) base cards are just another way to recoup a few extra bucks.

And it sure saves me a ton of money on three-dollar retail packs. 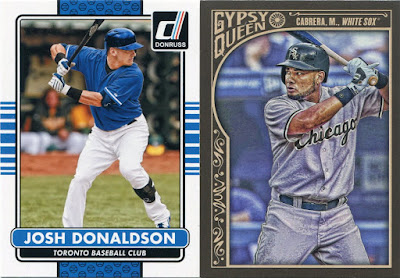 This is kind of an addendum to my first goal, and one I've failed to live by in my prior card show experiences.

I've been on record as disliking Donruss and GQ quite a bit, and, yet, I've often found myself coming home with stacks and stacks of cards from the brand from past shows. Yes, they might only be a dime each, but that can still add up after a while.

I blink and I've dropped north of 10-15 bucks on sets I don't even like. With a fairly limited budget like mine, that's a decent-sized chunk. At the National, I need to stop myself and only go after cards for my top-tier player collections.

Nick, you can live without your 236th different Chase Utley. 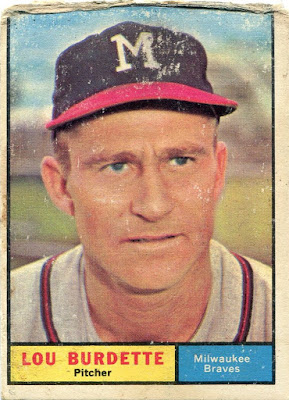 With my budget, I probably won't be looking to make one big splash at this year's National. (Although I'll certainly consider it if the price is right.)

I'm more of a discount vintage type of guy, anyways. Stacks of loved, one-to-two dollar vintage are more my game. Maybe not as beat-up as this Lew Burdette, but you get my drift.

Actually, heck, give me cards like Lew if they're available for pocket change. 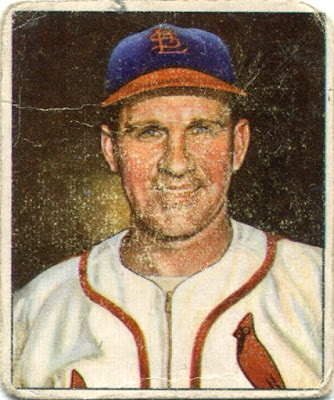 This is a new goal of mine, and one that'll depend on how the vintage dealers price their inventory.

I don't own as many pre-1952 baseball cards as I'd like, and I'd like to change that at this year's National. I'd say my main goal is to pick up my first 1951 Topps Red/Blue Back, but I certainly wouldn't scoff at an early Bowman, Play Ball, Goudey...or perhaps even a cheap T206 issue.

Hopefully (at least) one can be mine if the price is right. 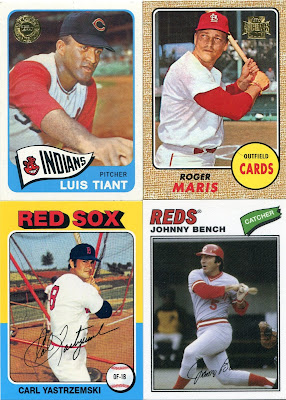 I never used to chase specific cards at shows.

I tried it out for the first time a couple years ago, and, since it worked well, I've been doing it ever since. I usually only target one or two cards per show, but, since this is the National, I've expanded it to a quartet.

That quartet is as follows...1965 Topps Luis Tiant rookie, 1968 Roger Maris (his "sunset" card), 1975 Topps Yaz, and a 1977 Topps Johnny Bench. The Maris would probably be the most expensive of the lot, as anything Maris-related tends to carry a high premium.

In reality, I'd be happy to walk away with two of the four next Saturday, though the entire quartet would definitely be the ultimate score. 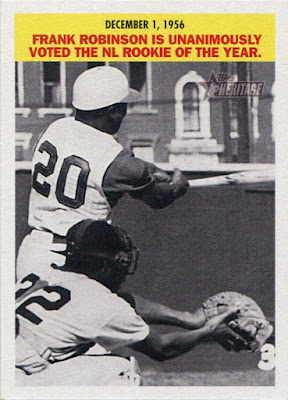 This is a new rule I'm going to try and follow at this year's National, and the key word there is try.

If I can, I'm going to limit myself to spending no more than $20 during my first trip to any single table on Saturday.

If I happen to have money left over at the end of the show, I can always go back and make a return trip to certain vendors. But, with the sheer size of the place, I don't want to blow a third of my budget at a single table and then be broke before I reach the final aisle.

Now, obviously, this is easier said than done. I might make an exception if I find a vendor with an inordinately large selection of 2015s on display. And it'll be difficult to try and drag me away from an unfinished dime box dig if I already have $20 worth of cards picked out, but, God help me, I'm going to try and do it. 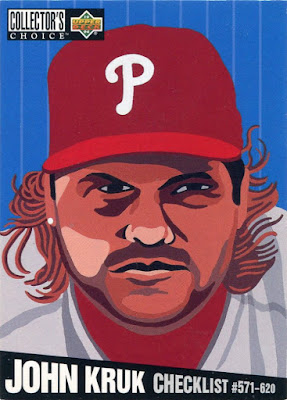 This should be obvious, but I'll say it anyway.

I'll be doing some dime box digging next Saturday. You'd think that a big-dollar gathering like the National would be lacking in cheap stuff, but, having had prior National experience, I'd say it's nearly the opposite.

Some of the best dime boxes I've ever seen came courtesy of the National. Perfect combos of fun cards, scary cards, and jaw-dropping cards. (The Kruk is a combo of all three.)

And, as if you needed any more incentive for a dime dig, dime boxes are strictly a bro-free zone, which is more than I can say about most of the other parts of this show.

Yes, sir, there's still a place for the low-end collector at the high-end National.

As one who may never make it to the National, I can't wait to see what you uncover.

Cross the 75 Yaz off your list. I'm mailing one out to you Monday. Have a great time digging at the National

Have a great time at the Convention when you do go. I wish I could make it -- but it won't happen this year. I'm hoping they bring it back to Atlanta again soon.

I mentioned it on my blog as well, but I will be at the National. My bro lives in Chicago, so I will be in the City starting Wednesday.
I'm definitely down for a meet-up!