Trading with the family, biologically and not 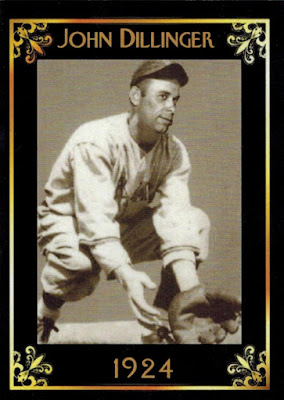 This quarantine has forced me into a notable blogging first: I made a trade with my dad!

With social distancing and mask-wearing and all, I haven't been able to see Dad in the flesh since this whole Covid thing started, which obviously sucks. But nothing, it seems, can stop his usual card-giving ways, since he's taken to sending me cards in the mail as of late. Not long after I mailed him his latest collection of Music Cards from Gavin, I found this strange custom my dad had somehow stumbled upon and purchased online (the design reminds me of one of my all-time favorite oddball sets, now that I think of it).

John Dillinger is a rather infamous figure in Chicago's crime-filled lore, and growing up around the city you can't help but hear his name quite a bit -- but I still had no idea he once played minor league ball! 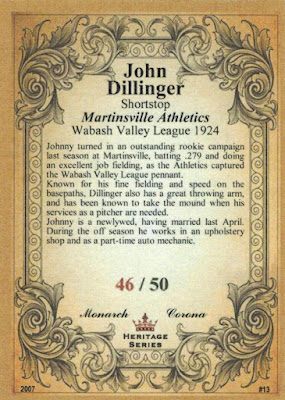 I've never heard of these customs before, but they sure do feel and look like actual baseball cards, complete with outstanding backs!

I particularly like how this bio is written in the present, as it was for Dillinger in 1924, way before his crime sprees in the days when he was an everyday newlywed and auto mechanic -- certainly a card I never thought I'd have in my collection. 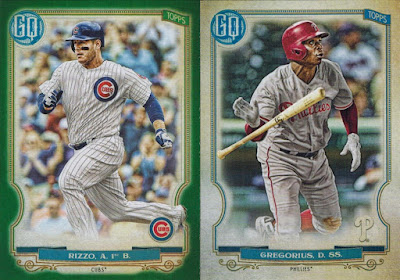 Dad is still working his vendor gigs at Target, stocking cards and other items for people who haven't stopped their retail-buying ways amidst the quarantine.

Thankfully, Dad always manages to pick up a few packs of whatever he stocks before the retail hounds can get to 'em, which was the basis for another envelope he sent me in the mail recently with the contents of a few 2020 Gypsy Queen packs he snagged.

I still don't much like GQ, but I'm thankful to open packs of anything in these strange times -- stuff I actually need, like a Rizzo parallel and my first card of Sir Didi on the Phillies, are pure bonuses. 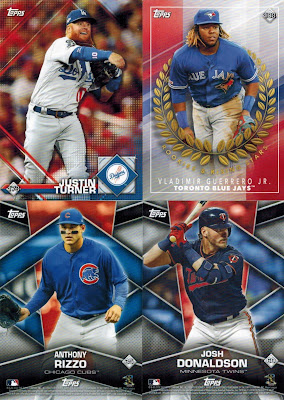 For me, the biggest surprise of the limited 2020 card calendar this far has been Topps Stickers, because I have to say I actually like these...a lot.

I don't know how much of that is due to having almost no other current products out there right now (probably at least a little bit). But when I've had to go to Target for groceries as of late I've always thrown a few packs of stickers in my sanitized hand basket. They're cheap (99 cents a pack!) and good for a little innocent fun, plus the design is kinda nice and way more colorful than anything else Topps has put out this year. Dad's even sent me a few sticker packs through the mail as well.

I used to not like that Topps puts two different guys on the front and back of each card (it's weird pulling a card of Anthony Rizzo with some random dude like Gary Sanchez on the other side) but I've had a good amount of fun mixing and matching the stickers and backs as needed -- even though it tests my OCD, I guess as long as the guy on the flipside isn't a "binder guy" I can consider it an Anthony Rizzo card, and only an Anthony Rizzo card. 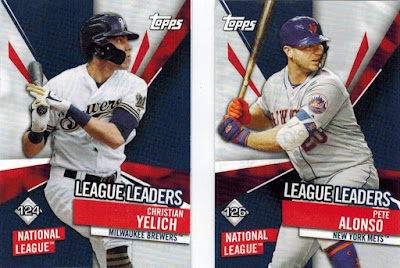 And hey, these stickers even brought out the extremely small crafty side of me as well.

These League Leader stickers come two per card, and since I don't have much use for them that way, I stuck them each to separate pieces of scratch paper to create, voila, two DIY mini cards! 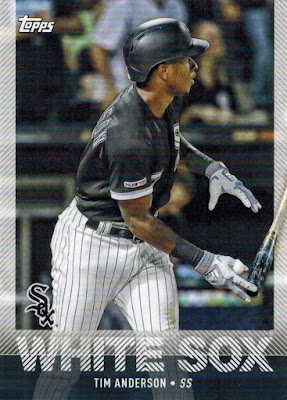 In addition to Dad's cards, I've also received a good amount of PWEs from my non-biological (or so I would think) blogging family over the quarantine months as well.

I was victim to another Zippy Zapping from "Torren' Up Cards" that included my first 2020 Utz card (still have yet to find these in the wild here in the Midwest), and I'll be the hundredth person to say that I like these way better than the actual 2020 Topps design. 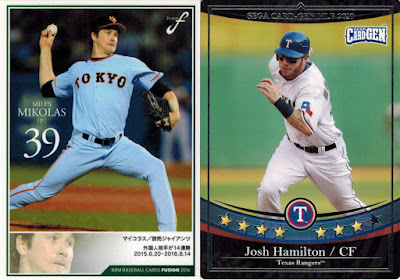 It's a fact that 100 percent of the Card-Gens I own have come via Zappings, and that Miles Mikolas is way cool since, a) I've become a big fan of his, and b) he basically resuscitated his career in Japan after a first failed stint as a US prospect. 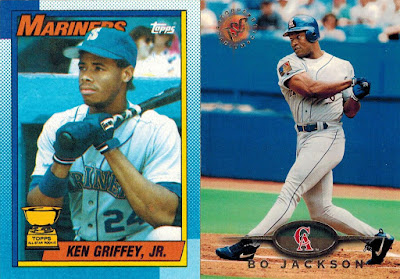 Not one, but two Dime Box Dozen needs recently arrived in an envelope from Tom at the "Angels in Order" blog -- makes sense that he'd be the one to send me that Bo (a Short Term Stop/Sunset combo!).

Also I probably own more stuff from 1990 Topps than any other single set of baseball cards, so how in god's name I didn't already have that Griffey is beyond me. 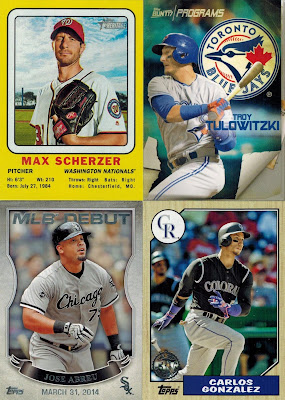 Tom was nice enough to throw in a few recent insert needs along for the ride as well -- I've said it before but I still get way too much pleasure out of the simple task of deleting cards from my want list tab. 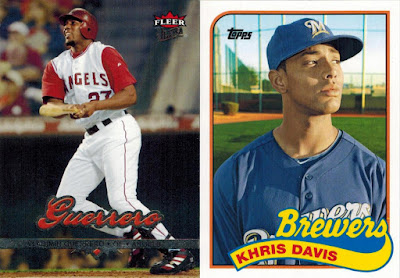 Coincidentally, another blogosphere Tom recently sent me a PWE as well that had a pair of Dime Box Dozen needs inside -- this one came from Tom of "Waiting 'til Next Year" fame.

I had the gold parallel of that Vlad without the base version (ugh!) and the Davis is a fairly common base card I somehow hadn't yet added to my new collection of his. 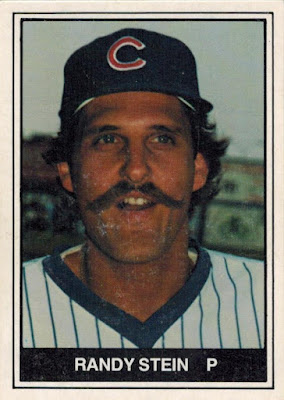 Tom sent this random piece of minor league greatness along as well -- I have no idea who Randy Stein is (apparently he's a four-year big league veteran who played in six games with the Cubs in '82), but that is one SWEET 'stache.

Between cards of John Dillinger, Dime Box Dozen needs, and handlebar mustaches, you just never know what someone might stuff into a PWE -- whether they're biologically related to you or not.
Posted by Nick at 5:54 PM

Nice "trading" with you!

I like the connection you have with your Dad. I get a kick out his top hat too, every time he comments. I usually like GQ but find this year's design boring. That won't keeping me from wanting a few singles, like that DiDi with his floating bat!

Didn't know that about Dillinger.

Dillinger wins the top baseball trivia award for today. That's really cool that you and your dad send each other cards. I could never get my dad into cards. Kinda surprised... since he loves to buy and sell stocks.

I already knew of Dillinger's baseball career, but still love how that back was written, the whole not mentioning a word about his future notoriety thing was a nice touch.

Considering how the Yankees (then the Highlanders) were owned by two pretty prominent people (read: a casino owner and a police chief) with ties to Tammany Hall, the Dillinger card just makes me wonder how many people in baseball's past have ties to that kind of world. Probably more than baseball is comfortable admitting.